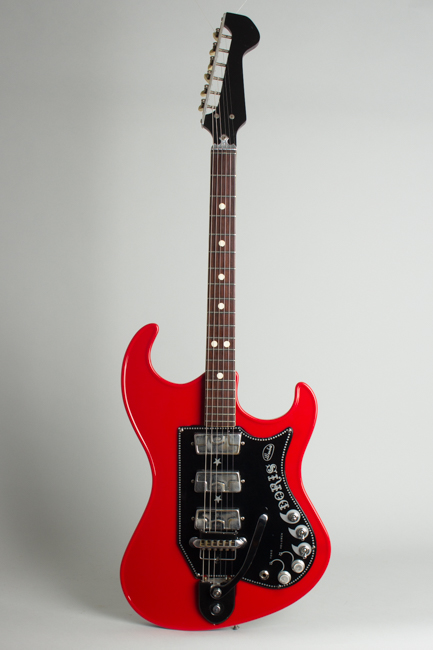 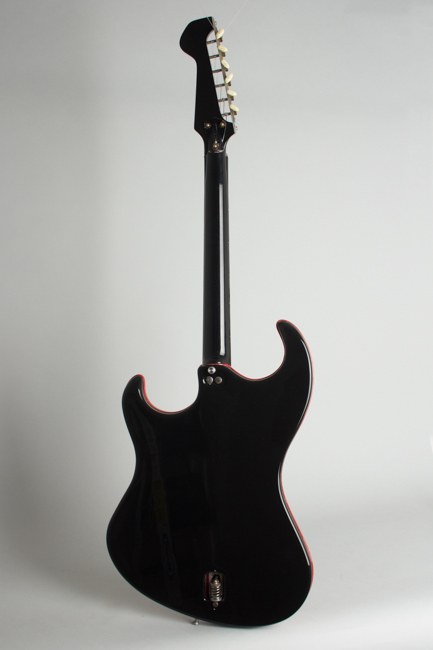 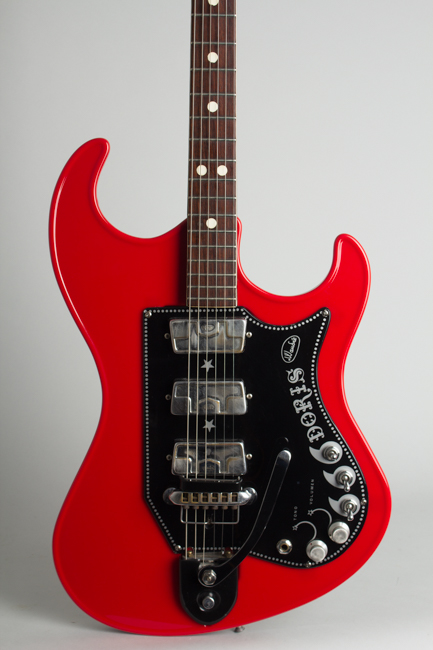 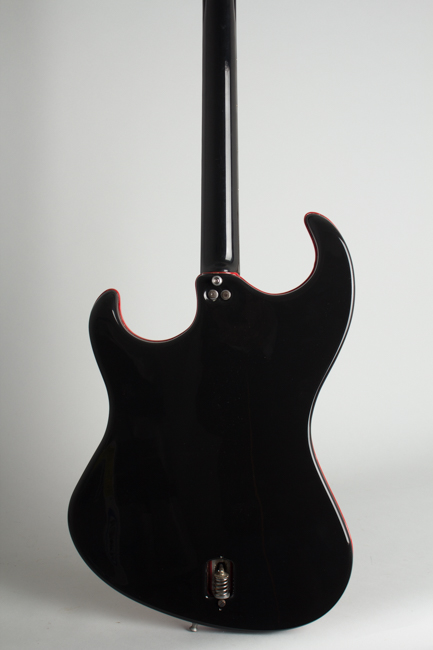 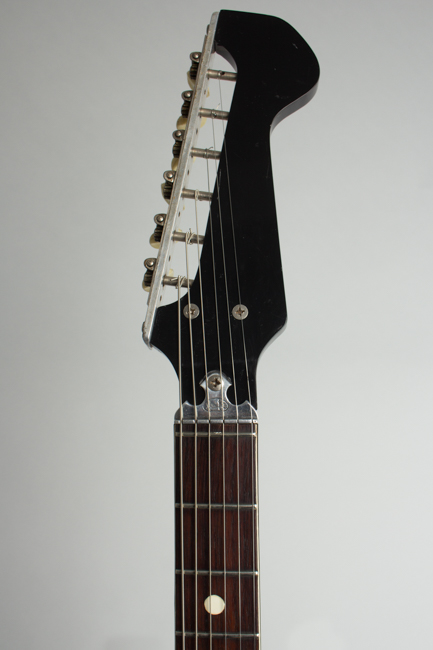 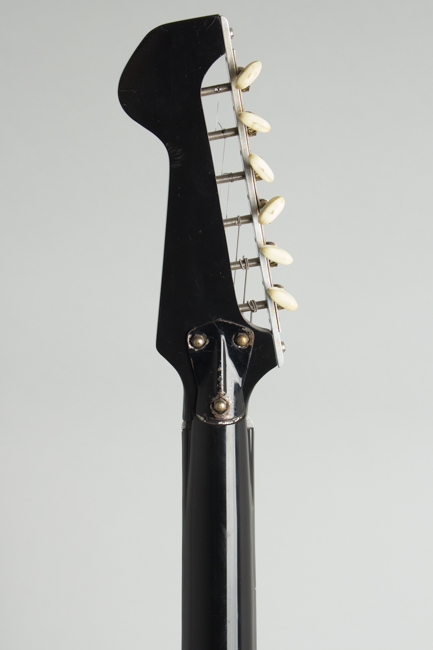 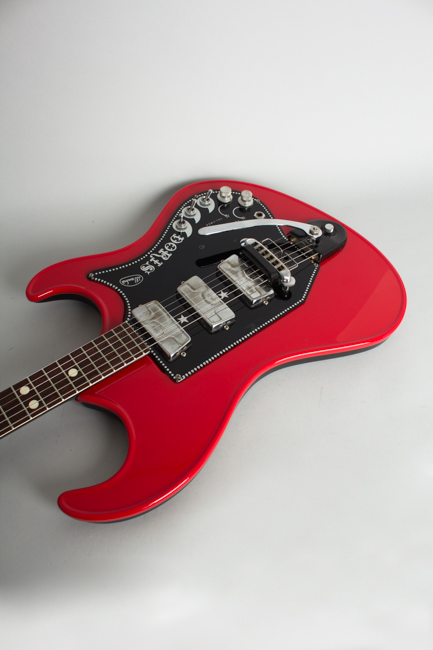 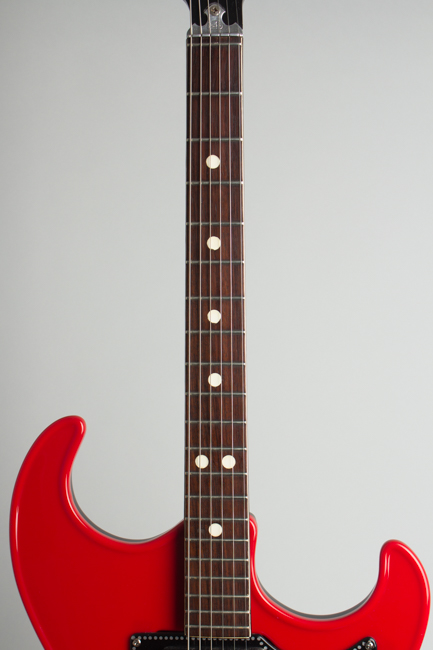 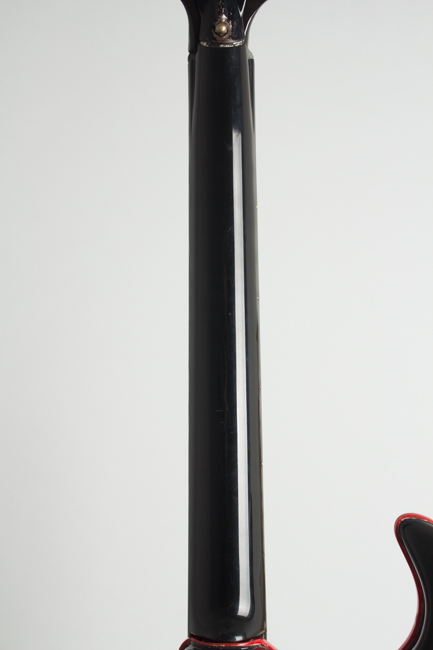 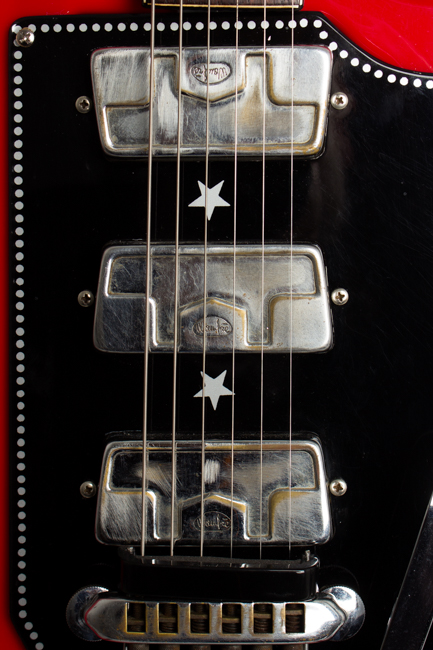 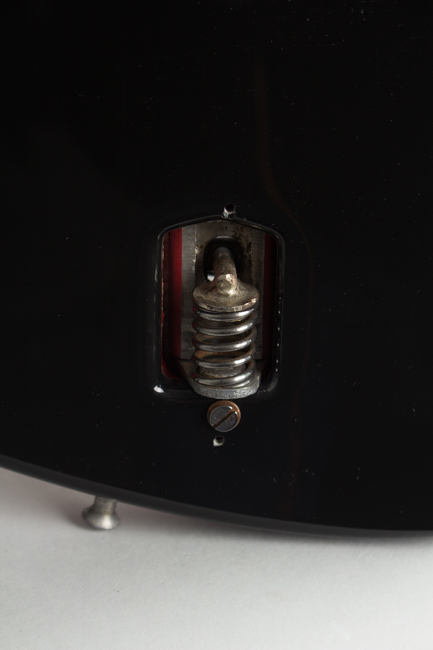 "What are those guitars -- man, we don't have those in the STATES!" So spoke Bob Dylan in 1965, captured on film looking into the window of an English music store full of Wandre guitars. These amazingly futuristic and completely original instruments were sold under several brand names in Europe through the 1960s. They have fascinated many adventurous electric guitar fans since then, but most modern players have never seen or handled one. A few select models were briefly marketed in the US just prior to the guitar boom period but they are extremely rare in this country. All Wandre instruments are eccentric, sometimes to the extreme. The solid-body "Doris" has the best of Italian artist/engineer Wandre Pioli's concepts wedded to a more functional guitar superstructure than many.

The full Wandre story is a book-length epic tale of creativity and commerce, and indeed there is a book available for the curious! This rare guitar is the final version of the "Doris" model, redesigned from an earlier more eccentric iteration in 1965-6. The "Doris" is one of the more conventional of Wandre Pioli's 1960s designs, a plastic solid-body in a sort of warped, flattened Stratocaster shape. It is equipped with three of the Davoli pickups he favored in a conventional pickguard top-mounted screwed solidly to the body; many Wandres have some sort of floating electronics assembly. The pickups are controlled by a bank of on/off 2-way lever switches with a master volume and master tone knob.

Wandre's proprietary plastic-sheathed aluminum neck is mounted to a fairly "normal" solid-body in a somewhat exaggerated Fender-esque mode. Since it's a Wandre, that body is made of molded plastic sections over a small wood core; in this case, red on top with a black back. The internally mounted tremolo system and fully adjustable bridge are also unique Wandre creations. The bridge actually mounts OVER the strings, with small cradles for them hanging off the underside. It is still fully adjustable for height and intonation. Since this makes palm muting awkward, Wandre thoughtfully provided a floating mute on the forward edge, activated by palm pressure as desired. It seems odd at first, but actually works quite well and is touch sensitive unlike similar systems found on Fender, Vox, and Gretsch guitars.

"Doris" is pretty much unlike any other guitar in both sound and feel. While somewhat conventional compared to many of Wandre Pioli's more eccentrically-shaped electric children, it maintains all the best sonic and engineering features of the line combined with a more solid feel than most. It plays and sounds fantastic, with the airy-but-biting tone of the Davoli pickups but sturdier feeling and a bit more aggressive sounding compared to the ethereal semi-hollow designs that make up much of the Wandre line. A fantastic example from the most inspired oddball of Italian '60s guitar design, ready to go.

This very rare guitar has survived in better condition than many of Wandre Pioli's creations; they are made of fairly thin-gauge plastic after all! The instrument is mostly original; these guitars are often missing parts or have damaged bodies due to the quirky nature of their construction. The plastic outer sections of the body and neck are fully intact with just one small crack on the lower edge of the body; this is in the seam line and is completely solid. The fragile thin plastic neck sheath (often completely missing by now) is complete, solid, and smooth to the touch, looking practically new. There are dings and scuffs here and there, but overall not a lot of wear.

There are small plastic covers missing from the vibrato spring and neck heel, both on the back. This is very common with Wandres. The trem arm currently mounted is fully functional but not in the original style; the originals were a long thin wire arm brazed to a mounting cam and are often broken by now. The knobs are period Italian Vox pieces; from the period, but probably not original.

The pickups and the top of the bridge show some plating wear but everything works as intended and sounds superb. The frets show very little wear; the instrument does not seem to have been played very much. The mute actually works perfectly, activated by palm pressure and not locking in place like other similar systems which makes it more intuitive and expressive in use. This is a very fine playing and fabulous sounding guitar despite (or because of) its eccentric construction, and players encountering them for the first time often marvel at how something that looks so wacky can sound and play like a world-class instrument. Excellent Condition.
×