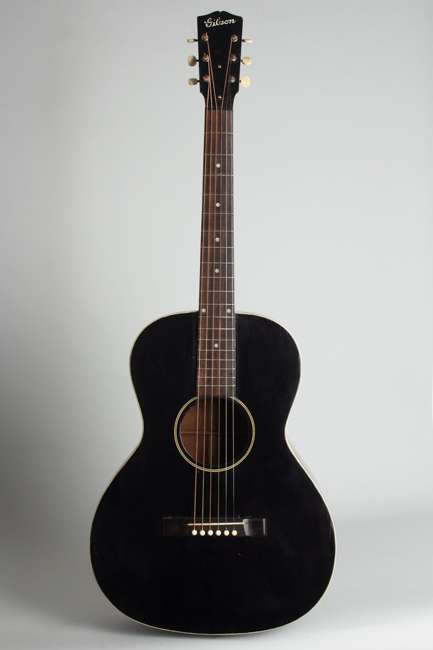 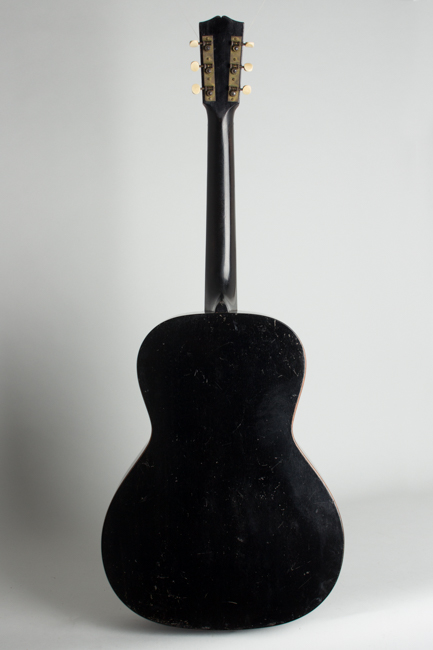 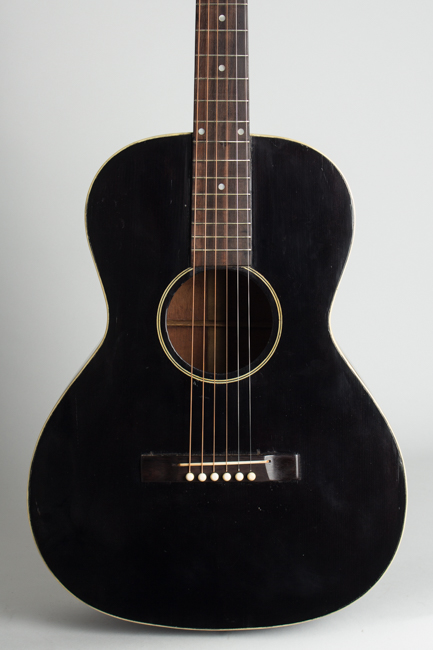 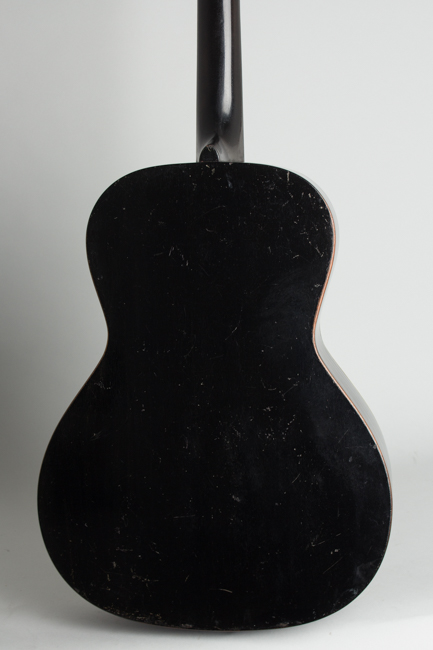 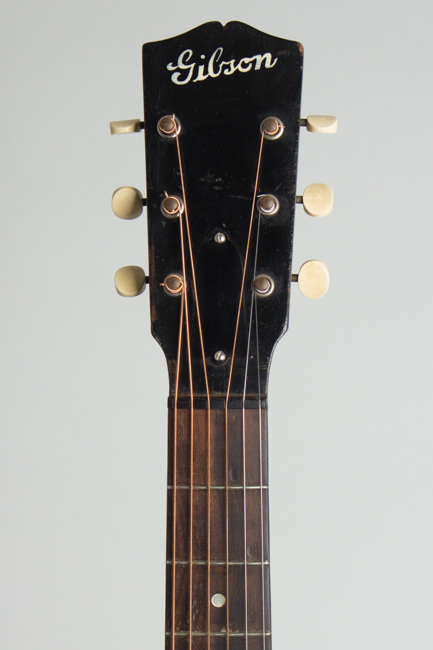 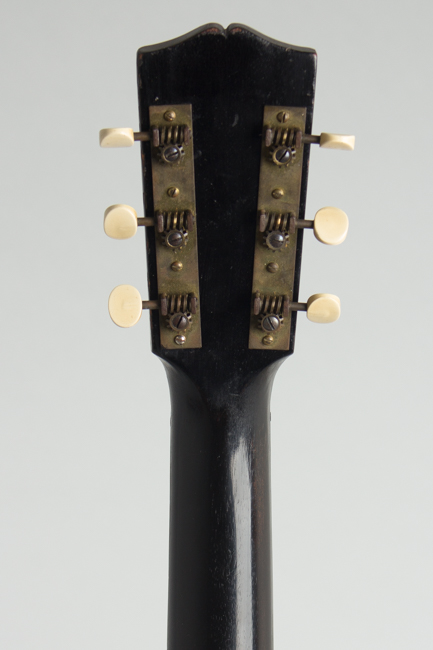 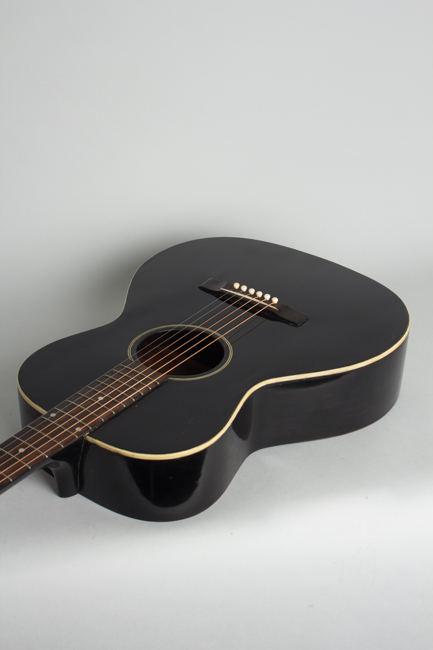 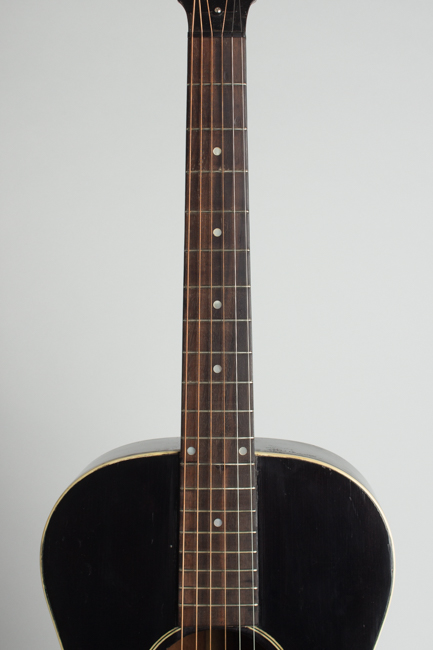 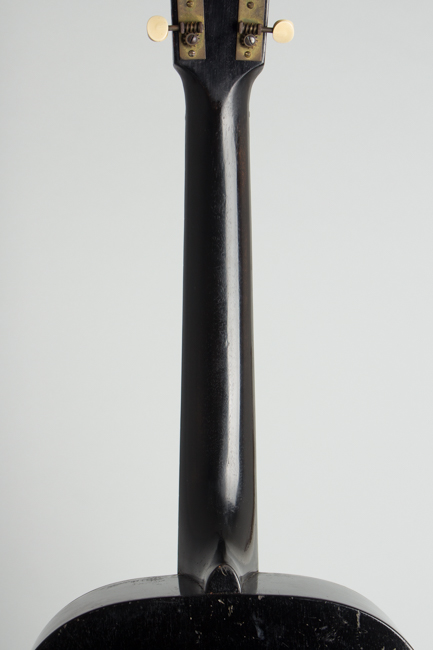 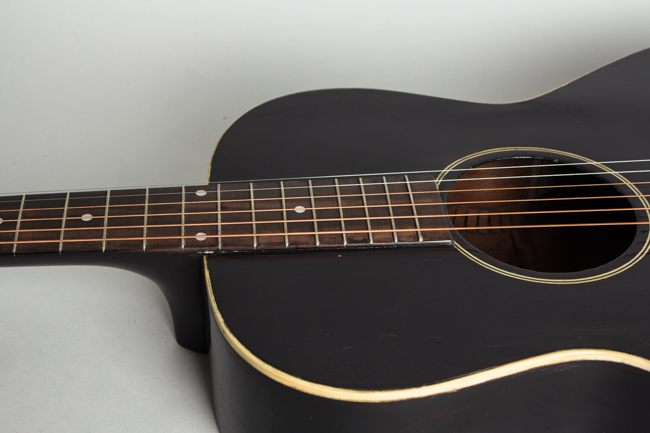 This is a super early 1931 12-fret Gibson L-00, the very rare initial version of this seminal Gibson flat-top model. It is finished in ebony overall with white binding around the top and no pickguard. The L-00 quickly became a Depression-era staple for Gibson, first offered this year at the rock-bottom price of $25.00 (without case). This one would be from one of the first batches of L-00s made, dating to a year or so before the instrument was re-designed into the more familiar 14-fret version sold up until WWII.

This is a very plainly-ornamented guitar with a white script stenciled "Gibson" logo, single-bound spruce top, and 3-ply sound hole ring; still, the black-and-white cosmetics give it a very striking "tuxedo" look. The bracing is a VERY thin X pattern, and the neck is a slim and surprisingly modern feeling "C" profile, not the deep "V" that would be adopted a year or so later. This is a much more comfortable neck for most modern players, but was a relatively short-lived feature on this model. It actually joins the body at the 11 1/2 fret position, a short-lived Gibson quirk. Apart from this oddity this first L-00 is broadly similar to Gibson's period budget "Kel Kroydon" models, but with the useful addition of the company's adjustable truss rod and the striking ebony livery.

The L-00 model subsequently went through several design changes in a short period of time in the early 1930s; this is pretty much our favorite version, an extremely light and responsive guitar, super sharp-looking, and a fabulous fingerpicker. These were built in fairly limited numbers, as production of this version of the model coincided with the worst years of the Depression when even $25 was beyond the reach of many Americans. Due to their relative fragility, few survive as nicely as this one which even with some careful restoration remains an excellent player's instrument.

This guitar shows some light general wear, with what appears to be more than one bout of restoration to keep it in top playing condition. The bridge is a modern replacement by Fraulini guitars builder Todd Cambio, as is the correct style small maple bridgeplate. Internally some of the braces have been reglued solidly but visibly; it looks like this was done a long time ago. The top was oversprayed when the bridge work was done, so it has a somewhat shinier patina than the rest of the instrument. The back finish is original with some small touchups; the sides look to have had some overspray and polish out some time ago as does the back of the neck.

The neck was reset at some point, while the frets appear to be the original thin wire and show remarkably little wear. The fingerboard has a couple of small worn spots in first position. Amazingly the guitar does not show any major cracks, which is very unusual for one of these. There are a few small grain splits to the top in the upper waist area, and one just at the edge on the curve of the lower treble bout; all are inconspicuous. The crucial area around the bridge is completely solid.

The headstock finish remains original, as does the ebony nut. The original unplated strip tuners with black buttons are in good shape and work as well as they ever did. This is a fine playing and sounding example of this fairly rare guitar, and even with some fairly extensive restoration better preserved than many. It is a fine blues machine, and beyond that a fairly versatile all-around flat-top guitar. It is equipped with a modern HSC. Overall Excellent - Condition.
×