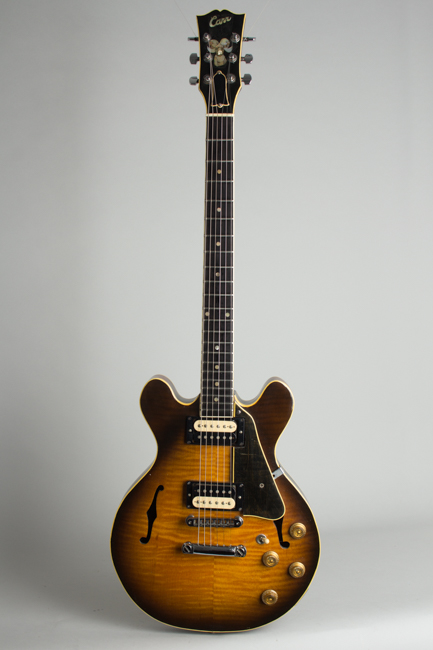 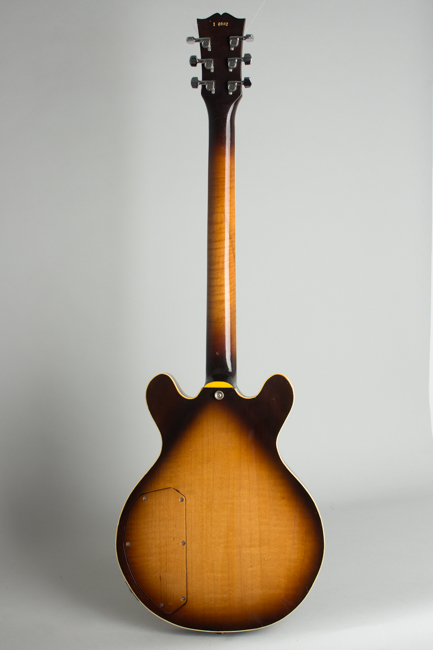 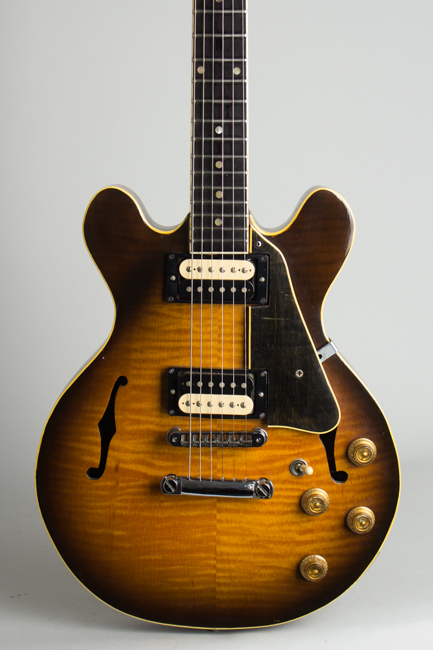 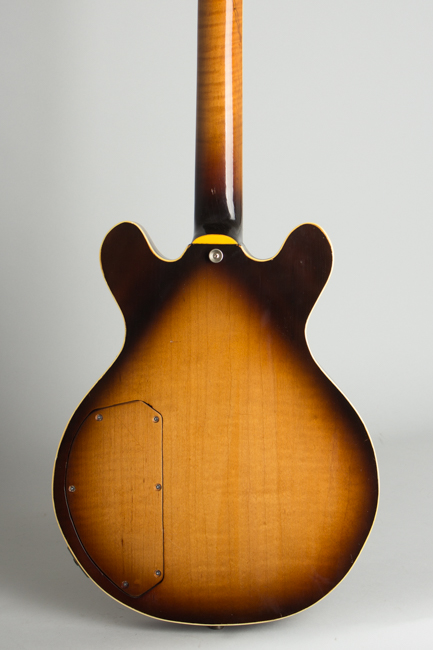 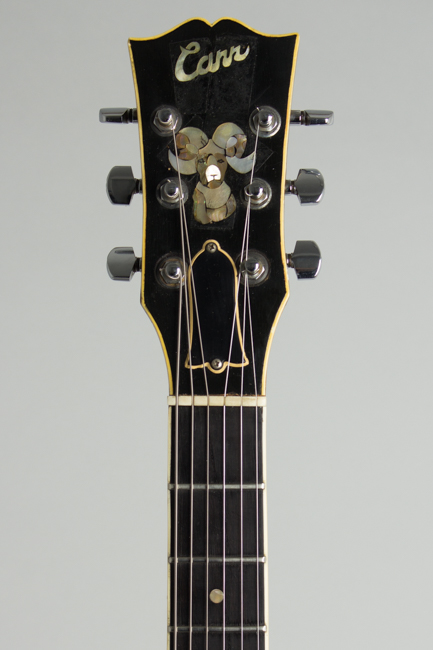 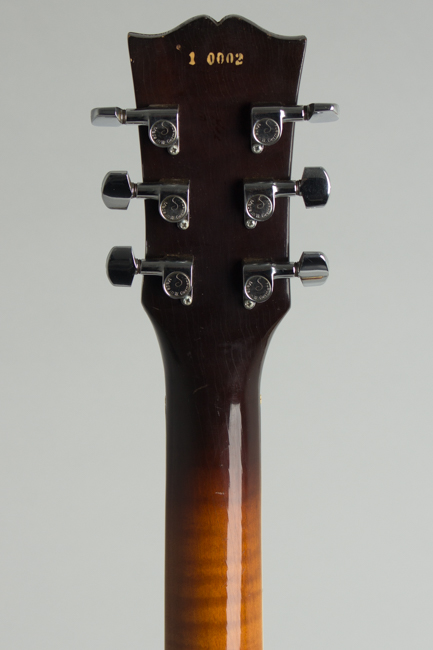 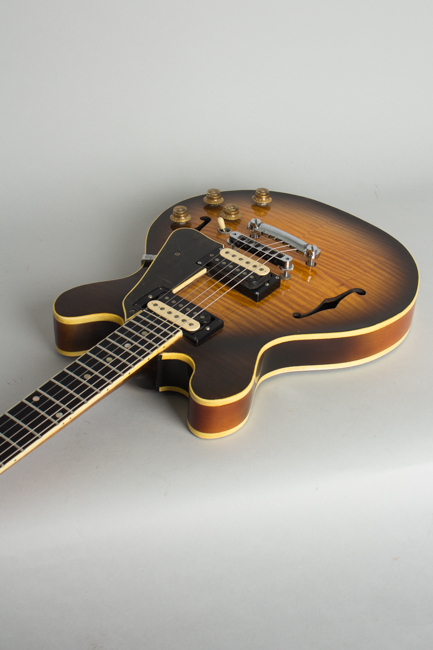 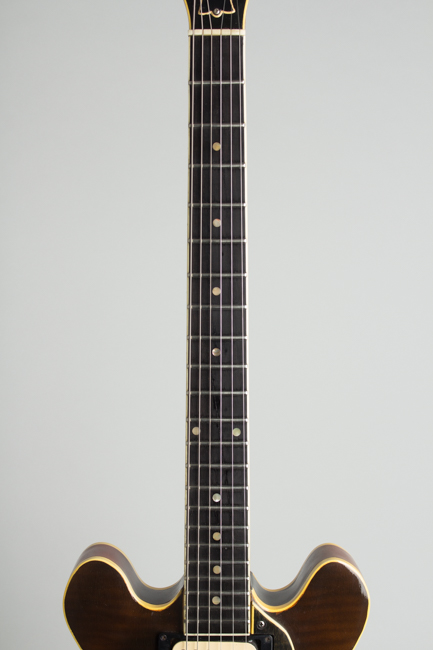 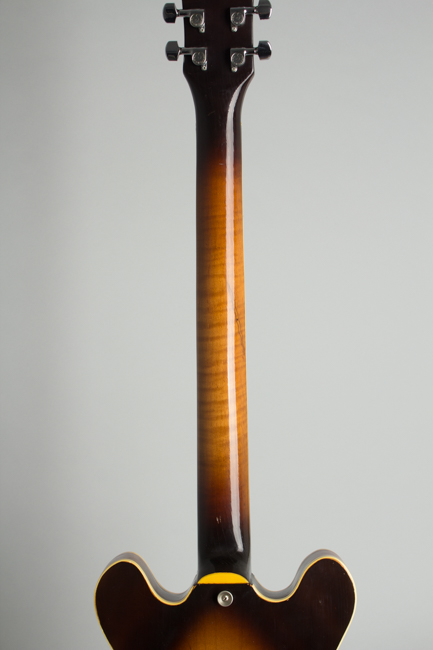 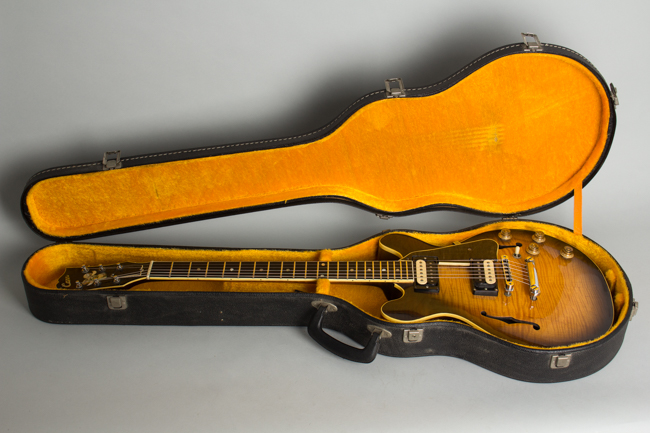 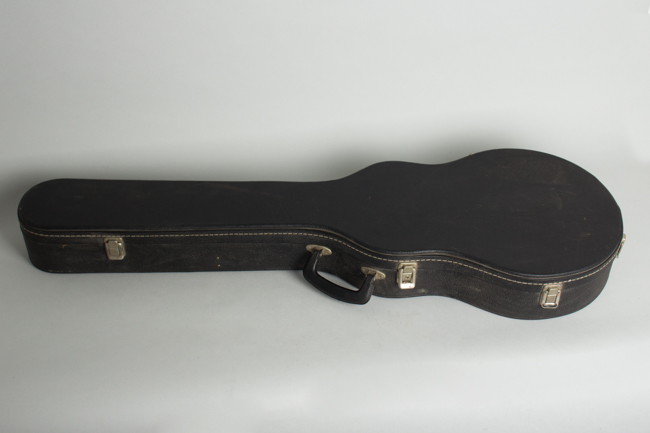 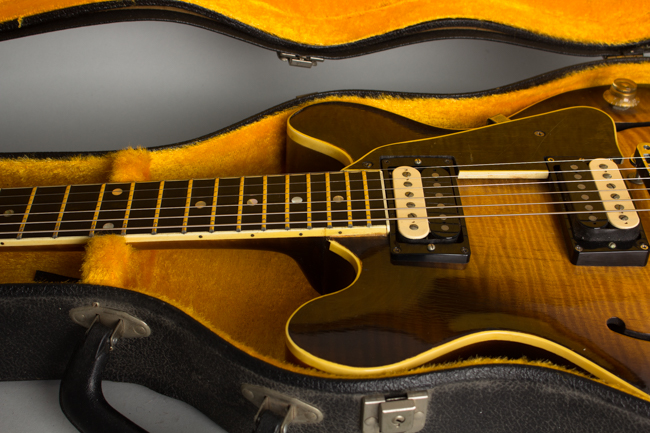 This instrument is a real slice of semi-obscure New York guitar history. It was handmade around 1981 by Steve Carr, a well-regarded NY-area luthier best remembered for designing and building a number of custom instruments for Kiss in their heyday. These included the original Gene Simmons Axe bass and the iconic custom Les Paul-style guitars for Ace Frehley, some with built in special effects. Carr worked for some time as the lead Kiss guitar tech, but he also learned his lutherie skills while apprenticed with Jimmy D'Aquisto. He was also employed as a traveling guitar tech and a well-regarded figure in the New York scene of the '70s and '80s.

Steve started making his own guitars in the mid 1970s and passed away in 2006. He remained a one-off hand builder and there are very few of his custom instruments in existence; they rarely come up for sale. This particular semi-solid guitar resembles a small-bodied (but full scale) Gibson ES-335, but actually contains an unusual mix of ideas. Gibson began making models in this format much later, but when this guitar was designed and built it was a wholly new concept.

The actual construction is not much like Gibson at all. The striking bound arched top is hand-carved from thick flame maple, the back is a heavy solid slab of maple. There are cavities in the body under the hand-carved F-holes, but much of it is solid wood. Gibson's ES-335, of course, is made of pressed plys over a center block. Feel-wise this guitar is a sort of half Les Paul, half 335, but of all maple construction.

Steve Carr's apprentice time with Jimmy D'Aquisto is clearly reflected in the look and feel of the hand-carved maple neck, bound ebony fingerboard, and especially the bound wooden pickguard. One unusual but deliberate feature is a very acute neck angle, much sharper than either a 335 or a Les Paul. This causes the Gibson-style bridge and tailpiece to be mounted quite high off the body. It's possible this was related to the endless '70s quest for "sustaaaaain" or just possibly just an idea Carr was experimenting with.

The bound headstock is somewhat smaller and sleeker than the typical Gibson. The face is inlaid with a pearl and abalone ram design and a script CARR logo. The guitar is fitted with custom-wound DiMarzio pickups, in the typical "zebra" coil configuration. These are wired to DiMarzio pots dating to 1981, giving a good idea of a likely build date. Carr and local pickup maven Larry DiMarzio would have had a lot of back-and-forth in the Kiss era.

This is long rumored to be one of two similar prototypes built especially for Eddie Van Halen, who supposedly tried and returned them. There is apparently no extant record of this, but is a piece of oral history that has followed this guitar (and one known similar but plainer sister instrument) around since the 1980s.

Wherever it may have traveled when new, over the last four decades this unique guitar has been part of a another, quite different New York story. Since the mid-1980s it has been in the possession of the amazingly prolific New York guitarist/composer Elliott Sharp. The instrument can be heard on a number of projects and he detailed its use as follows:

This guitar shows some light general wear but remains all original as built, as far as it is possible to ascertain for a unique one-off instrument. The finish shows checking overall, with numerous small scuffs, dings, and dents but no major wear or loss to the lacquer. The wooden pickguard shows a couple of deeper scratches. At some point somebody put some sort of tape over the "Carr" logo and ram inlay, and the hardened residue remains. The original Gibson-style knobs all have small stress cracks around the shaft holes, possibly from being fitted to the wrong style pots. They are intact and work fine, but this is visible.

The back of the neck is quite clean with only a few small dings. The ebony fingerboard has some old dryness cracks but nothing serious. The original frets show only very light wear and the instrument plays and sounds great, with an interesting feel somewhere between a Les Paul and ES-335. This is a unique and truly cool piece of New York guitar history, both in its local creation and longtime provenance. It resides in the '70s Japanese HSC it has been in since new. Excellent Condition.
×