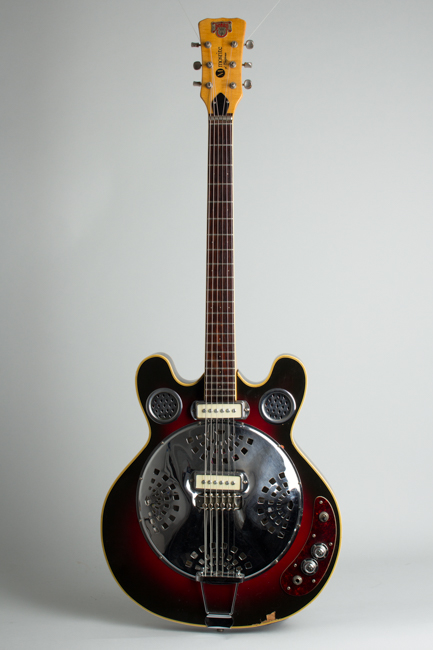 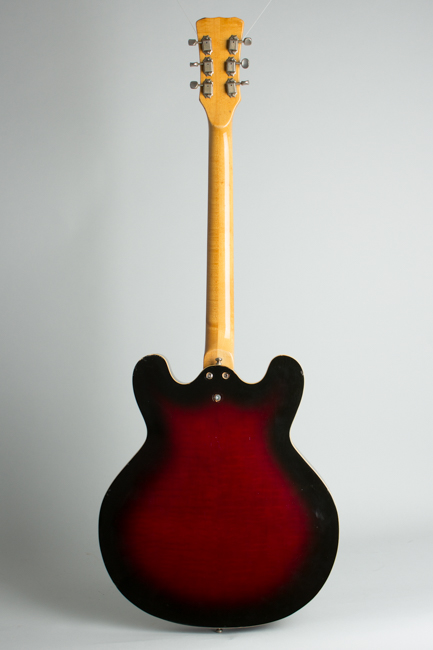 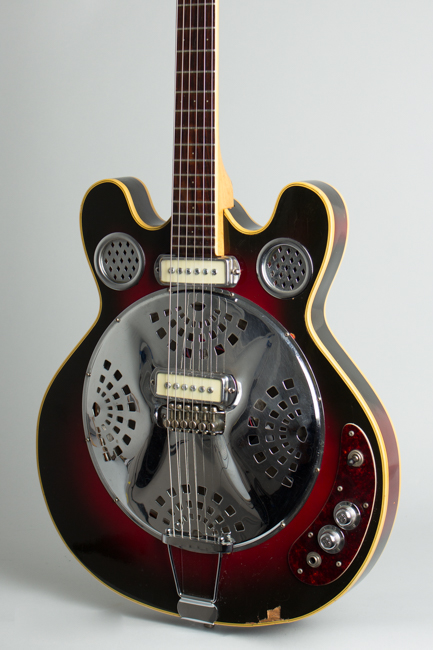 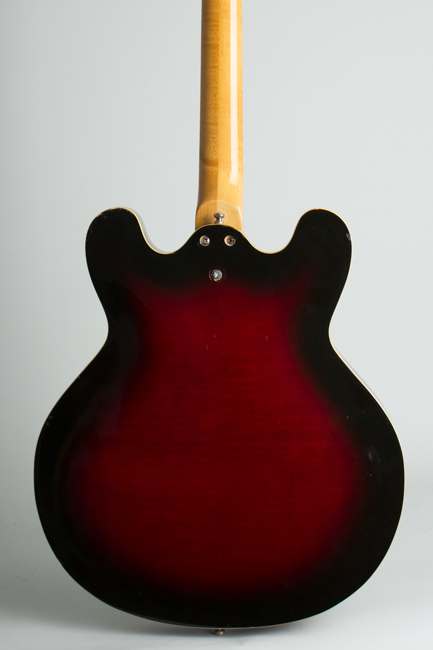 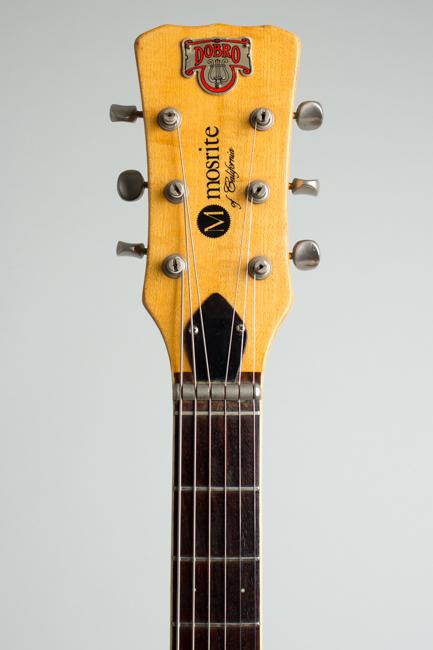 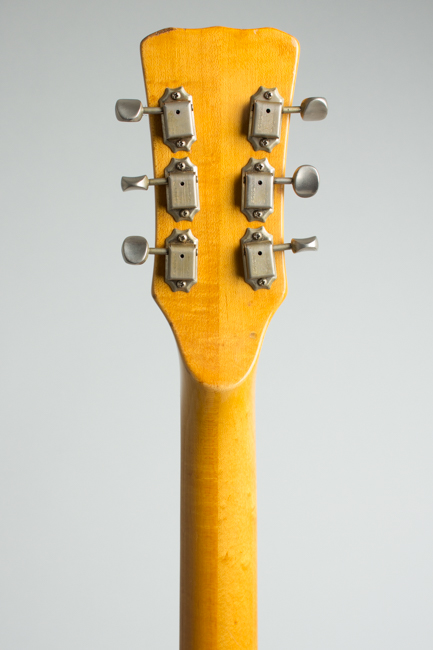 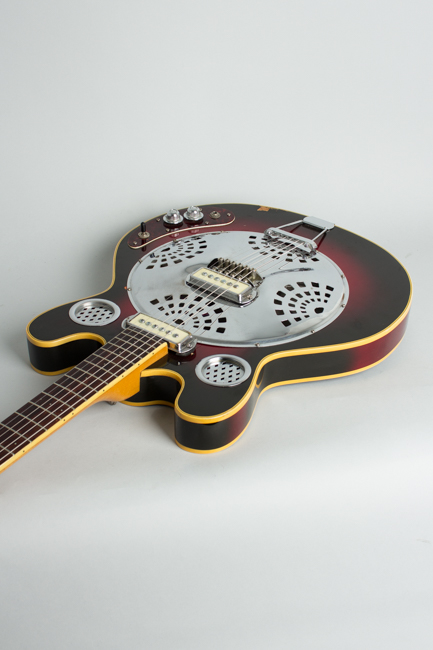 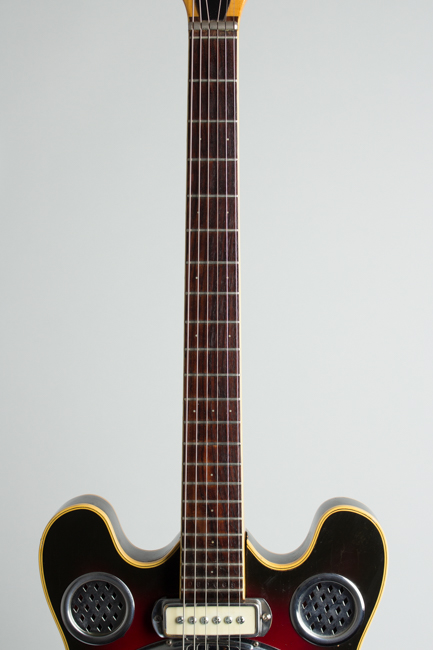 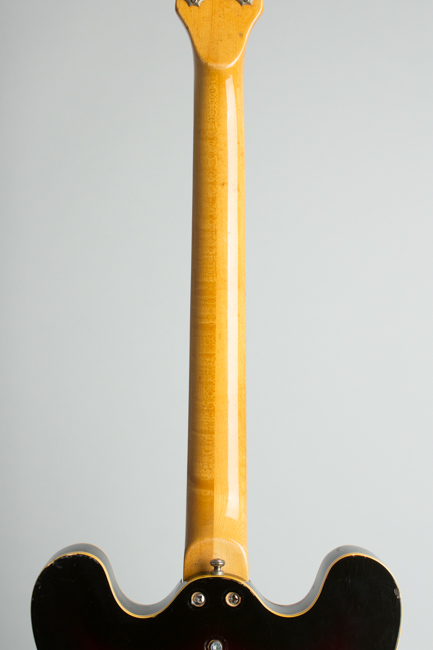 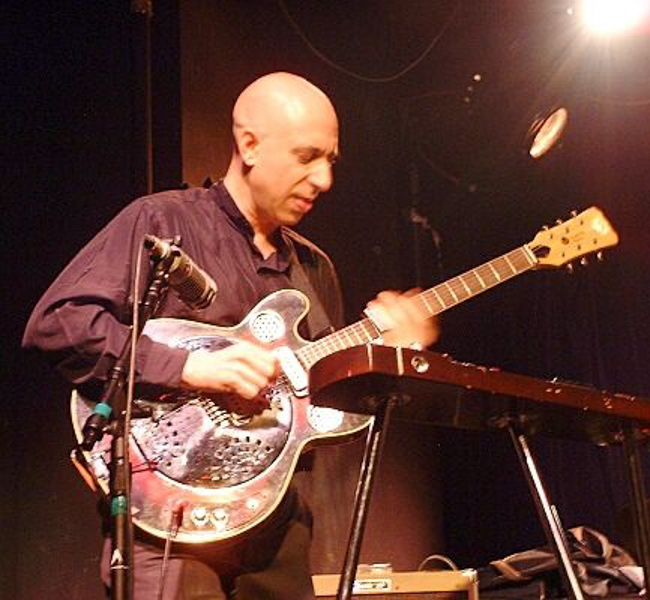 There were moments in the guitar-mad 1960s where it seemed like anything was possible. Marry a Dobro resonator to a thin hollowbody electric? Sure, why not, let's have Bakersfield maverick fretted entrepreneur Semie Mosely build it, with one of the west coast's up-and-coming young stars endorsement. Such is the tale of the Mosrite Californian, one of the rarer and more unusual (which is saying a lot) products of the original Mosrite operation. This example has an extra pedigree, having been owned and used by New York's own maverick player/composer Elliott Sharp for the last few decades.

Flush with cash from the success of his Ventures-endorsed solidbody guitars, Semie Mosley bought the rights to the Dobro name and patents from the Dopyera Brothers in the mid-60s. This short-lived deal resulted in a more traditional line of sometimes-electrified "Dobro" and later "MOBRO" branded resonator guitars, but more to the point also unleashed the Californian on the world.

Originally this model was to be a signature instrument endorsed by Glen Campbell, who was just emerging as a solo star at the time. He used a Mosrite prototype version with his name inlayed on the fretboard for sessions and TV appearances in 1967-8, but then switched his endorsement to the new Ovation brand, leaving this model to be renamed simply the "Californian". The entire Mosrite operation collapsed for the first time in 1969 and this hybrid instrument (made only in fairly small numbers) disappeared forever.

This particular guitar has pots coded 6647 (47th week of 1966) so was likely assembled in early/mid 1967. It is built on a plywood 335-style fully hollow body with a flat top and arched back and a Dobro resonator cone, spider and coverplate sunk into the center. It has two of the Mosrite pickups used on all of their Dobro-styled instruments, controlled with a tone, volume and 3-way switch set up. The bolt-on maple neck is very slim in typical Mosrite style with a bound rosewood fingerboard and very low frets. The tuners are original Kluson Deluxe with metal buttons and the handy Safe-T-slot shafts. This thin-rimmed guitar is light and easy to handle for a resonator instrument.

The original Mosrite pickups were rewound by Bob Shade of Hallmark Guitars, the undisputed Mosrite expert working today. Elliot Sharp tells us "I've had it since 1985 and used it in the studio, gigged perhaps twice in performance with Terraplane and with sci-fi author Jack Womack. It appears on the following recordings with the band Terraplane: "Doing The Don't", "Forgery", "Sky Road Songs", "4AM Always"." This unique sounding guitar has a tonal character unlike anything else, fully electric but with the flavor of resophonic lurking beneath even at higher volume.

This engaging Mosrite oddity shows some wear and tear but remains largely original except for the pickups rewound as noted. The pots and switch are original; the jack and some of the wiring have been redone. The pickup mounting screws are newer. The plywood body has some chips on the edges on the front and back and by the coverplate, but no structural issues. The largest chip has a piece of the top veneer missing on the top by the back rim, where the guitar took an impact long ago. This is solidly sealed up but quite visible.

The neck is clean overall with some small dings and dents, the frets are very low (typical for Mosrite) and have some minor wear but still play well. The third screw in the triangle setup securing the neck is not original, and the thin metal grommets under the other two have crumbled, which is not uncommon on hollowbody Mosrites. This guitar has seen some use but plays and sounds good, with the unique electro-resophonic tone no other guitar quite captures. Overall Very Good + Condition.
×