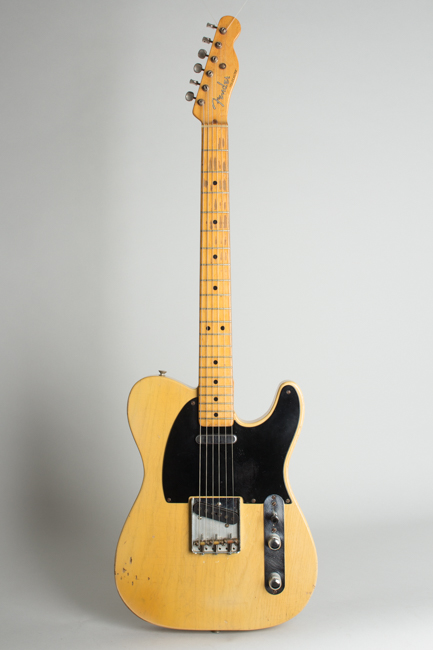 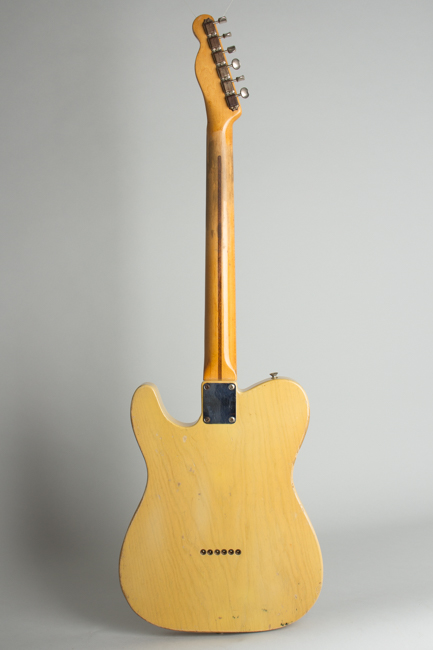 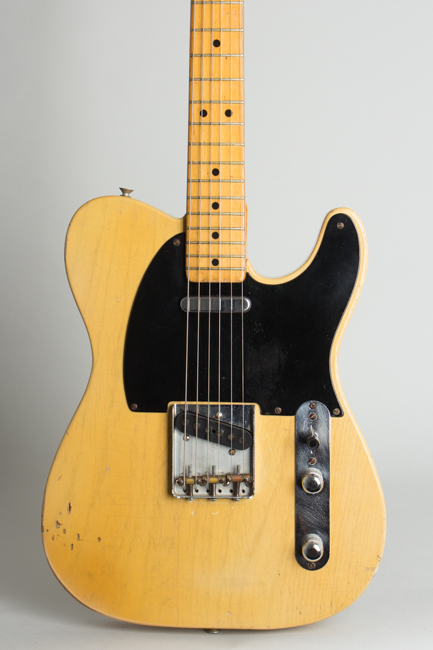 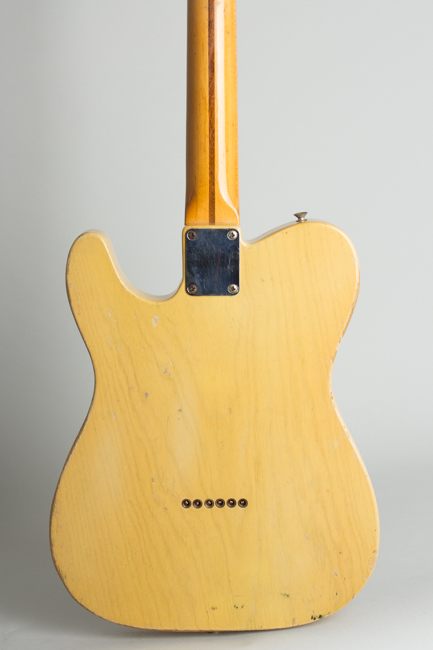 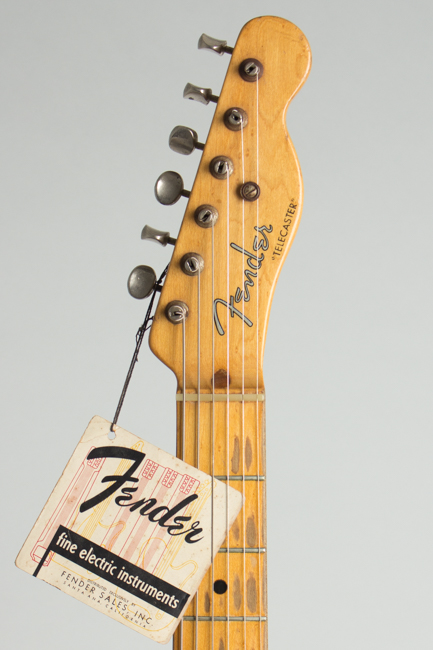 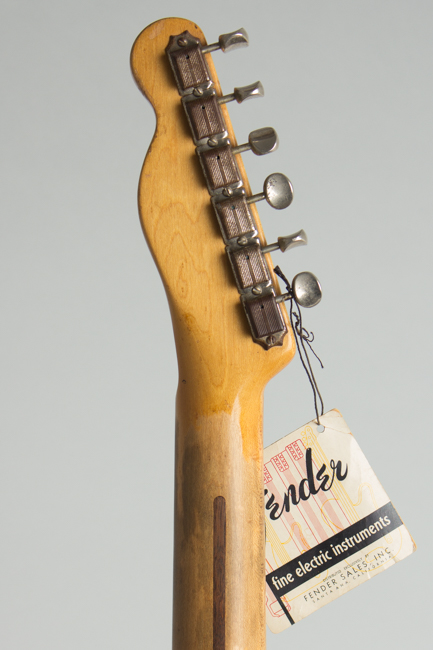 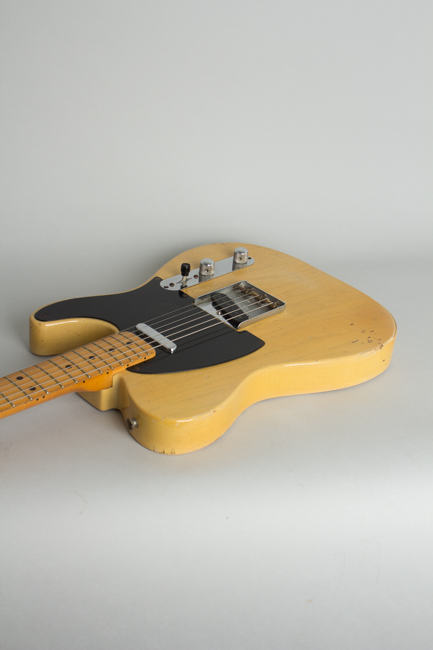 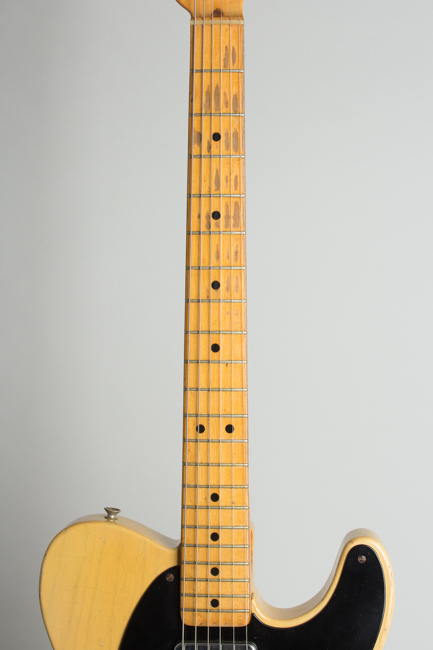 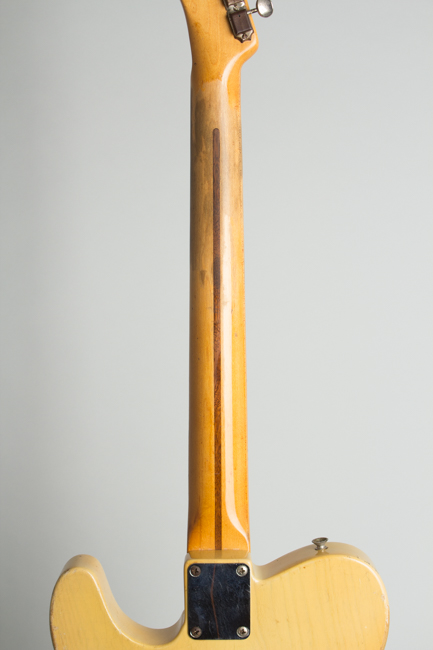 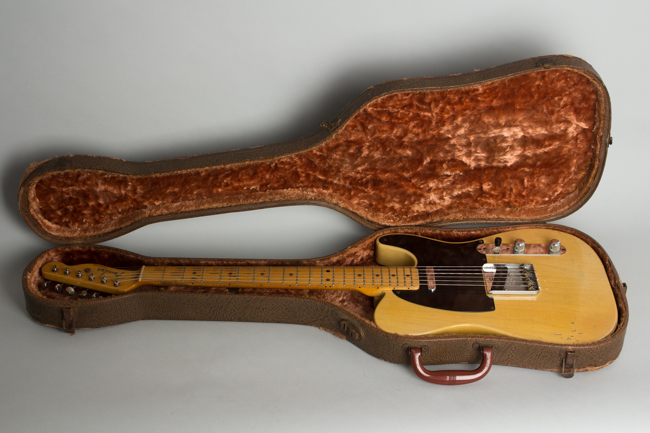 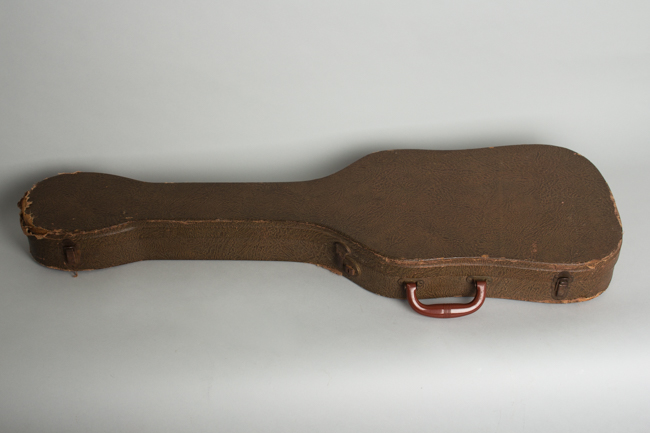 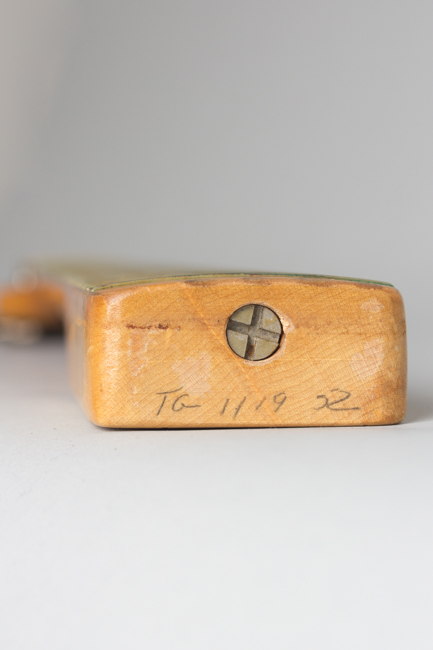 This is a superb original example of a "Blackguard" Telecaster -- the guitar that put Leo Fender on the map -- built at the company's original cinder-block factory in Fullerton, California late in 1952. It exhibits all the classic '52 Tele features: the one-piece maple neck, aged "butterscotch" blonde-finished ash body, lacquered black fiber pickguard, brass bridge saddles, and of course the original black-bobbin hand wound pickups with a sound for the ages.

This guitar's serial number 3498 is stamped into the bridgeplate, the unit at the heart of the Blackguard Tele. The neck is marked 11-19-52 in pencil on the heel alongside the initials of Tadeo Gomez, who signed most of the Fender necks made in this period. The body is marked 11-11-52 in the neck cavity, with the penciled "Eddie" beside -- his signature is found in many Tele and Precision Bass bodies from 1952. These parts are more closely dated than many early Fenders, showing perhaps some sped up production towards the end of the year. One of the pot date codes is clearly legible reading 140-220 designating the 20th week of 1952, so as is typical those sat in the bin for a while.

This guitar has been played but not abused since it shipped out of Fullerton in late 1952 or early 1953. All parts remain original including the early wiring rig; unlike many, it has never been re-wired to the "modern" Telecaster switching scheme. As originally set up there is a "deep bass" capacitor on the neck pickup in switch position #1; position #2 is the neck pickup in normal mode, and #3 is the bridge pickup with a master tone control. The neck and bridge pickups can be combined by carefully lodging the selector between positions #2 and #3, which works better on this guitar than some we have had.

The very comfortable neck has a nice "C" profile, slimmer with less of a rounded "throat" in the lower positions than some '52s we have had. The screws are mixed flat and Phillips-head types as is customary for 1952. For many, this is THE classic Telecaster year, with the same look and feel of the earliest Fender Broadcaster and "No-Caster" guitars from 1950-51, but more consistent production standards. Many of the fine details of the instrument continued to gradually evolve as the decade went along, but '52 is the benchmark year for comparison to all later Fender guitars, and the year Fender has generally selected for basing its re-issues on.

Before the introduction of the second Fender solid-body (the Stratocaster) in 1954, the Tele and Precision Bass were the company's most innovative and sensational products, and in 1952 were already causing a revolution in playing styles, shaking up the guitar world in a big way. At the time the Telecaster had a totally unique look, feel, and sound, becoming instantly popular particularly with country players. In the years since, many players and collectors have come to consider the 1952 Telecaster the finest electric guitar ever made -- and one of the most historically important as well.

In his authoritative and beautiful book "The Blackguard", author Nacho Banos references this, calling '52s "a personal favorite" and stating, "The neck feel and lead pickup sounds from these ... make them some of the best Fenders ever made". Early Fender Telecasters of this period are universally considered as one of the most desired of all electric guitars, and this is a very nice original example.

Overall this is a very nice example of a late 1952 "Blackguard," showing some general wear and tear but no major alterations. The thin lacquer finish on the body has ambered and checked and shows typical dings, dents, and worn spots -- especially to the edges as usual -- but no large areas of loss. The face shows several small but deep "case lid dings" in the upper arm wear area, where someone let the lid fall on the guitar several times long ago. You'd think after the first time they'd have learned not to do that...d'oh!!!

The thin clear lacquer finish both on the back of the neck and on the fingerboard shows wear down to the wood between the first and seventh frets, again common on 1950s Telecasters. The guitar has been very neatly refretted with the correct size wire, but there does not appear to be any overspray to the neck or fingerboard accompanying this. These frets are small and fairly low but quite playable; as they are not strictly original, the guitar could be refretted to taste if desired without losing any originality. The bone nut is newer as well; what appears to be the original is in the case pocket.

All hardware on the instrument remains original, showing some wear but no modifications. The finer pickguard has some wear into the lacquer in the typical area below the strings, although rather less than others we have had. The brass bridge saddles have some corrosion and discoloration but nothing is rusted hard and all adjustment screws remain functional. Internally the pickups and wiring are all original; one worn solder joint has been carefully touched up.

Everything on this instrument other than the fretwire and nut is as it left Fullerton in late 1952 or early '53, with less wear from years of hard gigging behind it than many of these now show and none of the modifications that befell way too many of them. These were unique instruments when new, often "played to death," and the majority of survivors have not only been heavily used but commonly modified and now often subject to extensive restoration. Wherever this one has been, it escaped this fate and remains an original and truly fantastic-sounding guitar, with a powerful bridge pickup that twangs sweetly as required and a nice "middle" position.

The "ashtray" bridge cover is gone, but the guitar is still housed in the original shaped hard case -- a rarity in itself. These first generation Fender shaped cases (made by Bulwin) were fairly cheaply constructed compared to the 1955 and later rectangular ones, and many have not survived. This one has typical wear to the thin fabric covering -- mostly at the ends -- but is still fully functional. This guitar also includes something we have never had before: an original 1952-3 Fender hangtag. This has some foxing and wear but is intact with the little string that originally hung from the headstock. An extremely rare piece of paper ephemera is not hand-filled in but appropriate to this guitar, the cherry on top of a package of prime Fender greatness. Overall Excellent - Condition.
×