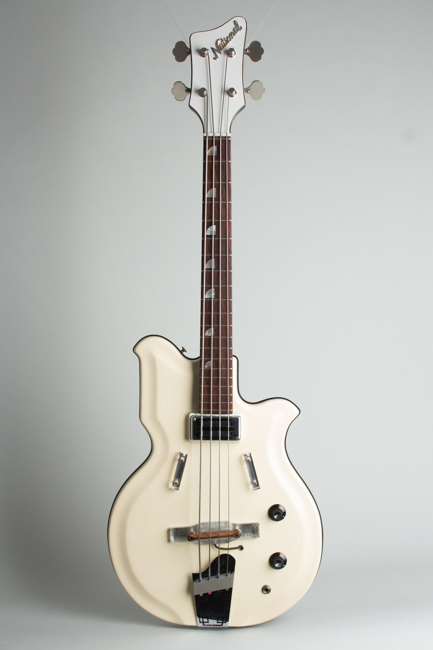 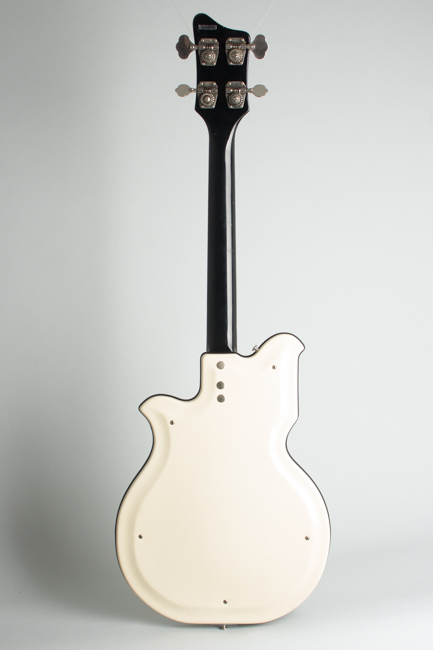 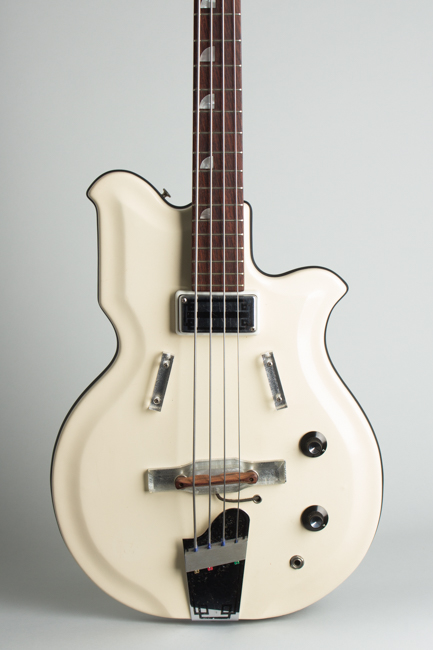 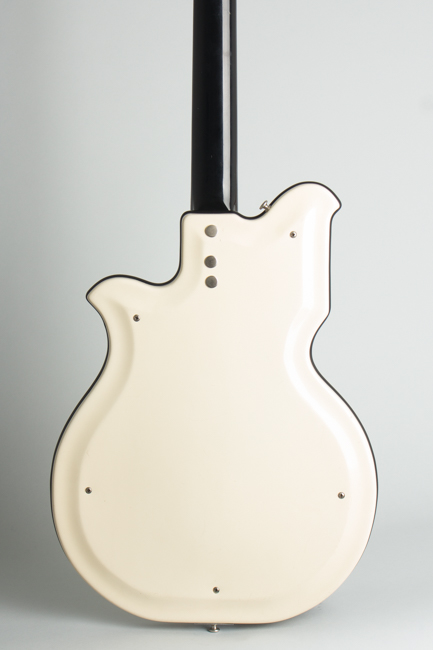 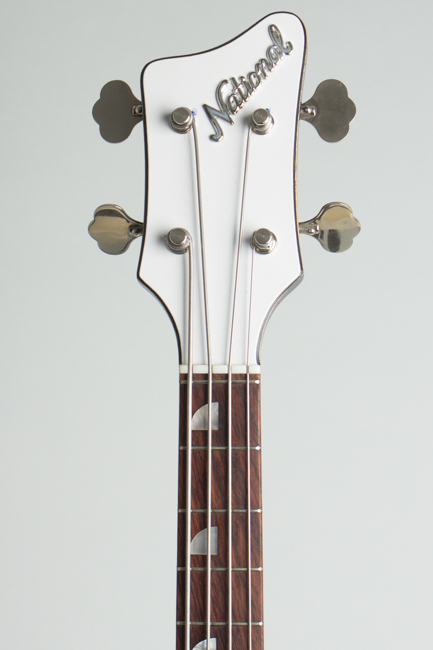 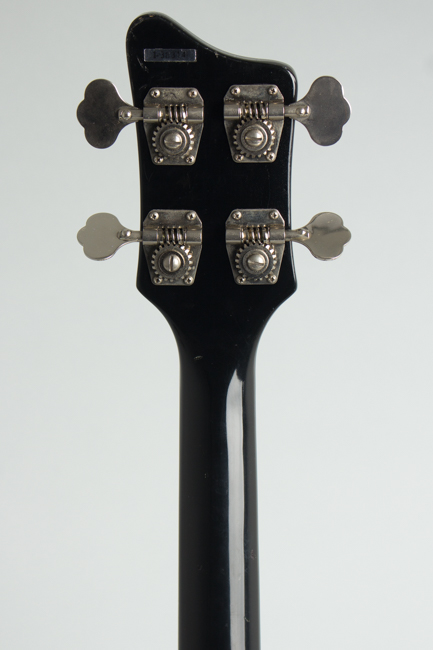 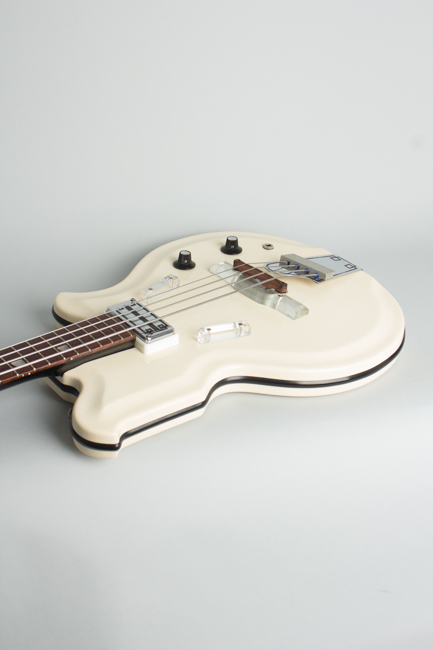 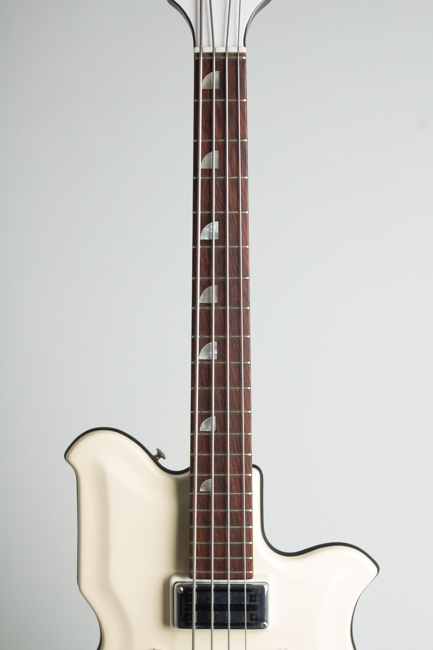 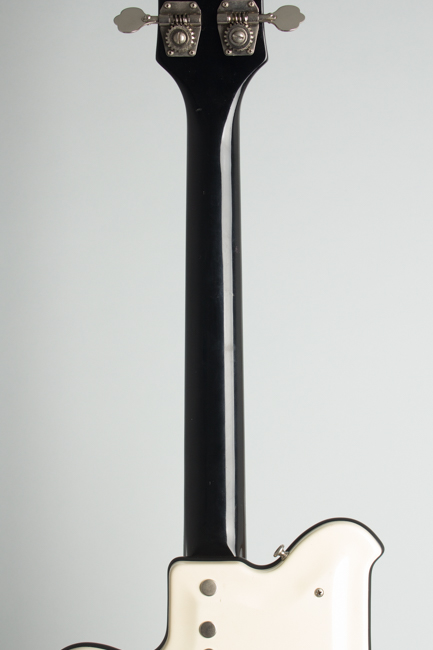 The National 85 bass -- originally named the "Val-Pro 85" -- was one of the sometimes overtly eccentric Valco Corporation's more oddball offerings. This is the lone bass model from the visually dazzling 1960s National Res-O-Glas line, some of the most exuberant of all vintage American electric guitars and utterly unique even 60 years on. With a molded fiberglass body, aluminum-cored neck and electro-acoustic "Silversound" pickup built into the bridge they certainly did not lack for innovative features, even at the peak of electric guitar design.

Although more simply laid out than most of the guitars Valco offered at the time the Model 85 still has its own particular quirks. Most short-scale basses are built around a +/- 30" scale, but Valco used a standard 24 3/4"" scale guitar neck. The result is a guitar-sized 4-string with very low string tension, super handy and easy to play for beginners and guitarists but a bit sonically challenged compared to many more conventional period basses. The sculpted "map" shaped body has a striking white finish on it, enhanced by silver-backed clear Plexiglass finger rests, pinstriped chrome pickup cover and tailpiece and a black rubber grommet around the edge at the joint of the two-piece body.

The pickup scheme is eccentric as well -- there is a standard Valco magnetic unit by the neck supplemented by the National "Bridge-Tone" unit built into the rosewood and Lucite bridge, which magnetically amplifies string vibration sensed by tines embedded in the saddle. The magnetic unit has a good low-end response, while the in-bridge pickup offers a very different bright and edgy tonality. The controls are a master volume and a blend knob, an interesting idea which allows varying the mix of signal between the pickups. The result is somewhat microphonic when the bridge unit is engaged, but if handled judiciously can produce a range of interesting and useful sounds.

This later Model 85 was built near the end of the production run of these rather eccentric basses. The body is about an inch less wide than the first 1961 models, and the "Florida" cutaway bout curves more downward. It is equipped with a large white plastic-faced headstock and full-size Kluson bass tuners, which make it much more convenient to string and tune than Valco's similarly diminutive Supro "Pocket Bass" with small guitar-style pegs. Although regarded as a "cheapie" now this was actually a fairly expensive instrument listing for $199.95 when new, on par with many professional basses in the early '60s. While never a popular pro's choice the Model 85 remains unique in both style and sound, a true "white elephant' of the vintage bass world and a fretted conversation piece par excellence.

This is a fabulous example of this bass overall: super clean, complete, and all original with just some minor wearp retty much as it left Chicago in 1965. There are some minor dings and dents to the plastic body and neck lacquer, but overall just not a lot of wear. Strung up with fairly heavy flatwound strings for the most usable sound this bass actually plays well, with a signature thumpy, rubbery and somewhat microphonic response. As good an example of this 4-string curio as we have ever seen, and just a really neat piece of Reso-Glas Americana. . Excellent + Condition.
×