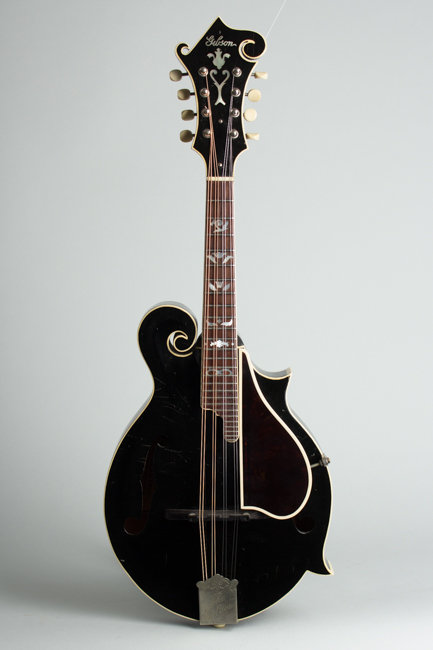 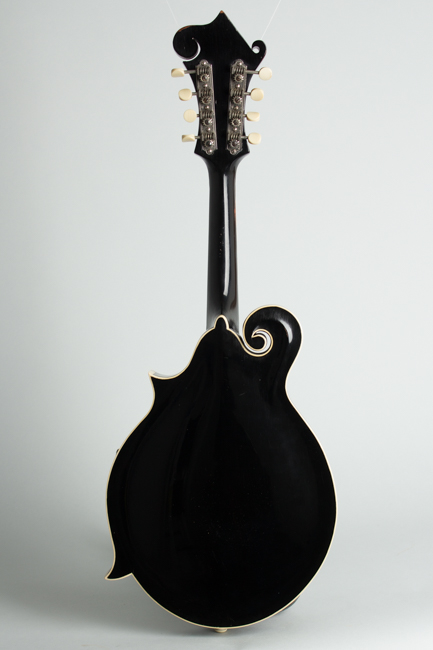 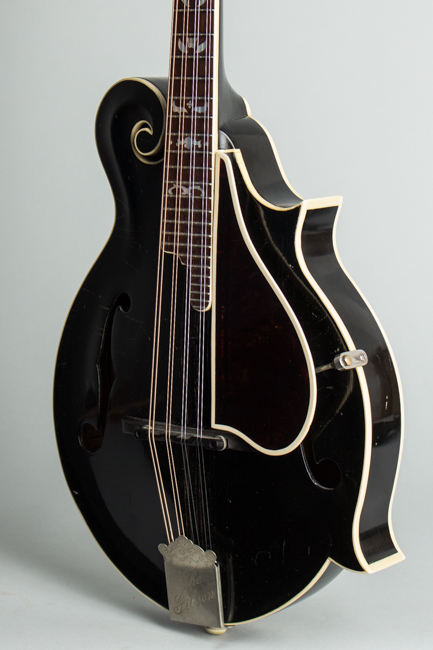 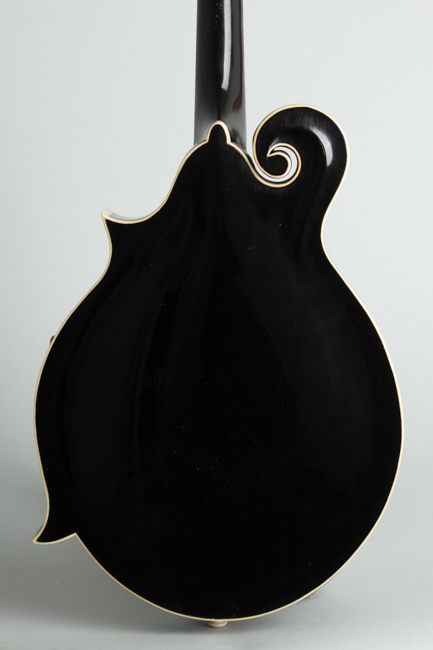 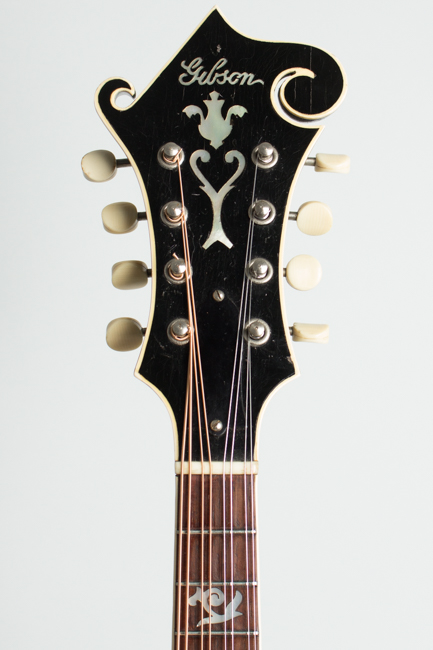 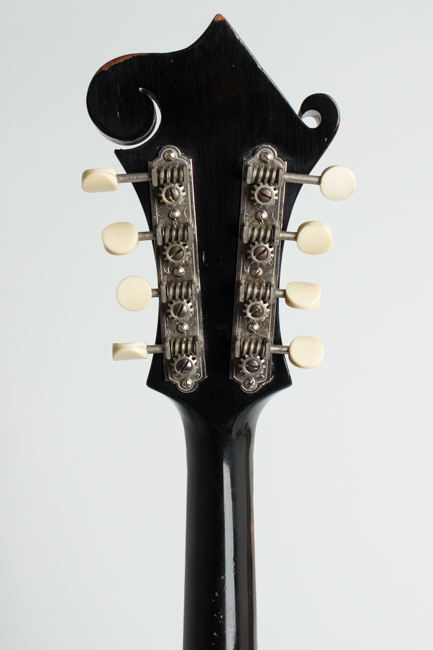 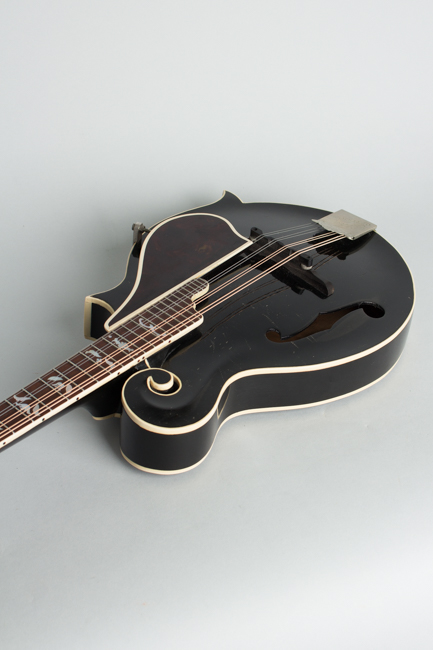 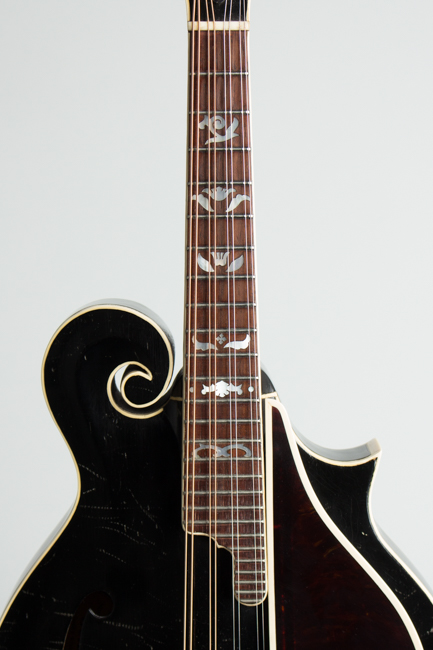 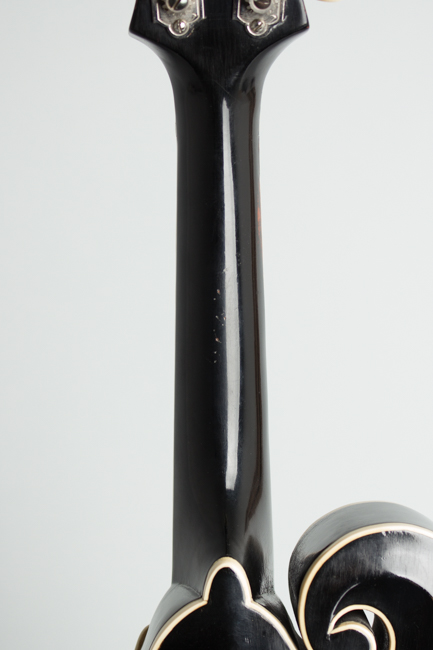 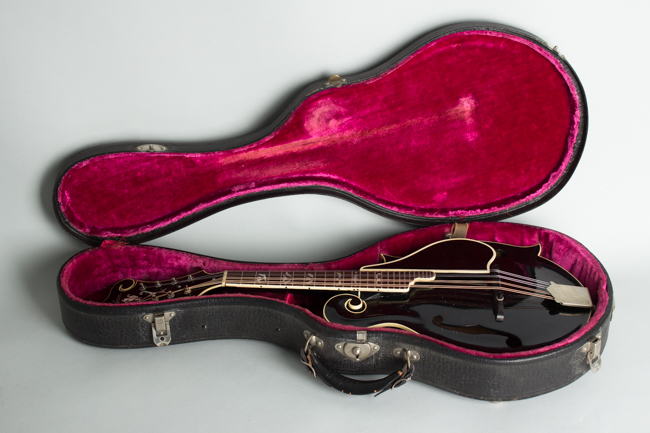 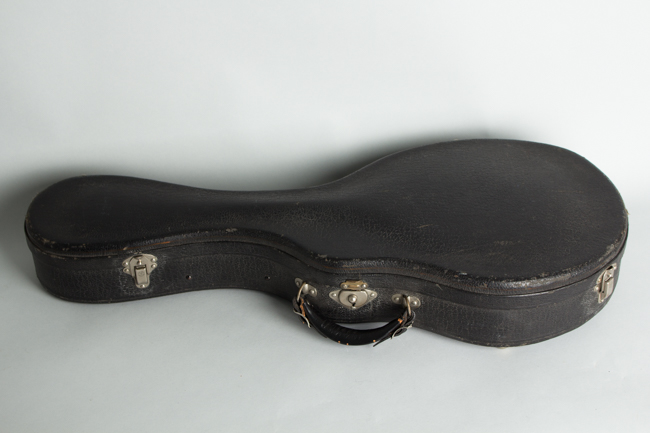 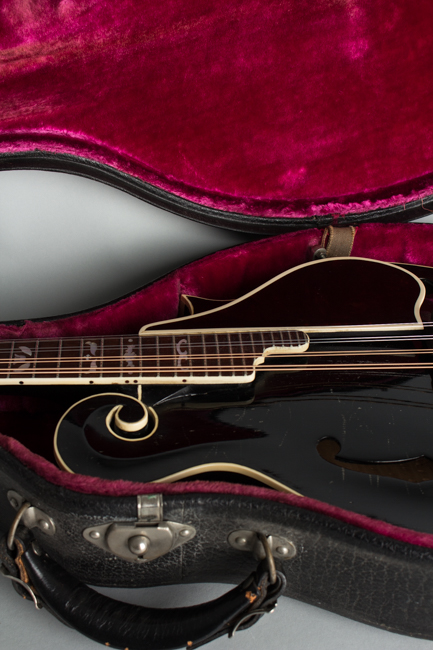 This instrument is of the rarest of pre-WWII Gibson instruments, and a particularly striking and distinctive mandolin. This F-10 dates to 1934, shortly after the model was cataloged, and is one of the very few ever actually built.

The F-10, along with the similar F-7 and F-12, were intended as a line of master-grade instruments to complement the superlative but extremely expensive F-5 mandolin, which at $250.00 was out of reach of all but the most well-heeled players in the Depression era. Unfortunately, interest in the mandolin was quite low at that time, and while the similarly-positioned L-7, L-10, and L-12 guitars were relatively successful, the mandolins vanished nearly without a trace, with only the least expensive F-7 lasting more than a couple of years in the catalog.

The F-10 features a lustrous black finish overall and elegant shaped pearl inlay on the fingerboard and headstock. Originally retailing at $150.00 (plus case), the mandolin was a full one hundred dollars less expensive than the F-5, but still priced above nearly all other extant mandolins from any other makers. The design of this trio of instruments is a bit unusual to modern eyes, as they combine the f-hole body construction of the F-5 with the shorter neck of the oval-hole F-4. It has been suggested this was done to use up parts that were languishing in stock for F-4s that it was becoming obvious would never be built.

Despite this unusual layout, the F-10 sounds great with a distinctive guttural bark, if not quite the full projection and high-end clarity of its longer-necked cousin. The scale length is the same as the F-5; only the neck/body junction and bridge placement are different. This is a fabulous mandolin for both player and collector, an extremely uncommon find in a pre-war Gibson. Available data indicates less than 20 of these were ever built, and all seem to have been made around the initial year. Bill Monroe's earliest records with the Monroe Brothers were cut with a 1935 F-7, and this F-10's very similar construction gives it a sound much like that heard on those classic recordings.

This instrument remains completely original and unaltered with only some minor pickwear to the top and some typical fretwear. It is certainly one of the finest of the very few examples known in existence. It also plays and sounds extremely well, with a powerful tone and plenty of volume when pushed. We have had several F-7's in stock over the years, but this is the only F-10 we have ever actually seen or heard. It remains complete with the original red-lined HSC, which is slightly over long so it also fits an era F-5. Excellent Condition.
×