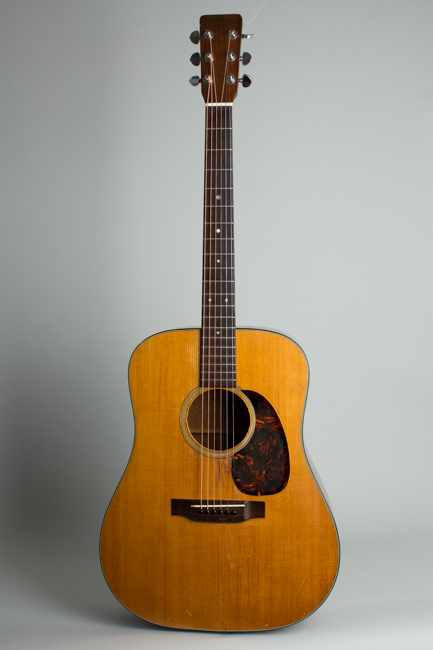 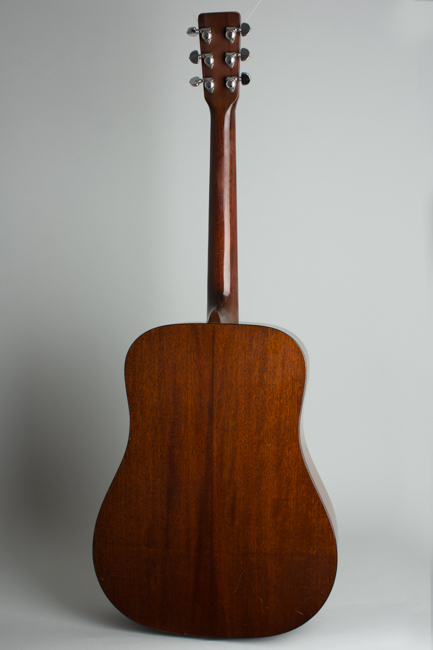 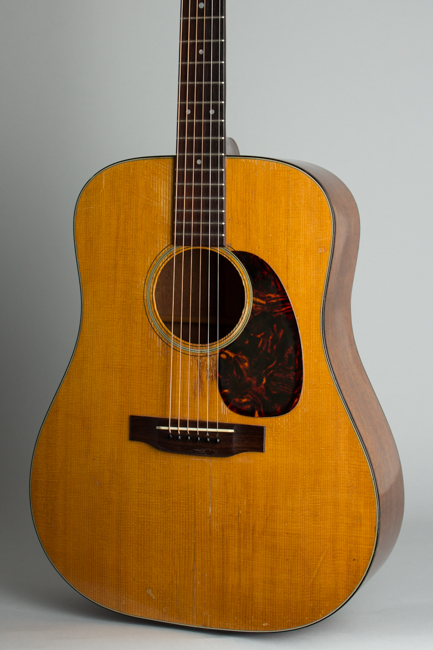 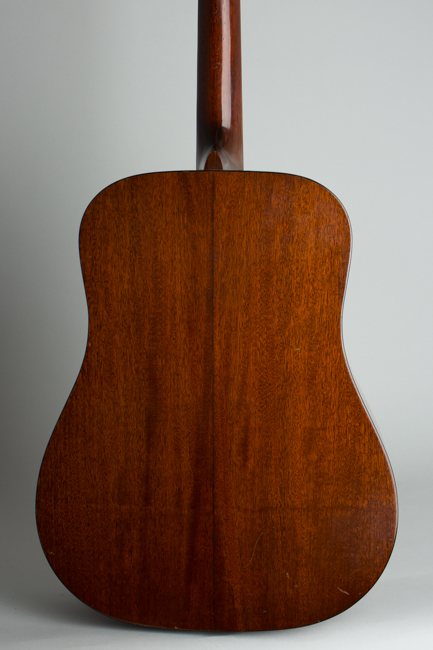 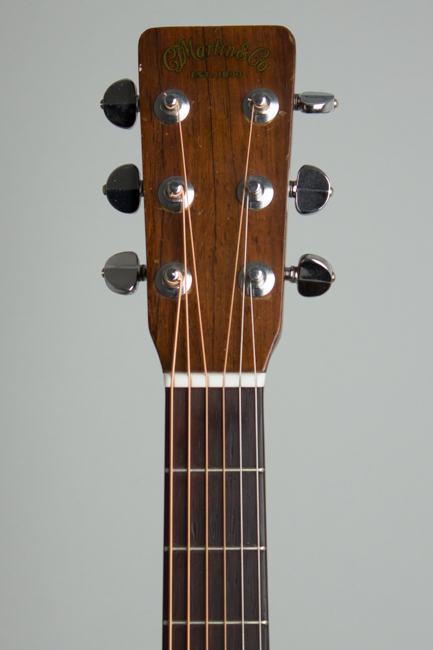 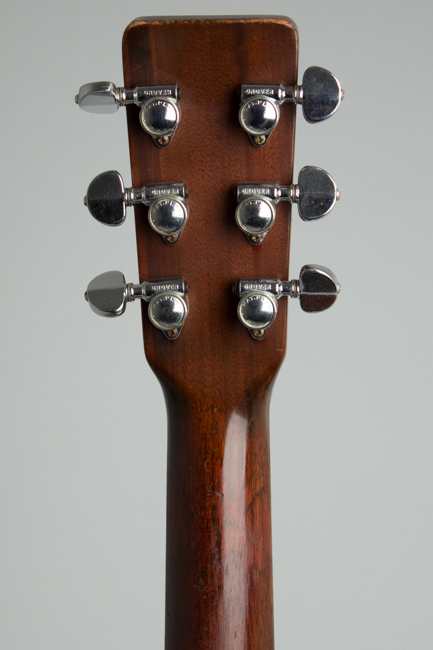 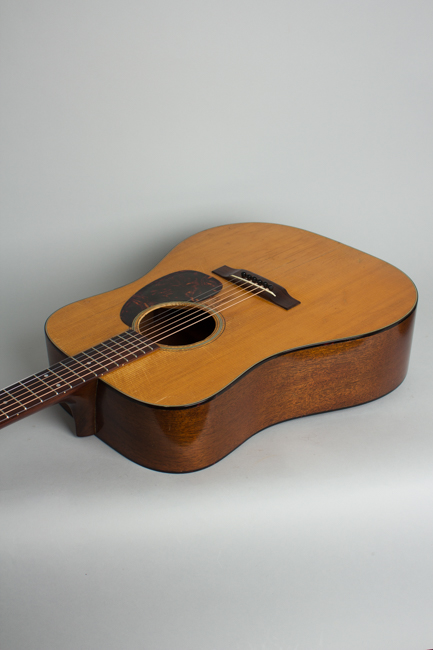 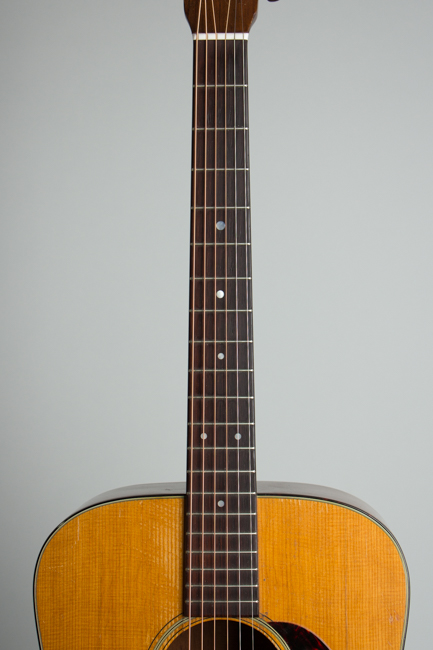 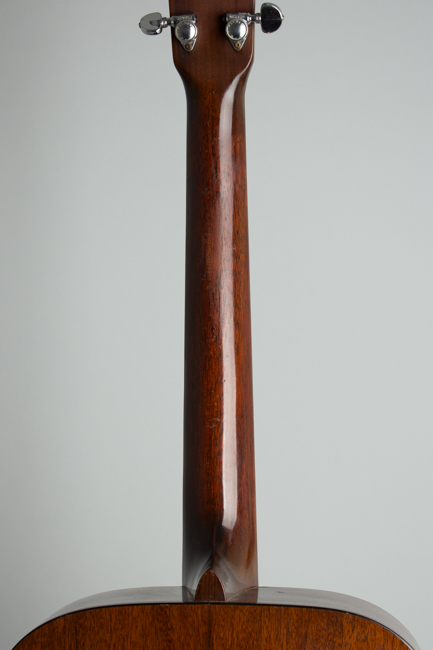 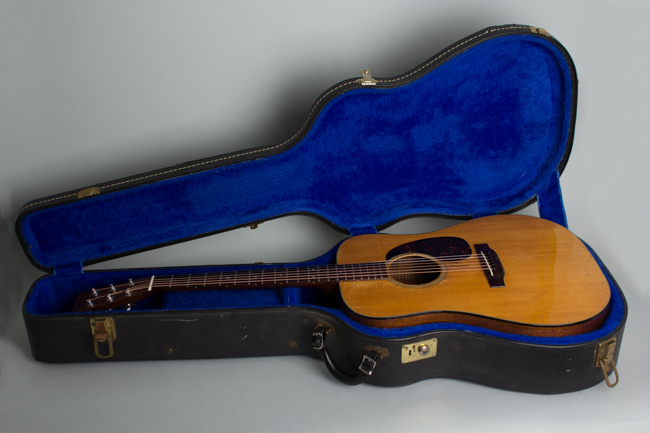 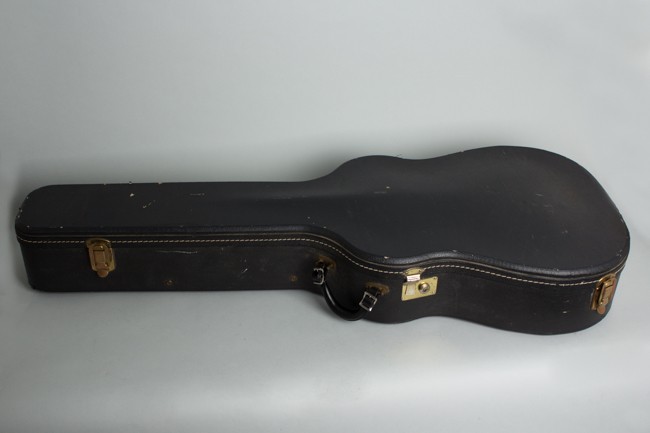 This is a well-played but fine-sounding D-18 from just after the end of the "Folk Era" of the 1960s, when electricity roared back into the guitar mainstream. Still, Martin's Dreadnought flat tops were steadily increasing in popularity, and would peak in the early 70's. From its introduction in the early 1930s on, the D-18 has been a workhorse for country, gospel, folk, and other forms of American vernacular music and in the '60's this only expanded.

In the 1960s the mahogany D-18 and its rosewood sister the D-28 were practically the emblems of the Folk revival, thanks in large part to the Kingston Trio. The Martin Dreadnought became- and remained ever since- the acoustic guitar of choice for serious pickers of just about every persuasion. Martin records indicate 1,126 D-18s were shipped in 1965; the next year that total nearly doubled to 2176. At $250 (plus case) this represented a serious professional level investment, but it was the ambition of a vast number of aspiring flat-top players to own one.

This D-18 has appointments typical of 1966, just before Martin made a number of changes to the instrument that are thought to diminish its vintage character. The pickguard and binding are tortoise celluloid, which would soon be replaced by black plastic. The original tuners are "Patent Pending" Grover Rotomatics, a new fitting on this model at the time. The headstock's "rounded" corners are characteristic of this period, the result of Martin's shaping templates having become worn from extensive use.

This guitar has seen a lot of use, it is a bit scruffy looking but has some history played in and the sound to prove it. It sings with a powerful, bright and clear sound, an excellent instrument for just about any flat-top application.

This D-18 shows a decent amount of wear overall but remains in structurally fine shape and plays very well. The top shows some notable finish checking and moderately heavy pickwear in several areas The most notable is a spot of wear well into the wood beneath just the strings above the pickguard. This has been patched in and touched up but is still quite visible. There is some loss to the wood on the lower soundhole edge and picking marks into the wood just above the fingerboard. The back and sides are comparatively clean showing some dings, scrapes and only light belt buckle wear into the finish. The back of the neck has some small shallow dents and the finish worn down to the wood over a decent sized area.

There are several repaired top cracks, one in the usual spot off the top edge of the pickguard, one along the top seam and another just below it. There is an old sealed grain split in front of the pickguard as well, with a "mirror image" on the bass side that shows a check that has never opened up into a crack. All the old repairs are solidly done but visible with no wholesale touch-up added. The back and sides have remained crack-free.

The neck has been neatly reset. The fingerboard and frets are relatively clean showing comparatively little wear; this is an older refret which looks very much like correct Martin work. The top of the bridge has been lowered just a hair, it looks like a correct Martin bridge but was probably replaced long ago, as it is the slightly older through-saddle design discontinued at Martin the year before this guitar was built.

There is an older 3-point under-saddle pickup installed, wired to an endpin jack. This is not state-of-the-art but is functional for gigging purposes. This D-18 looks a bit scruffy in friendly sort of way but plays and sounds lovely, with a nice combination of power and sweetness. Overall Very Good + Condition.
×