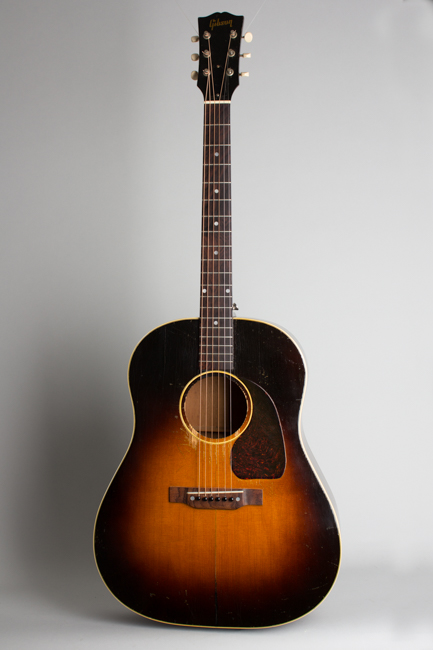 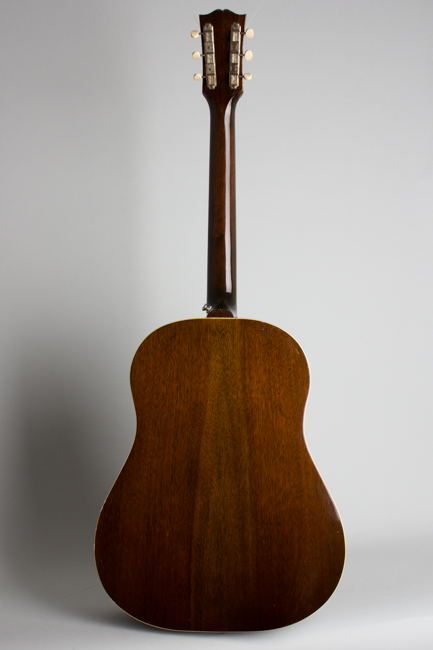 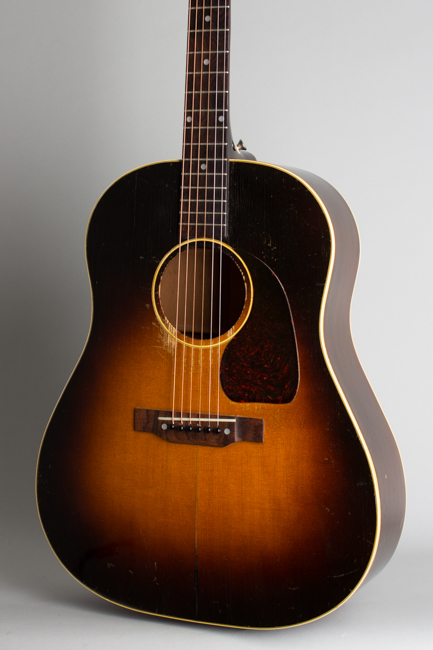 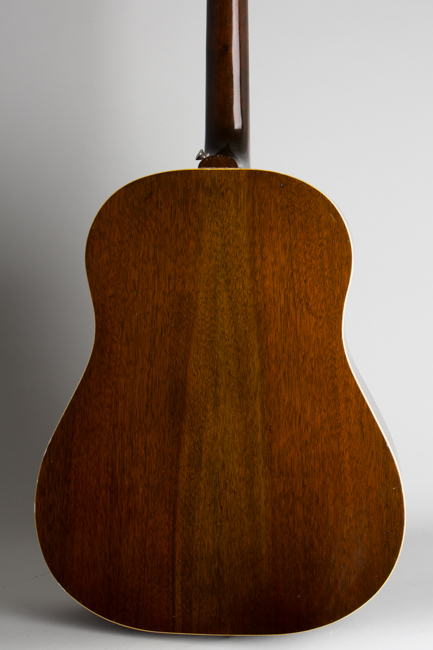 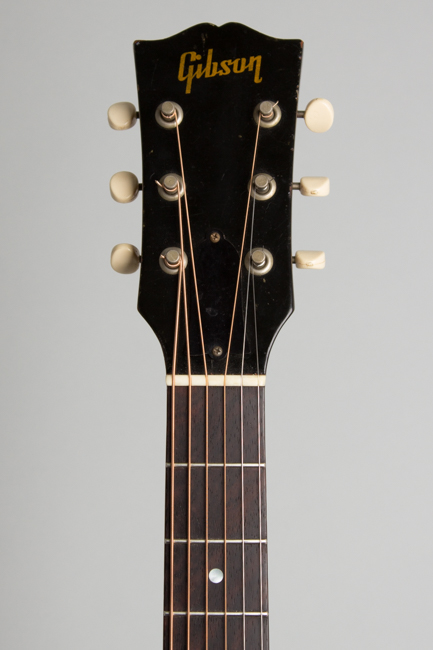 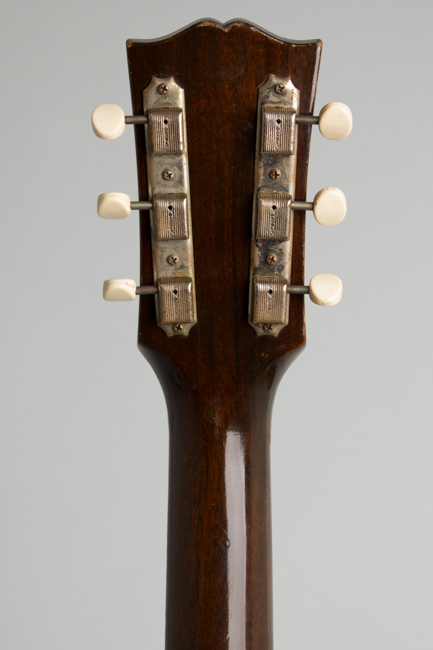 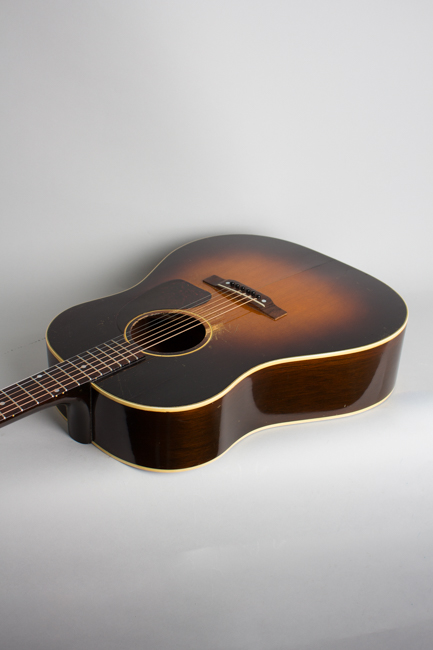 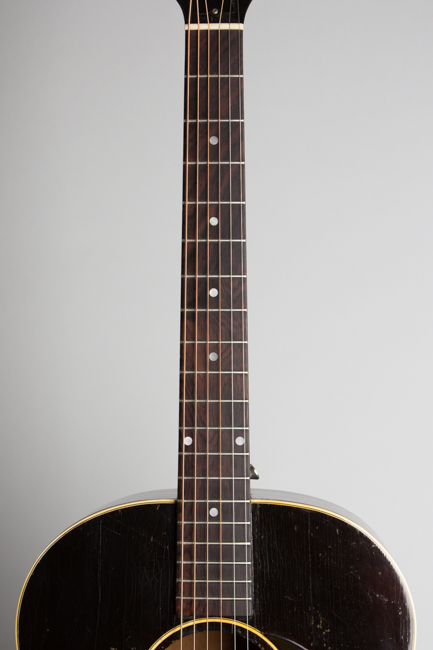 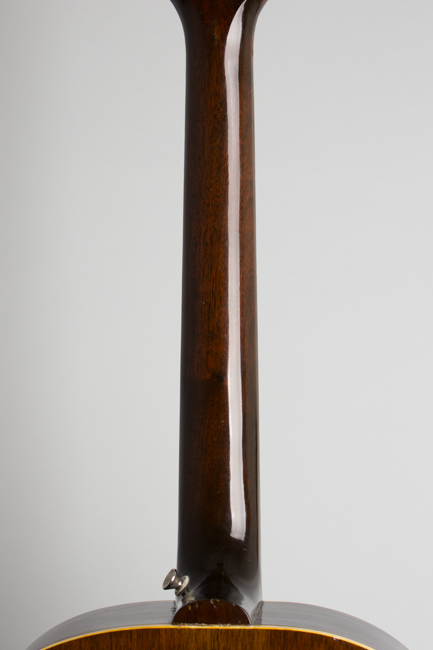 Gibson's slope-shouldered Jumbo guitars have remained enduringly popular since their 1930's introduction with folk, blues, and pop players, and picking this one up it's easy to see why. This early 1950 J-45 shows some wear and repair for its 70 years on the planet but remains a superb player's instrument. The comfortable slim-profile neck is much sleeker than the chunky wartime spec that continued up through the late 1940s, and this is a super friendly instrument to play.

This J-45 shows some typical wear and old repairs but remains original and in fine-playing shape. It has period features, including small tortoise celluloid pickguard, headstock fitted with the earliest pattern Kluson Deluxe strip tuners and "modern" gold decal Gibson script logo on the face. The Martin style bottom-belly rosewood bridge on this guitar was a vert short-lived feature. It appeared in 1949 and by later in 1950 Gibson reversed the bridge to a "top belly" pattern, probably to make it look less like their competitor's design.

We always love J-45s from this period. Whether near mint or heavily worn, they are always classics in both looks and sound. This model really exemplifies the best of Gibson's "workingman's Jumbo" with no frills but plenty of splendid tone. This example is an excellent player despite its minor battle scars with a big, rich, but still well-defined sound that can really cut through the mix when pushed.

Overall this is a great playing and sounding example of this 1950 Gibson stalwart, showing some play wear and old repair work. The finish shows typical wear overall with its share of dings, dents, and scrapes. The heaviest wear is localized around the soundhole rim, where it looks like someone played with thumb and fingerpicks long ago. The remainder of the top finish is better preserved with typically checked patina and only some smaller dings and scratches.

The top shows several old repairs. The center seam behind the bridge to the back edge has been resealed, probably long ago with a splice and some topical touchup added. This is not the prettiest repair but it is solid. The upper bouts have "mirrored" grain cracks on either side of the fingerboard edge and spots about halfway across. All are solidly sealed with some noticeable touchup on the upper bass side; the split on the treble side does not appear to have gone through to the inside. The area under the upper soundhole rim has small cleats added below the fingerboard. There are no cracks to the back or sides, just some finish checking.

The neck has been reset; the saddle is low but the action is very comfortable. The frets appear to be original or possibly an older refret with the exact period wire; they show some fairly light wear that does not affect play. A strap button has been added to the treble side of the heel. The endpin is the hollow metal piece that used to come with DeArmond soundhole pickups. This guitar plays and sounds great with the typical Gibson ring, warm and sweet but never mushy. A fine gigging or recording J-45 which lives in a sturdy 1970's era HSC. Overall Excellent - Condition.
×