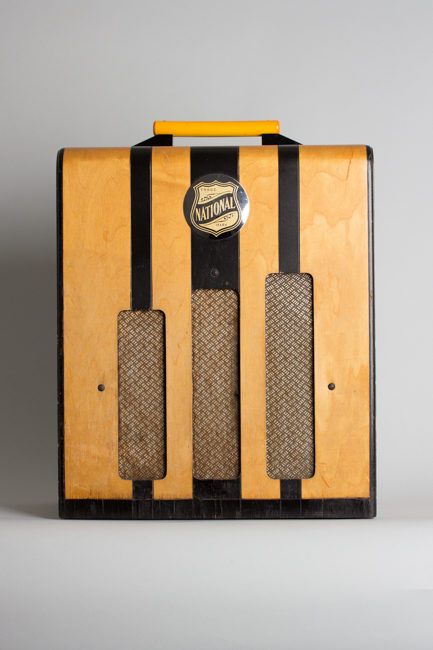 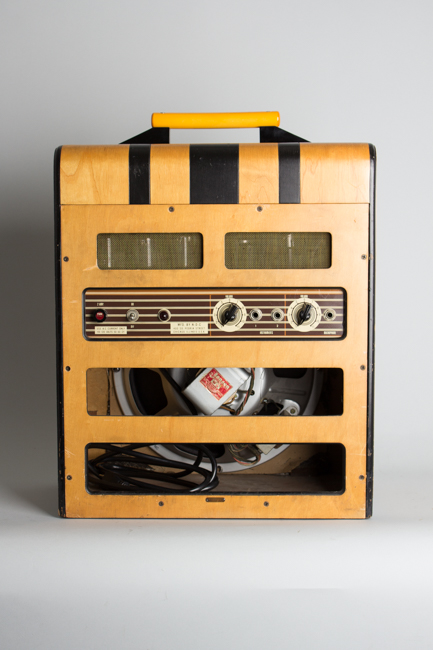 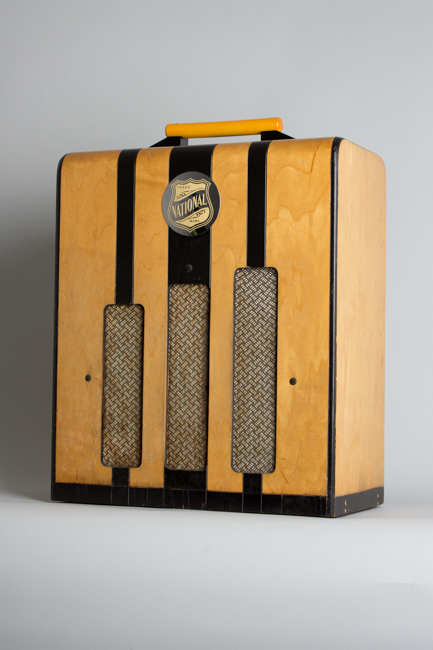 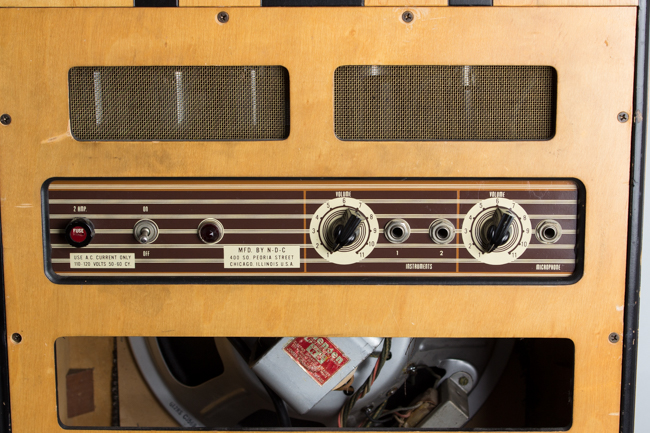 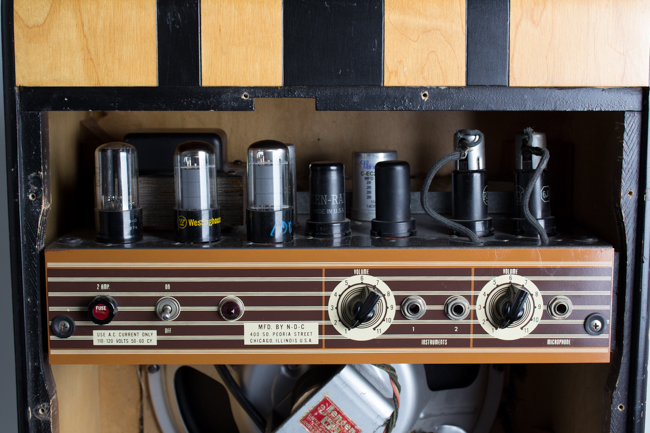 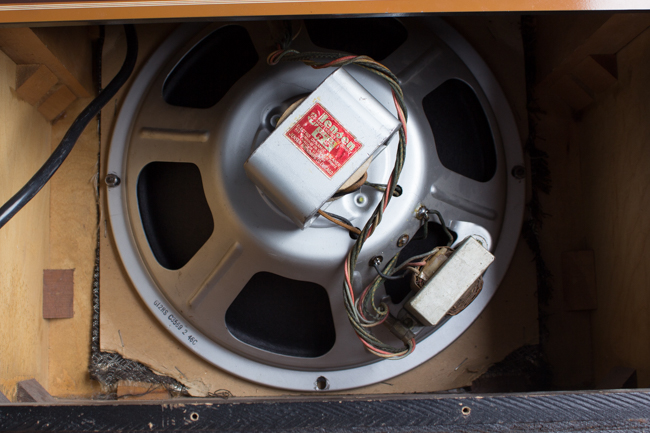 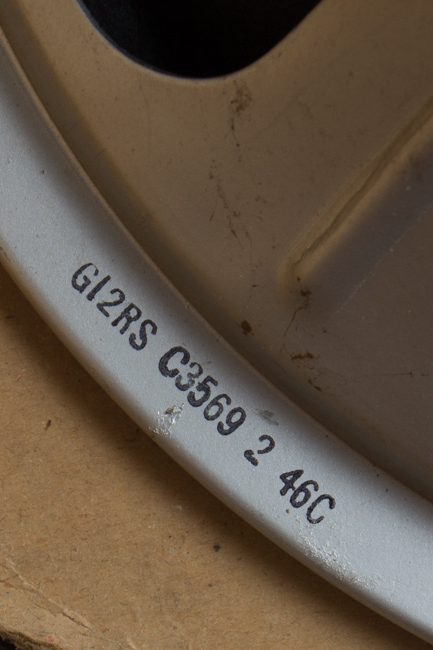 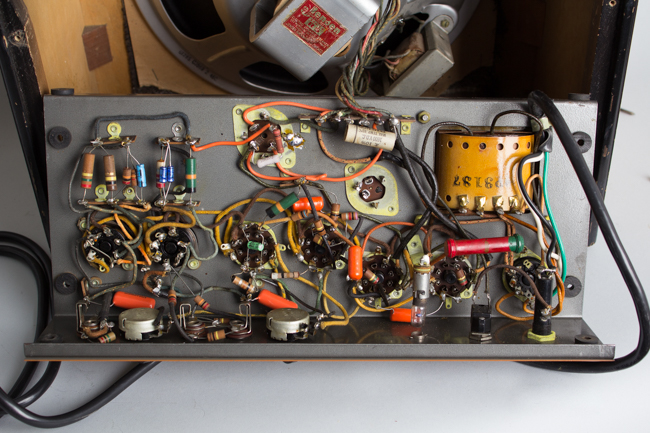 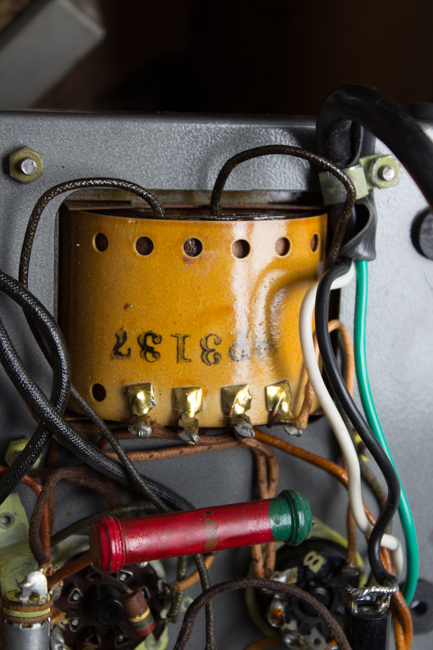 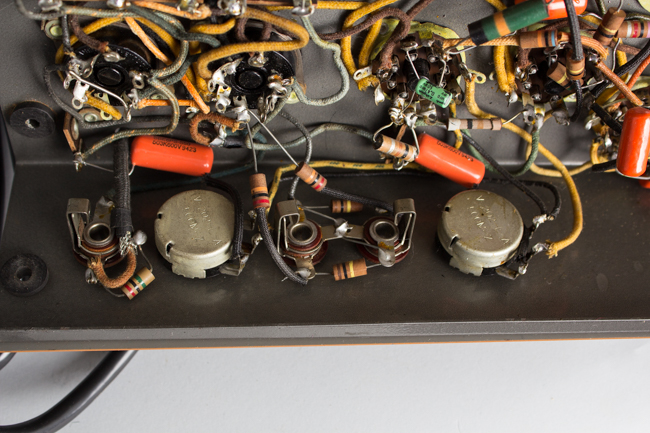 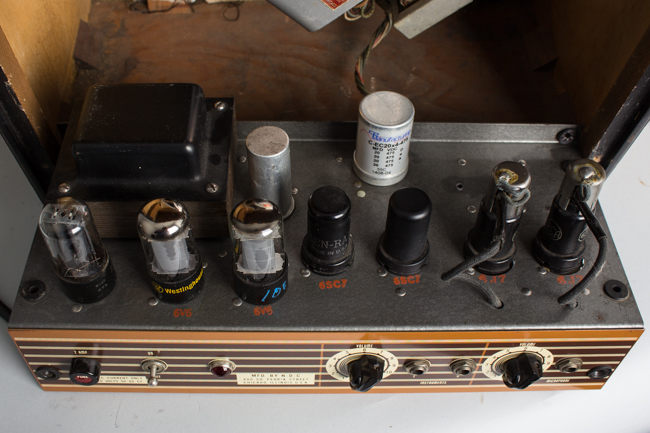 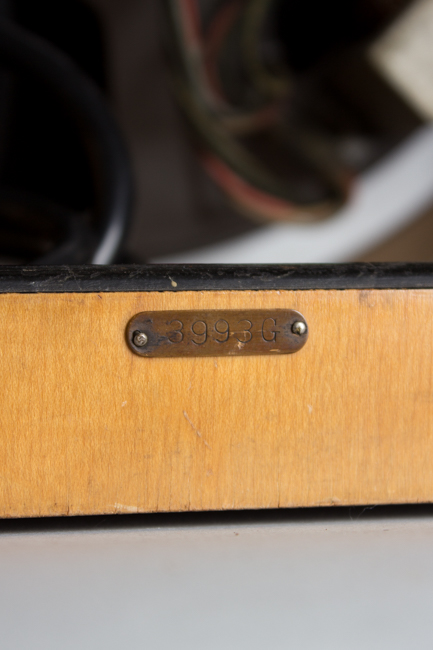 This very attractive high-end pre-war amplifier was built by National Dobro Corporation, the top of their premier National amp line around 1942. Listing at $120, the Model 500 was more expensive than anything Gibson, Rickenbacker or Vega offered and in the same price range as the high-end Epiphone amps. While it was not the most powerful amp of its time, the vertically striped wood-veneered cabinet and large metal National logo badge made it one of the most striking. Even the large solid handle has a distinct Deco elegance. The war soon put an end to commercial amplifies, so this classy model was only offered for a short time.

Exactly what did the ambitious musician of 1942 get for the princely sum of $120, besides great looks on the bandstand? The Model 500 puts out 16 massive watts into a Leviathan 12 inch speaker, as found only in the high-grade amps of the day. It has two channels, one for instruments and one with higher gain intended for microphones. There is no tone control, so it offers only a single preset tone, but at least it is a great sounding preset! The microphone channel especially can provide some really nice saturated overdrive, fearsome but perhaps not quite Spinal Tap worthy even though the controls DO go to eleven. The sound is never really clean in the modern sense, but then again it is from the early 1940s and that's not what we look for in these amps anyway.

This Model 500 example is in very nice condition overall. Externally it is quite clean; there is a bit of chipped-off veneer on the bottom front, not unusual for old wood-covered cabinets. Internally all the major components are original including the Jensen RS-series field coil speaker. The amp has had our standard routine maintenance, been fitted with a grounded 3-prong power cord, the sockets, pots and jacks have been cleaned and all electrolytic capacitors replaced. It has been biased to spec. The sound is warm and woolly, as was the norm for guitar amps of the time, with a very pleasant and articulate midrange, which is less common with the Gibson contemporaries of the era. This is a fine and superbly preserved example of this excellent pre-war amplifier, the finest that National-Dobro offered. The original canvas cover is included. Excellent Condition.
×