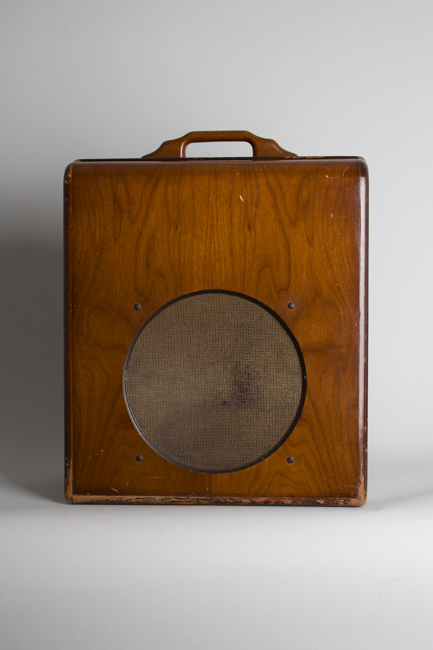 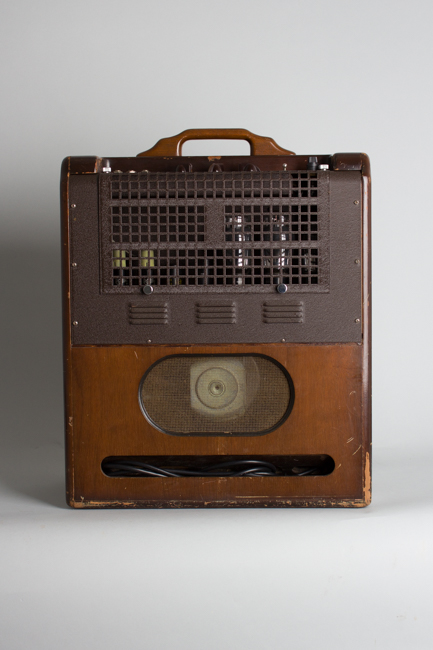 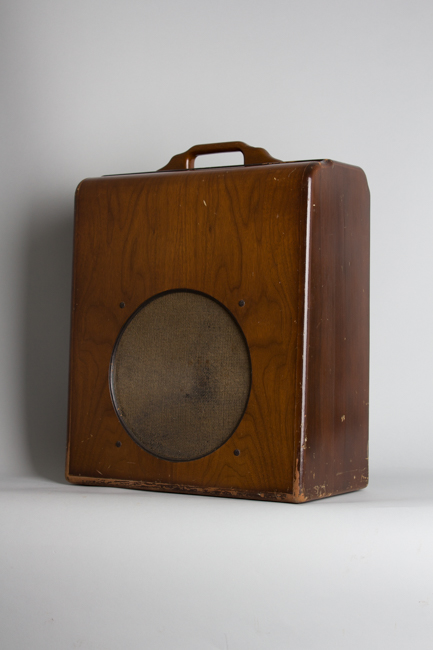 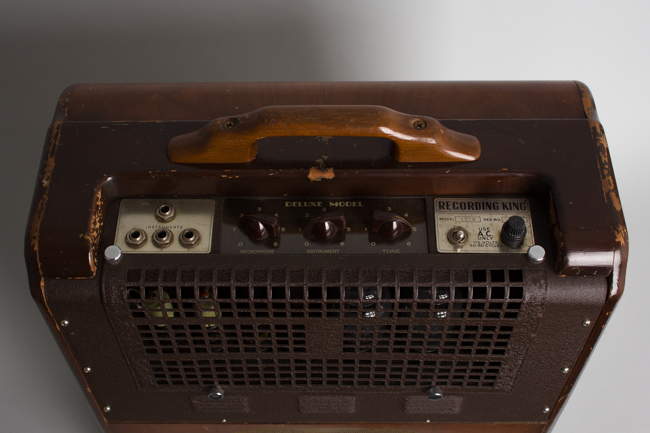 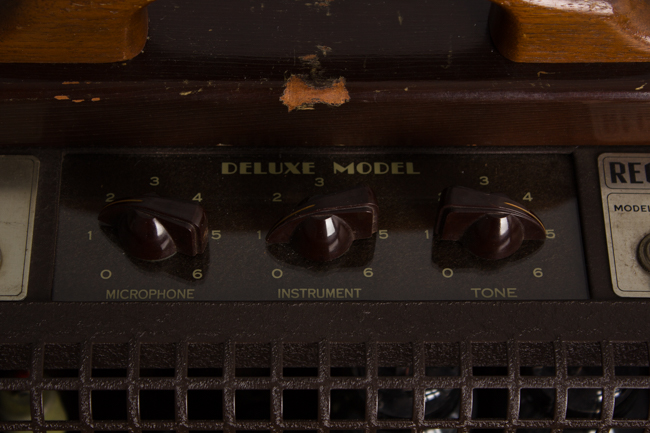 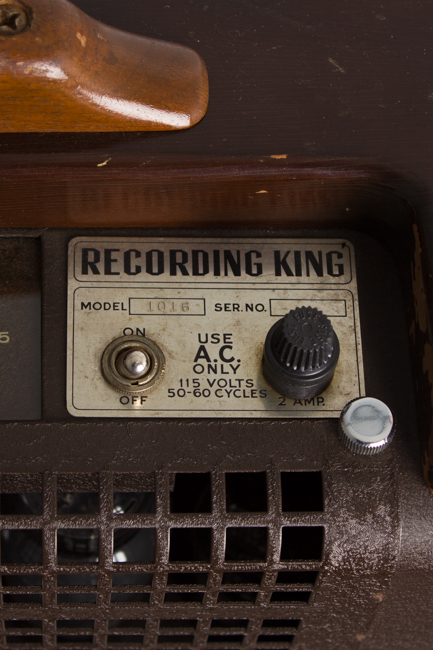 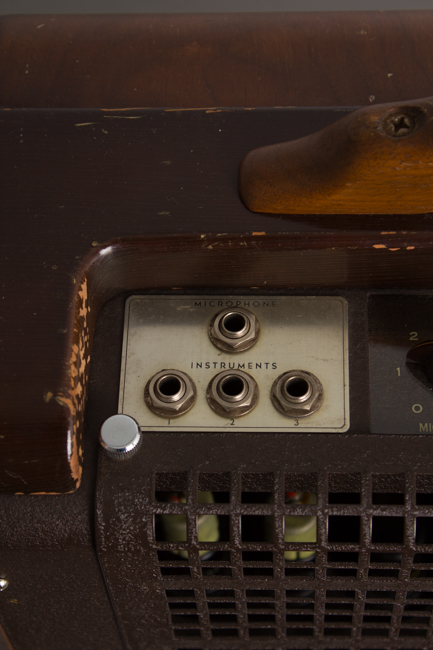 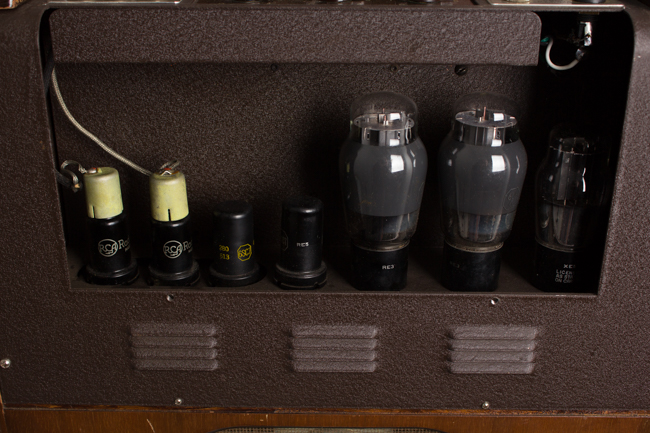 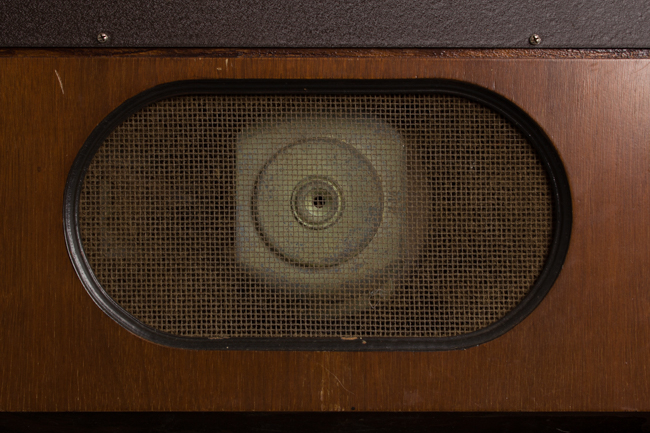 The Recording King brand was applied to musical instruments sold in Montgomery Ward catalogs in the 1930s and 1940s, with the actual product sourced from a number of builders. For a few years in the early 1940s, one of those was the National-Dobro Corporation, reorganized into Valco in 1942. In 1941-2 Wards catalogs featured the "Recording King DeLuxe Hawaiian Electric Guitar", a lap steel largely resembling the National New Yorker. The accompanying amplifier was catalogued as the DeLuxe Model 1016, also built by National-Dobro/Valco. Aside from a few cosmetic changes, it was identical to the National DeLuxe Model 100, the top of the National amp line in 1939-41.

The Recording King 1016 differs slightly from its full-brand sibling, mostly in lacking the National's distinctive trademark shield-shaped grill cover. Otherwise, the only real change was in the name on the control panel. The heavy wooden cabinet is nicely finished in a translucent brown lacquer. The amp runs on a pair of 6L6s, sending a princely 16W through a 12" field-coil speaker. The rest of the tube complement consists of 2x 6J7s, 2x 6SC7s and a 5V4G rectifier tube.

The control panel features has two channels, one marked for "instruments" and a higher-gain input for "microphone", each with its own volume control. The "microphone" input is quite sensitive as was standard at the time and can be used to achieve a glorious growly overdrive. There is also a “special tone regulating control” (still a luxury feature in the early 1940s) "that will adjust the tone quality to meet the various acoustical problems that are encountered in different locations" according to the National catalog. Perhaps coolest of all is a nifty back-lit control panel. This is a superbly well-made amplifier for its time, and still sounds great today 80 years on.

Overall this is a very nice example of this relatively rare pre-WWII amp. There is wear to the cabinet finish, with scratches scuffs and a few worn away areas mostly on the edges but internally it is quite clean. It remains original except for the basic electronic service required to keep it running 80 years on. There has been a standard cap job and cleaning of all sockets, pots, and jacks, and the addition of a three-prong grounded cord. As is typical with some amps of this vintage it can be a bit noisy starting up, but once warmed up is a powerful tone machine, easily the equal in both build quality and sound to the better known Gibson and Epiphone amps of the period. With a period archtop it offers a perfect 1940's tone, while with a more "modern" solidbody (like a Fender) it adds a lovely warmth and depth. One of our favorite recent finds in an unsung vintage amp. Overall Excellent - Condition.
×