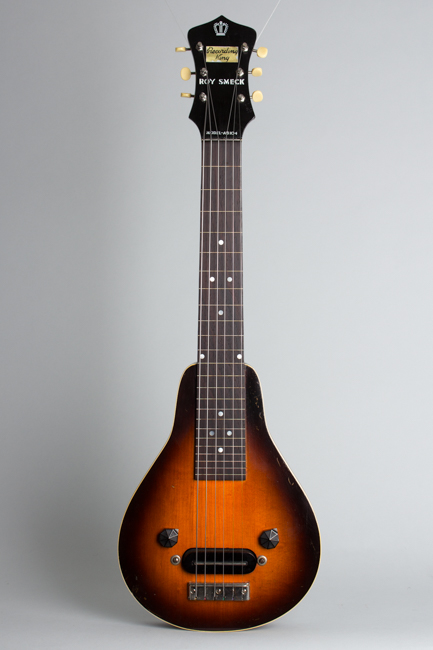 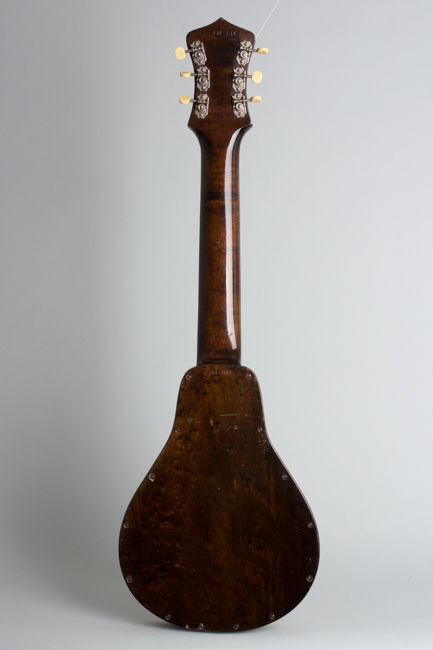 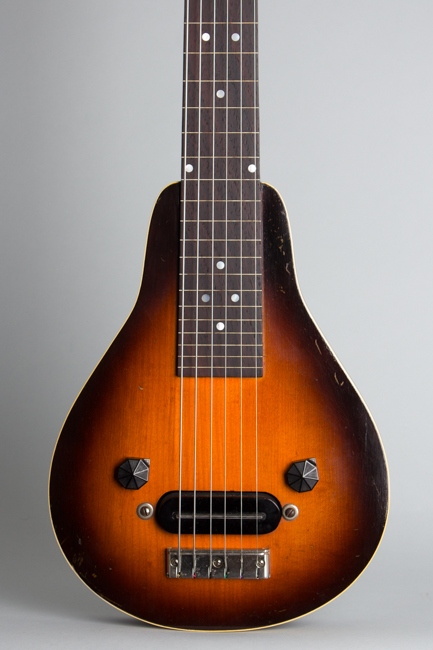 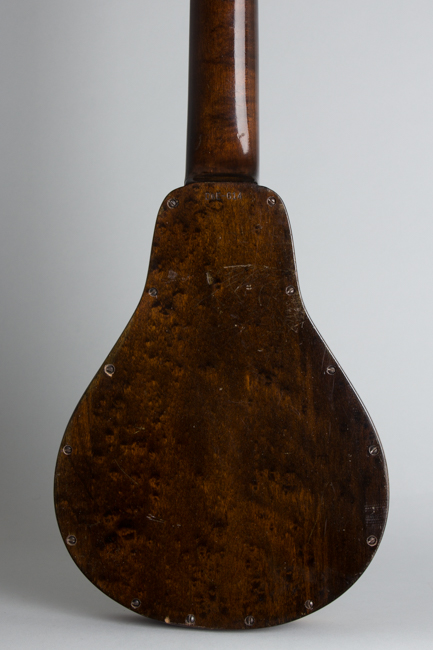 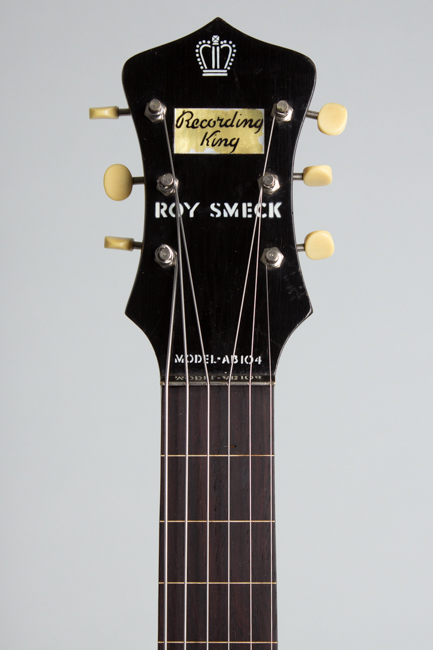 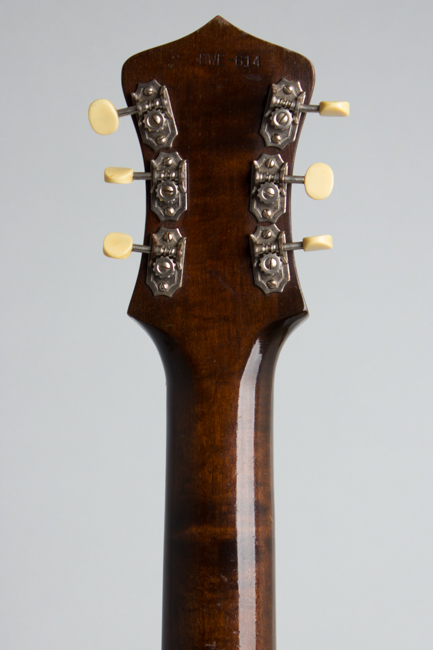 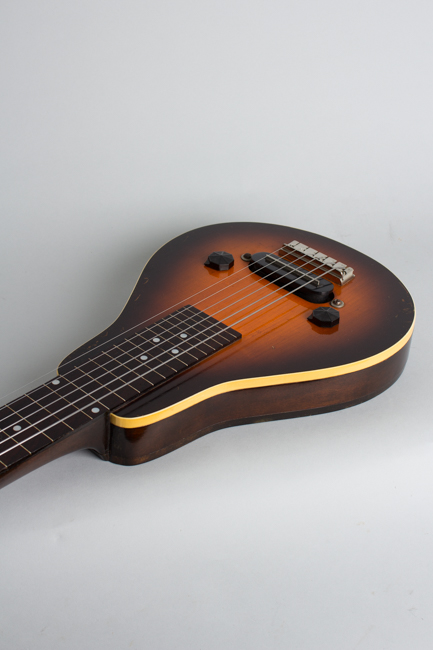 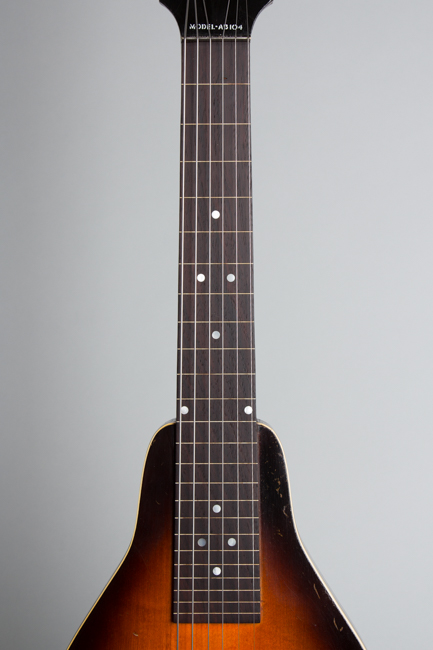 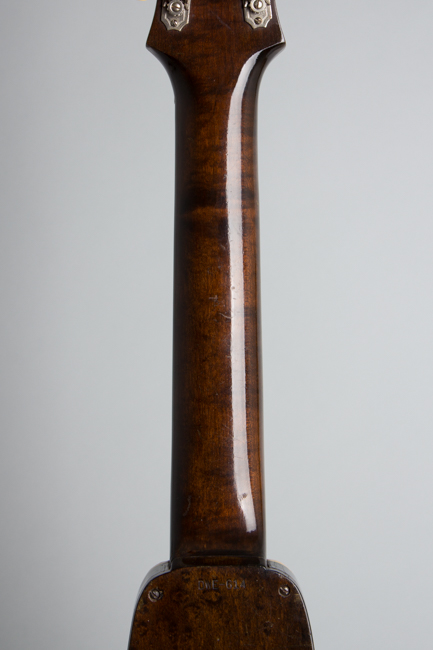 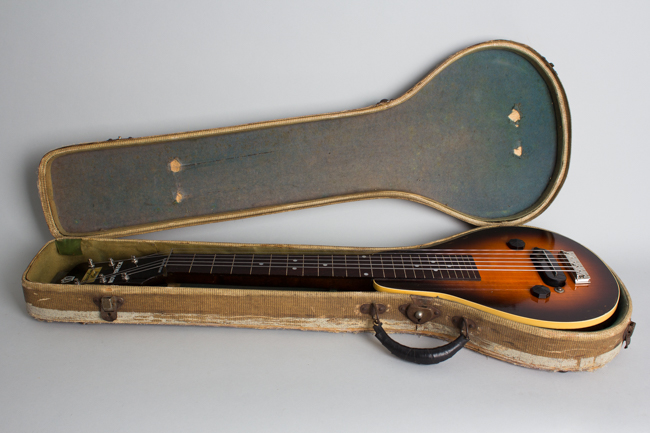 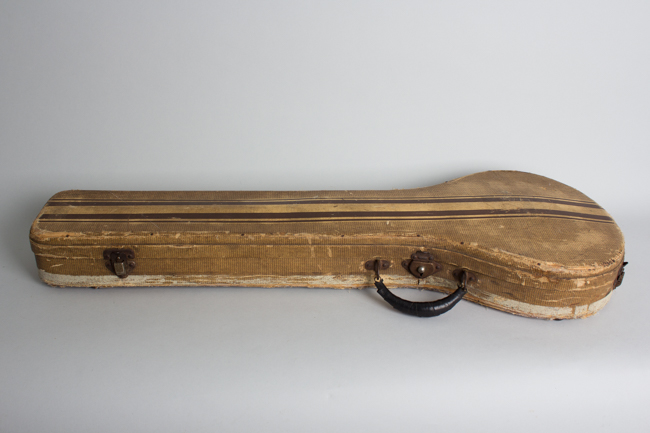 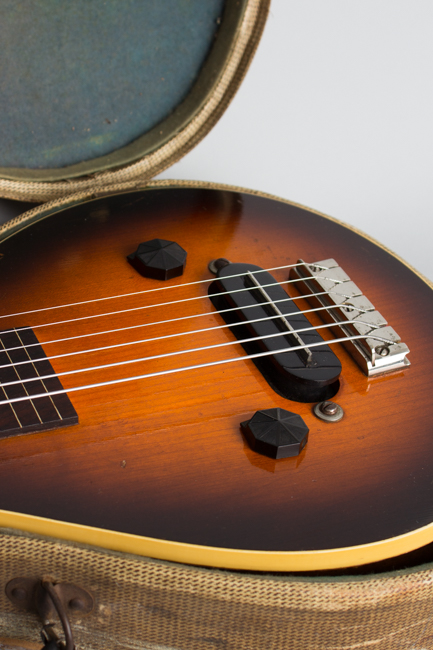 Sometimes it seems Roy Smeck would endorse anything with strings on it. In the 1930's he mostly lent his name to Gibson, or in this case product they built for the Montgomery Ward's catalog and stores. For the Ward's line Smeck's name was specifically used to promote a series of electric guitars, mostly commonly as in this case Lap Steel models but also a rare electric Spanish. This vaguely teardrop-shaped guitar is labeled the Model AB-104 on the headstock and dates to mid-1938, making it one of the first of the Wards/Smeck line.

Gibson's 1930's EH-150 with the "Charlie Christian" style blade pickup is generally considered the best lap steel guitar in the company's history, one of the most successful instruments of its type. This 1938 Recording King model would be one of the first spinoffs of the parent Gibson, an early example of a Ward's catalog electric that offered pro quality at a budget price. It is equipped with the second generation blade pickup with the smaller U-shaped magnet underneath but the same basic coil structure as earlier models. The coil itself has rounded ends and is not bound, with a single blade polepiece in the center. The screwed-on back of the body is a holdover from the original 1935 EH-150 design.

The tone and volume knobs are on either side of the pickup; the output jack is located on the bass side of the body. The bound top is finished in sunburst while the back and sides are a plain dark brown. The fingerboard is unbound with flush fret markers and plain dot inlay. The center-peaked headstock mounts individual Kluson tuning machines are a style specific to the 1938-40 period with plastic buttons and a nice Deco look.

While not technically a full-line Gibson this Roy Smeck model still plays and sounds like one; these semi-hollow maple steels from Kalamazoo have a rich, powerful tone with plenty of definition. This one has seen some use over the last 80+ years but survived nicely intact and remains an excellent playing and sounding steel with a uniquely cool look.

This 80+ year old steel shows some general wear but no repairs or alterations. The finish has numerous dings and dents but no heavy wear except some scratching to the back. The stenciled-over-pearl Recording king logo has not flaked off as often happens. All hardware is original and intact. The guitar is housed in the nifty original shaped case which is VERY battered but still functional. Excellent - Condition.
×