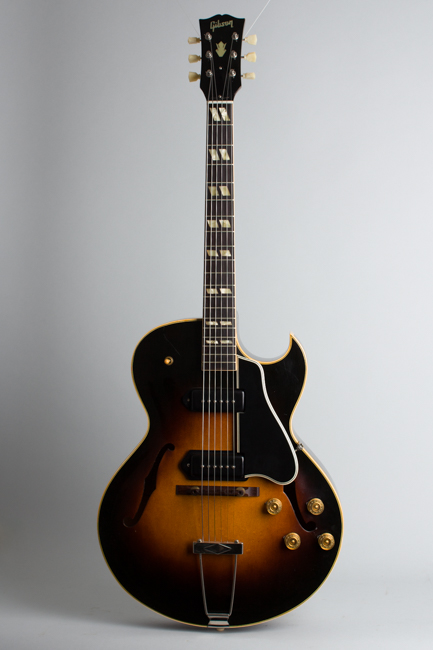 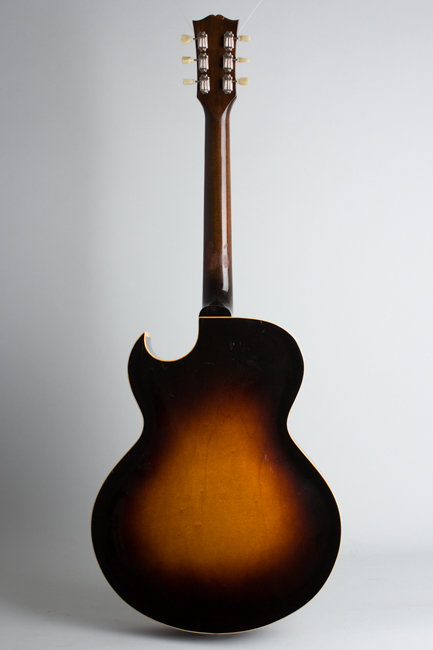 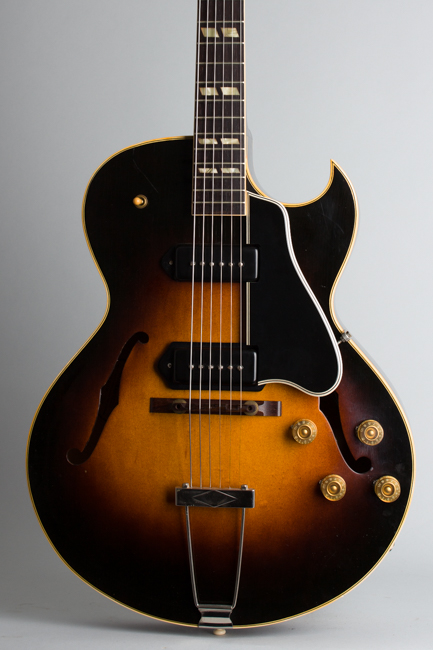 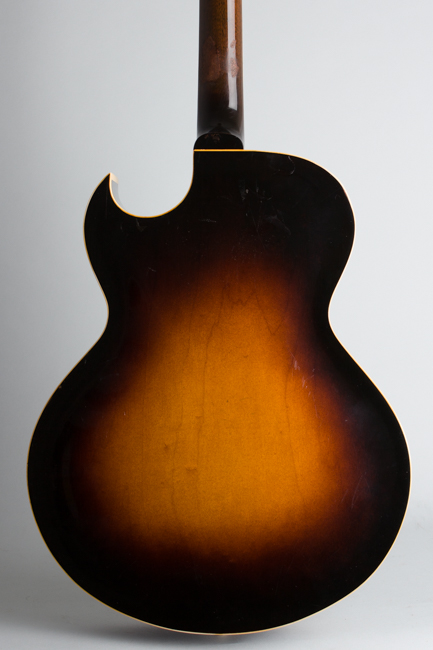 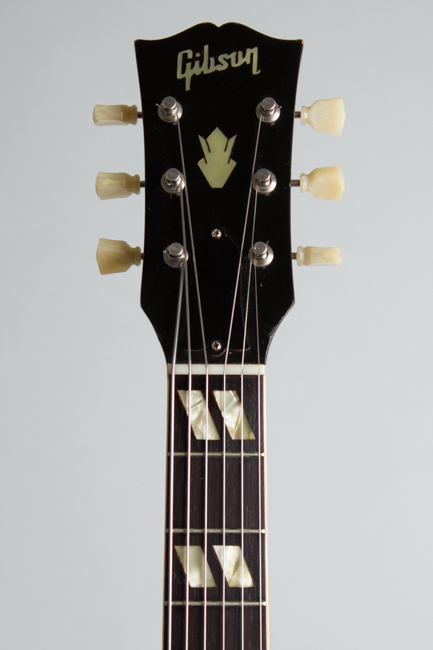 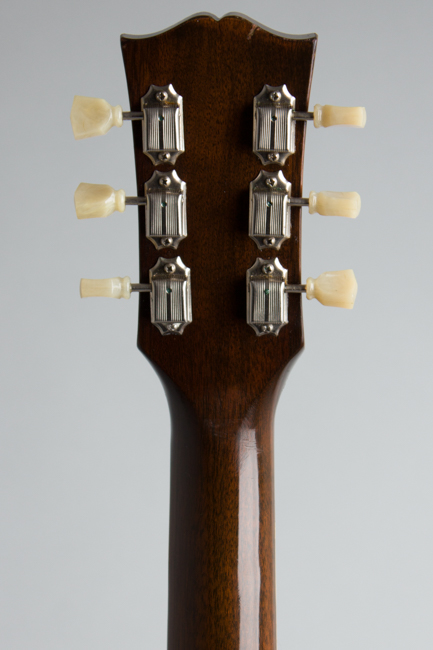 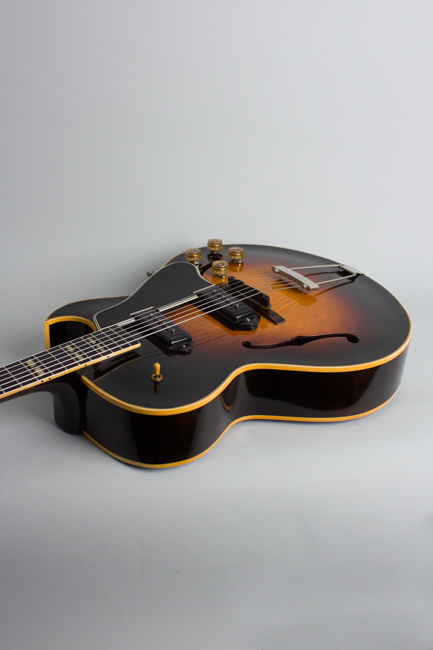 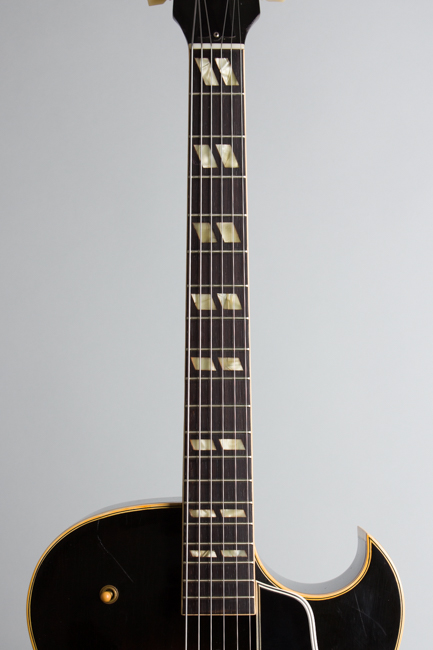 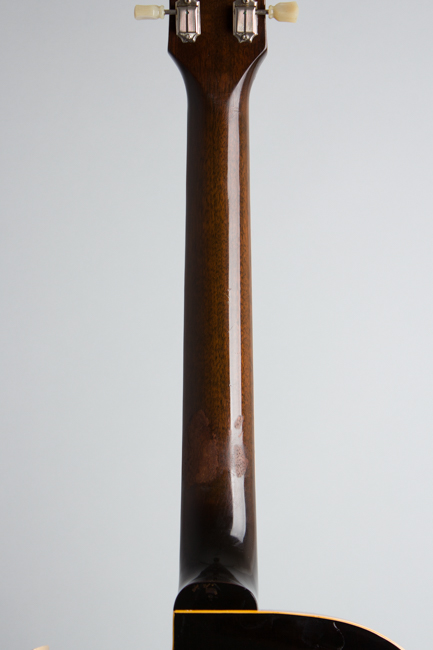 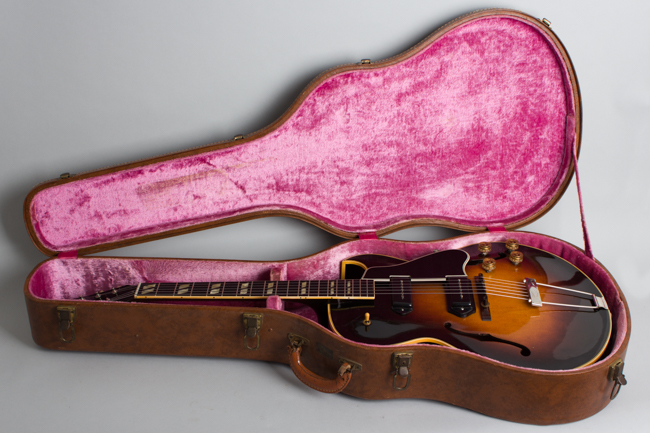 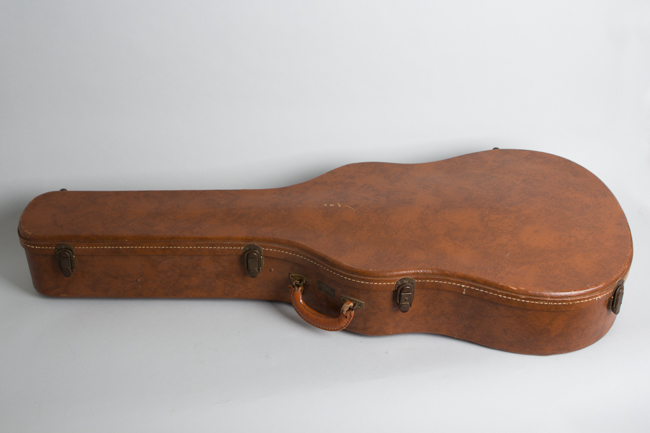 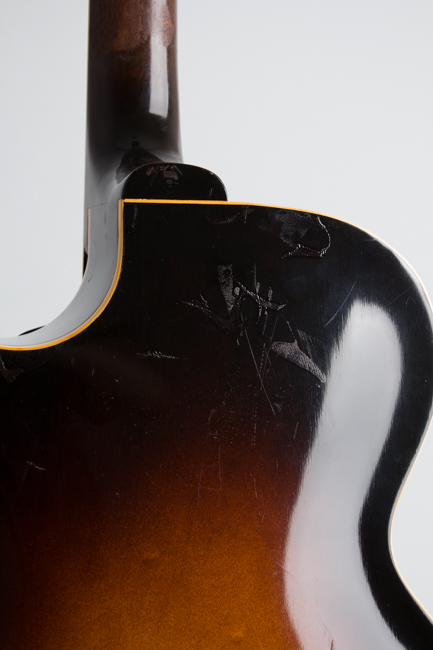 This is a nice example of first year ES-175D, the more versatile two-pickup version of Gibson's classic "Working Man's" hollowbody archtop guitar. When this one was built in the fall of 1953 the single-pickup ES-175 was already an established success with players for its combination of sound and playability at a moderate price. The ES-175 first appeared in 1949 but the two-pickup ES-175D was not catalogued as a stock model until 1953 (a few custom examples had been built earlier). The second pickup at the bridge creates a wider sonic palette, although many jazz players (even today) prefer the sound of the neck PU alone. All other features of both models were the same, the "D" just adding the extra pickup, knobs, and switch to the mix.

The sunburst laminated maple body is triple-bound on the front and single-bound on the back; the neck is single-bound with split parallelogram fingerboard inlays. The headstock carries the pearl Gibson logo and crown inlay and Kluson Deluxe tuners with "keystone" buttons. The original hardware includes double P-90 pickups with black plastic covers, the standard Gibson rosewood bridge, a 5-ply beveled-edge pickguard, earlier L-7 style tailpiece, and tone and volume controls with amber "hatbox" knobs.

The Gibson label bears an "Artist" serial number dating the original shipment to September 1953. As a new model at the time the ES-175D was just getting established; only 182 were registered as shipped this first year. This era's ES-175 has been used by too many jazz guitar greats to count; double-pickup examples like this one are fully suitable for that classic "Blue Note" sound but also make great early rock'n'roll, rockabilly and R&B guitars.

Overall this is a clean, nicely original guitar. It does not show much play wear at all BUT there are several areas of the finish showing what is colloquially known as "strap burn", with crazing marks into the lacquer but not through it. This is not uncommon on old instruments left in contact with vinyl or rubberized straps or cables for long periods of time; unfortunately it is often ones like this that were put away unplayed for decades. These marks are most noticeable on the back, with several fairly large zones most visible when examined in direct light. The face shows a few smaller marks near the switch, but is overall not much affected.

There is a decent size area of finish rubbed down to the wood on the back of the neck in the 11-12th fret area; we'd guess some "strap burn" occurred there as well and it bothered someone enough to sand it off. One spot goes into the wood a bit but ii it not distracting when playing the guitar. Beyond this one area the rest of the neck finish shows only a few tiny dings and dents.

Apart from the apparent vinyl damage the finish shows some very light checking but exhibits only minimal play wear for 68 years on the planet. There are no notable repairs or alterations to the instrument. There are scattered small chips and dings to the finish, a tiny plywood check around the jack, and some scuffing here and there. Really this guitar does not appear to have been played much; just left in the case (possible for decades) with one or more unfortunately reactive straps!

The 3-way switch is an unplated brass Switchcraft part; it is not exactly what we usually see Gibson use in this period but the solder joints appear unaltered so it may be original to the guitar, or a very early replacement. The switch tip fitted is a repro, at any rate. All other fittings and hardware except the tailpiece are original to the guitar and show very little wear. The tailpiece itself is a typical Gibson part but later vintage; the original early 1950's ones often sheared at the hinge and many have been replaced.

The neck angle is excellent, the original frets show hardly any wear and this is an excellent playing instrument. The sound is the typical warm 1950's Gibson tone, with the brighter honk of the bridge pickup that can be added if desired. Apart from the ravages of an errant vinyl strap this is a super nice example of a 1950s 175D, complete in the original brown HSC that is also very well preserved. Excellent - Condition.
×