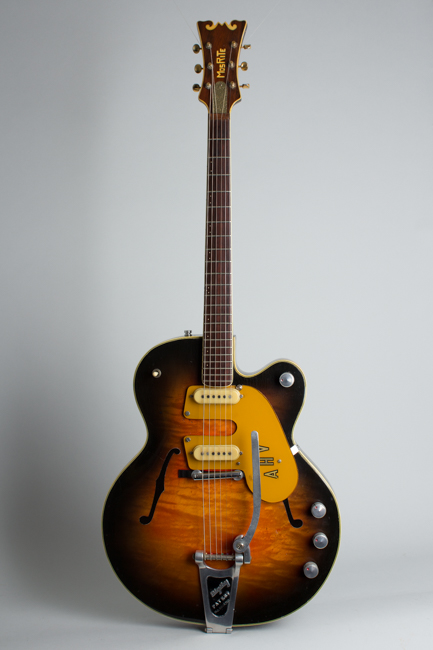 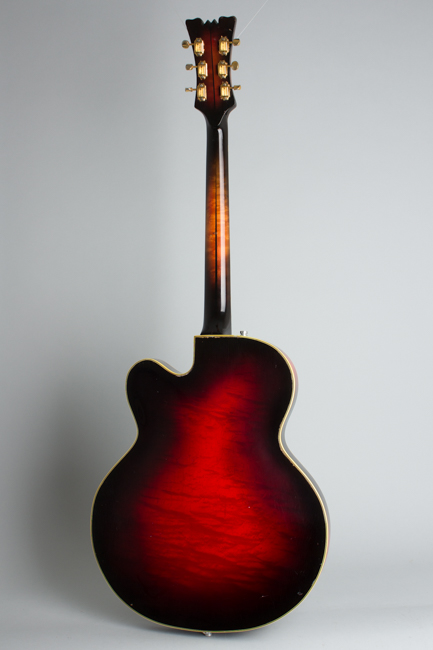 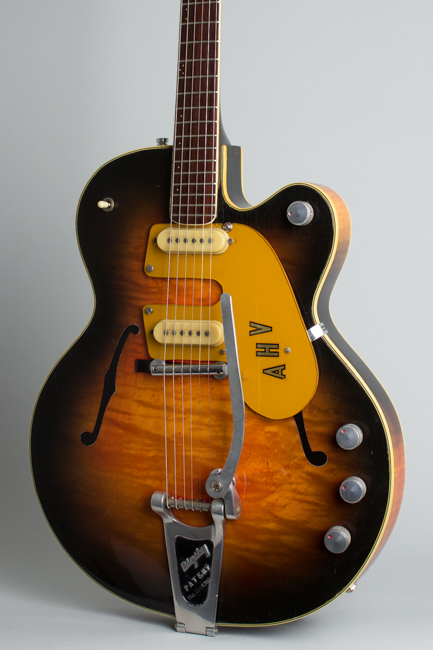 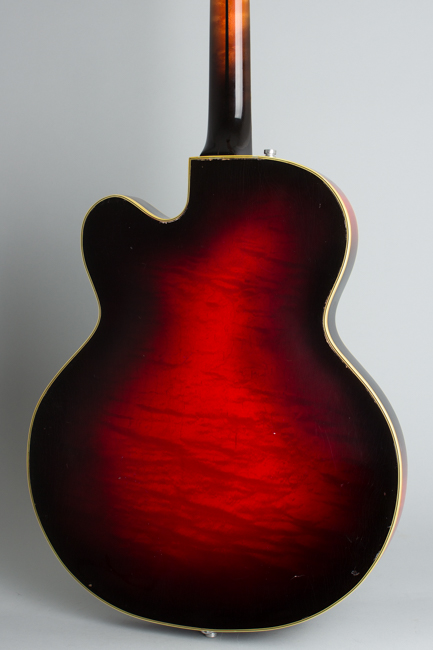 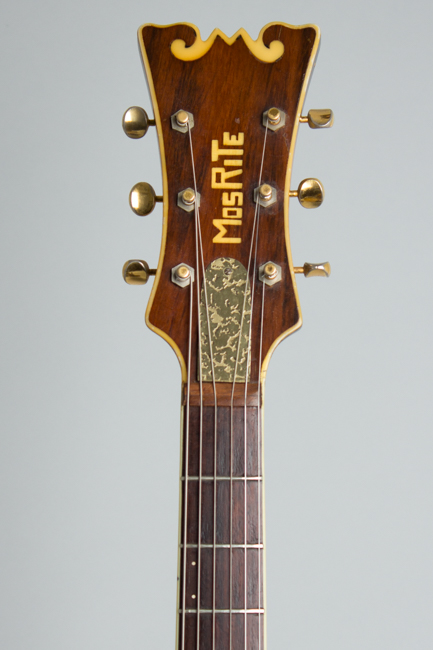 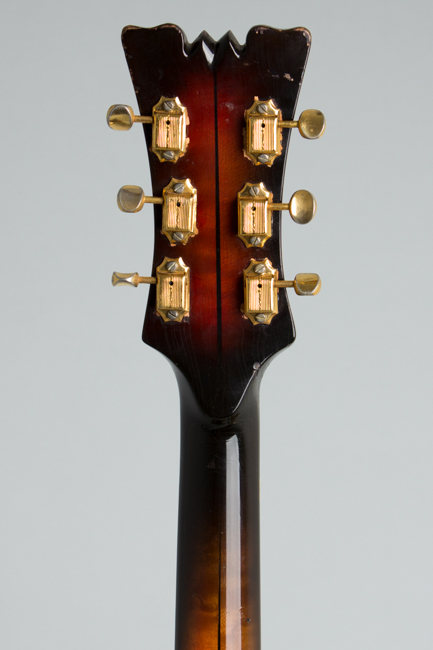 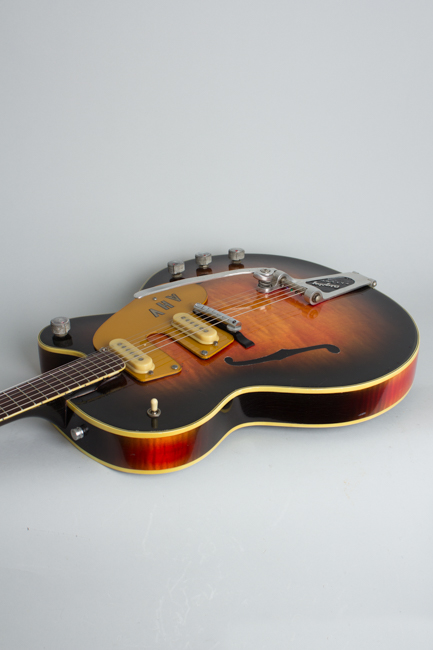 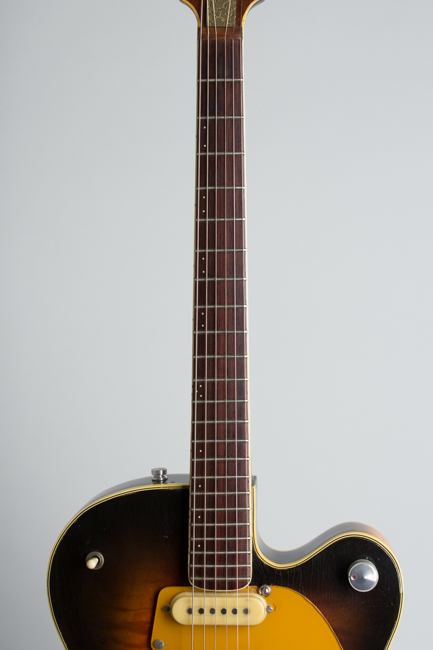 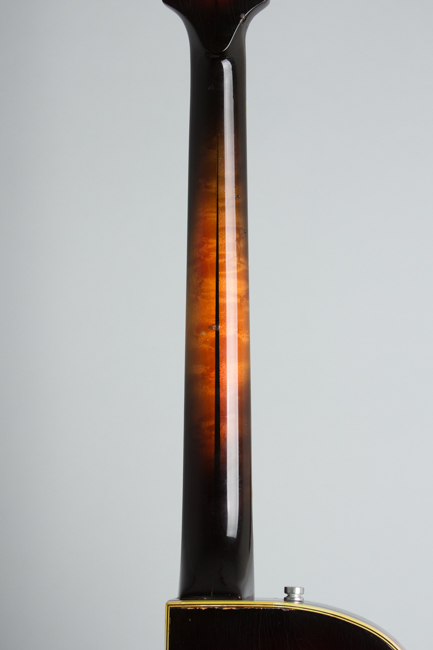 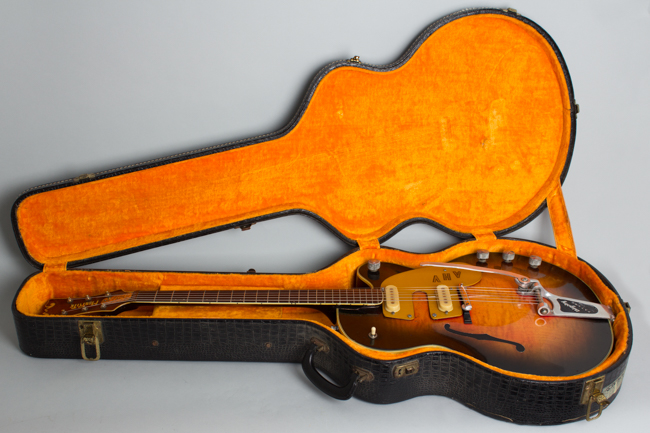 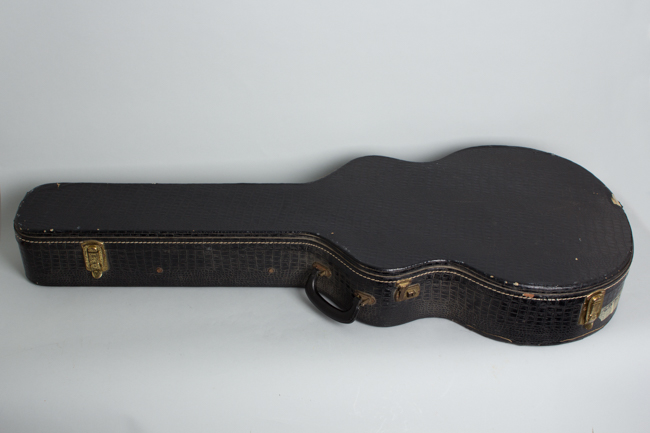 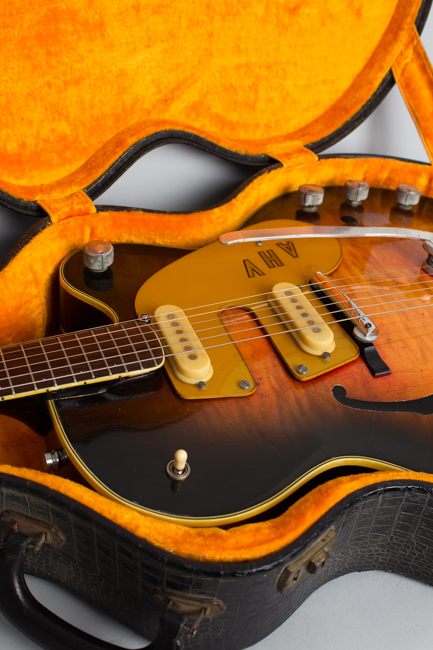 This is a super cool and unique one-of-a-kind guitar, a custom Mosrite hollowbody built on the chassis of an early Gretsch Country Gentleman. It has the initials "AHV" on the pickguard, likely a "hotshot hillbilly" player in southern California who commissioned this unique hybrid. The instrument was likely assembled between 1959 and 1962, probably on the earlier side and is the only guitar with this combination of elements we have ever seen.

At first we assumed this was a conversion from an existing Country Gentleman. Close examination revealed someone was able to procure an unfinished body from Brooklyn Gretsch factory, either directly or through a dealer, and had this guitar built from it. The holes for the controls and pickups were not drilled in typical Gretsch positions; these would have had to be plugged and re-drilled for the current layout which does not seem to be the case.

This handmade Moseley neck is typical of his period work. It is very slim and joins the body at the 17th fret, giving an extended range of fret access. There are 23 frets in total. This is the most important design alteration from Gretsch, and may have been the idea that sparked this custom build. The maple neck has very neatly done binding and inlay, the rosewood fingerboard is inset with tiny dots inlaid on the bass side. The carved headstock is ornamented with Moseley's trademark "M" at the crown, and the early "MosRite" logo. The back of the neck is made to look like it has a center laminate strip, but this is actually painted on!

In 1959 the Chet Atkins Country Gentleman was Gretsch's recently-introduced high-end signature model. The thin-rim 17" wide laminated flame maple body is 4-ply bound top and back. Unique elements are simulated F-holes topped with plastic inserts and heavy internal bracing. These were specified by Atkins, who wanted a more feedback resistant instrument. This concept likely appealed to the player who commissioned this custom job. Exactly how one obtained an unfinished Gretsch body we don't know, but someone managed it around 1959. The lacquer finish is Moseley's work, originally a very deep red sunburst overall which has faded on the face to a rich amber.

The pickups are neither a typical Gretsch or Mosrite fitting. The guitar may have had several different pickups earlier, as there are somewhat crudely done routs hidden under the pickguard. The current pickups are single coil units in cream molded plastic covers, surface mounted to the large back-painted clear plastic floating pickguard. They have individual magnet poles similar to Fender practice surrounded by slim flat coils halfway between a Stratocaster and Jazzmaster in size.

The wiring scheme is Gretsch-like with volume controls for each pickup and master volume on the lower cutaway. Instead of a tone switch there is a tone knob that works backwards. A pickup selector switch is mounted on the upper bout. The Phillips head screw securing the arm dates the Bigsby tailpiece to around 1959. It mounts a hand-made extended bar; the original would be too short with the bridge positioned up the guitar's face. The metal bar bridge on a wooden base is similar to period Gretsch practice.

The milled metal knobs look like they came off an old Hi-Fi set; other unique touches include hand made oversize milled aluminum strap buttons, a textured gold metal truss rod cover and unusually large rosewood nut. In an odd mix of high-end and low-rent the gold-plated Kluson Deluxe tuners are mounted with inelegant unplated flat-head screws.

A 1950's Country Gentleman a rare guitar in itself; this handmade Semie Moseley creation is another level, almost certainly a one-of-a-kind creation. It is a true California hillbilly hot rod guitar with Brooklyn roots, a great piece of fretted history and a cool playing and sounding instrument by any standard. We don't know who originally ordered it, but the guitar has some documented history. It was in Randy Bachman's extensive Gretsch collection, later the property of the Fred Gretsch company; some pieces of which were recently sold.

This one-of-a-kind guitar has some general wear overall, but nothing too serious. The finish shows checking and small dings and chips some of which have been touched up with varying levels of success. The originally deep red top color has faded dramatically to a sweeter amber hue; the original color is better preserved on the back, and still visible under the tailpiece and pickguard on the face.

The guitar was refretted some time back; the fret wire though still fairly small is larger and more functional than the tiny flat frets Moseley typically used. Semie Moseley's early instruments are sometimes not the most player-friendly creations by modern standards; the workmanship on this guitar is very good and if not perfect by modern standards it is still a good playing and very cool sounding instrument. With its Brooklyn-made chassis and California trim this is a real hybrid hot rod, a unique combination of elements and a fabulous if obscure piece of fretted history. Overall Excellent - Condition.
×