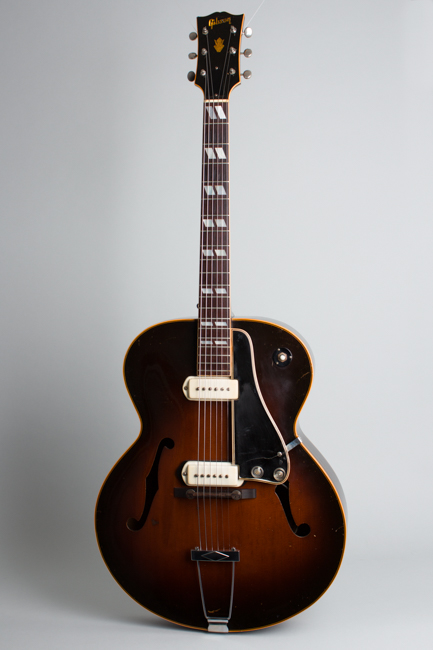 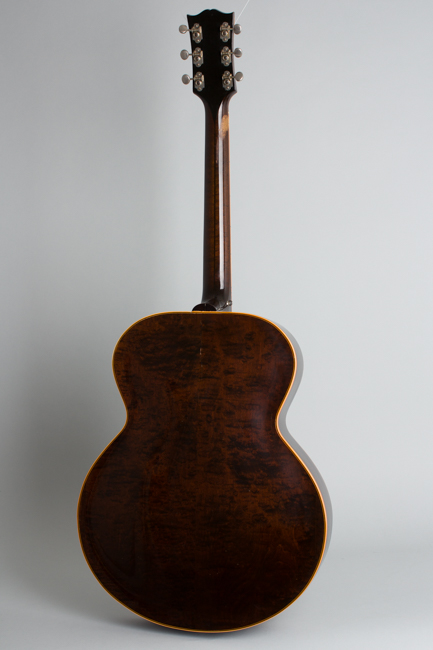 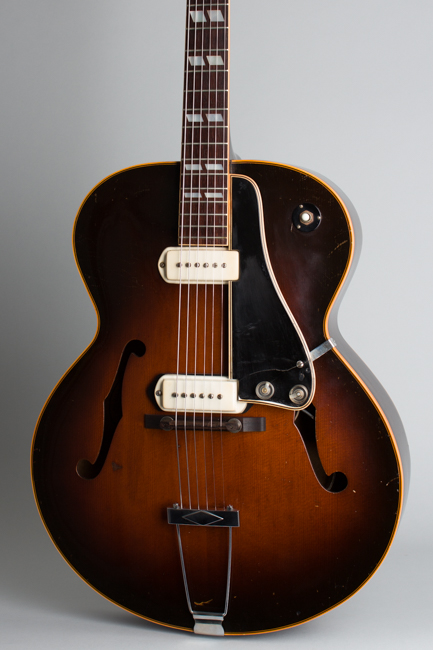 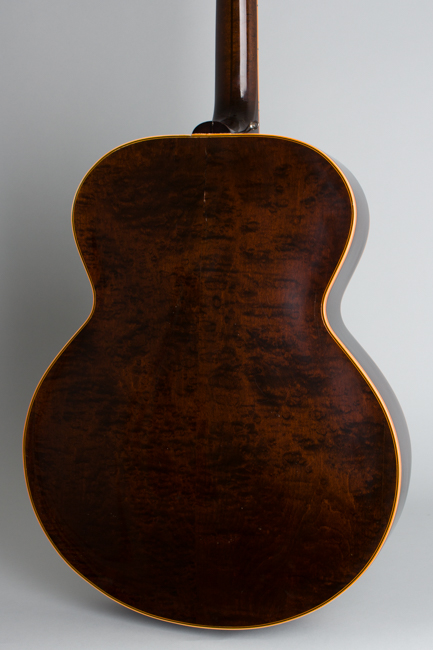 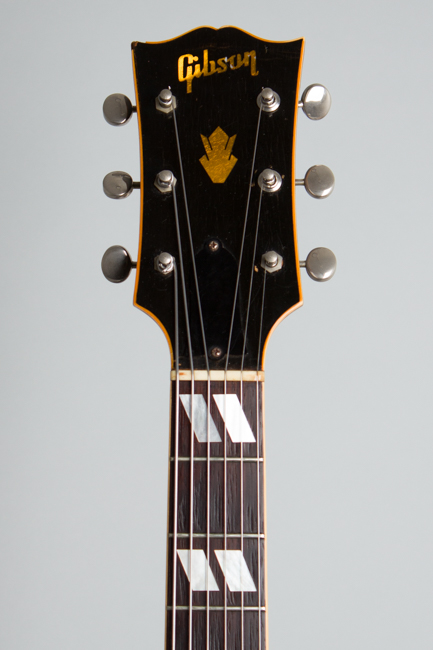 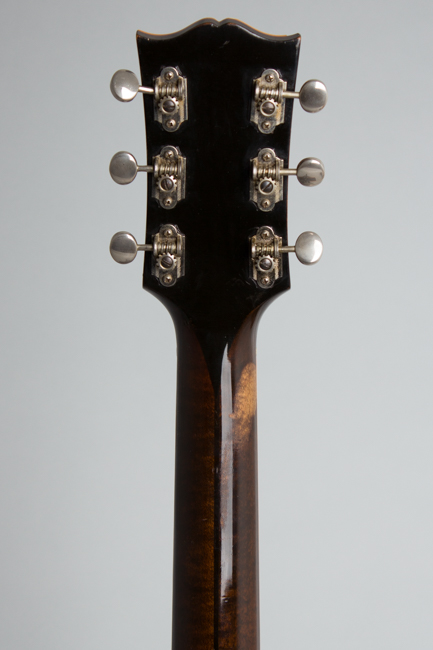 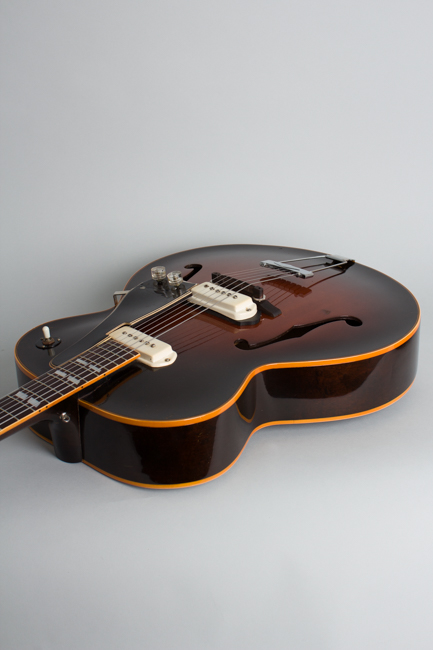 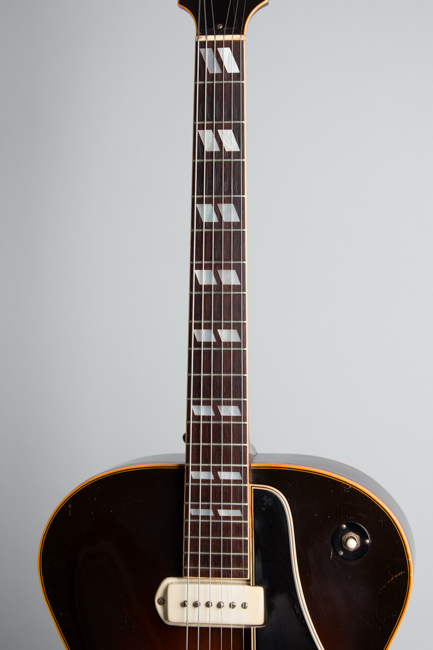 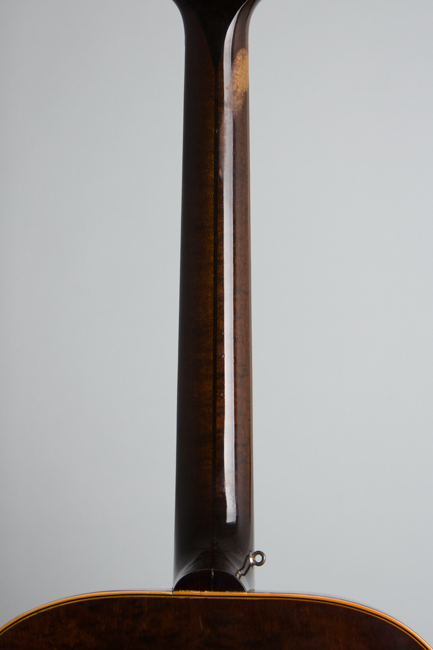 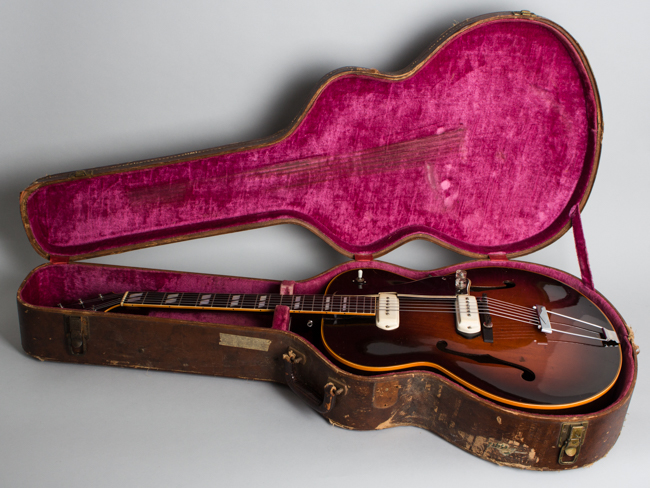 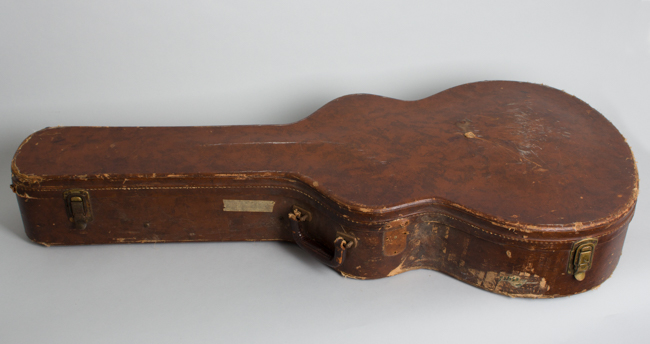 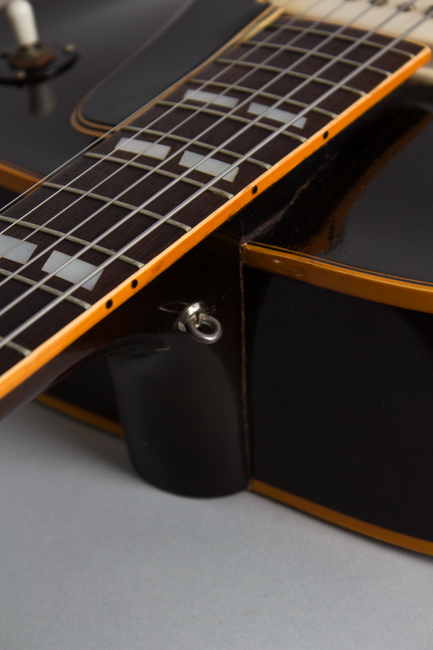 This 1950 Gibson L-7 looks to have had a long and fruitful musical life but is far from original condition, having been converted to an electric guitar fairly early in life. It was shipped from Gibson in January 1950 as an acoustic instrument, and probably several years later had pickups and wiring added for a complete electrification. This was not uncommon in the 1950's, as many players did not want to shell out for a new electric guitar when it was cheaper to just "upgrade" an instrument they already had!

The L-7 was Gibson's lowest priced pro-grade 17" archtop guitar, a staple of the company's line for many years. Features specific to this era include the headstock logo (the first post-war block Gibson script with the joined dot and the tuners) and large base plate Kluson individual units with open gears and plastic "keystone" buttons. The top and back are triple bound and the neck and headstock are single bound. The C-profile neck is fairly chunky feeling but noticeably thinner back-to-front than many earlier Gibsons. The rosewood fingerboard features the double parallelogram inlay that became a post-war Gibson trademark.

The twin white plastic-covered pickups and switch are most likely from an early Guild electric, or perhaps directly from the Fransch electronics factory in woodside NY that was Guild's supplier. It is important to note that these are surface-mounted units; neither the carved top nor the bracing have been cut through to accommodate the electrification. There are small holes in the top for the switch, pickup wires and mounting screws and that's it. The guitar actually retains quite a good acoustic sound with plenty of volume, and a nice sweet electric sound as well.

The openback Waverly tuners are period but not original to the guitar, the tailpiece and bridge are modern versions of the typical Gibson fittings. The pickguard is original, with what looks like a long repaired crack and small tone and volume pots with clear knobs mounted to the back end. The pickup is wired to an endpin jack so there is no hole drilled in the side.

This 70-year-old L-7 is no longer "collectible" perhaps but is a cool hybrid instrument in many ways typical of the early 1950's electric guitar period. It is a wonderful player with quite a versatile tone, with enough acoustic sound to push into swing rhythm territory and a good electrified sound most comparable to a period Guild archtop.

This guitar is well used but remains still fairly clean overall. The finish shows checking, dings, dents and scrapes overall but the only really notable wear spot through the lacquer to the wood is on the back of the neck in the first position. There are a couple of deeper scrapes to the top. The patina is quite dark overall with heavily ambered binding; the guitar must have spent a lot of time at smoky bars and/or clubs back in the day! It does not retain a smoky odor today, though.

The neck appears to have been reset and there is topical overspray to the heel and sides adjacent, but the rest of the finish appears original with some small touched up areas. There is a small solid crack repair to the side off the treble side of the heel, and a small portion of the back center seam has been resealed. The guitar has no other cracks or visible repairs. A "D'Angelico strap button" (i.e. a dog-clip loop) has been added to the bass side of the heel.

The frets are original with some light wear and still play well. While perhaps a bit of a mongrel in the eyes of archtop purists this is a really fine-sounding guitar, both rich and incisive and an excellent player. While no longer in its original state this guitar is relative bargain in a carved-top instrument, with a cool vibe and great sonic personality. It includes a very battered and funky original brown Gibson hard case that is still solid although a couple of latches have gone missing Very Good + Condition.
×