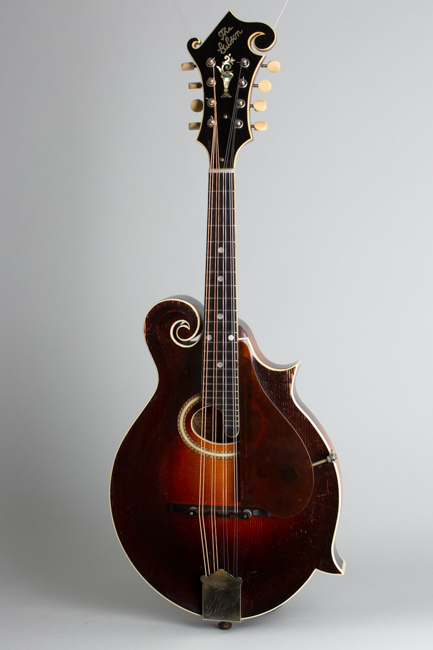 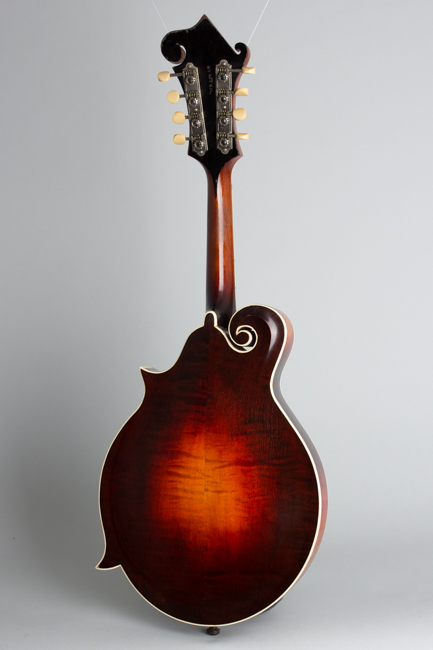 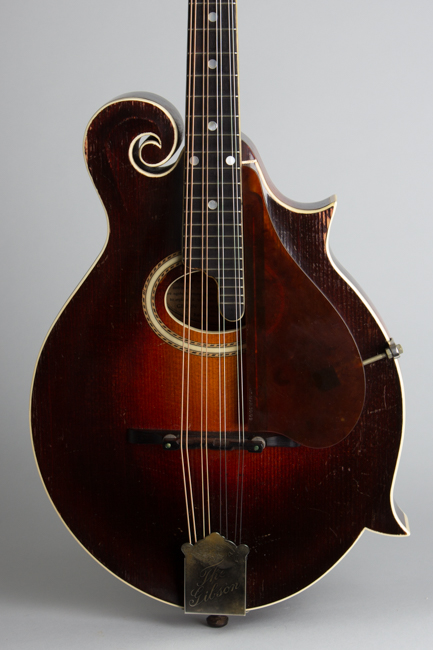 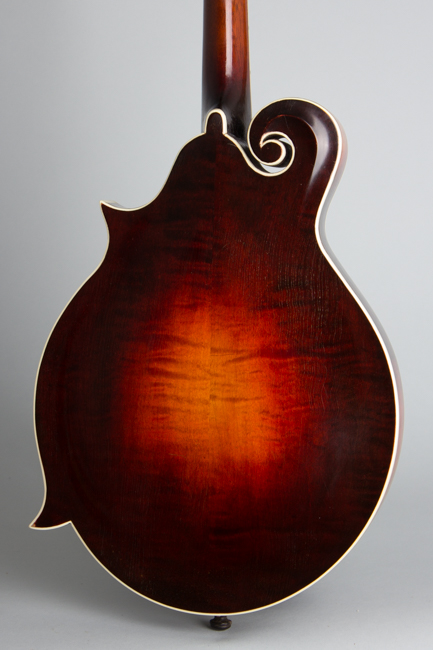 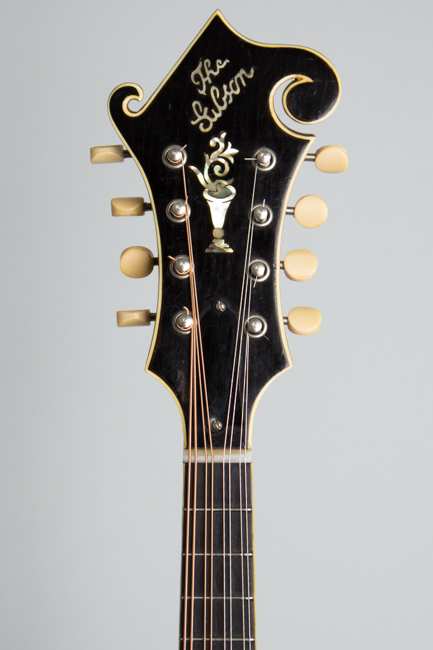 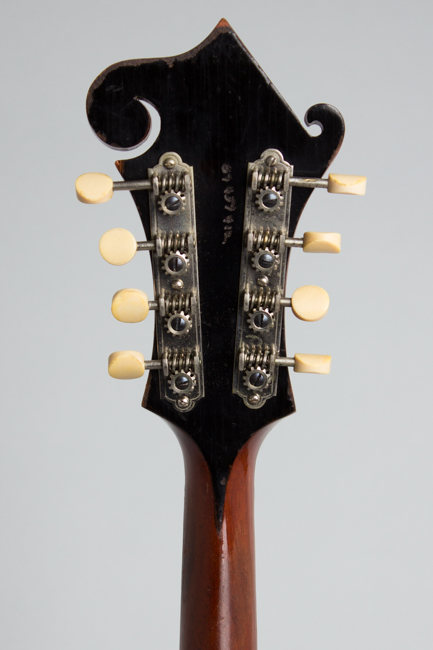 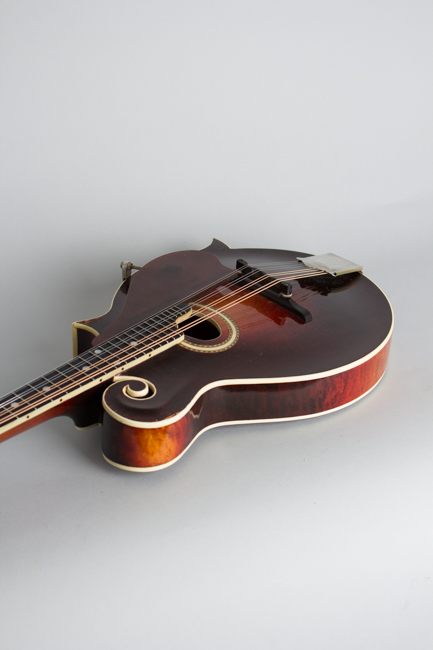 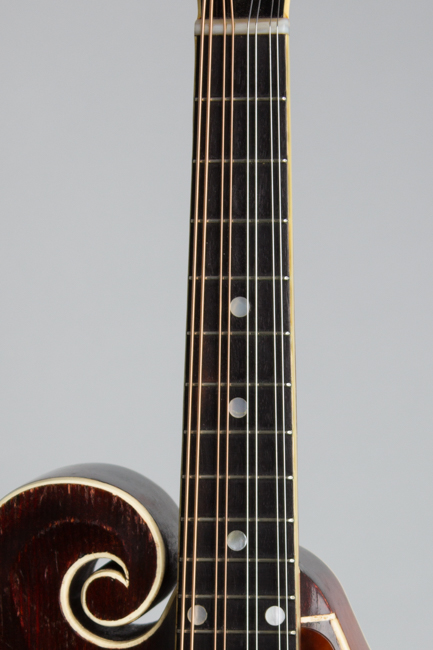 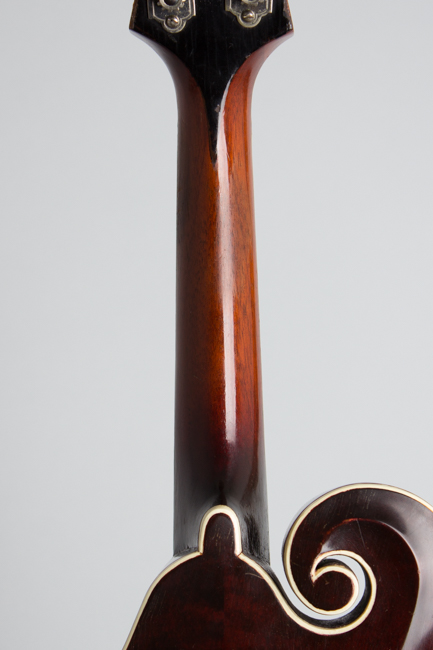 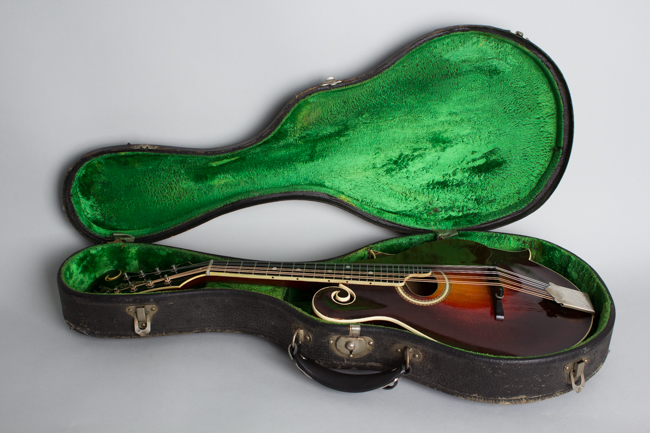 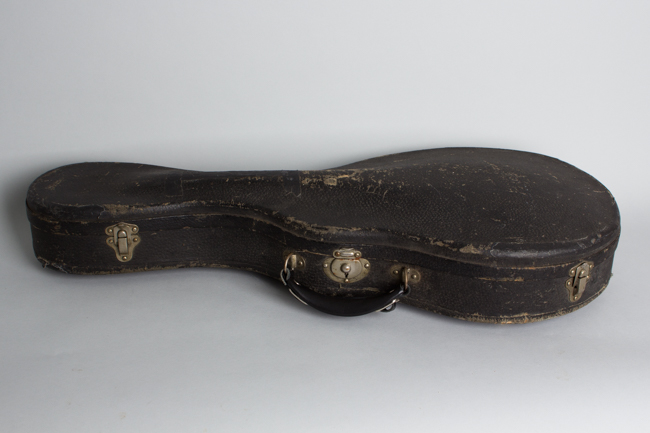 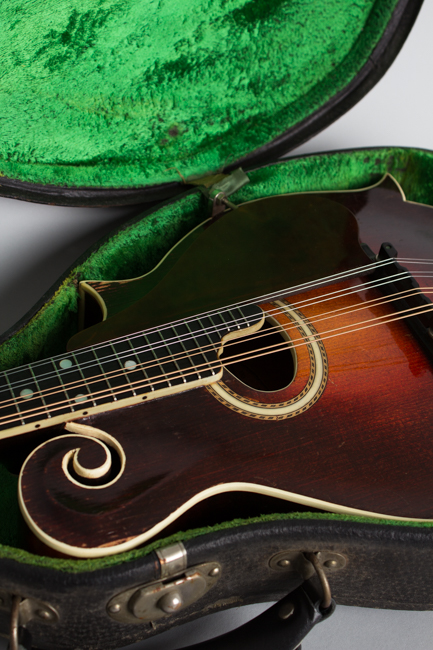 As Gibson mandolins go there are not many more hallowed instruments than a Style F-4 Artist model, especially those from the company's "Lloyd Loar" era. This mandolin was made just after that period -- modern scholarship dates it to 1927 -- and still includes all the improvements and details Loar helped develop at Gibson. It is a lovely example of Gibson's craftsmanship from a time that was just ending, as interest in the mandolin waned and players turned to banjos and then guitars.

This example is practically identical to the Loar era instruments, and maintains the unmatched sound quality and perfected features including the adjustable truss rod, raised adjustable bridge and slimmer neck profile. The F-4 Artist's model had been Gibson's highest grade mandolin until the advent of the Master Model F-5 in 1922, and even after that model's introduction remained at a price of $150.00, one of the most expensive instruments of the time.

Lloyd Loar's tenure as "acoustic engineer" at Gibson has become so mythical that sometimes separating fact from fiction is difficult. Certainly the mandolin family instruments made during the period of Loar's employment are the most perfectly realized in Gibson's history, and have become the template for most similar instruments since. The mandolins of the "Loar Era" show the influence of a master player on both design and execution, although other Gibson employees (especially Thaddeus McHugh and Lewis A. Williams) actually engineered many of the technical improvements. Loar was primarily concerned with 'voicing' the instruments properly; the Master Model Style 5 line was his greatest contribution with their violin-style F-hole tops but all Gibson mandolin family instruments were refined and improved at the same time.

This F-4 features a two-piece bookmatched back and sides of beautifully flamed maple; despite Gibson's catalog descriptions, only the Style 4 instruments were actually built with the specified maple body. Top, back, sides and neck feature a beautiful dark, rich red sunburst finish and are bound in grained ivoroid. The headstock carries flowerpot inlay, a Gibson pearl logo mounted at a less acute angle than earlier examples and Waverly strip tuners with grained ivoroid buttons.

The pickguard is the usual elevated tortoise celluloid piece, with the 1920's metal bracket. The previously top-of-the-line F-4 may have been overshadowed somewhat by the Master Model F-5, but the examples from this decade are still the finest ever built and often spectacular sounding mandolins. The tone is somewhat mellower than Gibson's f-hole instruments, but with plenty of body and "bite" when needed.

The factory order number 8564 stamped on the heelblock indicates this mandolin was assembled early in 1927, while the serial number suggests it was shipped out around the middle of the year. Master Lloyd had "left the building" a couple of years before, but this F-4 is still built to the same specs as those under his watch. The late-20's-the "jazz era" was in, and mandolin sales were rapidly declining to nil. Fewer batches of F-4's were built as the company turned mostly to banjo and then guitar production. This F-4 is a fine example of Gibson's best traditional mandolin work, from the very end of that period. It remains in played but original condition, a lovely reminder of the company's first great period.

This is a wonderful sounding mandolin that has seen some playtime over the last 95 years but remains in excellent original condition. There is some minor finish wear overall, most notably some varnish is worn down to the wood on the back of the neck in the lower positions. The back of the headstock has a small chip off one of the points by the upper A string tuner, and an old social security number scratched into the center.

All hardware is original and complete, there is some plating loss to the top edge of the tailpiece cover. The original frets show some wear but the mandolin still plays extremely well with a rich ringing tone. A great example of the just-post Loar F-4, complete with a well-used but still solid OHSC. Excellent - Condition.
×