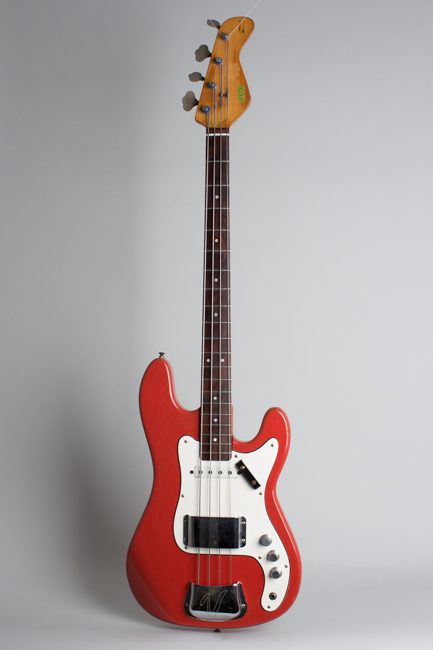 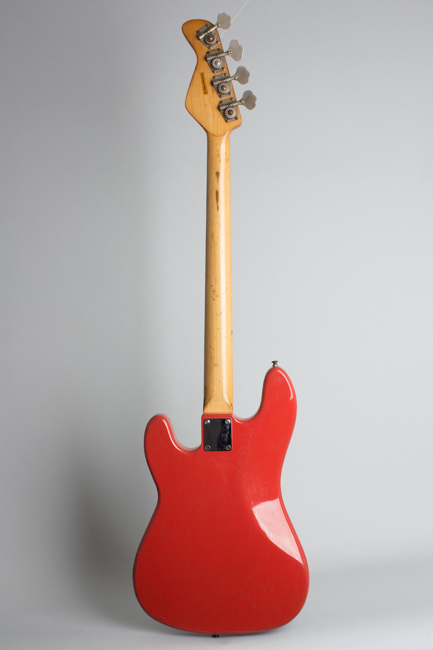 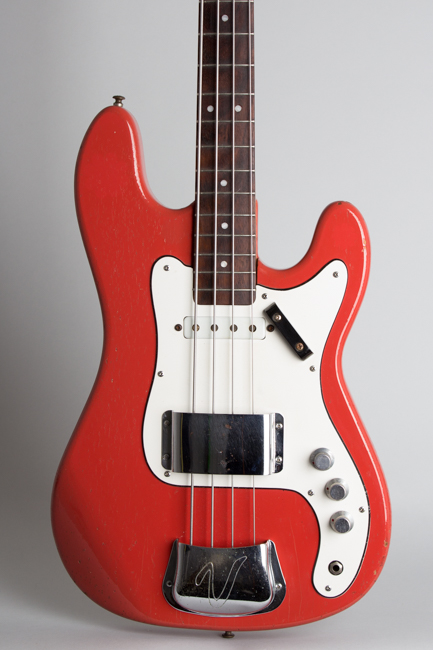 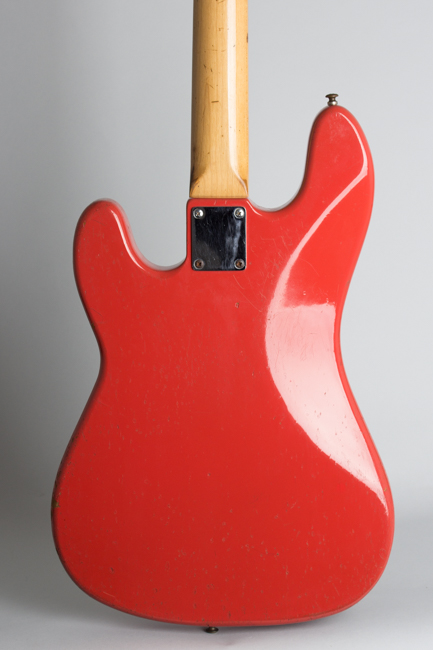 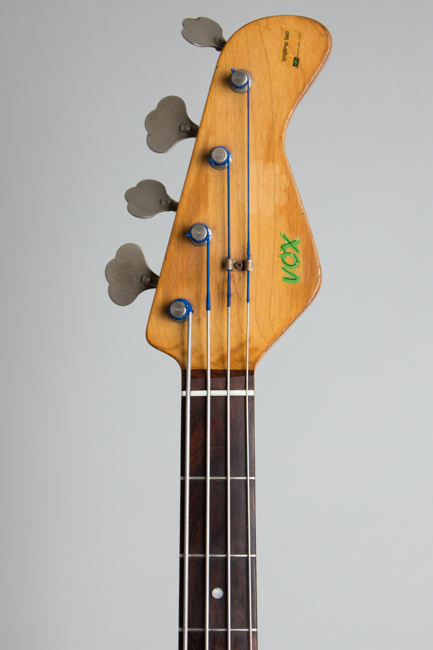 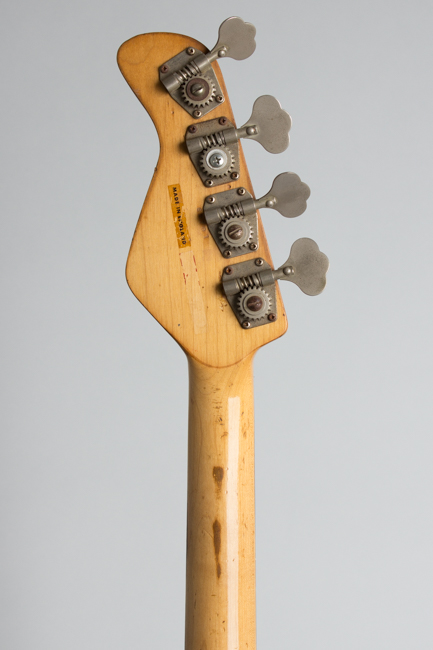 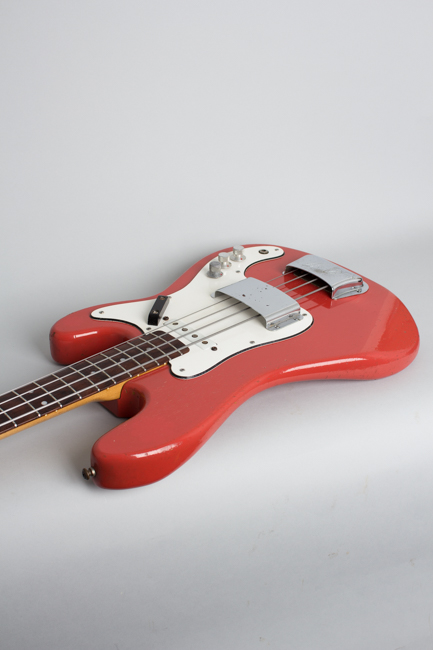 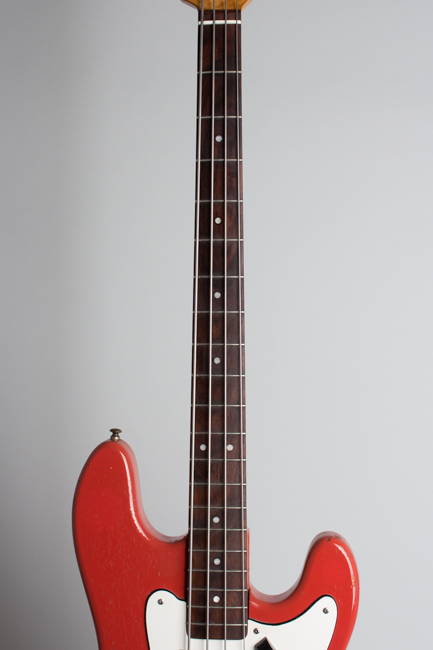 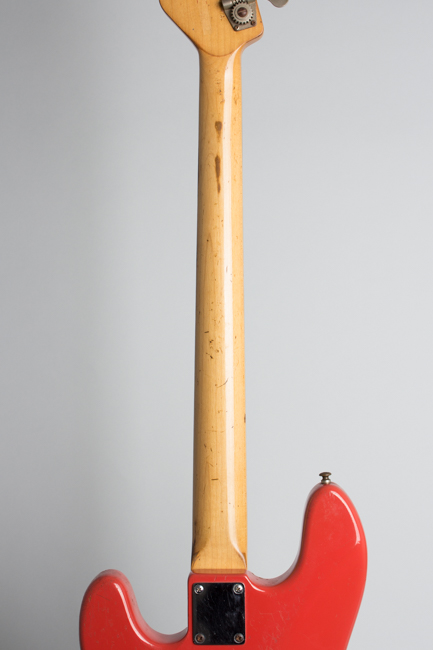 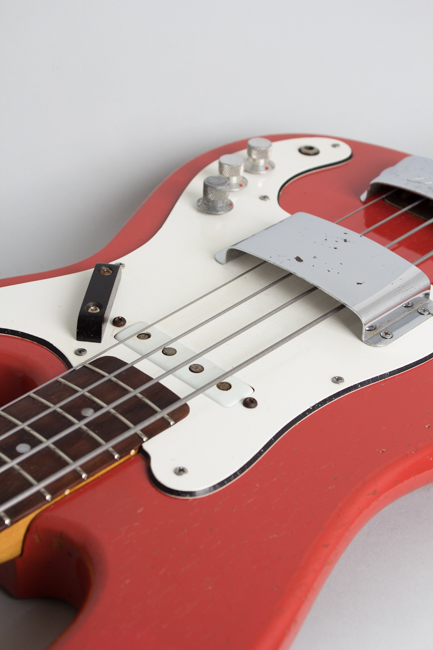 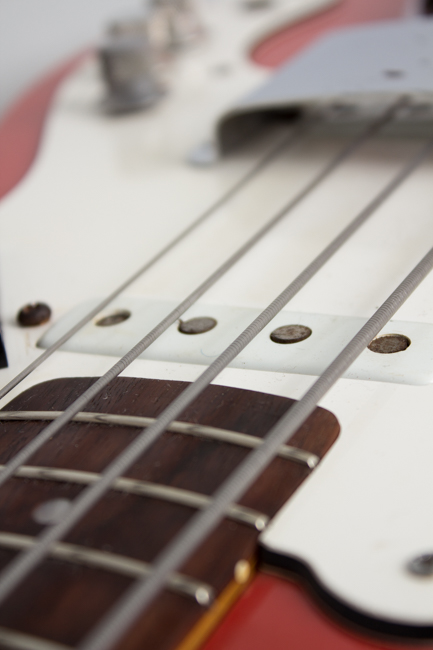 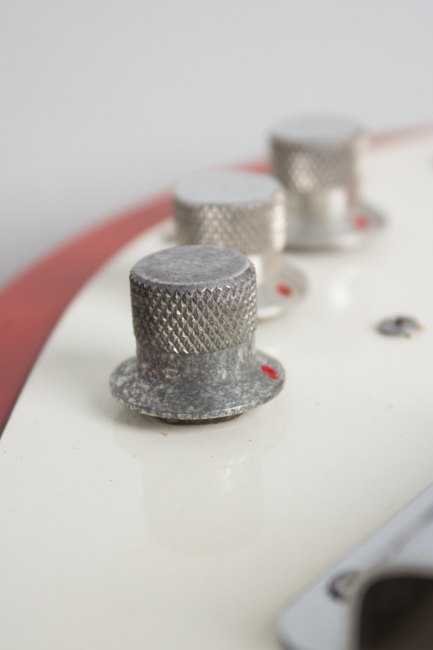 This UK-made Vox Symphonic Bass is one of JMI's rarer creations, taking pretty obvious inspiration from Fender but putting their own twist on it. Around 1963 not long after the Phantom bass another long-scale "professional" 4-string was introduced, dubbed for no obvious reason the Symphonic Bass. Like the Soundcaster guitar this was a close but curiously warped Fender copy, both body and neck having an almost-but-not-quite Precision profile. Unlike its direct inspiration the long-scale Symphonic Bass has two pickups, one in middle position under a chrome handrest and the second up by the fingerboard. This is the instruments most interesting feature, giving it a range of sound unlike any Fender bass.

The electronics are similar to a Jazz bass, with twin volumes and a single tone control allowing free blending of the pickups. Variations exist with both chrome-covered V1 and 4-pole V2 pickups. This example has the later V2 models that are basically inadvertent copies of the original 1951 Fender Precision pickup; a Strat-sized coil with 4 magnet poles under white Vox covers. The body finish is a very nice rendition of the Fiesta Red beloved on Fenders in the UK; the early Vox poly finish is far sturdier than Fender lacquer and on this bass the color has survived better than most actual Fenders would have!

The clear lacquer-finished neck is a bit thinner than a 1965 Precision with a 1 11/16" nut, neatly splitting the difference between Fender's P and Jazz basses. It has a slightly more "V" profile than a '60s Fender but is quite comfortable to play. The tuners on the droopy headstock are either UK-made very close Kluson copies, or actual Klusons. The rest of the hardware maintains that almost-Fender look with the similar pickguard shape, chrome covers and finger rest.

Priced slightly higher than the Phantom at 94 Pounds the Symphonic Bass was still less expensive in the UK than an actual Fender. This model is quite rare although cataloged from 1962-67, and hardly any were imported to the US. It was briefly listed here as the "Spitfire Bass" in 1965, but none marked as such have turned up. This is a later example made in late 1965; the neck heel is stamped Nov 1965 as is the body. It has seen some use and wear and reportedly spent most of its life in Malaysia! Many UK-made guitars ended up in the far east in the 1960's, and they can often be seen in old photographs of the interesting Asian Psychedelic bands of the period.

An early sunburst Symphonic Bass saw extensive use by Rick Huxley of the Dave Clark Five, who also played Fender basses. He can be spotted with his Vox up through 1968, so he seems to have been fond of this JMI half-breed! The Symphonic Bass was otherwise rarely seen with "star" players, and the blatant copying of Fender was in retrospect perhaps a stylistic embarrassment for Jmi. Jennings likely felt their high-end but less expensive Fender clones would woo players away from the real thing, but most seem to have ignored them. In retrospect it was the more original Vox designs that served them better, but from a player's point of view this is both the most ergonomic and arguably best sounding of all Vox basses. This is a nice example, worn but a fine player and an exceptionally rare find in the US.

This bass shows a decent amount of wear overall but is an excellent player. It has been recently reconditioned with the fingerboard trued and a full vintage-style refret (virtually a necessity today on UK-made Voxes) and a new bone nut. Most of the screws have been replaced but all other hardware and electronics are original, with some corrosion to many of the metal parts. One tuner has a replaced center gear screw, the rest remain original.

The body finish has an odd pattern of fairly heavy checking, with many small almost circular marks likely the result of exposure to moisture in the tropics! It is however intact and original with some dings and chips to the edges but no major loss or flaking. The neck finish is thinner lacquer and has some staining and rubbed away areas, but the rather fragile decals on the headstock have somehow survived. The shadow of a flower sticker can still be seen on the headstock face, a ghost of the 1960's. While we can't claim the sound and feel of this bass will equal a genuine 1965 Fender, it is a very good playing and sounding instrument that comes surprisingly close with its own distinct character. Overall Very Good + Condition.
×