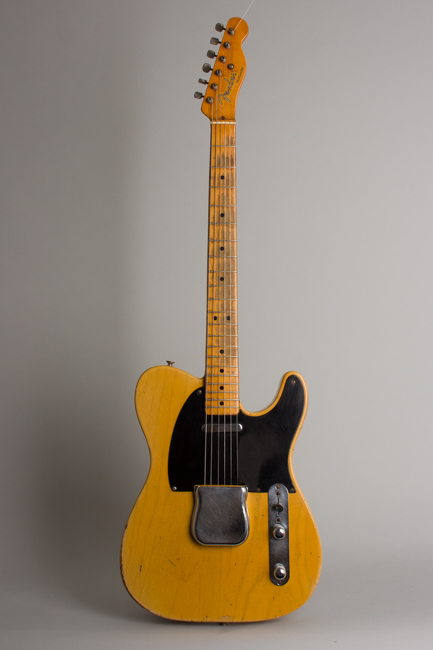 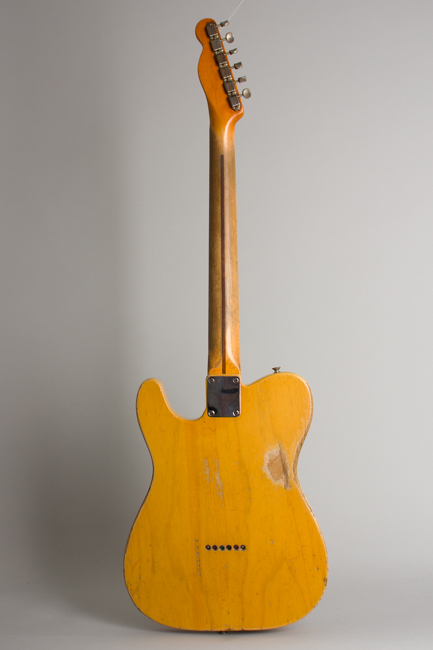 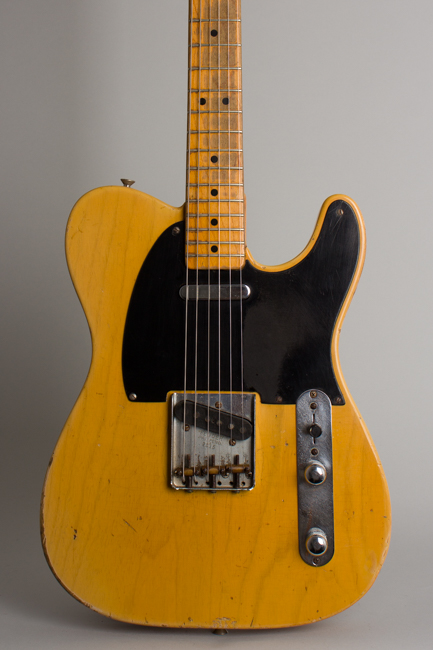 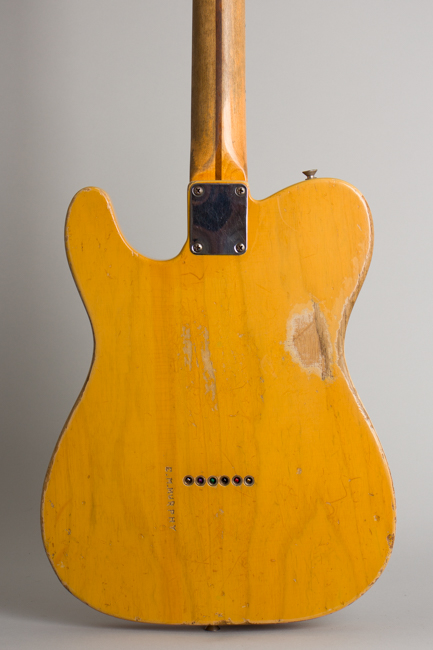 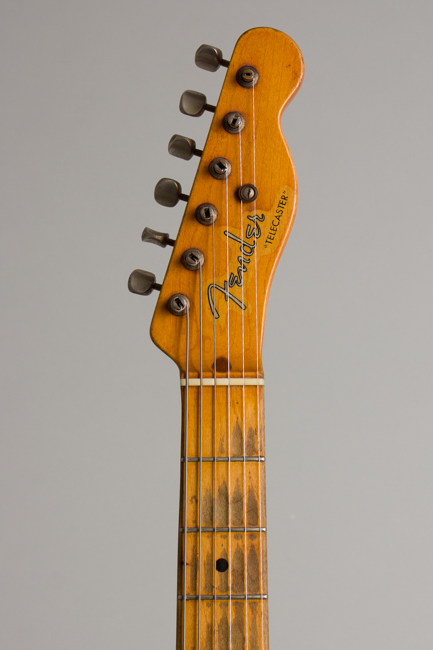 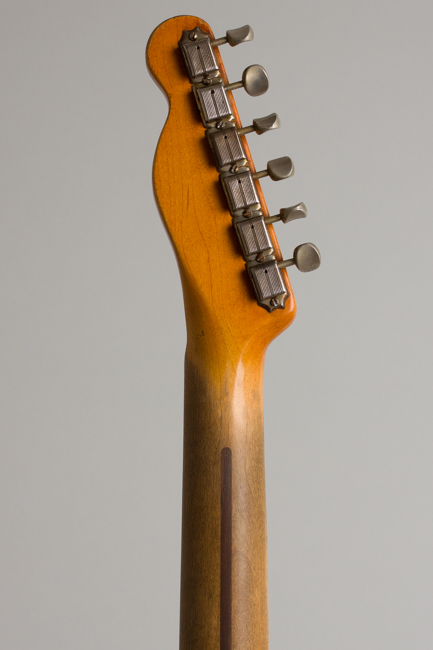 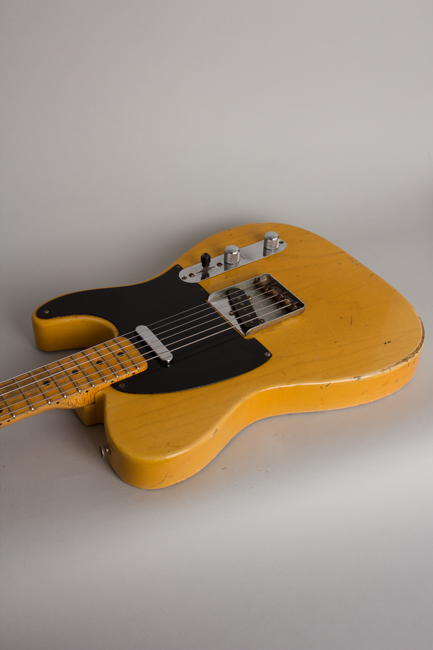 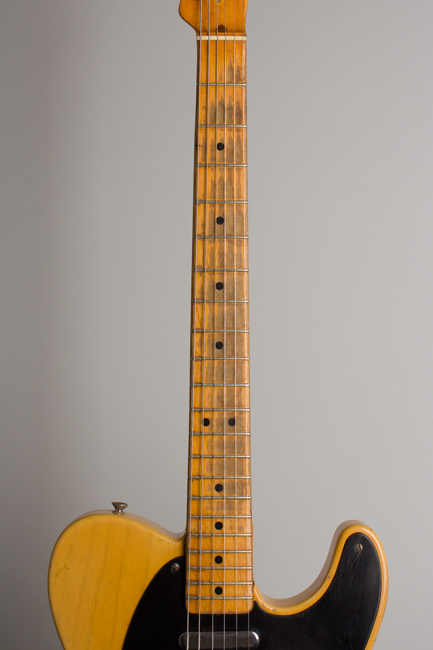 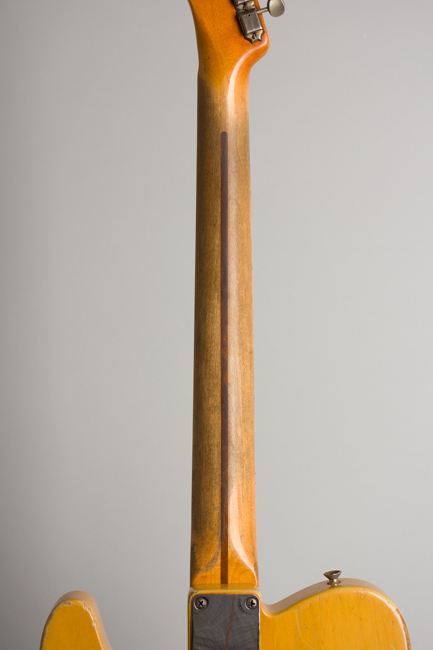 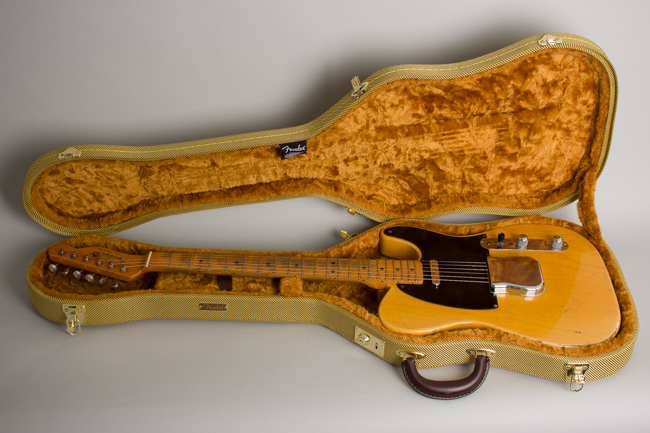 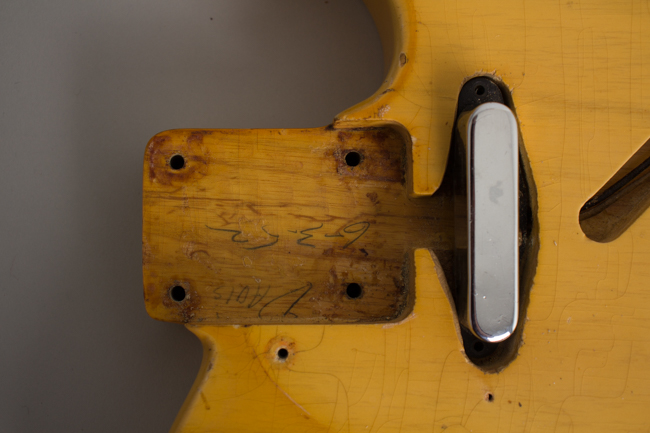 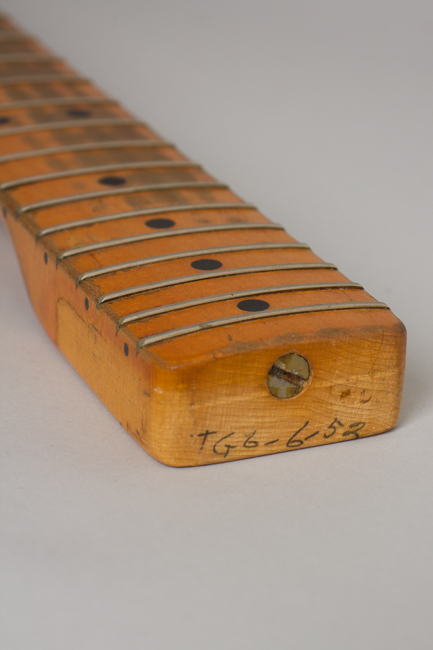 This is a great playing original example of a 1952 "Blackguard" Telecaster -- the guitar that put Leo Fender on the map -- built at the company's original cinder-block factory in Fullerton, California in mid-1952. It exhibits all the classic '52 Tele features: the one-piece maple neck, aged "butterscotch" blonde-finished ash body, lacquered black fiber pickguard, brass bridge saddles, and of course the original black-bobbin hand wound pickups. This one has seen some play time and minor work on the electronics over the last just about 70 years but has survived with its original character intact and a sound for the ages.

The serial number 2515 is stamped into the bridgeplate, the unit at the heart of the Blackguard Tele. The neck is marked 6-6-52 in pencil on the heel alongside the initials of Tadeo Gomez, who marked most Fender necks in this period. The body is marked 6-3-52 in the neck cavity, with the penciled "Davis" beside -- this is likely Eddie Davis, as his signature is found in many Tele and Precision Bass bodies from 1952 but usually written as "Eddie". Why he used his last name on this particular day in June we will never know! These parts are more closely dated than many early Fenders, showing perhaps some sped up production in the middle of the year.

This guitar has been played but not abused since it shipped out of Fullerton in late 1952. All parts remain original including the components of the early wiring rig; there has however been some work done in this area over the decades. The ink-stamped date codes on both original Clarostat pots are mostly soldered over; one appears to end in "14" (is it somewhat indistinct) and the other ends in 1"; both are the correct style for 1952, as are the switch and capacitors.

The guitar does have one oddball finagle related to the wiring that took a bit of head-scratching to figure out. There is a small amount of hand-done chiseling to front edge of the neck pickup cavity; after looking at this quizzically for a few minutes we realized someone had once turned the pickup around, with the coil flange facing forward instead of back. This was likely part of an attempt to re-wire the guitar to "modern" spec, allowing the pickups to be blended. As this was never intended on early Teles sometimes that results in a howlingly out-of-phase combination. We believe a previous owner attempted to re-wire the guitar, discovered the sound was not to their liking, and thought turning the pickup around would solve the problem. Fortunately the pickguard was not altered at all, and so this is all invisible from the outside.

The guitar is currently wired in the original configuration, with "deep bass" capacitor on the neck pickup in switch position #1; position #2 is the neck pickup in normal mode, and #3 is the bridge pickup with a master tone control. The pickups cannot be combined, the switch refuses to find the "in between" spot that some will tentatively select. The bridge pickup is completely original and unaltered down to the now-ossified rubber mounting grommets (and is rather microphonic at that) while the neck pickup appears to have been re-potted in wax long ago (probably as part of the attempted re-wiring done decades past).

The very comfortable neck has a nice "C" profile, slimmer with less of a rounded "throat" in the lower positions than some '52s we have had. It has been neatly refretted in the appropriate style wire. The screws are mixed flat and Phillips-head types as is customary for 1952. For many, this is THE classic Telecaster year, with the same look and feel as the earliest Fender Broadcaster and "No-Caster" guitars from 1950-51, but more consistent production standards. The fine details of the instrument continued to evolve as the decade went along, but '52 is the benchmark year Fender selected for basing its re-issues on. Early Fender Telecasters of this period are today among the most desired of all electric guitars. Many players and collectors have come to consider the 1952 Telecaster the finest electric guitar ever made -- and one of the most historically important as well.

In his authoritative and beautiful book "The Blackguard", Nacho Banos references this, calling '52s "a personal favorite" and stating, "The neck feel and lead pickup sounds from these ... make them some of the best Fenders ever made". While this guitar has seen some minor "reptile dentistry" over the years it is still a very fine example of this primal Fender, with mostly only internal scars to show for its possibly eventful life so far.

Overall this is a great-playing "Natural Relic" 1952 Blackguard, which of late are becoming very thin on the ground. It shows a decent amount of general wear and of course the internal work detailed above but retains its original character and sound. The thin lacquer finish on the body has checked and ambered to the classic "butterscotch" look. It shows typical dings, dents, scrapes and worn spots -- especially to the edges as usual on slab-sided Teles -- but no large areas of loss except one belt-buckle spot on the upper back. The face shows a number of old dings but has less play wear than many. The guitar once belonged to E.M. Murphy, who incised his name in small block letters on the back below the string ferrules.

The thin clear lacquer finish both on the back of the neck and the fingerboard shows considerable wear down to the wood along most of its length, again common on 1950s Telecasters. It has that perfect "played-in Fender" feel that modern relicers strive to recreate. It has been neatly refretted with the correct style wire just a bit taller then the original, but there does not appear to be any overspray to the neck or fingerboard accompanying this. The bone nut is newer as well; the tuners remain original with less wear and corrosion than we might have expected.

All hardware on the instrument remains original, showing some typical wear, The original black fiber pickguard shows a decent amount of scuffing to the top surface, it may have been polished quite a bit along the way. There is sone old paint residue on the back, so perhaps at one time it was painted and later cleaned off. The brass bridge saddles and their attendant springs and screws have typical corrosion and discoloration but nothing is rusted hard and all adjustment screws remain functional. The control plate and bridge cover have typical playing wear, the domed knobs are fairly clean.

Internally the pickups remain original; the bridge unit is unaltered, the neck pickup looks to have been wax potted sometime back. As noted above there appear to have been attempts to re-wire the guitar in the past; the components are original but some of the solder joints have been redone, probably more than once. As currently wired the two pickups can not be combined, and at least one previous owner put some effort into altering this that never paid off!

This instrument has had some adventures since it left Fullerton in 1952, but suffered less from years of hard gigging than many. These were unique instruments when new, often "played to death," and the majority of survivors have not only been heavily used but often modified and now subject to extensive restoration. Wherever this one has been, it escaped this fate and remains a largely original and truly fantastic-sounding guitar, with a powerful bridge pickup that twangs sweetly or raucous as required and a nice mellow neck position. The guitar is housed in a modern Fender shaped tweed hard case. Overall Very Good + Condition.
×