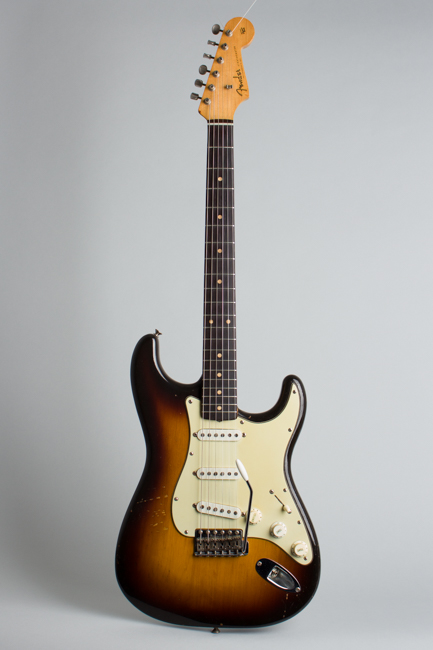 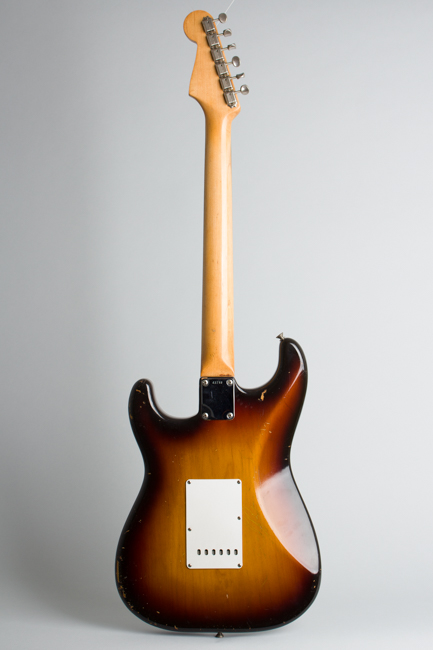 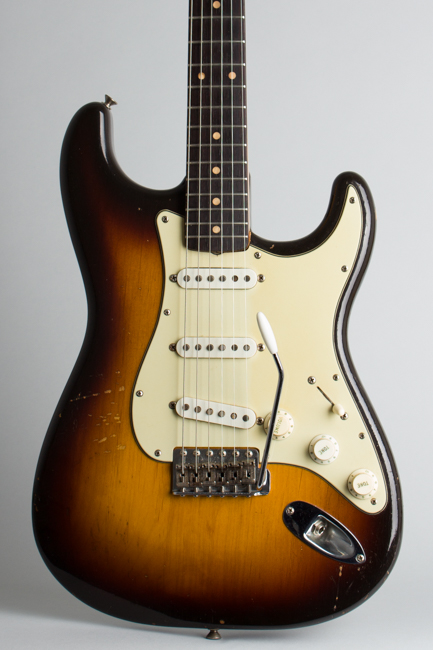 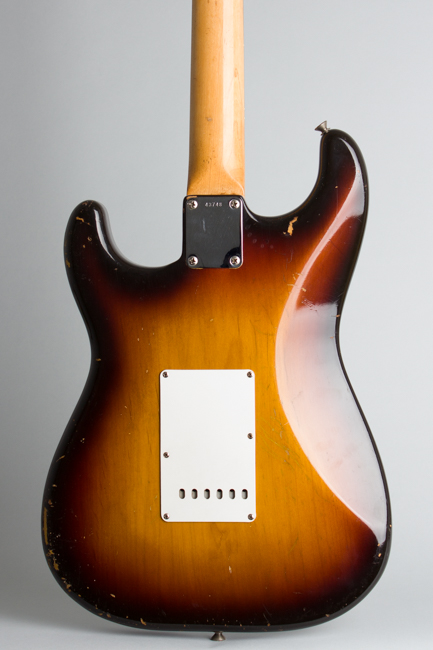 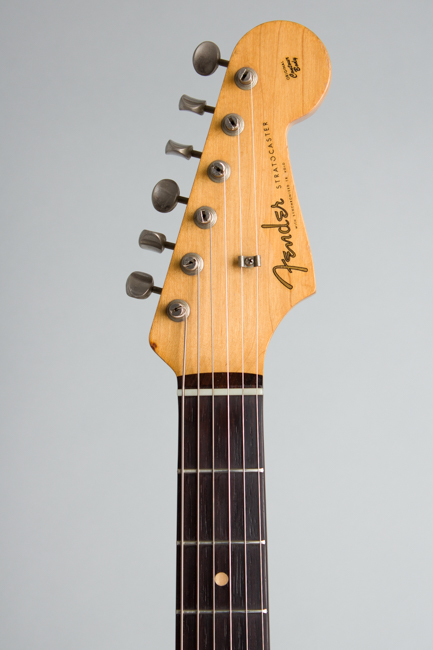 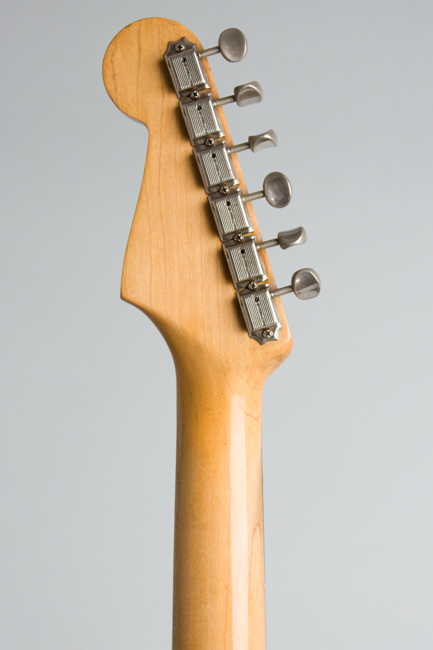 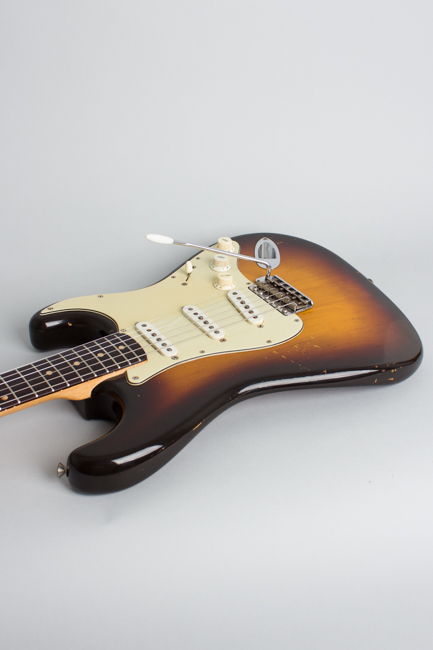 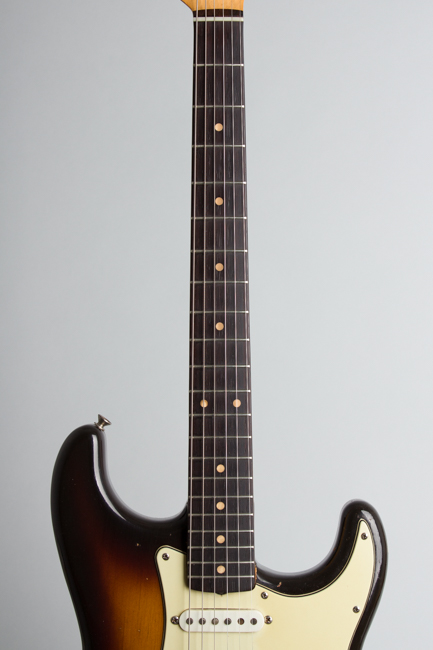 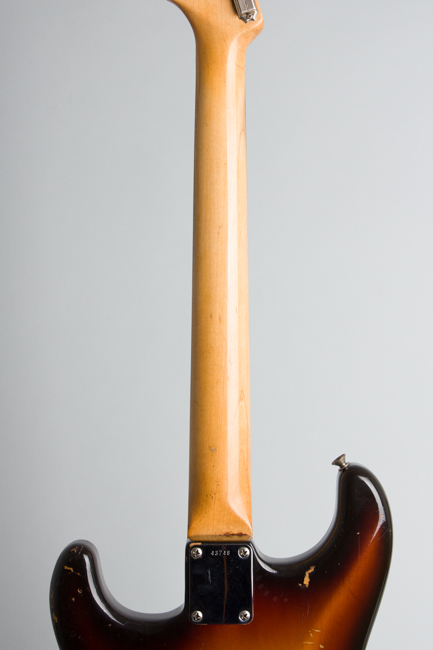 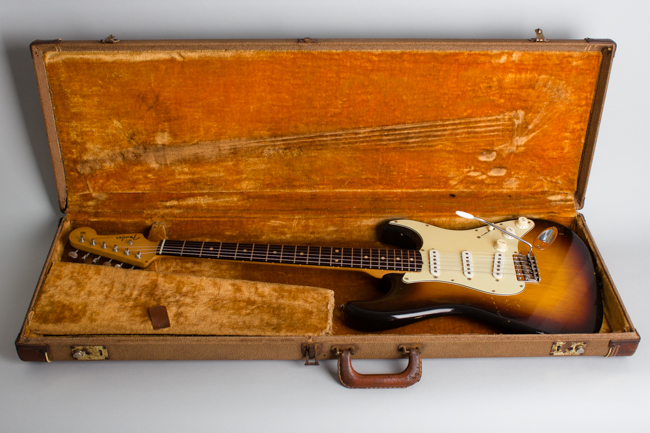 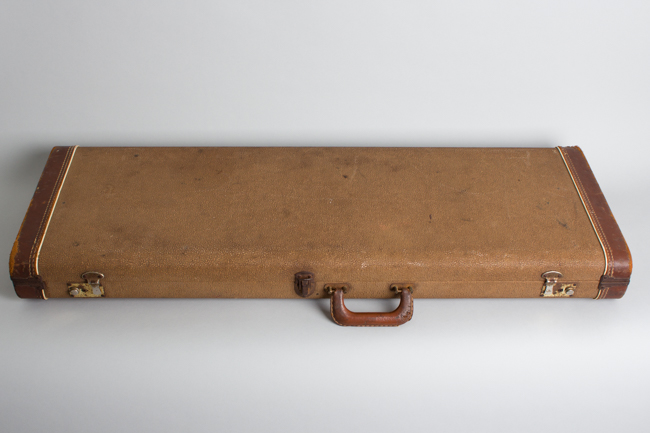 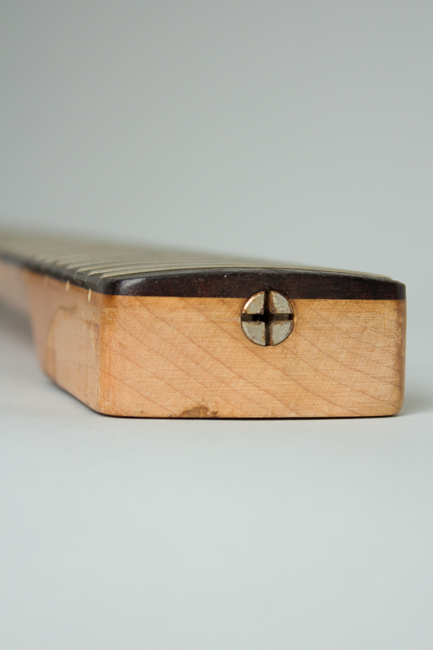 This is a lovely early slab-board Pre-CBS Fender Stratocaster, played in but all-original with a beautiful patina and vibe to spare. By late 1959 the Stratocaster was still a very popular model but had recently been supplanted by the Jazzmaster as Fender's top of the line offering. While many of the Surf'n'Twang players over the next few years would favor the Jazzmaster and its flashier sister the Jaguar, the Stratocaster remained distinctive with its 3-pickup layout and unique trem system, and the prime choice of many players in different genres. Surf Master/Originator Dick Dale always exclusively favored the Stratocaster, proclaiming he could not see why others would use anything else!

This guitar dates to the end of 1959, the first year of rosewood fingerboard Fenders. It shows typical period features, noticeably different in several ways from its 1950's maple-fingerboard ancestors. The fingerboard is the original thick rosewood version used starting in summer 1959, now referred to as a "slab board" to distinguish it from the much thinner laminates Fender substituted after mid-1962. It is inlaid with the "clay" dots that would also be phased out at the end of 1964. The neck carries the original smaller Pre-CBS style headstock with the older gold "Spaghetti" logo decal also replaced in 1964. While these are subtle changes they make a big difference to Strat afficionados, giving each period's instruments their own distinctive character.

The finish on the body is a fairly dark 3-color sunburst that has faded closer to a 2-tone look on the face. Both Fender and Gibson had problems finding a colorfast red hue at the time, with Stratocasters and Les Pauls now faded to many different looks! The pickguard is a beautiful example of the lovely greenish-hued nitrocellulose that replaced the single-layer white plastic in mid-'59. It is a superb example of this much-storied component with no cracks or splits and shows noticeably less shrinkage than most.

The neck carries no date marking, which is correct for most of 1959 and early 1960. The body is marked 10-59 in the trem cavity. The pots are a perfectly matched set dating to the 20th week of 1959 as well, with untouched original wiring. All three original single coil pickups have a strong well-defined tone, and the "in between" settings offer up a "Stratty" quack without sounding as glassy as many earlier or later models.

These early 1960s slab board Stratocasters have become a player's favorite over the last few decades, often offering up a meatier tone than either the earlier maple fingerboard guitars OR the later CBS period examples. The players' cult of Stevie Ray Vaughn is particularly focused on slab-board Strats, but they have a wide appeal to players in many styles. It is fairly rare nowadays to turn up one like this that was never repaired or modified in any way.

This fine example of prime Fender mojo is still housed in its original brown Tolex case, which shows some wear but remains solid and functional. The original trem arm and trem cavity cover are intact. This is simply a great-sounding very early slab-board Strat, a lovely example of what Fender's reputation and success were built on well before "things started a-changin" in Fullerton with the January 1965 sell-out to CBS.

Overall length is 38 15/16 in. (98.9 cm.), 12 3/4 in. (32.4 cm.) wide at lower bout, and 1 1/2 in. (3.8 cm.) in depth, measured at side of rim. Scale length is 25 1/2 in. (648 mm.). Width of nut is 1 5/8 in. (41 mm.).
This is a lovely original guitar, showing some general wear but still in excellent playing condition. The finish on the body has small scuffs, dings, dents, scrapes and chips overall. There is less belt buckle wear to the back than many, and the face is fairly clean overall with not much of the typical armwear on the upper body. The area just forward of that has some deep pick marks that seem to be the result of an overzealous plectrum attack decades ago, with some concurrent marks in the adjacent pickguard. There is no overspray or other finish tampering visible. As noted the original 3-tone sunburst has faded to an almost two-tone look on the face; the back has a more subtle fade but the red hue is not as prominent as later '60s finishes.

The back of the neck is quite well preserved, worn down to the wood only in smaller areas along the treble side edge and in the bass side lower positions. The original small frets show minor wear and some light recrowning, mostly in the lower positions but are still quite playable. The clay dots have a brighter look than some, not as darkened over time as with many more heavily played examples. There is a very small "classic' cigarette burn on the lower bass edge of the headstock; the original decal is almost perfectly preserved.

This guitar is *completely* original and unaltered internally with untouched solder joints and all original components. The "green" pickguard is one of the best preserved we have seen in a while with no popped-out ends or cracks and only slight pulling at the outer screws. The center knob has a SLIGHTLY different color patina from the other two; it is possible it is a just a few years later knob but it matches perfectly in every other way; it may simply be from a different factory batch. The black-bobbin pickups are all very strong and sound great in any combination. The bridge saddles and screws are not perfectly clean but have less corrosion than many.

While this guitar shows signs of some serious play, it remains far better preserved than many period Stratocasters, which were often heavily worn and then stripped, routed or otherwise modified through the 1960s, '70s and 80s. Someone played this guitar a decent amount, but left it as God and Leo intended down through the last 60+ years. As a "played but straight" Slab-board Strat this has been one of our more requested instruments, and we are thrilled to offer this super vibey example still residing in its original brown Tolex case. Overall Excellent - Condition.
×