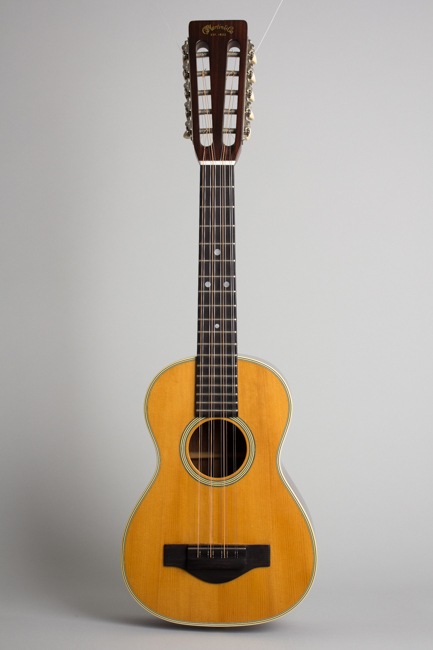 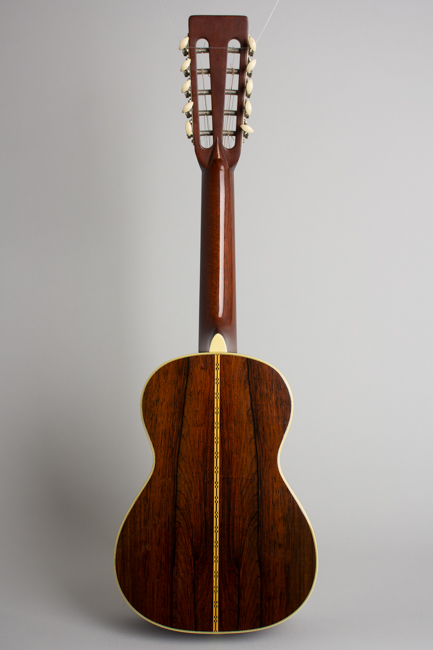 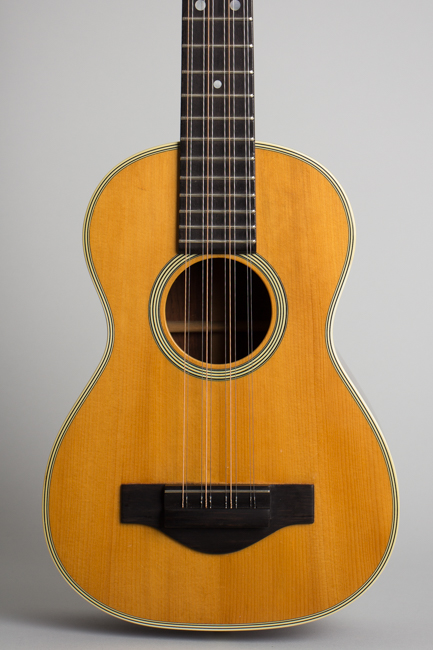 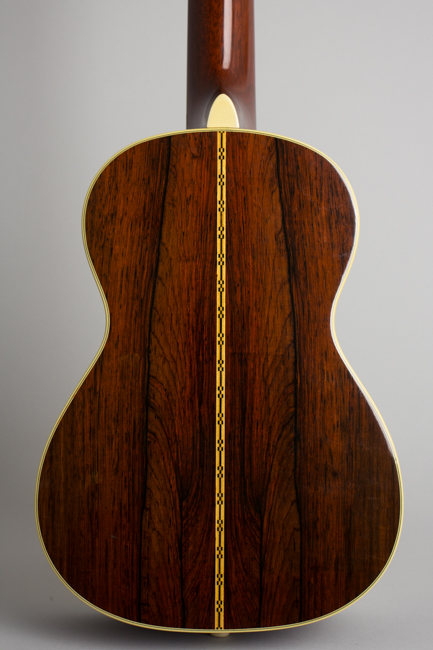 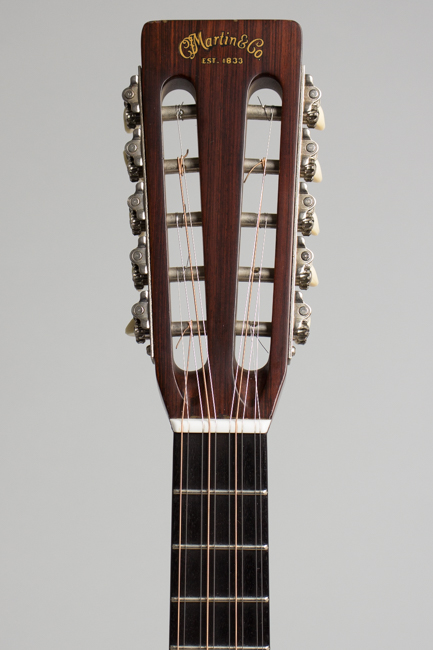 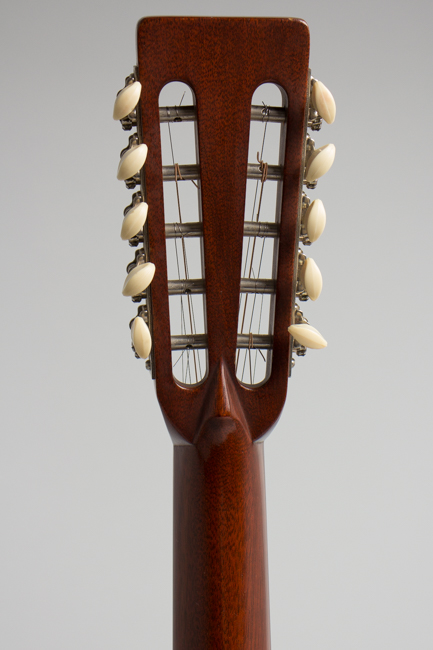 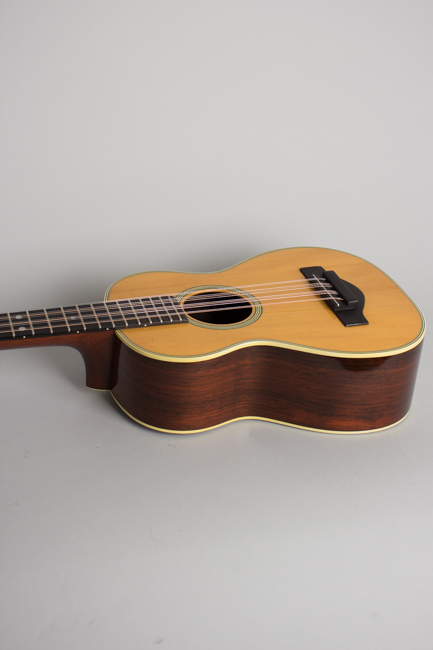 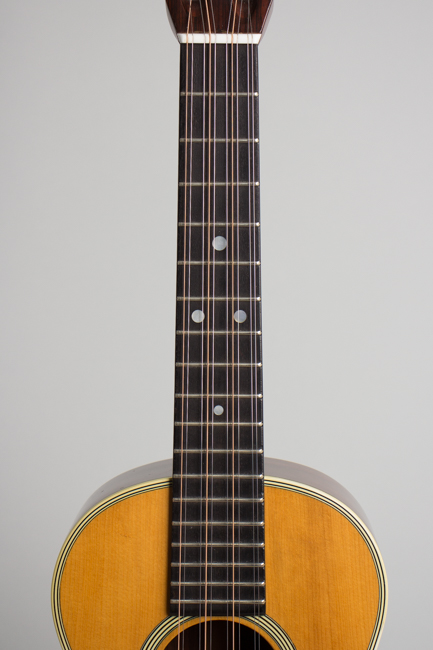 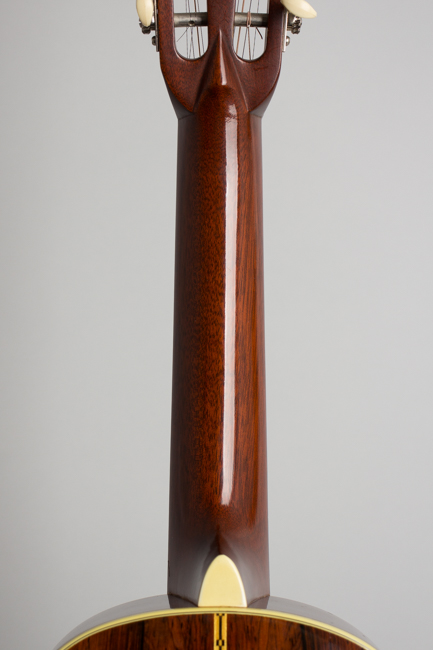 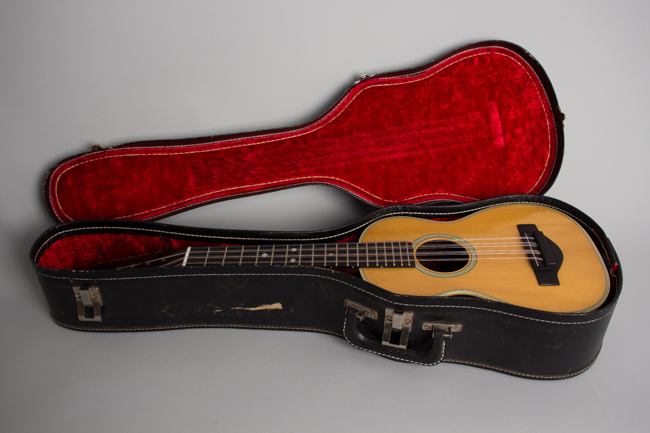 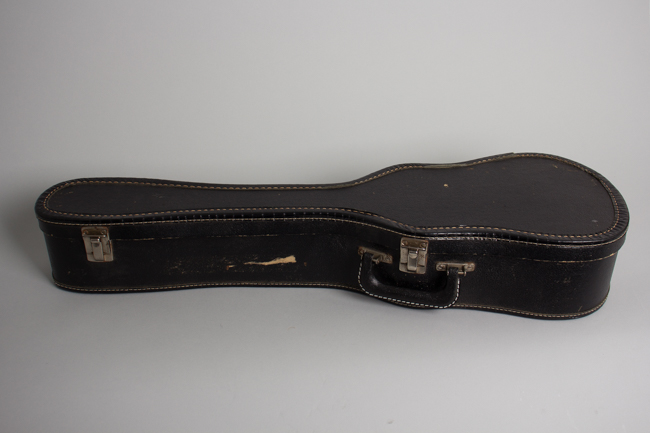 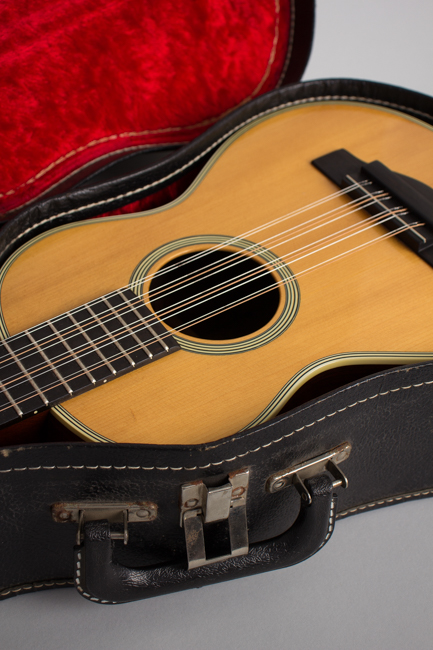 This is a nicely preserved and great playing 55 year old example of a rather rare instrument -- a Style T-28 Martin Tiple made of Brazilian rosewood. Martin's manufacture of "The Uke that went to College!" dates to the early 1920s, but amazingly enough Martin continued to offer them for nearly 70 years. Tiples were still a regular catalog item into the 1970s, albeit made only in miniscule numbers. The T-28 is the most deluxe model of the Martin 10-string family, with rosewood back and sides, spruce top and ebony fingerboard and bridge, built like a miniature Style 28 guitar. It was quite expensive at a $210 list price (plus case!) in 1967 so it's not surprising that only 12 were produced!

Martin Tiples were built around obsolete 19th century 1/4 size guitar patterns to create a steel-strung, ukulele-tuned instrument with a bigger, brighter sound. The two middle string courses are triple, with the outside sets doubled and all but the first pair in octaves. With its fairly short neck, large headstock, 10 steel strings and a diminutive guitarlike body this T-28 looks rather like a ukulele crossbred with a 12-string guitar. That's basically what it sounds like, as well, with a lovely round chime when picked daintily and a more raucous shimmer when strummed enthusiastically.

The back and sides on this T-28 are lovely fine grained Brazilian rosewood with a beautiful figure especially on the back. The X-braced top is lovely tight grained spruce. The mahogany neck has an ebony fingerboard inlaid with large varied-size pearl dots. The top is 5-ply bound in celluloid, the back 3-ply, and there is a chain backstrip and multi-ply celluloid sound hole ring to add to the fancy factor.

While the Tiple remains obscure in rock-oriented traditions, it has seen some skilled -- and even historically important -- players. Even if not well-remembered today, numerous small African-American string-swing ensembles of the 1930s made extensive use of these small, loud instruments for both fast lead work and frantic rhythm strumming. Two of the best known were the Spirits Of Rhythm (featuring guitarist Teddy Bunn) and Cats and the Fiddle, where Tiny Grimes got his professional start.

The T-28's greatest endorser was Timmie Rogers, a pioneering black comedian singer, dancer sometimes called the "Jackie Robinson of comedy". Rogers' upbeat but still sometimes surprisingly biting comedy is sadly obscure now, but he was well-known in his day and one of the first African-American comedians to receive wide exposure on TV. He was a multi-talented artist-singer, dancer, bandleader, and composer with a Martin T-28 as his steady companion for much of his career, a big part of his act.

No better examples of these now somewhat obscure instruments have ever been made; the T-28 can be called the unchallenged finest-grade Tiple of all time! Like all Martin Tiples it remains -- even if by default -- the world's standard. This is a very nice 55 year old example of that rare flagship model, a neat piece in every way.

This T-28 shows some light play and handling wear and simply appears not too much played, all original with no alterations. The finish has a some light check lines, scuffs and dings mostly around the bridge. The top has some very light pick wear near the fingerboard. The original frets have just some light wear in the lower positions. The original ebony bridge has a neatly repaired crack through the base which is unfortunately par for the course on Tiples, but is completely solid. The instrument has a very good neck angle and plays perfectly with a ringing but still sweet sound. The original heavy chipboard case has some light external wear but is also very nicely preserved. This is just about as nice a Tiple as we have ever seen, from any maker or time period. Excellent + Condition.
×