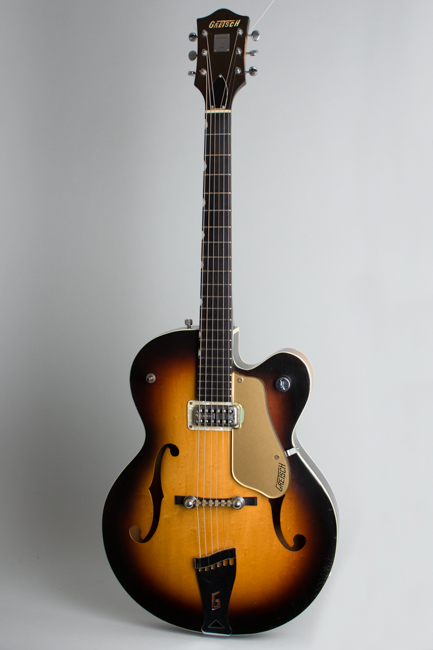 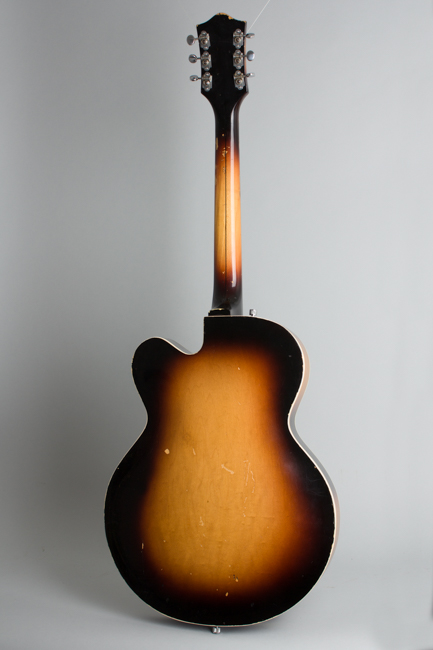 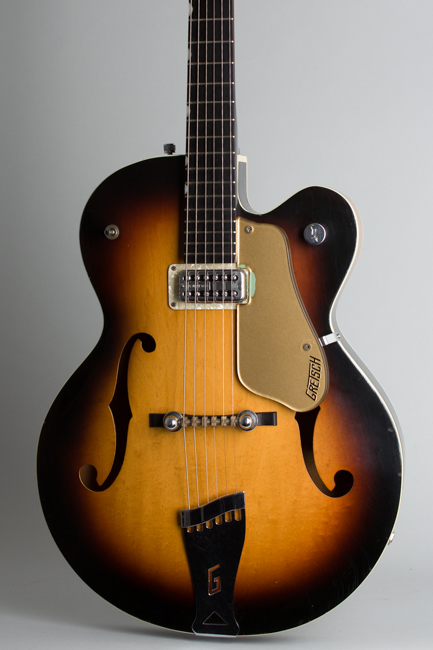 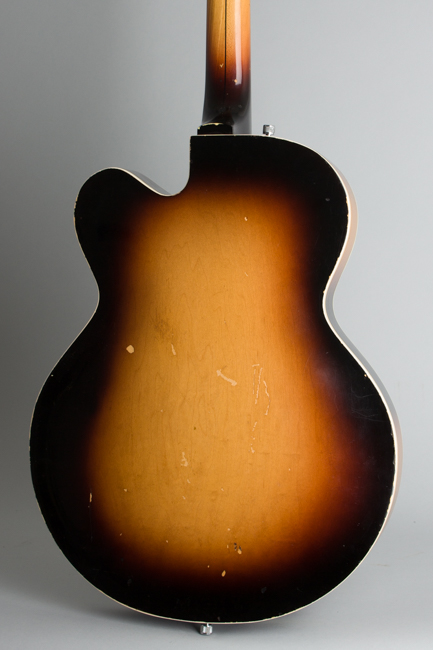 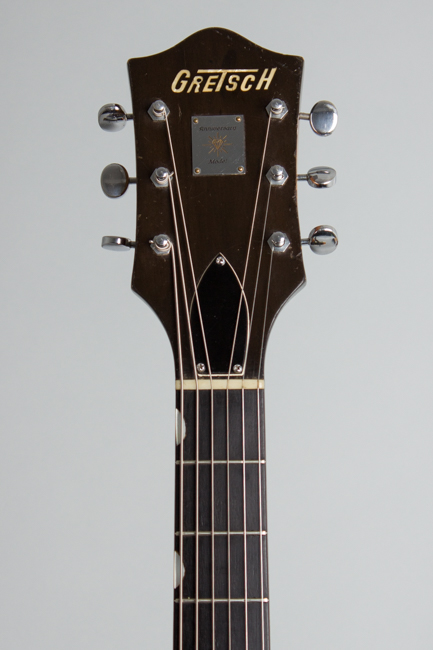 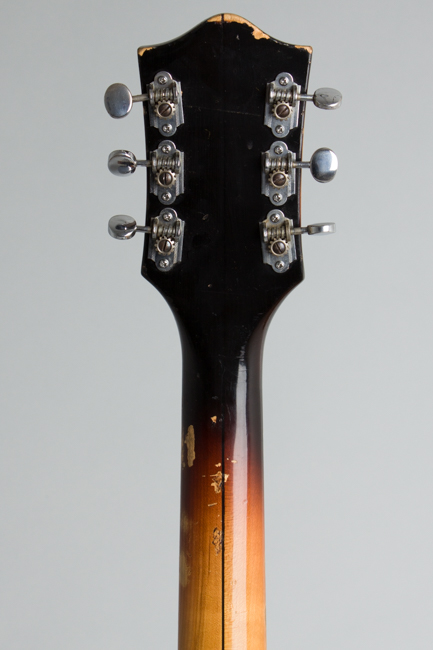 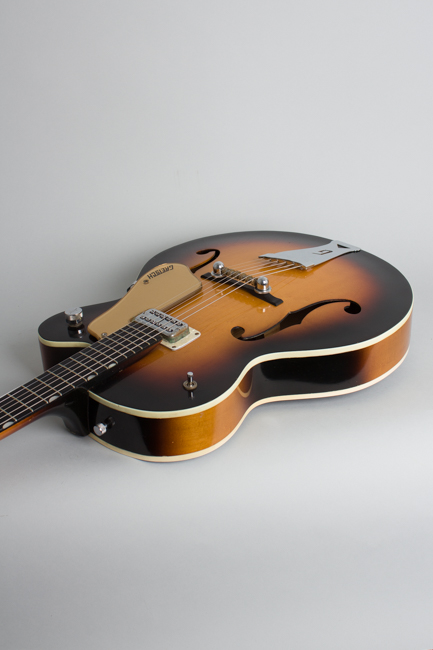 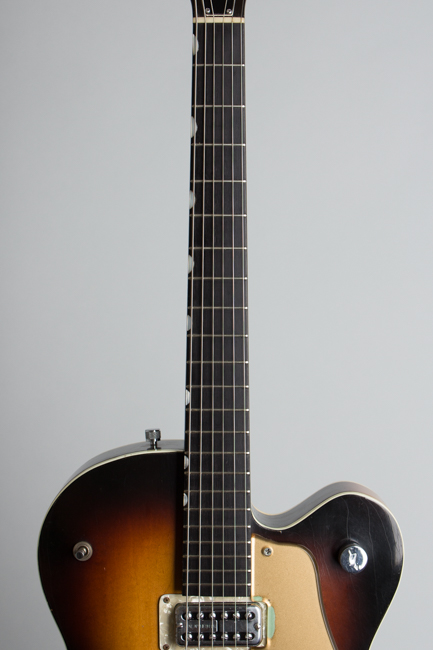 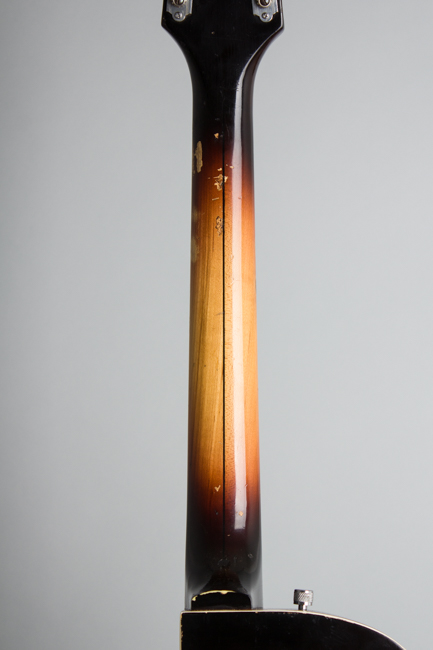 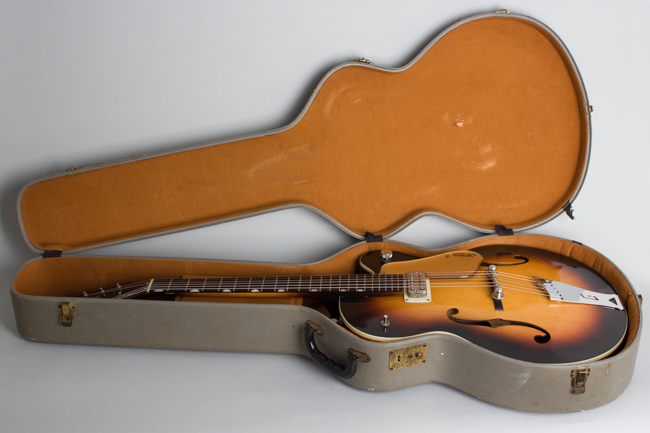 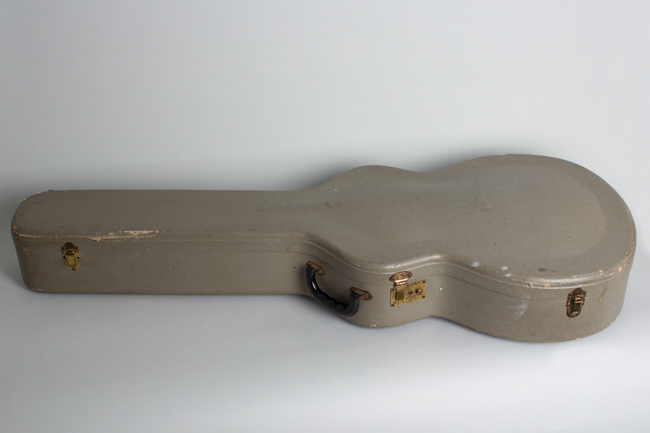 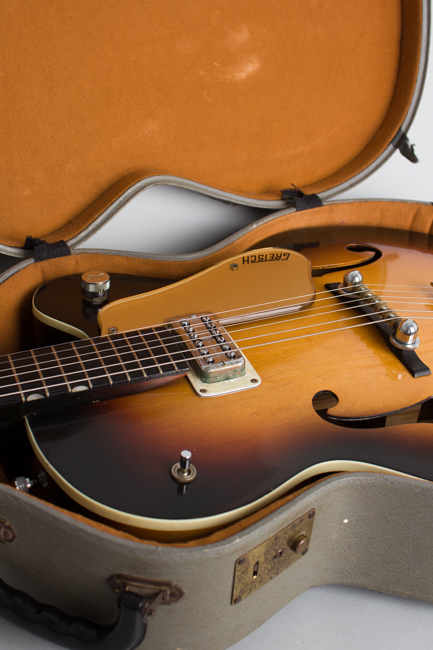 This is a lovely original 1958 Gretsch model 6124 Anniversary, from one of the first batches of the model. Very early Anniversary models sport several distinctive Gretsch features that often make for a much better guitar than 1960 and later examples. They are built on the same body and neck as the highly sought-after Chet Atkins Model 6120 using the "trestle braced" construction with the top bracing arching down to meet the back. This results in a stronger, tighter sounding guitar with much more resistance to feedback than a standard hollowbody but was only used during this 1958-61 period. It also has an ebony "neo-classic" fingerboard with no zero fret, and a deeper profile neck.

The single bound body has a fairly dark sunburst finish. The "Great Gretsch Sound" is provided by a single "PAF" Filter'Tron pickup by the fingerboard, the earliest variant of this classic Gretsch unit. It is controlled by a volume knob on the lower bout and a tone switch on the upper, which most players usually ignore. The bridge is the first version of the "Space Control" unit with taller "towers" at each end. Other typical hardware included the "G" cutout tailpiece, Waverly single-unit tuners and the unique screw-off strap buttons, still a great idea that has never really caught on elsewhere. While not particularly versatile this Anniversary is one of the best playing Gretsches we have had recently, a real honey with a singing and slightly gnarly sound when pushed.

Overall length is 42 3/4 in. (108.6 cm.), 15 7/8 in. (40.3 cm.) wide at lower bout, and 2 5/8 in. (6.7 cm.) in depth, measured at side of rim. Scale length is 24 1/2 in. (622 mm.). Width of nut is 1 11/16 in. (43 mm.).
This 63-year old guitar shows some wear, but has survived in better condition than many Gretsch instruments from this era. Most important, there is NO binding rot on the instrument at all, which is getting harder and harder to find with vintage Gretsch instruments. All binding is clean and solid, even the heelcap which (oddly enough) was sprayed over at the factory. The finish has some dings and dents but no major wear, mostly chips along the back edges and some scrapes to the back. The face is comparatively clean. The neck finish has some dings, dents and minor capo wear but nothing that affects play.

There is only one replaced part on the guitar. The very earliest Anniversary models had a unique plain thin mounting ring used with their PAF Filter'Tron pickups, made of clear celluloid back-painted in silver. The one on this guitar is included in the case, but has begun to out-gas so has been replaced with a jaunty replica made from pearloid pickguard material. There is a bit of paint damage to the underside of the pickguard from this, but no cracks in the guard itself. All other hardware is original as it left Brooklyn in mid-1958.

The neck is moderately chunky feeling with a deeper almost "D" shaped profile than later models. The neck angle on this guitar is very good, it has never had or needed a reset and is an excellent player, one of the friendliest Gretsch guitars we have had in a while. The original frets have just some light wear. The single PAF Filter'Tron has a great honking but still cutting sound, and this offers a lot of punch and snarl for a single-pickup guitar. It is housed in a period light grey Lifton hard shell case that is not standard Gretsch issue but may have been with it since the beginning. Overall Excellent - Condition.
×