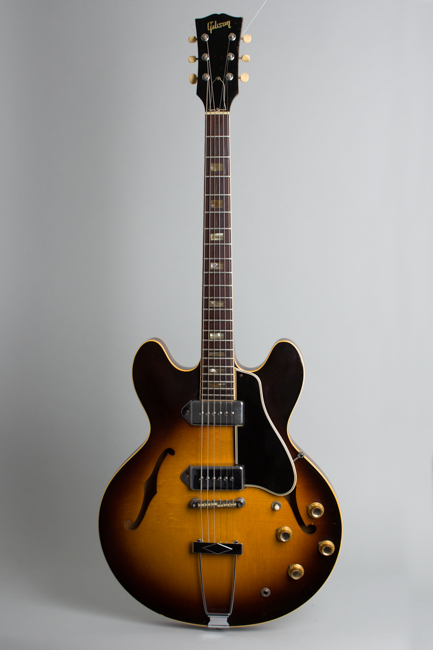 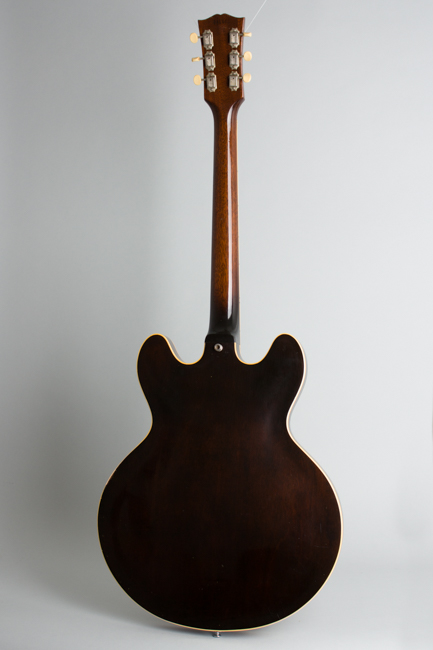 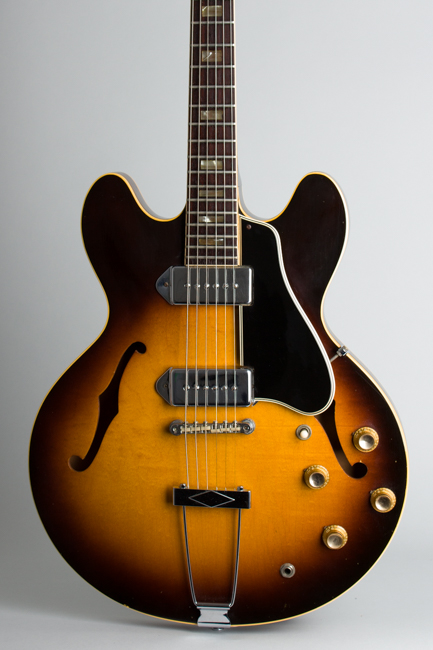 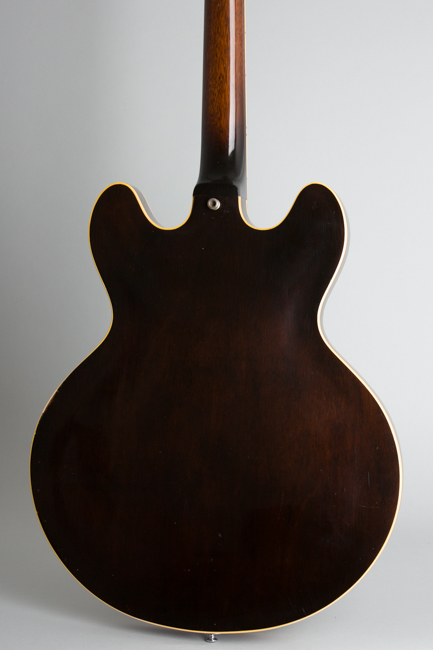 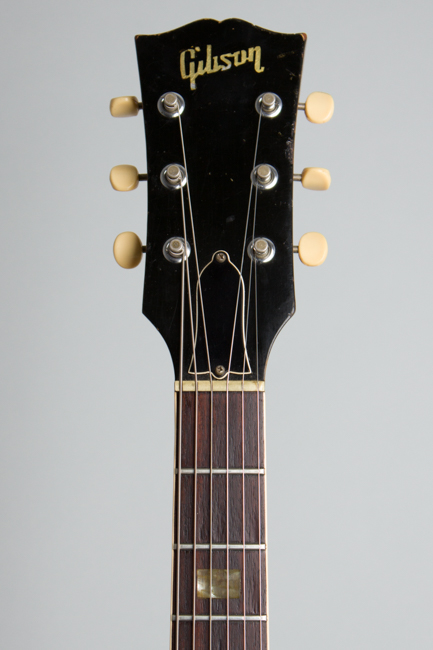 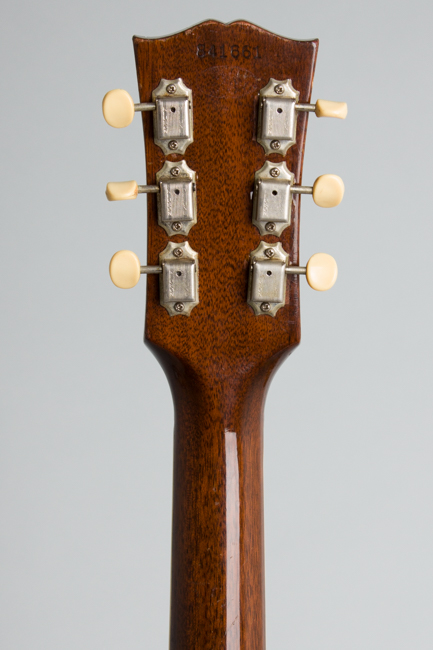 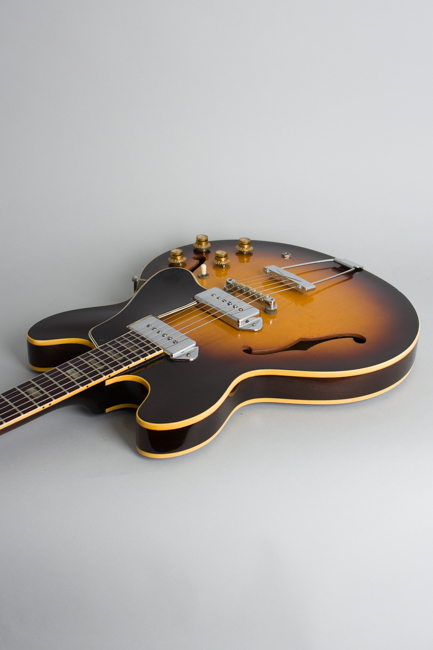 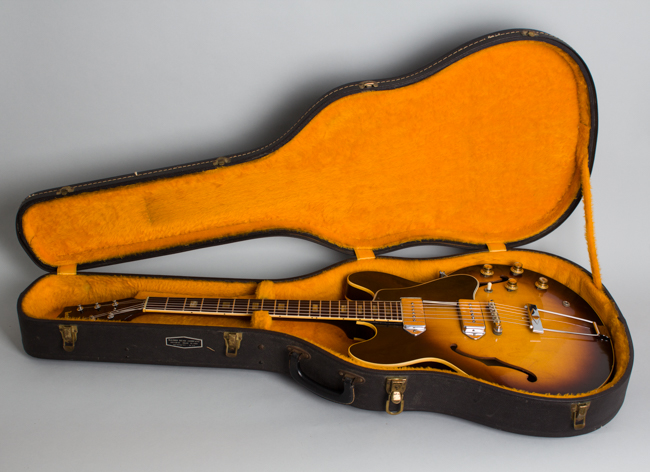 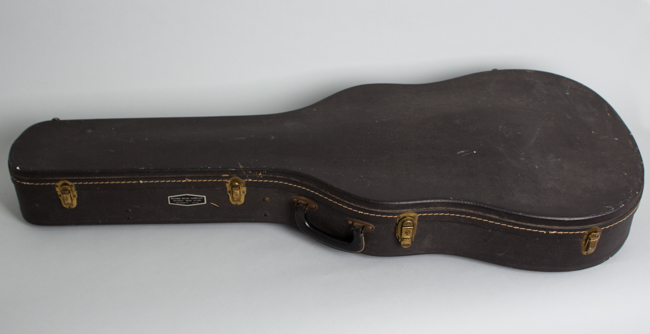 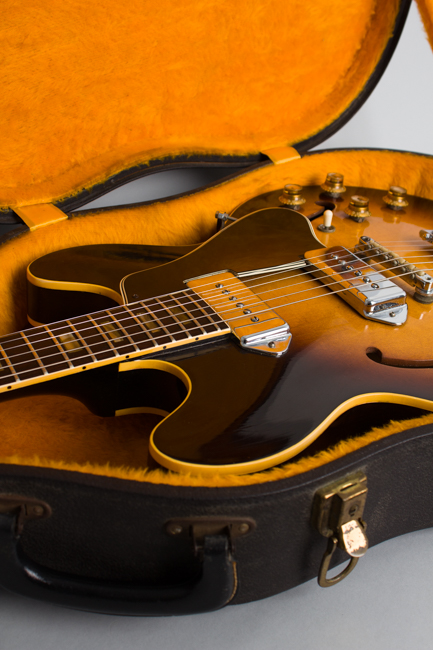 This is a lovely original example of a sunburst Gibson ES-330TD from 1966. This guitar has typical period features including a medium/dark "iced tea" sunburst top, bound rosewood fingerboard with pearloid block inlay and chrome-plated hardware including a tune-o-matic bridge with nylon saddles. The single bound body is fully hollow, unlike the semi-hollow 335-355 series and the neck joins at the 16th fret. The tuners are single enclosed Kluson Deluxe with plastic buttons. Two metal-covered P-90 pickups are mated to the standard Gibson wiring rig, with gold '60s style "capped" plastic tone and volume knobs and white switch tip.

The ES-330 is a great sounding very versatile guitar at home in many musical situations. Despite being intended by Gibson as an "amateur" instrument (the least expensive of the double-cutaway thinlines) the 330 has been heard on countless classic records in many styles of music since its introduction in 1959. Jazz great Grant Green used this model extensively on his most well-regarded early-1960's recordings.

A number of period bluesmen have been spotted with an ES-330 as well, including B.B. King, Chuck Berry and most notably Slim Harpo, who is nearly always pictured with one. The 330 and its nearly identical sister guitar the Epiphone Casino were featured in countless '60's British invasion bands, including the Beatles, Rolling Stones, Kinks, Manfred Mann, the Merseybeats and many more. Although the model fell from favor in the 100 watt Marshall era of the early 1970's, the ES-330 is today perfectly suited to most modern styles, vintage-influenced or not! This one has a better balance between the pickups than some we have had, and a lovely sound in any switch position.

This ES-330 is in very nice condition overall, and remains original with no major wear and the only alteration a strap button added to the heel. There is some very light checking overall, but not much play wear to the bold and unfaded sunburst finish. There are scattered small dings, chips and scrapes overall but really this is a pretty clean guitar. There is a small sticker-removal spot on the back of the headstock. The hardware shows some scuffing and minor corrosion here and there.

The original larger frets have some typical light wear but not enough to affect playability, there is some very light divoting to the fingerboard. As with nearly all of these a strap button has been added to the neck heel. Other than these minor points a lovely original example of this Gibson classic, an excellent playing and sounding guitar complete in the original yellow-lined hard case. An original store plaque from McCord Music in Texas is mounted on the case adding some extra mojo. Overall Excellent Condition.
×