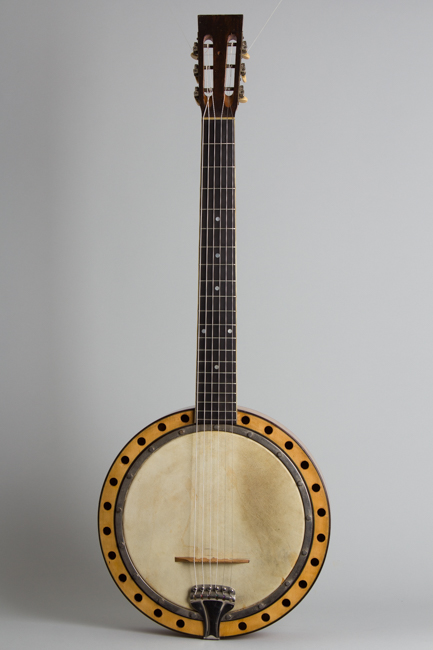 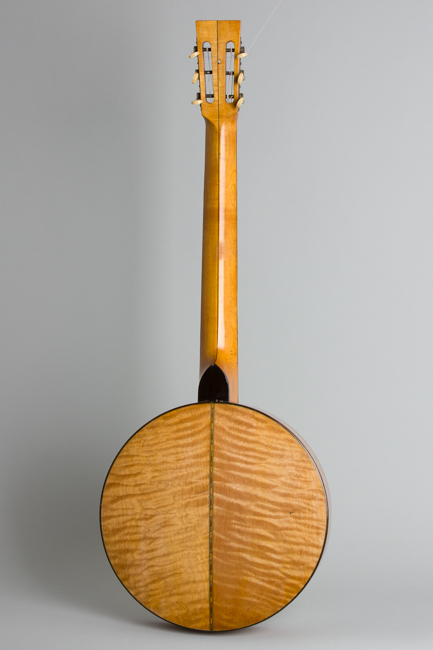 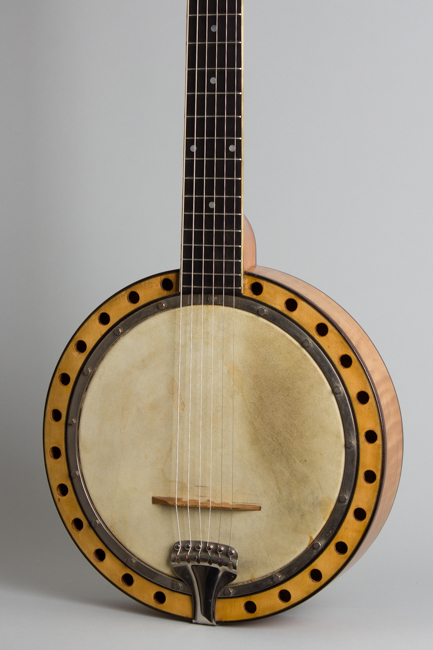 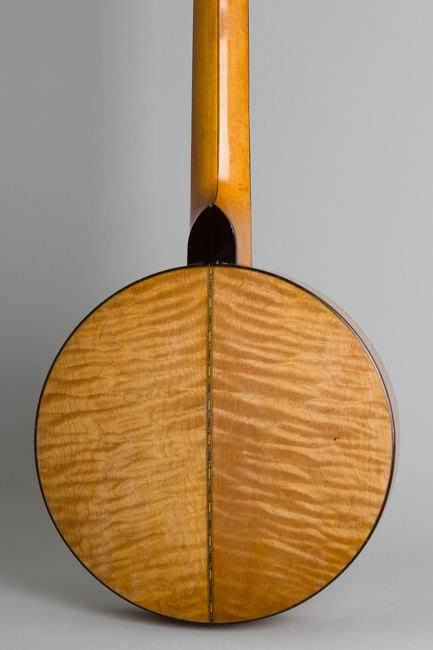 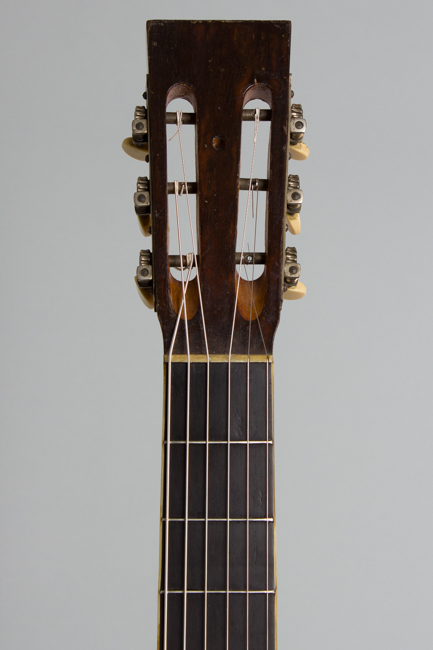 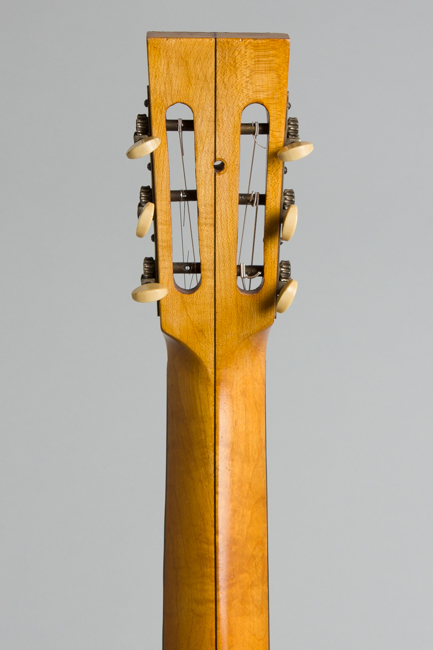 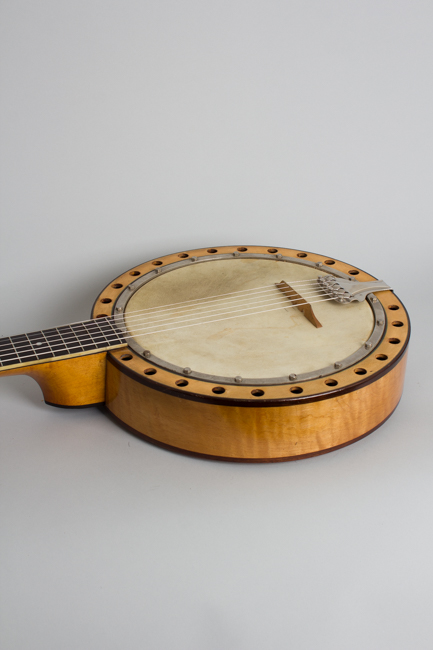 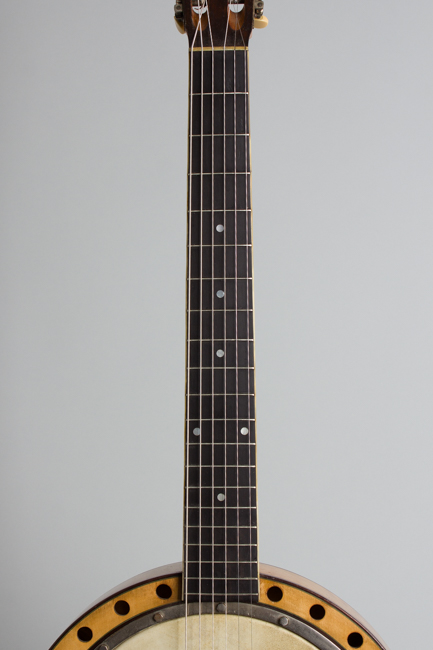 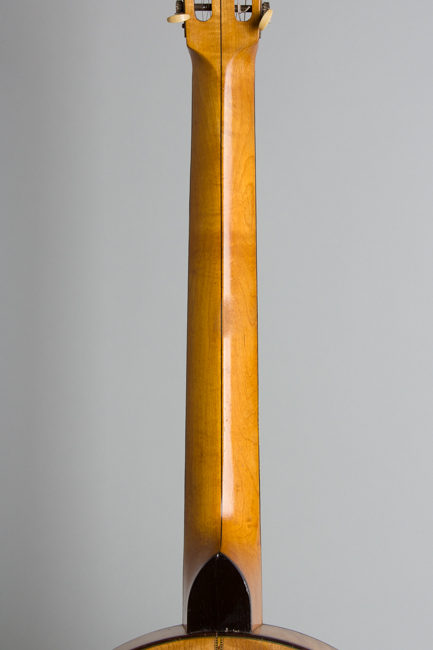 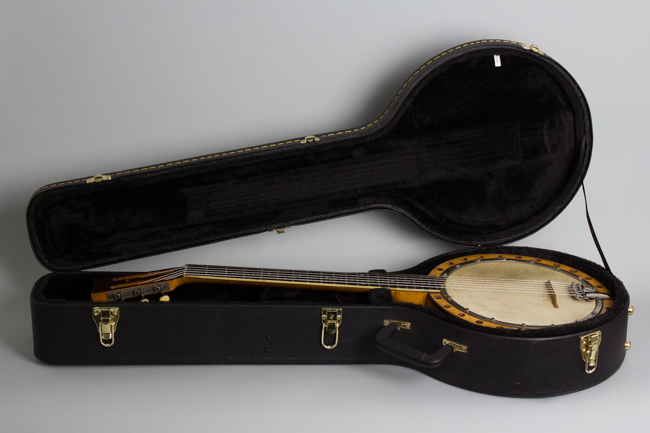 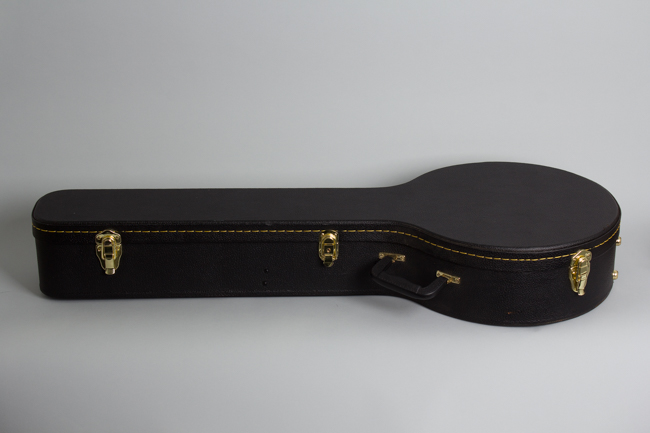 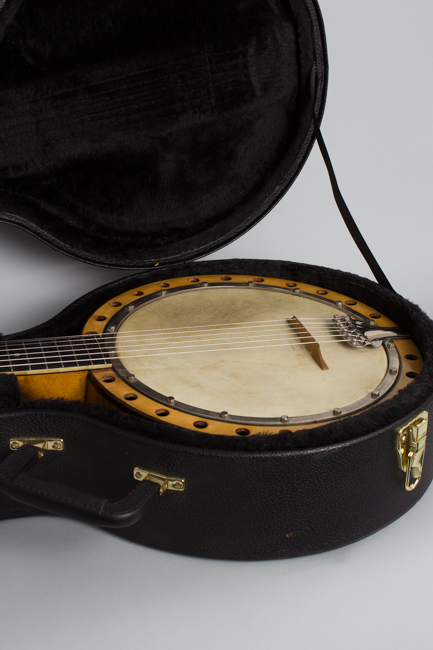 This very distinctive looking guitar-banjo bears no external markings, but anyone conversant with early 20th century banjo designs will recognize it as the work of Willian O. Schmick, confirmed by a small label situated inside the rim. Not much information has survived about Schmick, but he was one of many entrepreneurs with creative banjo ideas active in the first decades of the last century. Like many others he was located in the metro NY area, in this case Camden, New Jersey. Schmick applied for a patent on September 1914 for his distinctive banjo rim and patent #1180197 was issued to him on April 18, 1916.

Schmick used the brand name "Lyric" for this line and built all varieties of banjo: 5-string, tenor, plectrum, and mandolin besides this rare 6-string version. These seem to have been advertised starting around 1914 continuing into the later 1920s. Schmick took out small ads in many of the fretted publications of the day during, and seems to have sold a decent number of (mostly tenor) banjos while never amounting to serious competition for Vega, Paramount et. al.

Schmick's designs were unlike most American banjos of the 1920s, more similar in concept if not execution to the zither banjo designs popular in Europe. Schmick was early into the top tension field, beating Leedy, Ludwig, Vega and Gibson by years although the basic idea had been floating around since the 1860s. This instrument's 10 1/2" head without a heavy tone ring gives a balanced tone rather mellower than most 6-string banjos. The deep resonator with ports all along the upper rim adds volume and projection. The neck has a pronounced "V" spine and is fairly chunky profile, with an ivoroid bound ebony fingerboard and good grade strip tuners on the guitar-style headstock. The rim has wood binding on both edges and some nice marquetry work down the backstrip; the back is beautiful flamed maple.

It is sometimes mooted that components for Schmick's banjos were supplied by Vega in Boston. The quality of construction -- especially on the neck -- would support this conclusion. To us the deep-dish rim looks more like the work of Rettberg & Lange in NY; it's possible Schmick sub-contracted more than one maker to supply his raw components. One wonders of this design helped Vega formulate the Vegavox some years later, which the Schmick definitely prefigures with its very similar deep-walled resonator surrounding the top-tension rim.

Later in the 1920s Schmick's Lyric banjos were distributed by Carl Fischer in NY; they disappear from the catalog by the end of the decade. These are well designed and very nicely made instruments, eccentric perhaps but especially in this 6-string form very rare and quite playable. This is a very good-sounding and playable piece as well as a neat piece of local New York-New Jersey history.

This is a very clean, original and quite playable instrument, especially for being around 100 years old. The finish has some small dings dents and scrapes overall but no heavy wear, the plating is in similar condition. The back of the neck has some sort of light feelable spatter pattern on the treble side, not really distracting but noticeable.

The skin head and carved wooden bridge appear original, the only non-original fitting is the tailpiece which is a period style but later. The neatly drilled hole through the headstock is factory, to mount the tassel cord strap common at the time. The frets are original with very little wear. This is a really neat piece, not only rare and interesting but a really pleasant instrument to play. Overall Excellent Condition.
×