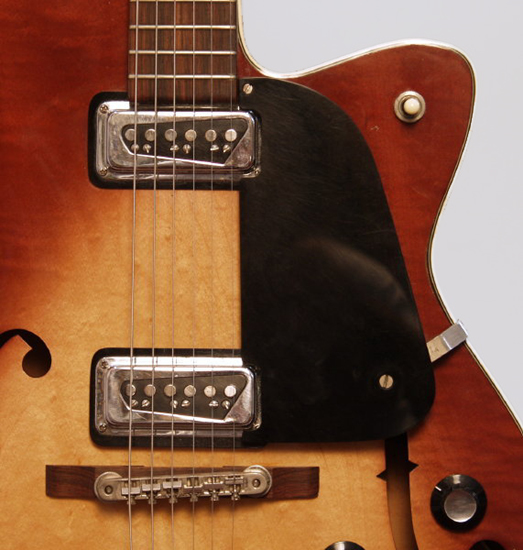 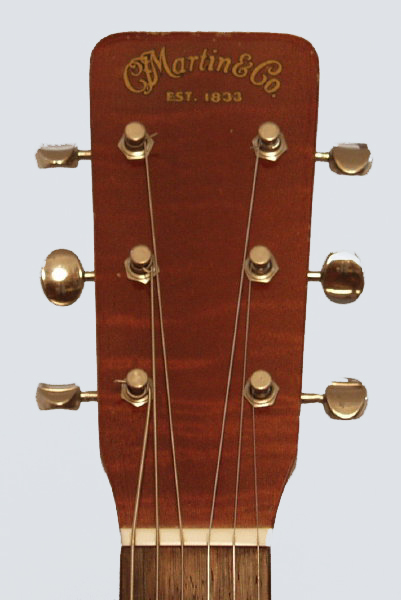 A great example of one of C.F. Martin and Co's more unusual creations. Although busy building flat tops for the folk boom, Martin must have felt an urge to get into the electric market, and after a stab at fitting DeArmond pickups to Dreadnoughts, came out with this thin hollowbody series in 1961.

The F-55 is the middle of a three model line, a single cutaway guitar with two pickups. This guitar is one of the first 15 production models recorded as having been built during 1961, the debut year.

The slim sunburst-finished body is triple bound; the dot-inlayed fingerboard is unbound. The neck is slim and comfortable, with typical Martin contours and single enclosed metal-button Kluson tuners. The wiring rig with a switch and individual tone and volume knobs is standard Gibson style, and the pickups are even wired in phase (unlike Guild practice). The chrome stamped metal vaguely "M" shaped tailpiece is the guitar's raciest feature.

While these guitars have been ignored and generally derided since their short production run ('61-'65), perhaps the joke's on us, because viewed without prejudice, this is actually quite a good instrument! The craftsmanship is as good as you'd expect from Martin, it's a comfortable thin body design, and the DeArmond "Dynasonic" pickups are the same as those on some of the greatest-sounding Gretsch and Guild guitars, albiet in a slightly different cover.

While the styling might be best described as "conservative" (it comes mostly from Martin's 1930's archtops), in sound and playability this is fully the equivalent guitar to a Guild Starfire, Gretsch Anniversary of Gibson ES-225. Maybe Johnny "Guitar" Watson, Skip Spence, and the Music Machine's Sean Bonniwell knew something after all…

Extremely nice original condition. All original except bridge has been replaced with a nickle-plated Tun-o-matic with a wooden base. Only a few tiny dings and some wear on the headstock top keep this from being near mint. OHSC also extremely well preserved. Excellent + Condition.
×