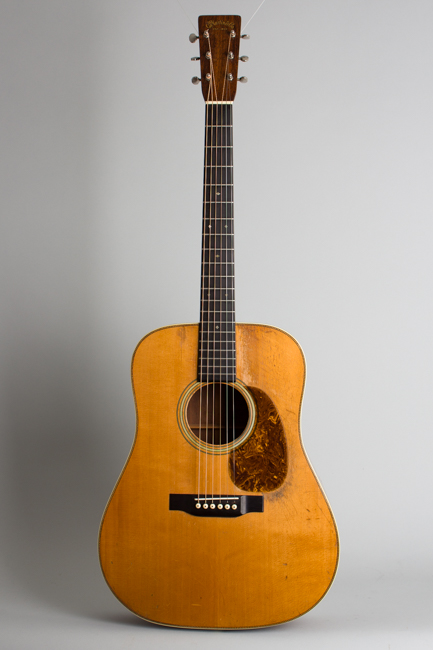 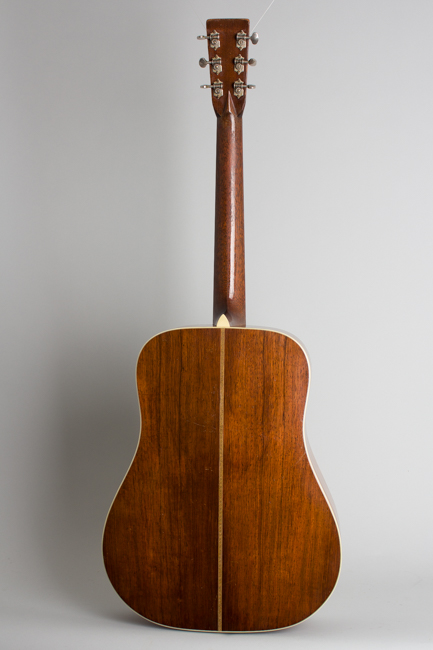 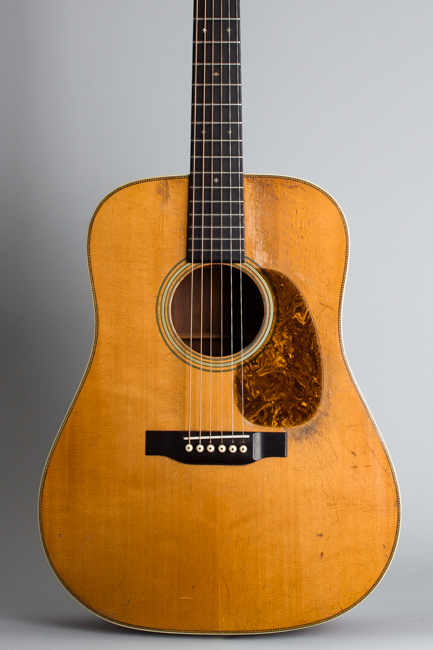 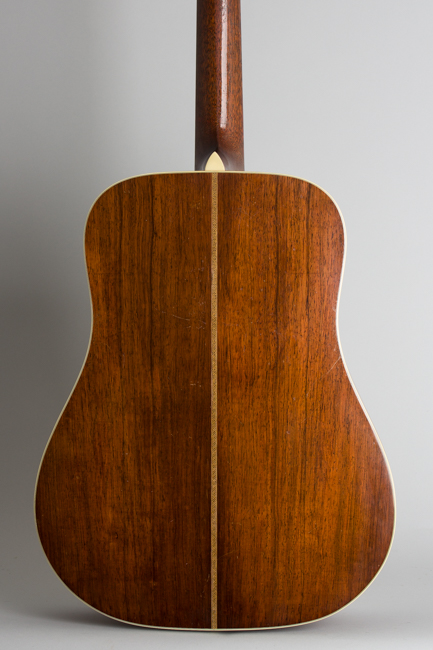 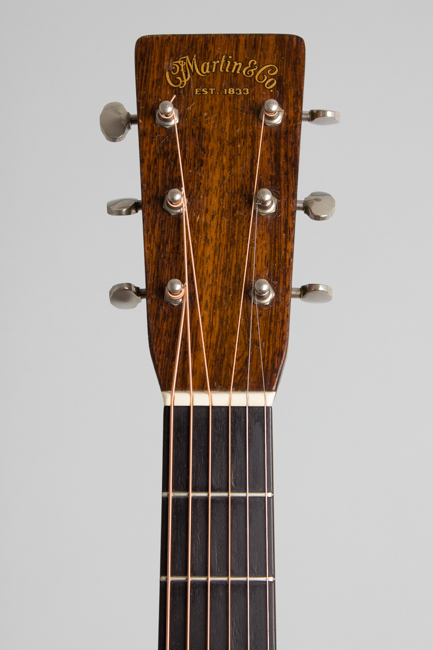 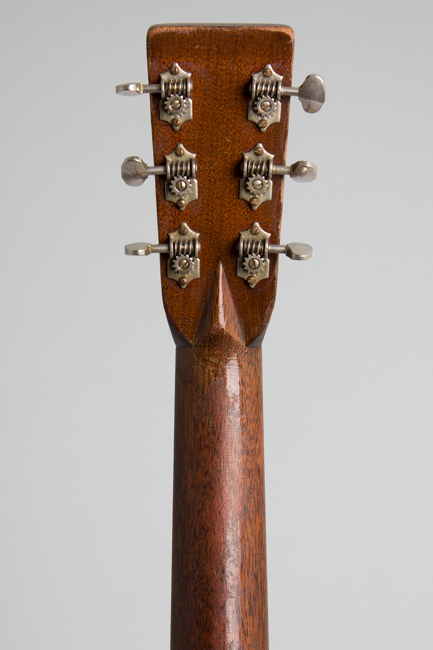 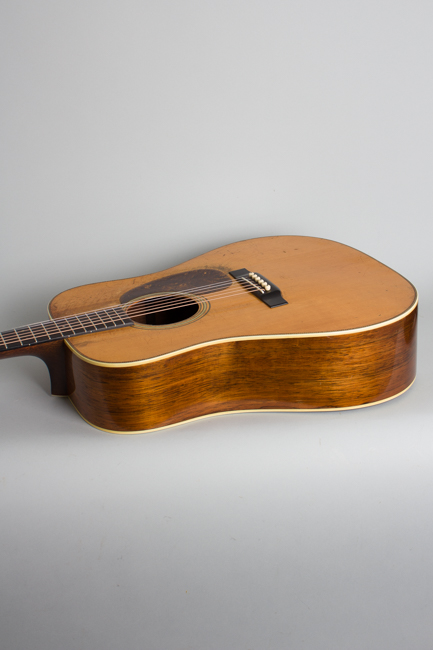 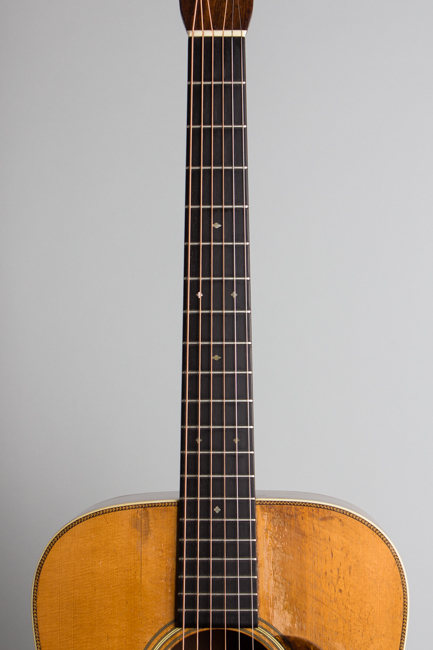 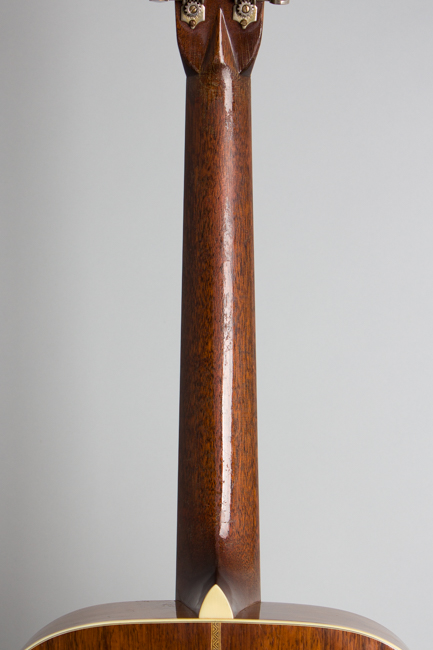 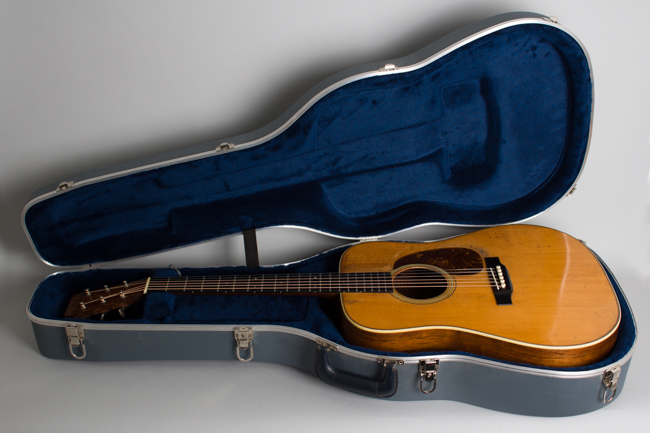 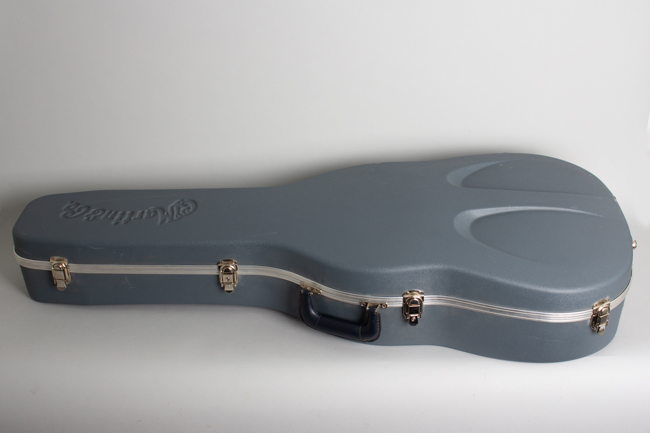 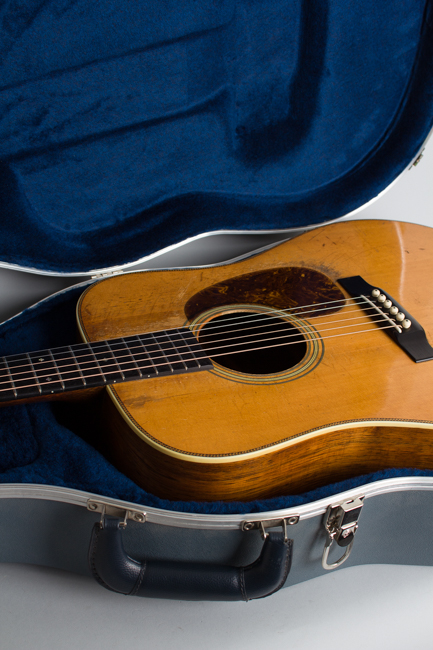 There are certain guitars that are simply the standard by which all others are judged-the 1938 Martin D-28 "herringbone" is certainly one of them. This example shows a decent amount of playwear, and there have been repairs over 80+ years. BUT, it you want the sound...THE sound...this guitar has it in spades. The 1938 D-28 is, to many, as close to a perfect flat top guitar as has ever been made. If you are seeking the power and depth of a Dreadnought with the sweetness, sparkle and singing character of the best pre-WWII Martins the D-28's of this early period are still unmatched.

The 1938 D-28 shows the original classic features of the model which have been widely imitated ever since. These are often referred to as a "bone", after the namesake "herringbone" wood marquetry trim around the top. Whether this cosmetic feature has any affect on the sound is a hotly debated (and unanswerable) question; Martin stopped using it on their instruments by mid-1947. By then the D-28 had seen a number of other changes, most importantly the discontinuation of the scalloped top braces so the instruments of the 1940's and '50's evolved to have a different sonic character.

The other features of this guitar are classic prewar D-28 appointments. The top bracing is delicately scalloped and the top is built rather lighter than the typical 1950's style. The back and sides are beautifully straight grained Brazilian rosewood, with a lighter more reddish hue than many later instruments. The top is very tight-grained Appalachian spruce, the pickguard just below the soundhole is made of tortoise celluloid in a small "teardrop" shape. The ebony bridge is the then recently-designed "belly" shape with a canted bone saddle.

The neck is mahogany with an unbound ebony fingerboard decorated with discreet slotted diamond pearl inlay. The peghead is faced in straight grained Brazilian rosewood with the "C.F. Martin & C." decal at the top. The neck profile is round backed but with the slightest hint of a "V" profile in the way the sides bear away from the center as it moves towards the nut. The tuners are early-pattern Grover G-98 Sta-tites, amazingly still intact and functional even after many years of use.

Cosmetically this guitar shows signs of long use and heavy playing, likely into the open mikes of radio studios and barn dance stages. In this environment a guitar had to have the maximum of both depth and projection, and many Country and Western performers of the period (accent on "Western") found the Martin D-28 was the best instrument available for this highly competitive musical environment. Costing an even $100 in 1938 (without case!) the D-28 represented a sizable investment for a working performer, and once obtained was often played constantly as a tool to literally put food on the table.

This example has a serial number dating to the very end of 1938. It may be one of a total 121 D-28s registered as shipped that year, or possibly one of the 123 logged out in 1939. In either case compared to modern production that is a very paltry number, but depression economics made a $100 guitar unobtainable to many. The mahogany-bodied D-18 cost just over half as much at $65 and sold in larger numbers, but for many the D-28 represented the ultimate stage guitar.

In the minds of most acoustic guitar players, collectors and historians very few instruments even approach the pantheon of the pre-war rosewood Martin Dreadnought in terms of both sound and historical importance. In the period when they were built these instruments were judged by the way the rhythm they produced powered the whole group-the kind of solo hot pickin' that characterizes the modern audience for these guitars was several generations away.

Although the D-28 is considered the ultimate Bluegrass guitar, "Bluegrass" as a musical style did not yet exist. Bill Monroe was active as a performer, but it was not until the 1940's that the "classic" Monroe band with Lester Flatt on a D-28 would establish that paradigm. The ultimate Bluegrass guitar for sure, this is also a superlative instrument for just about any style of playing. This 1938 model has many of the most desired features: the newer "rearward" shifted scalloped X-brace pattern but the earlier slightly wider nut. Worn in as it is, this is still a beautiful guitar to behold, a true joy to play and a significant piece of fretted history.

Over many decades this guitar has been heavily played and had some careful restoration, but all efforts have gone to preserving the instrument's original integrity and character and this well-worn guitar still sings with its unimpeded original voice. A repair reciept is included from highly regarded Martin guru T.J. Thompson dated 4/4/2002 detailing the following work: Repair loose cracked X brace, repair spruce top damage under bridge, New ebony bridge, straighten and refret neck. Thompson is considered one of the finest craftspeople available to do this work, and any instrument worked on by him is guaranteed tom have had the best care possible.

In the case are also older repair reciepts dating to 2001 and 1992 from Stratford Fretted Instrument Workshop. It is rare to have the repair history of an instrument as well documented as this one. For one thing there have never been any neck or heel cracks. The neck was cleanly reset some time ago and this appears to be probably the third fret installation, still to the original smaller wire spec.

The body has a number of fairly minor crack repairs. The bridge and bridgeplate have been replaced. The receipt included in the case states that T. J. Thompson replaced the bridge; it is crafted with the correct footprint and contours of the 1938 original but is has a short drop-in saddle installed, T. J.'s preference for bridge replacements. There is some light scarring around the bridge and two carefully sealed hairline cracks, one extending about an inch and a half from the bass side bridge wing of the lower bout and another extending about 3/4 of an inch from the treble side bridge wing towards the lower bout.

There are two more carefully sealed top cracks; one extending about two inches on the bass side upper bout and another next to the treble side of the fingerboard extension. As with many of these early Dreadnoughts there is some repair around the fingerboard/soundhole junction, where the soundhole purfling has been carefully re-aligned. Inside the guitar, there is a popsicle brace added to reinforce the area under the fingerboard extension. It was evidently placed in the guitar early on, it is fit snugly up against the transverse brace in a method that was employed by the Martin factory for a short time in 1939-40, though we can't be certain that the guitar was returned to the factory to receive this work so soon after the initial manufacture. There are no other cleats added inside the guitar. The only other anomoly is that the strip of maple added by the factory to reenforce the tailblock has gone missing, though there are no signs of any trauma around it to explain the dissapearance.

The bridgeplate has been replaced with a maple bridge plate that is both slightly thicker and extends further towards the tailblock than the original. Furthermore, the new larger bridge plate is not tucked in under either leg of the x-brace. The original bridge plate would have been glued into two cavities carved into each wing of the X-brace. A void can be observed next to the new bridge plate where the original would have been tucked in. Each leg of the x-brace adjacent to the bridge plate also shows signs or being reglued and a crack has been repaired in one of the x-brace legs; these repairs are all now solid and secure. All of this work results in a guitar that is structurally solid, with only a slight bellying behind the bridge under full tension and the guitar manages to retain the full depth and breadth of the tone these instruments are known for.

The finish is original, and shows ding, dents, crazing, scrapes and all manner of small disturbances. The finish on the back of the neck is worn down to the wood below the 6th fret by the action of the players thumb, mostly, and remains largely clear of dents and other impediments.This area has been French-polished to protect the bare areas of wood along the joint between the neck and the fingerboard. A thorough inspection under black light reveals the bulk of the lacquer to remain original-all touch-up and added finish is only localized to the worn areas of the neck- the guitar has never had a wholesale overspray.

While this guitar has seen what likely amounts to several careers worth of use it remains a spectacular musical instrument, well worthy of its esteemed reputation. When played hard it sings with the authoritative tone these are renowned for, yet even when played softly it is a responsive and lovely sounding instrument with a wide range of tones depending on the players touch. Although often typecast as a Bluegrass instrument, this herringbone D-28 is a wonderful sounding guitar for any style of play. A true survivor, a great piece of history and just as good an ol'guitar as anyone is likely to find, now or then. Includes a '70's Martin HSC. Overall Very Good + Condition.
×