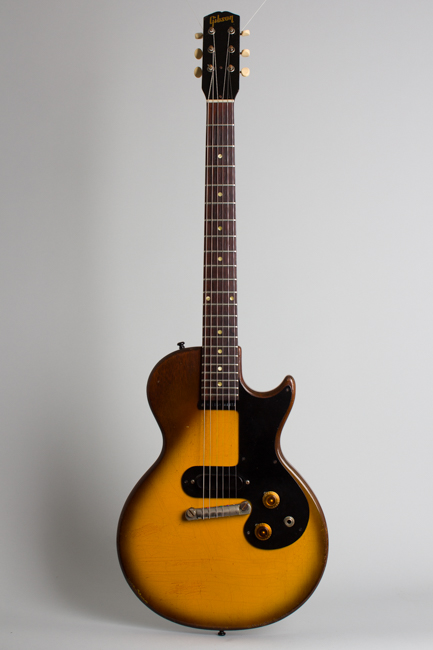 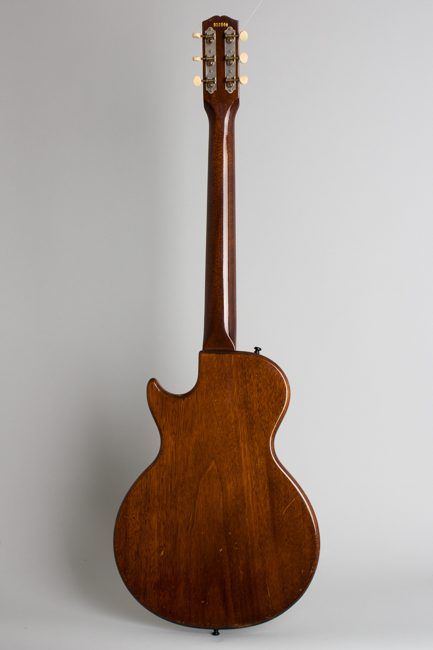 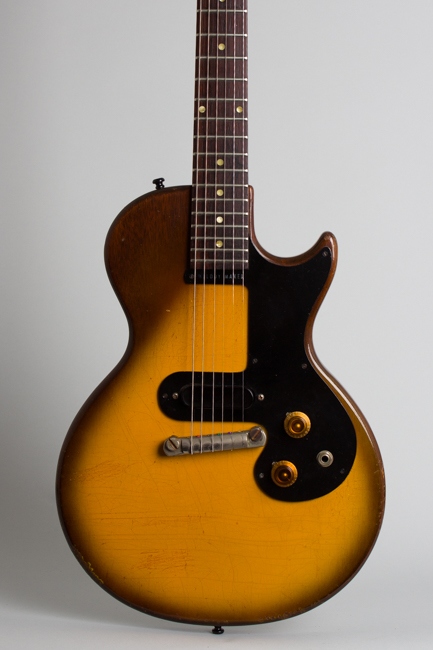 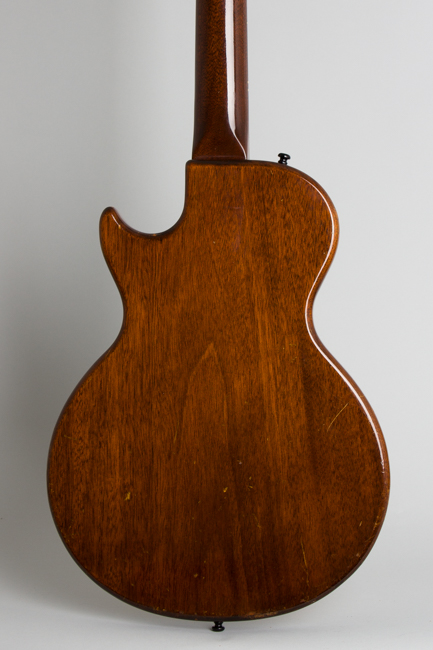 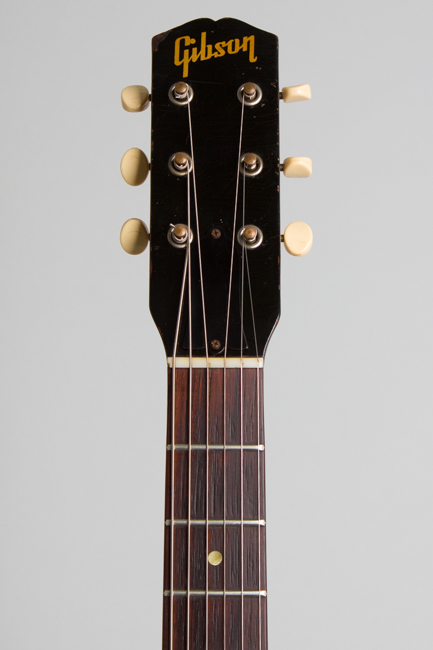 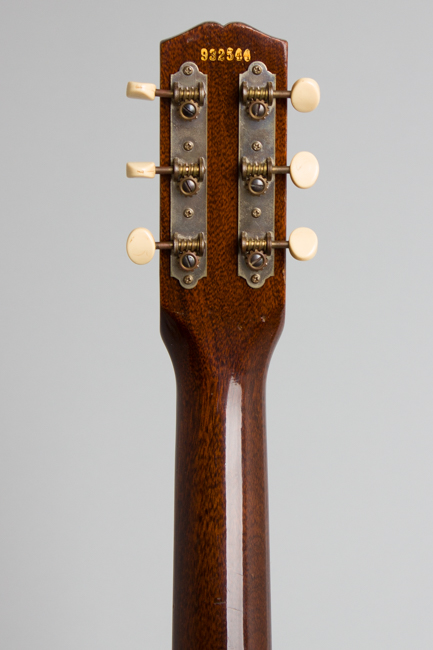 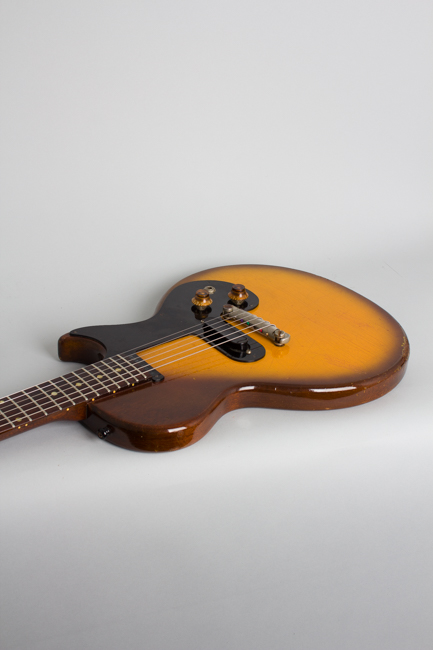 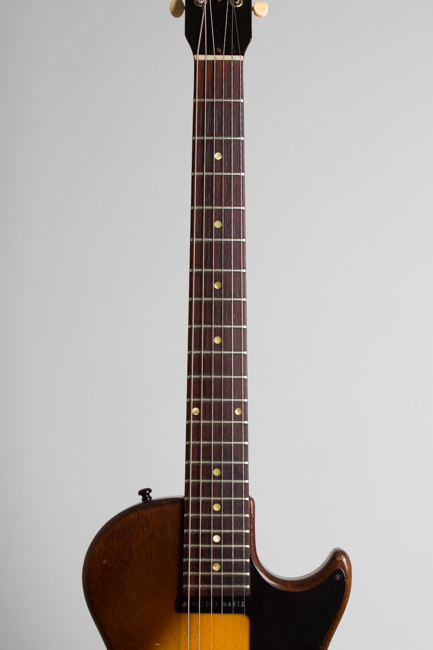 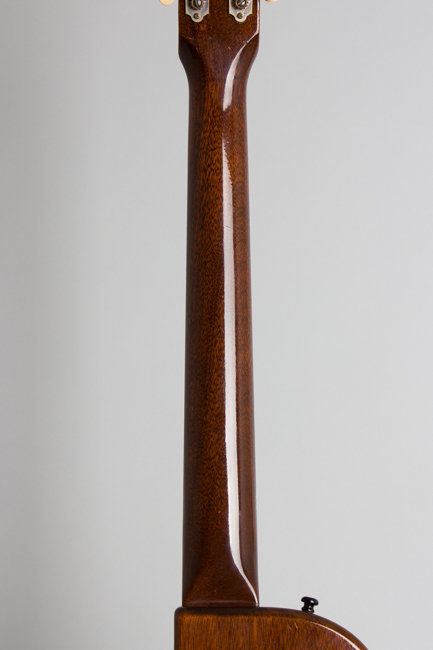 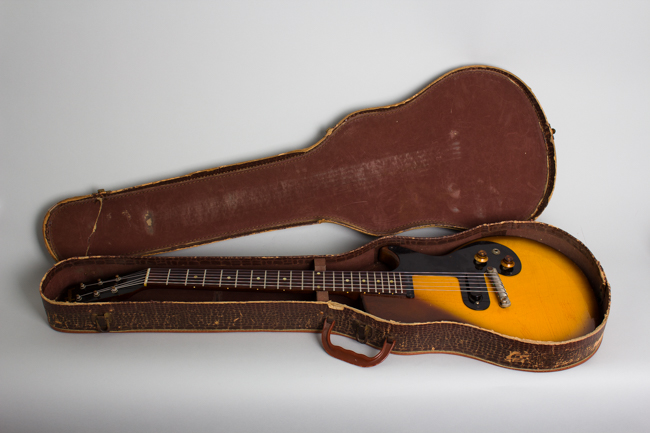 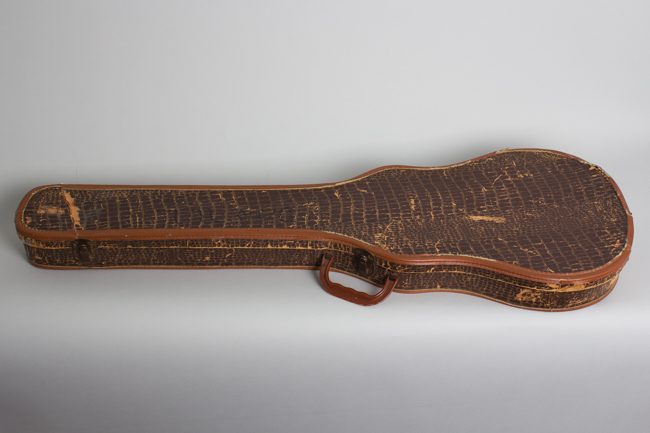 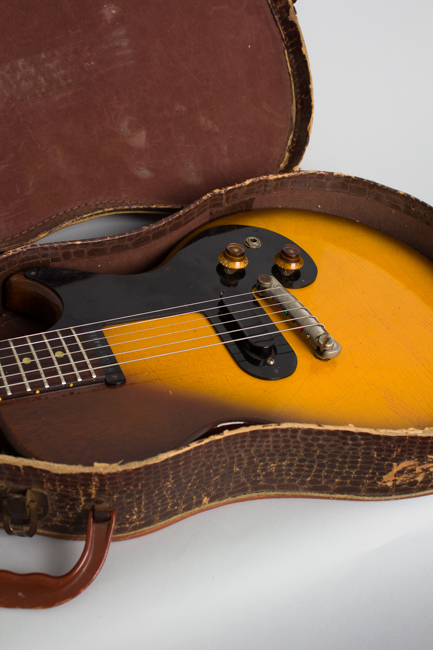 There's a good case for 1959 to be named the greatest year in Gibson's long history, with the flame-top Les Paul, new ES-335 family and many other of the company's greatest creations cataloged side by side. At the bottom of the electric price list was this humble Melody Maker, as simple an instrument as the company offered yet still a superb playing guitar for the price. Originally the Les Paul Junior was conceived as the student grade electric, but Gibson saw an emerging market with thousands of teen prospects looking for an even more affordable option. The model was originally announced in mid-1959 as the "Les Paul Melody Maker" but someone at Gibson realized that that meant they'd have to pay him a royalty on each one sold, so the implied endorsement was removed.

This late '59 first-year Melody Maker is a superbly simple instrument, with no frills but eminently playable retaining the superb handling of the company's more expensive solid-bodies at a lower price. It is pretty much unadorned and has some basic economies (single-layer pickguard, openback Waverly strip tuners, a single-coil pickup with no polepieces and a narrow headstock with a decal logo) but in the important ways this is still a Gibson instrument. The ultralight stop tailpiece/bridge and amber knobs are standard fittings for the time; the pots are date coded to the 33rd week of '59.

The sunburst top is the same finish until recently employed on the Les Paul Juniors, the body itself is the same shape as the pre-1959 version of that favorite but noticeably thinner at the rim. This one has a fairly beefy neck for a student guitar, with the classic Gibson rounded '59 profile many consider the all-time favorite. The thin-coil pickup is lower in output than other Gibson units, but still has a bright but sweet sound. This early model has the slightly larger coil used on the model through mid-1960. some feel it has a better sound than the ubiquitous 1960s version.

This instrument sold in 1959-60 at $99.50 (without the case) for either this or the 3/4 size variant, which Gibson more actively promoted at first. This full-scale version has usually been preferred by most players, but was outsold the first year by the short-neck model. 1397 of these were shipped 1959, a decent number at the time but well below the numbers the model would sell in in the 1960s. This first version is generally considered the best of all Melody Makers, one of the friendliest guitars to play ever made.

This is a nice original example of the earliest Melody Maker, showing a decent amount of wear overall but no alterations or repairs. The finish shows typical checking with dings, dents and scrapes to the finish, most heavily to the body edges. The upper bass side headstock corner has a larger chip. The back of the neck is comparatively clean with only very small dings and the original frets show very little wear.

All original hardware inside and out is original except for a spliced ground wire, the pickup cover is shrinking a bit and there is some general plating wear to the tailpiece and bolts. The G string tuner is a bit bent but works as well as it ever did. This is a superb player, very lightweight as all MM's tend to be and super easy to handle. This would make a great gigging 1959 Gibson solidbody, still housed in its original alligator-grain chipboard case which is quite beat up with a lot of seam repairs but still in one piece! Overall Excellent - Condition.
×