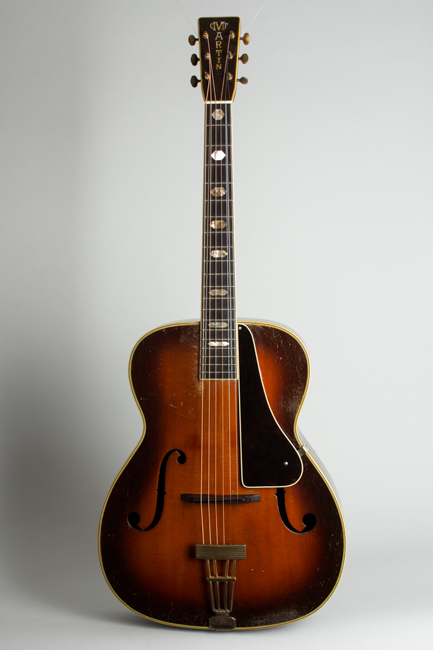 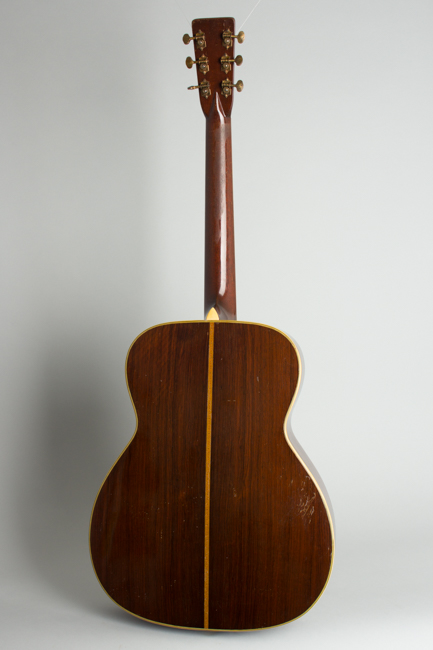 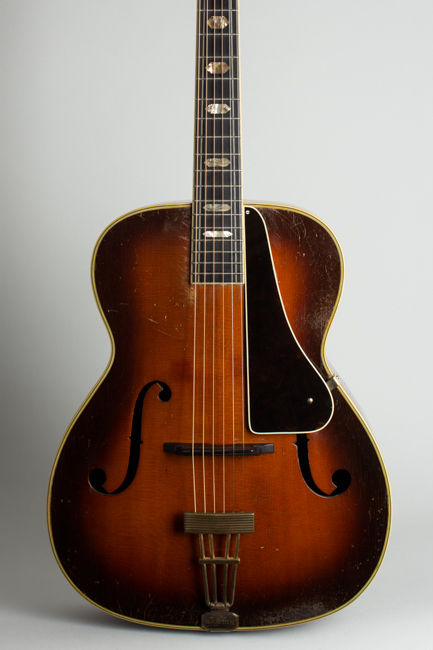 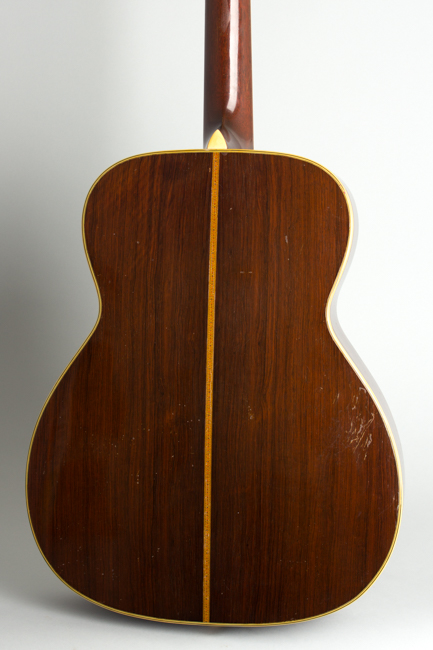 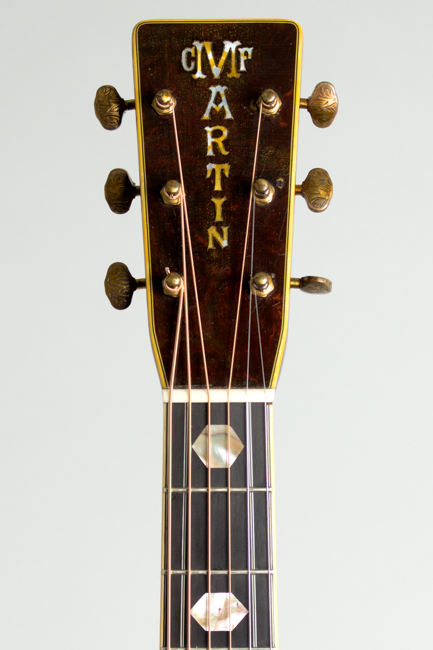 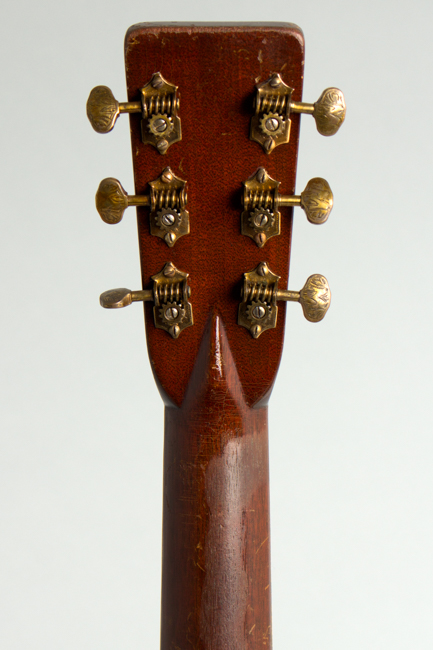 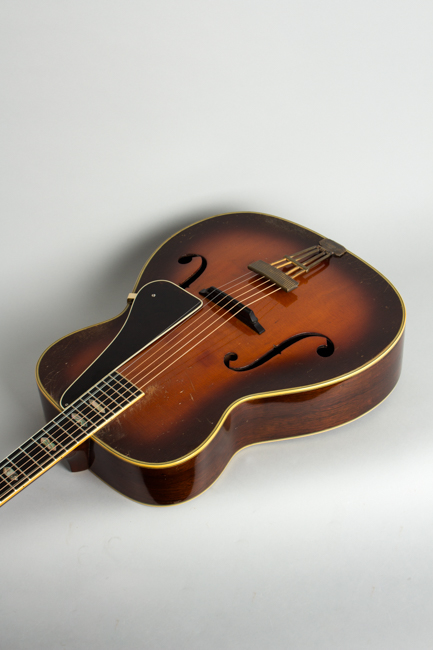 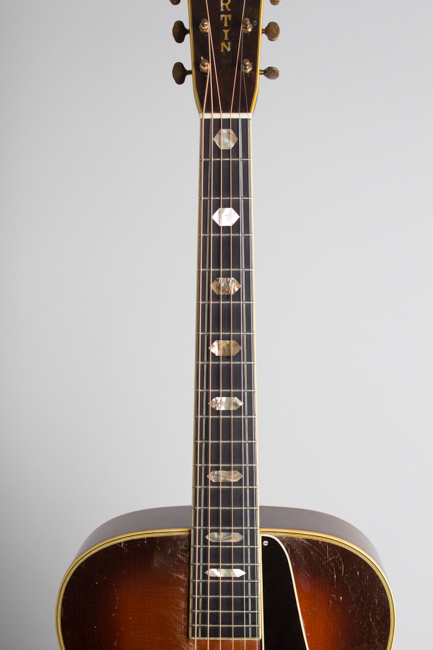 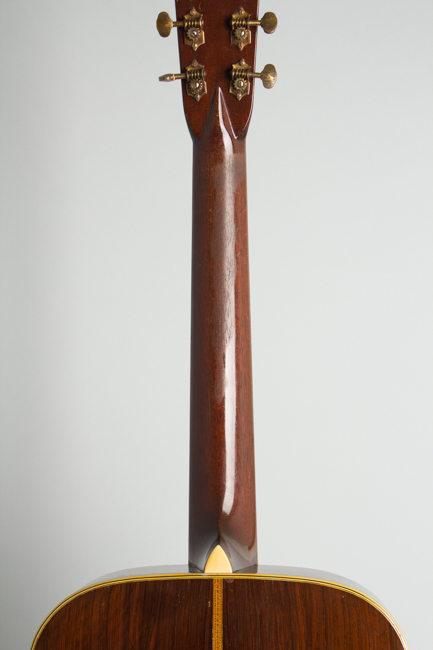 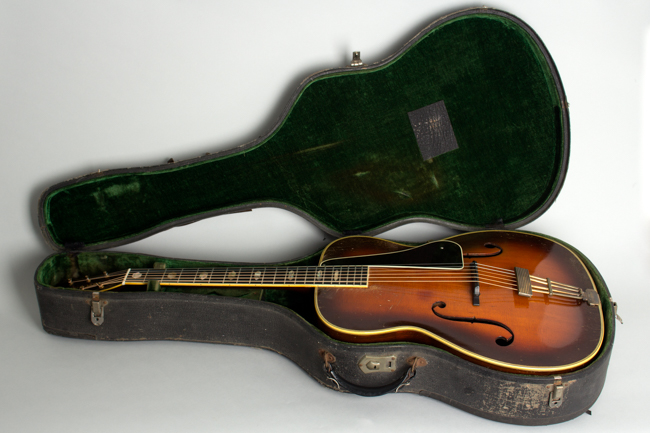 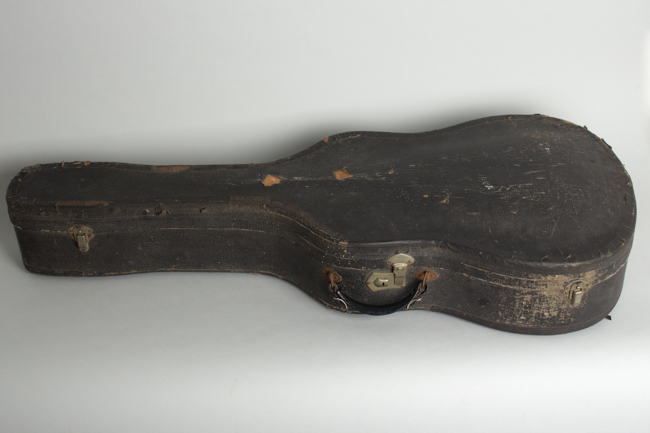 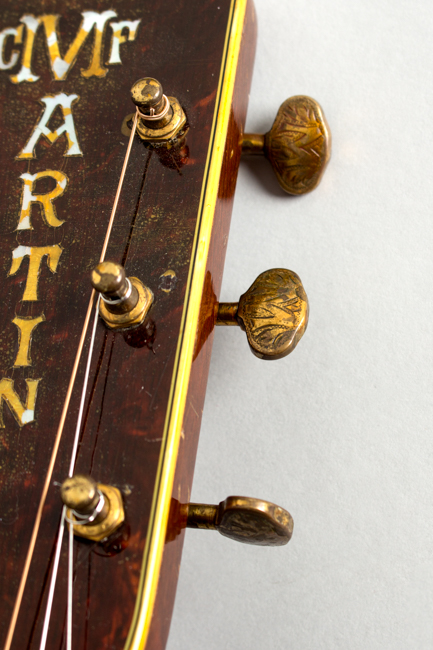 The C.F. Martin company tried, they really did, to be a player in the swing-era arch top guitar market of the 1930s. While most other major builders took the easy route and slavishly copied Gibson's designs, Martin strove to be unique and bring their own original concepts to the table. While this approach ultimately proved a blind alley, they did create some often beautiful instruments in the process, none more so than this one -- the model F-9. "Refined in every detail this is the guitar deluxe for the modern player...a masterpiece of design and workmanship" Martin's catalog hopefully announced in 1935.

This was the TOP of the Martin line in the 1930s, not the D-45; that fantastic Cowboy creation trimmed in glittering pearl was second fiddle at the time. In 1935 this 16" wide carved top guitar was introduced at a price of $250, the most expensive thing Martin had ever offered. When the D-45 was made a standard model a couple of years later it was cataloged at "only" $200. The F-9 was Martin's flat out attempt to compete with Gibson and Epiphone for the pro orchestra guitar market but it was not to be, and the flat-top continued to be the company's success story.

This is an extremely deluxe instrument as benefitted by its price and status, but the construction and design are eccentric compared to the accepted arch top template of the 1930s. The back and sides of the 16" "Grand Auditorium" body are solid Brazilian rosewood of the highest grade. The back is arched over braces, not carved like a standard arch top. The top IS hand carved from fine-grade Appalachian spruce with violin-style f-holes and angled parallel bracing. It features a deep shaded sunburst finish, while the back and sides show the natural rosewood. The top and back are 7-ply bound with 5-ply side lines; the fingerboard is triple-bound with an inlaid triple strip down either side. The headstock is also triple-bound with a large inlaid "CF Martin" in pearl that would later become a coveted feature of their highest grade flat-tops.

Martin never adopted the elevated fingerboard design that Gibson pioneered on the L-5; instead the F-9's board is glued directly to the top like a flat-top instrument would have. To compensate for this the neck attaches to the body at a rather oblique angle, a unique feature of Martin arch-tops. The neck itself is fairly shallow with a soft "V" profile. The black-as-ink superb ebony fingerboard has hexagonal abalone inlay that also later migrated to the D-45. The gold-plated Waverly tailpiece is hand engraved "MARTIN" on the base, and the individual gold plated Grover tuners are engraved with an "M" design on the buttons. The bridge is a beautifully sculpted adjustable all-ebony unit seen only on Martin arch-tops of the time.

As might be expected, the F-9 is one of the rarer pre-war Martin guitars with all of 19 shipped 1936, and a total production over 6 years of only 56. The model never caught on with the orchestra players it was aimed at, who by that point had a range of 17' and 18" fully carved guitars to choose from. A few cowboy players gave it a chance, but overall that market preferred Martin's superlative flat-top guitars.

Played today, the F-9 responds about as one would expect, with a timbre combining arch-top and flat-top elements and plenty of volume. Some of these have been converted to flat-tops over the years...a somewhat complex procedure, due to the oblique neck and angled heel design, so this original example is even rarer than it would otherwise be. Considered by some Martin fans to be an historical mistake, we prefer to think of the F-9 as a uniquely lovely eccentricity, a thing of beauty in its own right. It is certainly a finely made and excellent-playing guitar, with a sound all its own.

This guitar shows some moderately heavy play wear but remains in nicely original unaltered condition. Although this model is often considered a Martin oddity, somebody definitely played and enjoyed this F-9 for years. The finish overall has its share of scuffs, scratches, and dings, with the top showing the most wear. There are pick marks above the fingerboard and below the pickguard, and a more mysterious area of loss down on the treble side of the tailpiece.

The back of the neck is worn down to the wood along the spine; the fingerboard has been neatly refretted with period correct wire. There are no cracks anywhere on the instrument, and everything is structurally solid. The original tailpiece has a fairly clean repair at the baseplate; the pickguard and bracket are nicely done reproductions.

The guitar plays very well with a unique sound, combining the attack of an arch-top with some of the richness of a rosewood flat-top instrument. It still resides in the original HSC, which has a decent amount of external wear -- somebody loved this guitar and played it out a lot over the years! Very Good + Condition.
×