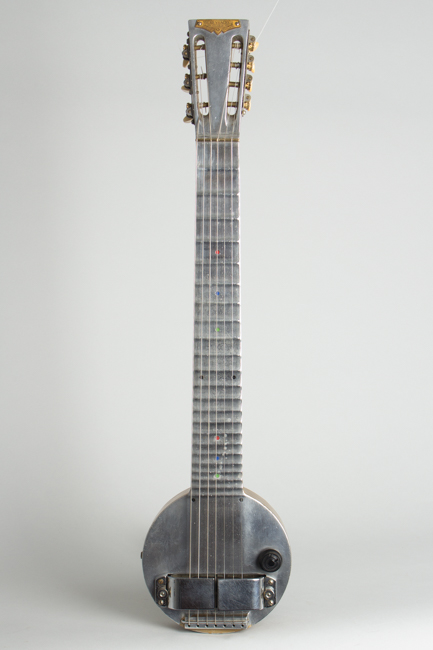 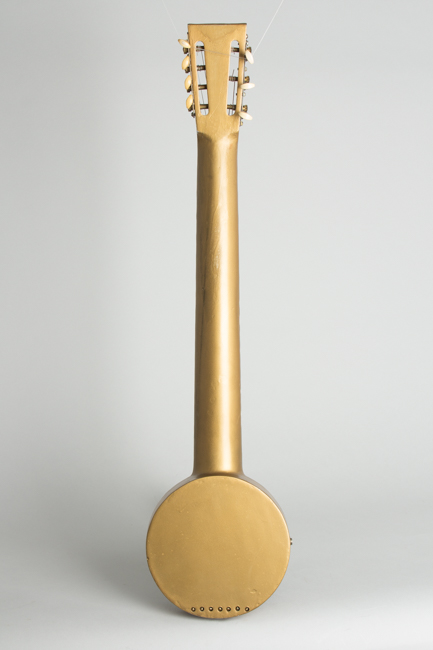 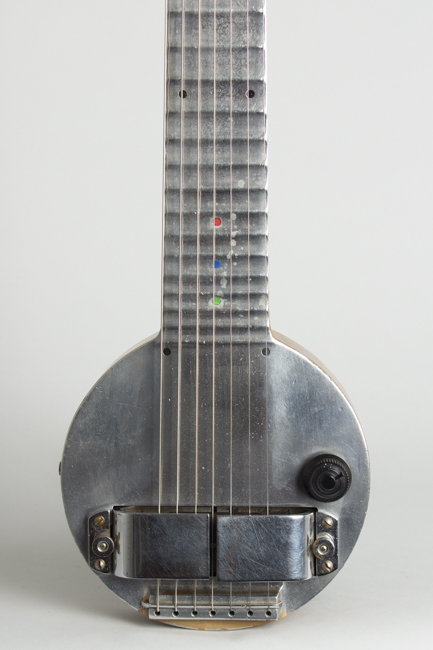 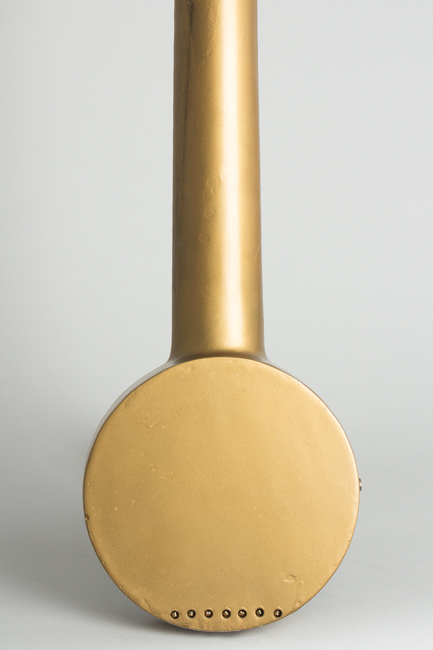 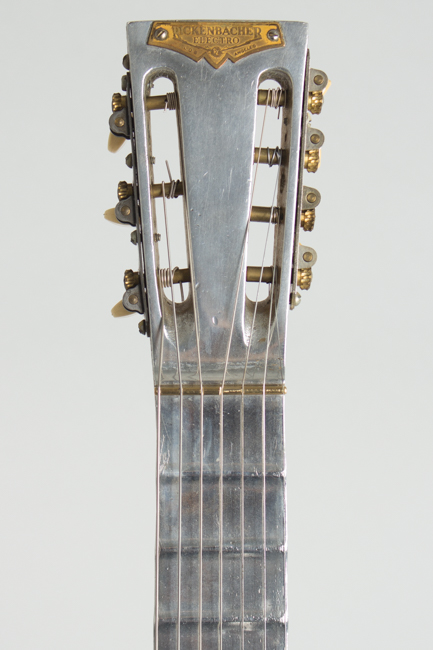 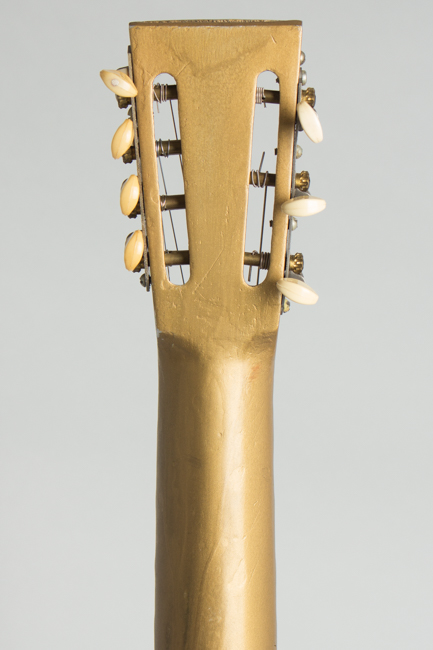 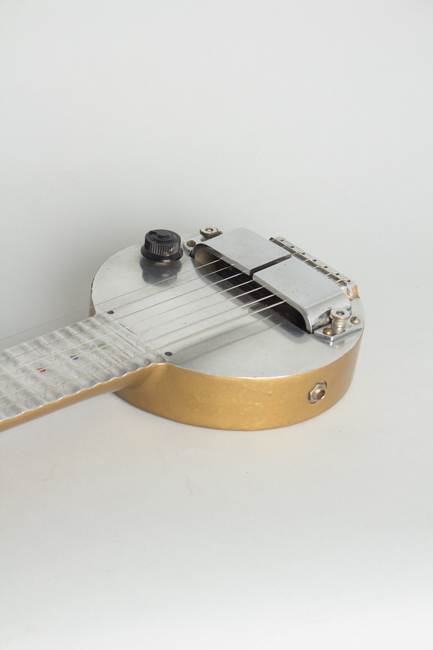 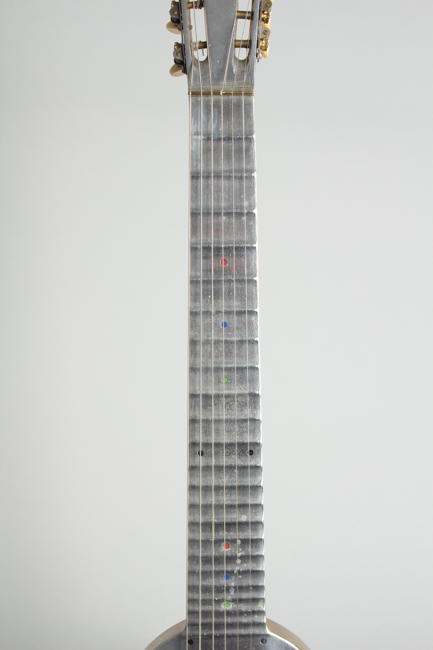 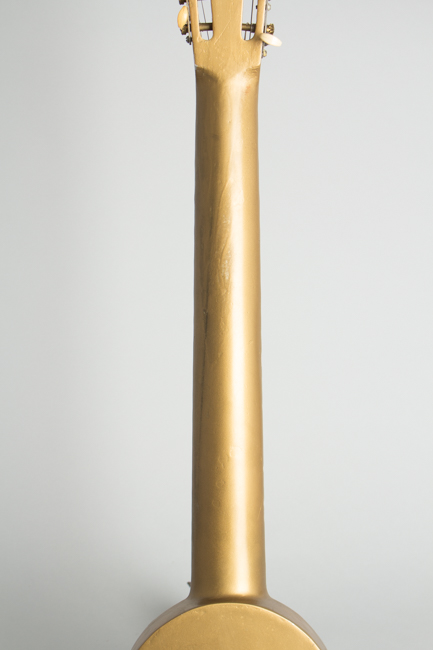 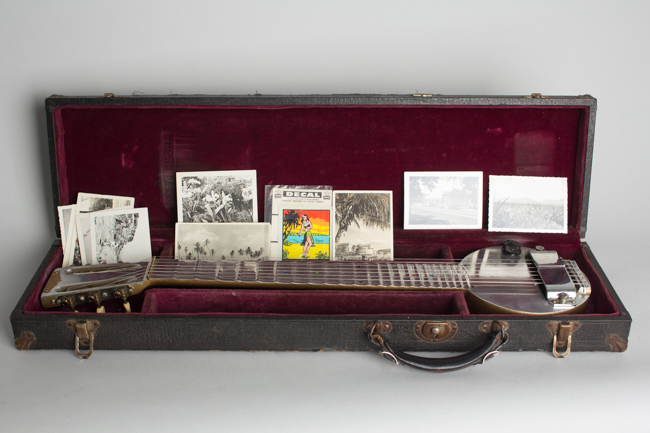 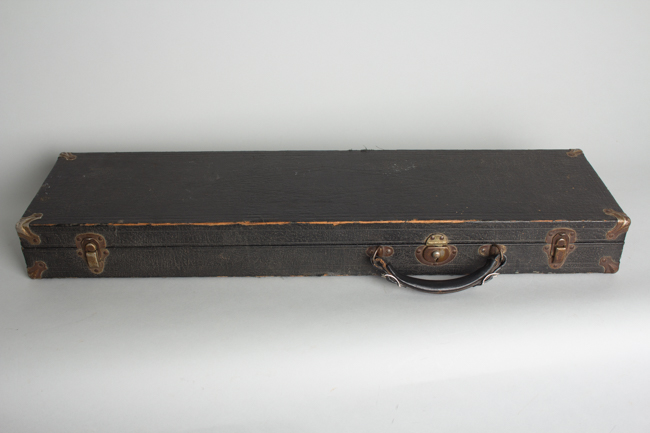 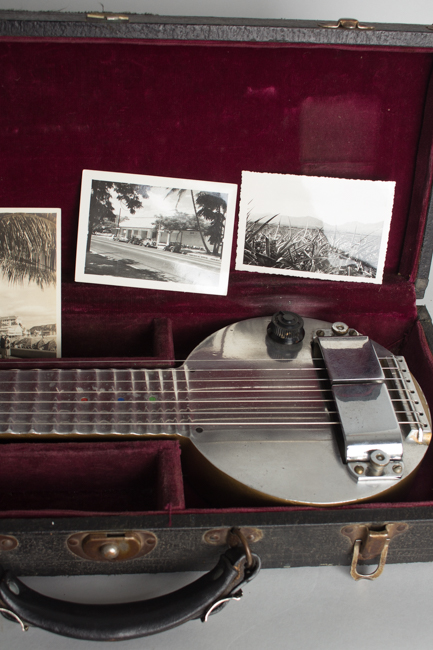 The Rickenbacker A-22 Electro Hawaiian Guitar, nicknamed the "Frying Pan" for its distinctive shape, is simply one of the most historically important of all 20th century guitars. This design was the first commercially successful electrified string instrument as well as the first solid-body guitar. It was the initial carrier of the celebrated pre-war 1 1/2 inch horseshoe magnet pickup, the first electro-magnetic instrument pickup to be perfected and still one of the greatest-sounding units ever. While Rickenbacker went on to produce many other instrument designs, the "Frying Pan" is where it all began for both this California company and electric guitars in general.

This is a very rare and early 7-string A-22 model, a much rarer instrument than the already scarce 6-string version. This stringing was offered as a catalog option, but comparatively few of these were actually produced. The very first few Electros from 1932-3 have no onboard controls; this example has a single volume pot and unmarked pickup flanges, which combined with the early serial number stamped on the top of the headstock indicate it was likely originally sold in 1934.

The fingerboard is integral with the neck with raised ridges for frets and green, red, blue, and black inlayed dot markers. The entire instrument is extremely futuristic for the 1930s, a high deco minimalist design fabricated from a single piece of cast aluminum. The strings run through the body and over a separate chromed metal saddle, through the horseshoe magnet pickup and on over a brass nut to the slotted headstock.

Although the A-22 was marketed and almost always used as a Hawaiian guitar, the neck is round-backed and with a different set-up this instrument could have been played Spanish style - something designer George Beauchamp alludes to in the original patent application. While there will always be some debate as to who made the "Absolute First" electric guitar, the introduction of the Rickenbacker Electro established a market for the amplified instruments, and the company dominated it in these first years. Inventor George Beauchamp's electro-magnetic stringed instrument pickup was by far the best sounding and most successful of the early designs and set the basic pattern form all that have come since.

The A-22 remains unique, in some ways as modern as when it was first introduced and certainly one of the most distinctive guitars ever designed. This example has been fairly heavily used and has seen some work over 85 years but still sounds fantastic, a lovely player's instrument and a rare treat for the 7-string steel enthusiast.

This instrument has had a decent amount of work done over the years, it was likely a working player's steel for some time. It is not completely original but still performs as intended, and looks mighty cool in the bargain! The back and sides have been overfinished in gold paint; it is not a professional job but looks decent enough, certainly so from the audience! It appears at least some of the original gold-washed enamel finish is intact underneath but we really can't be sure, so have left it as is. The top is in natural aluminum; there is general wear over much of the surface, but the overall appearance remains quite attractive.

The coil of the original horseshoe pickup appears to have been rewound a long time ago but still sounds great; this looks like it was done decades ago. The magnets, coil form, and mounting flanges remain original. The single volume knob is fitted with an on/off pot, another old modification. The headstock carries somewhat mismatched 1950s era tuners that appear to have been there for a long time, mounted with somewhat oversize screws. These re-works and part substitutions were likely done long ago to keep the instrument in service when it was nearly impossible to locate another! The brass nut has been replaced; the saddle has survived intact as has the "Rickenbacher Electro" logo plate on the headstock.

The original rectangular hard case has remained in surprisingly good condition, still perfectly serviceable, and carries some old Hawaiian memorabilia as well as the guitar. The "Frying Pan" A-22 and its long scale sister the A-25 are quite scarce today; the 7-string variation particularly so. According to legend, at least, many were melted down in the 1940s to reclaim valuable aluminum for the war production market. While perhaps not in "collectible" condition, this A-22 is still one of the finest lap steel guitars in creation. A treat to play or just to hear. Aloha! Overall Very Good Condition.
×