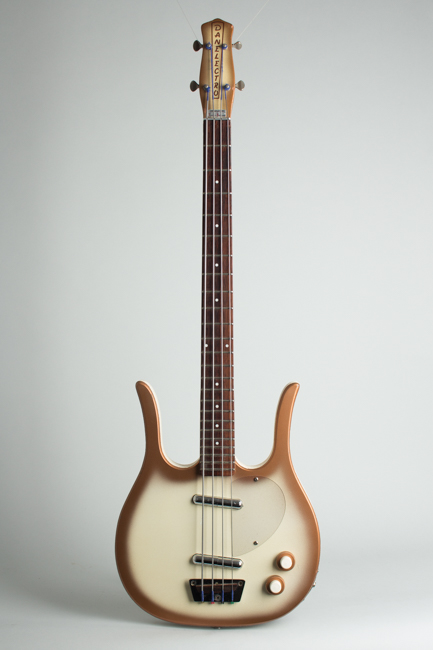 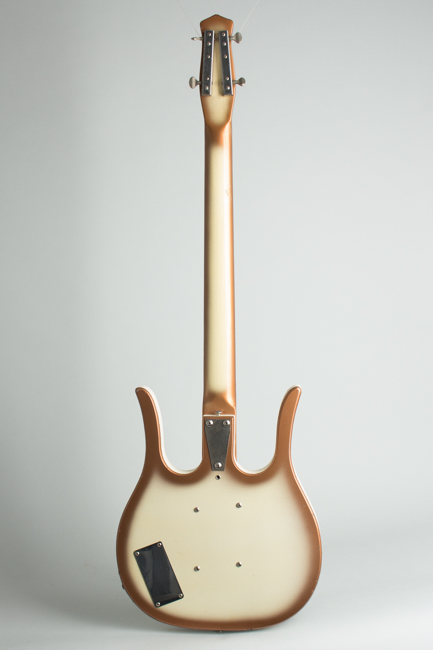 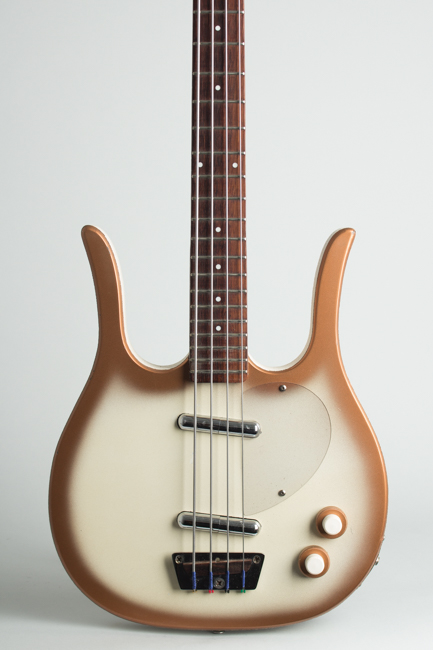 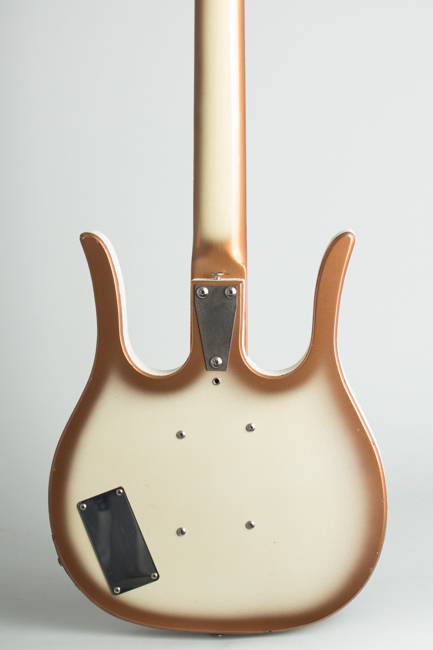 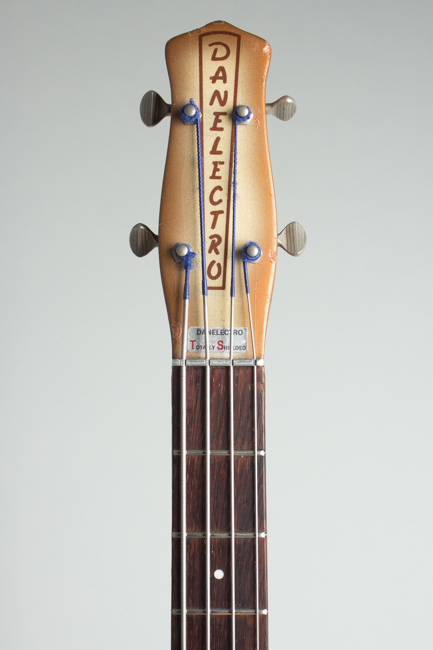 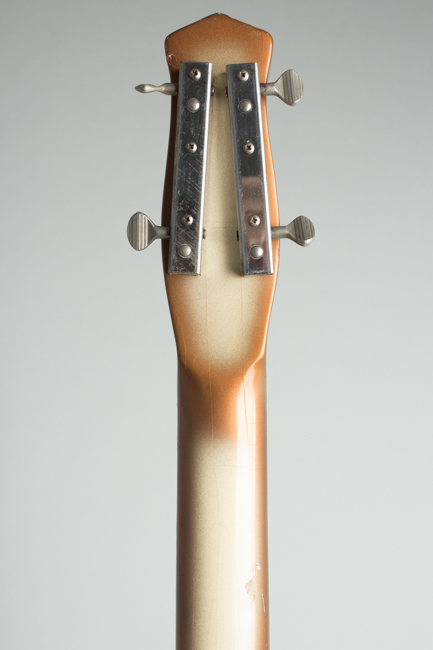 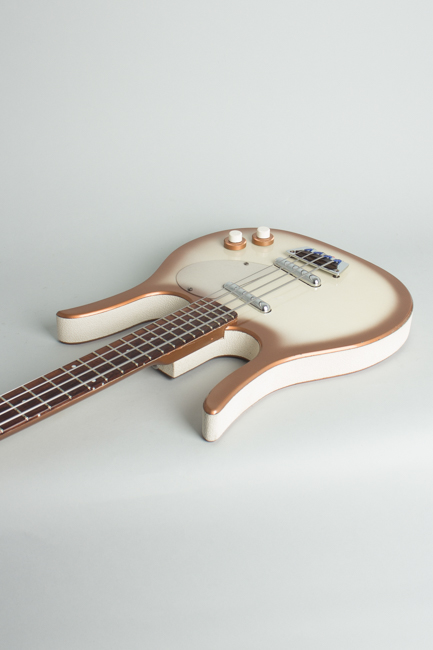 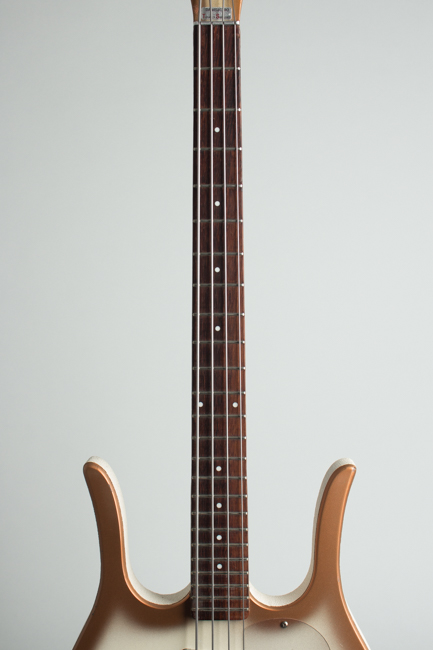 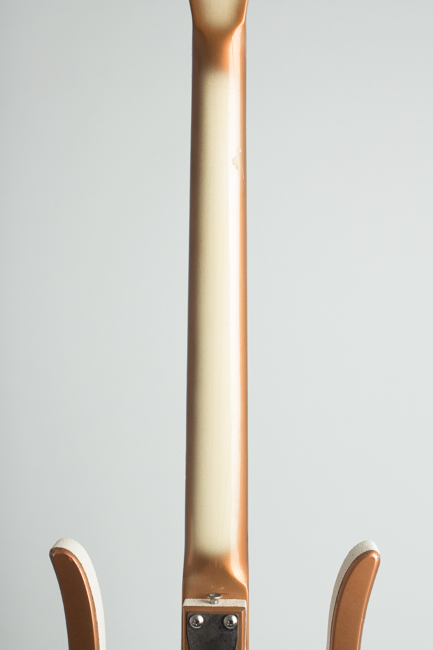 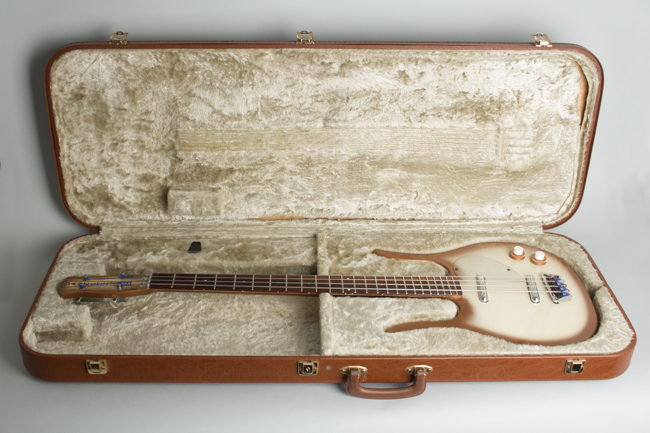 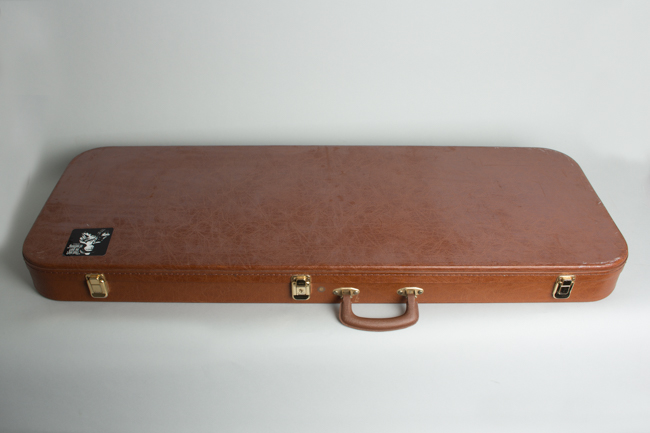 The Danelectro Longhorn Model 4423 remains simply one of the coolest bass guitars ever designed! This absolutely distinctive model was introduced in 1958 alongside a matching 6-string bass and guitar. After a quick re-location of the treble pickup in 1959 the line survived through the 1960's with only minor alterations. The unique bronze/white sunburst finish was the only color scheme offered, a trademark of this model.

Listed at $150.00, the Longhorns were Danelectro's most expensive bass instrument up into the late 60's. Despite being one of the New Jersey company's best-remembered creations, they are actually fairly rare, heavily outsold by the "Standard" models (called "shorthorns" in retrospect) that retailed around $50.00 less. It seems most Danelectro users were budget conscious even then!

Then and now, the Longhorn bass is a delight to play. The deep-cutaway body size and shape is identical on all three models, the basses having a longer 29 1/2" scale neck with 24 frets. The small, light semi-hollow bass is extremely handy and the two Danelectro "lipstick tube" pickups produce a bright and punchy sound. With the short-scale neck set deep into the body and the bridge near the bottom end the instrument is very compact, no longer than many guitars.

These basses have an eccentric wiring scheme with dual concentric pots. The upper shaft carries as an on/off knob for each pickup with a volume knob beneath. The tone is pre-set with capacitors accentuating bass and treble response wired to each pot. The tone is altered by blending the pickups. In practice many found this system confusing or unreliable and most surviving examples have been modified; The 4-string longhorn Jack Bruce used to record DISREALI GEARS in New York during 1967 had already been re-wired by Dan Armstrong! This instrument has original electronics and does not appear to have been altered at all.

This particular bass is a very late example. Ink stamp on the neck heel and pocket indicates it was fabricated the 51st week of 1966, when VERY few of these were being sold. Later features include a Coral-style neck plate with the "tilt-neck" adjustment, 4-screw control plate, in-house "Skate key" tuners and upper knobs on the split-shaft pots that are the same pieces used on Silvertone amp-in-case guitars in place of the earlier fussy-to-make wooden flippers. The bridge is the ubiquitous Dann-O metal plate adjustable for height with a sliding rosewood saddle.

The most famous Longhorn bass legend concerns the Who's John Entwistle. In 1965 he bought a newly-imported Longhorn in London; some instruments had been brought to the UK but apparently not the unique thin-gauge wirewound Danelectro strings. Every time Entwistle broke a string, he had to buy a new bass as replacements were not available! The demos for the Who's iconic "My Generation" single feature the Danelectro; the actual record was made with a Fender Jazz bass as these were no more Longhorns available in London by the time the master session arrived! When the Traveling Wilburys posed with their coolest guitars in the 1980's, erstwhile bassist Tom Petty selected a Longhorn. We are always pleased to offer a nice example of one of our favorite bass instruments.

This is a nice clean 1960s Longhorn overall, showing some play time but not heavily used over the last 50+ years. The only alteration to the instrument is the neck finish only has been oversprayed, a very close match to the original that has to be examined closely to really be noticeable. There do not appear to be any major repairs associated with this work, perhaps there was a small separation under the fingerboard by the nut but nothing is really visible.

There some finish checking and chipping, primarily on the neck and particularly the headstock edges which have a number of small chips and dings to the undercoat. There is one noticeable ding in the back of the neck behind the third fret. If not for this, there would be only small finish chips, scratches and dings on this very well-kept bass. The hardware shows some minimal scuffing and wear as well, but really it looks like this bass is still waiting to be seriously played.

This is also a fine player with hardly any fret wear and a nice straight neck. It remains essentially as God and Nathan Daniel intended when it left the Neptune loading dock (Neptune, New Jersey that is). This Longhorn is simply as cool as they come; its sparkling white-bronze appliance burst looks on first glance like a re-issue. Not so! This is THE genuine 1960s American Masonite and poplar here, a proud product of Nathan Daniels' offbeat genius. It is housed in a Tolex-covered HSC that fits perfectly; this looks like those issued with the Hondo copies in the late '70's but is actually more functional than the original ones. Overall Excellent - Condition.
×