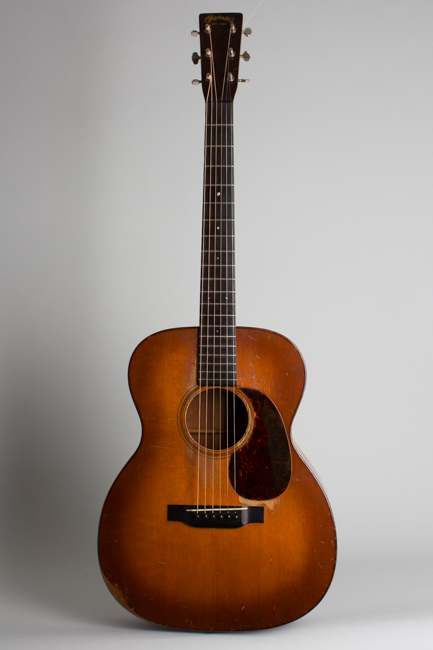 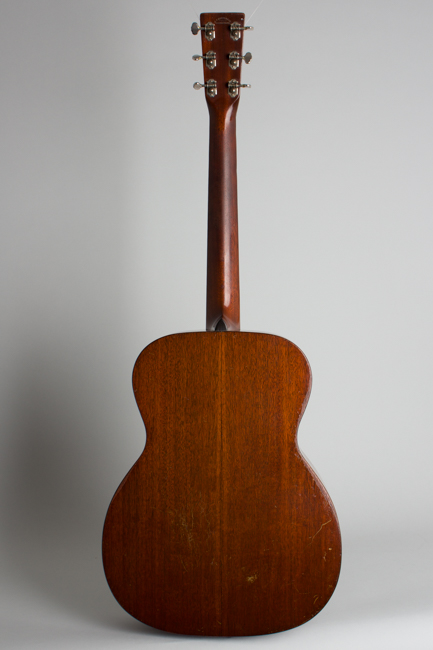 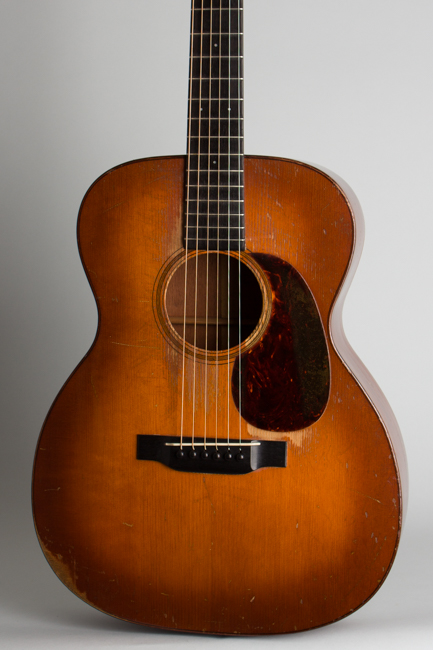 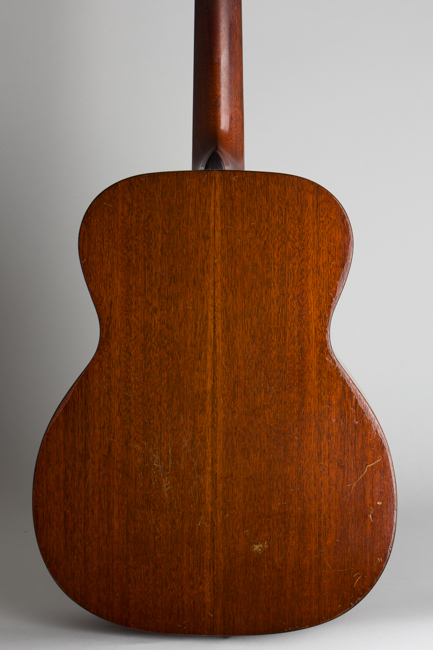 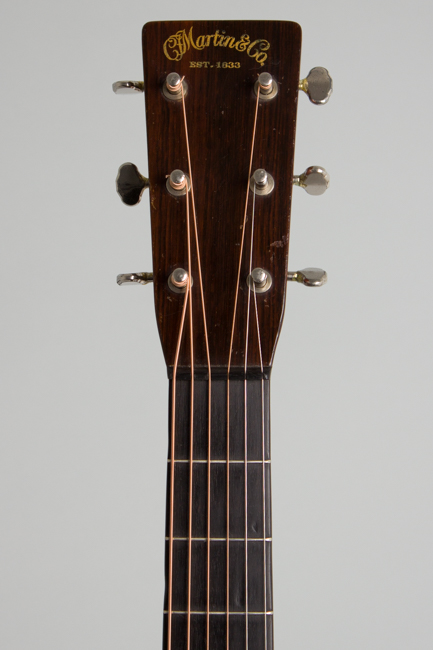 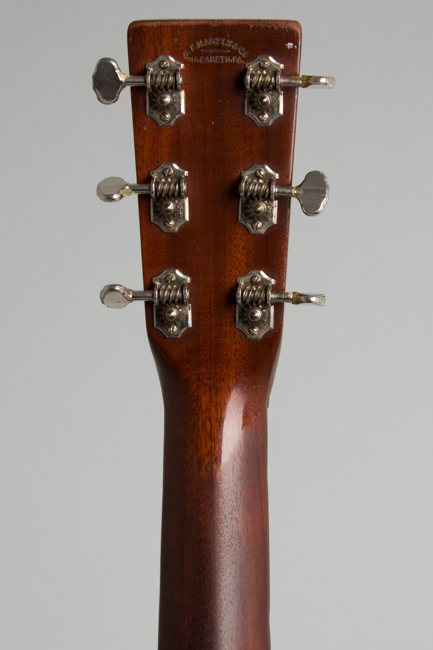 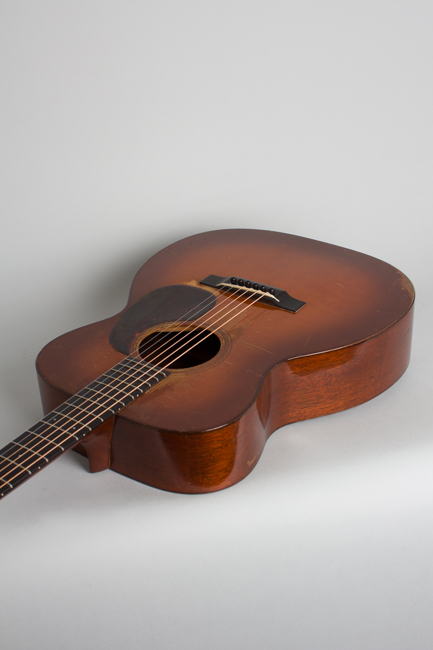 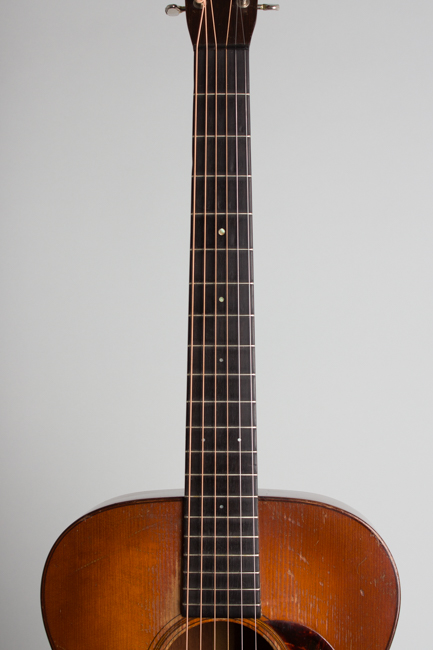 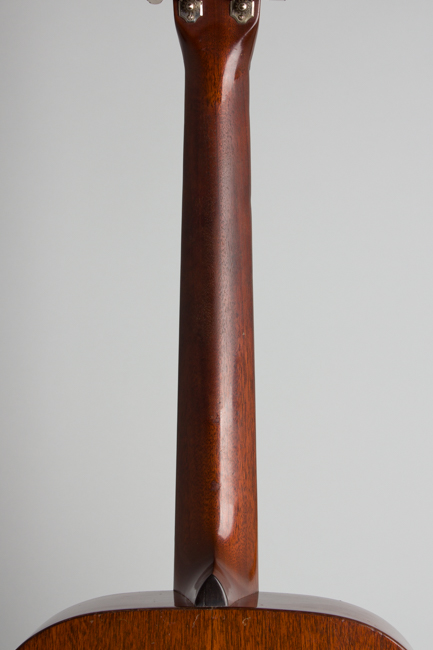 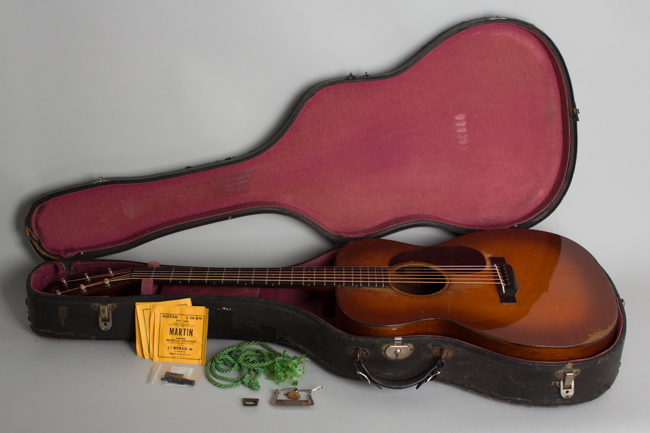 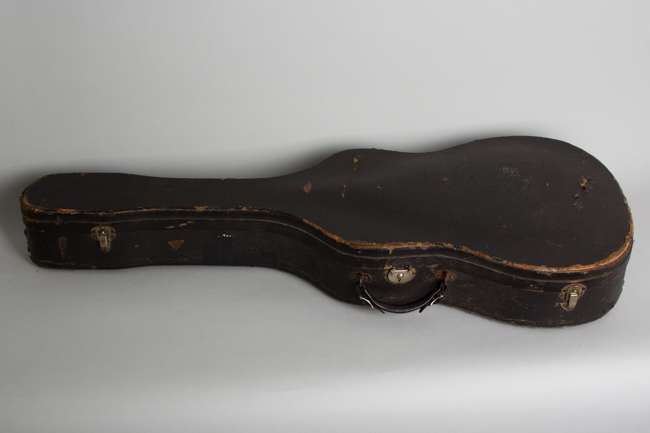 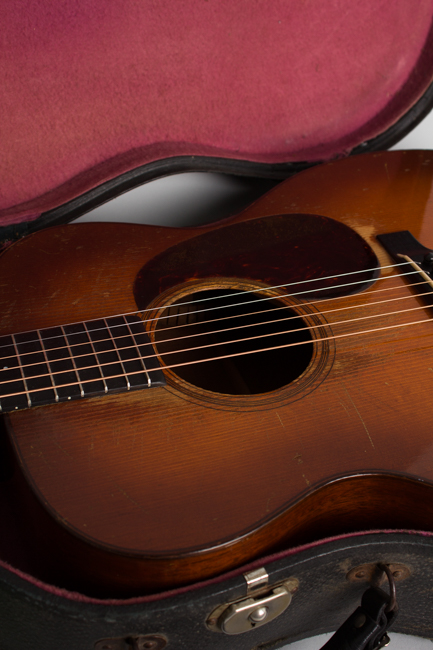 This guitar is one of the true delights of Martin history: an early OM-18 finished in the very rare "Shade top" option. While Martin guitars were traditionally finished to show off the natural spruce top, the success other makers (especially Gibson) were having with sunburst-finished instruments prompted the company to offer what they termed a "shaded" top. This was made standard on its new archtop instruments in 1931 and on flat tops as a catalog option. In practice it was rarely ordered, and these "shaded" Martin flat tops (the company never used "sunburst") have become a much sought after rarity in the decades since.

The OM-18 itself is one of the most iconic of all Martin guitars; along with its rosewood sibling the OM-28 it represents the first full flowering of the "Modern" American steel-string flat top guitar. The combination of the 14-fret neck on a 000 sized body with a long scale created a new paradigm of flat top guitar construction that has been revered ever since. This Om-18 has a slightly wider nut (just under 1 3/4") and the "advanced" scalloped X-bracing on the top that are hallmarks of the original OM models.

This 14-fret 000-sized design was introduced as the OM-28 at the end of 1929 with a rosewood body. The less expensive mahogany-bodied OM-18 was launched in early 1930 and proved an immediate success, though the growing depression stifled sales of all instruments. The design was so well received that after 1933 nearly all Martin guitars were being built in this new "Orchestra Model" format. The OM-18 designation was dropped and the 14-fret model simply called the 000-18, one of the company's mainstays ever since. Martin made an important change soon after by shortening the scale length, leaving the original 1930-33 OM-18 to become one of the most sought-after of all mahogany Martins.

In one of those great fretted ironies the OM models were described in Martin's catalog as "designed for plectrum playing in orchestra work" but they have since become renowned as the greatest solo fingerstyle guitar ever built. Archtop guitars ended up ruling the "orchestra" roost, but OM's quickly became popular with cowboy, recording and radio entertainers requiring a powerful but well-defined flat top sound. Since the early 1930's the OM-18 and its rosewood sibling the OM-28 have been justly celebrated as one of Martin's crowning achievements, and among the greatest flat tops ever created.

This guitar has features specific to the time. The original tuners are first-generation Grovers G-98 single openback units with riveted gears and "butterbean" buttons. Earlier OM's had banjo pegs that proved a major disappointment in use; the single-unit guitar tuners were a big improvement, both lighter and more accurate in use. This early 1932 guitar still has the first silk screened gold "C.F.Martin" headstock logo replaced not too long after with a decal. The top has a very subtle blended finish shading to a rich transparent brown on the outside; later versions tend to be both darker and less finely executed.

This OM-18's light mahogany construction coupled with the longer scale neck make for a powerful sounding, transparent but warm and superbly responsive guitar. The 15" wide narrow-waisted body with a light, scallop-braced top contributes both depth and clarity to the sound. Martin produced all of 225 OM-18's in 1932, the great majority with the standard natural finish tops. The guitar cost 450 in 1932, down from $60 the year before showing that even Martin had to make guitars affordable as possible in 1931, the Depression's hardest year. While the exact ratio is unknown, the "Shade top" option was only rarely ordered on these already rare instruments. This OM-18 is a major Martin rarity and beyond that simply a superb instrument to play, and to hear.

This guitar has been well used over the decades and shows some typical wear and repair but remains a wonderful-playing and spectacular-sounding instrument, a real testament to the enduring quality of these genuine "Golden Age" Martins. The finish has dings, dents and scrapes overall with some typical play wear to the top. There is picking wear into the wood in several spots; above the fingerboard, in front of the pickguard, around the soundhole rim and under the strings behind it. The deepest spot is off the rear edge of the pickguard, in a fairly tight area in front of the bridge. There is some finish worn down on celluloid pickguard.

The top and back are delightfully crack free, which is rare on a well-used OM from this period. The lower side has several tight mahogany grain cracks well sealed with some light touch up and polishing out to that area; this is the only place there is any added finish on the instrument. The longest of these runs from near the tailblock through to the waist area, with a couple of smaller splits running parallel in spots. The upper side has several much smaller grain splits as well, also well sealed. It is possible that these areas were the result of rough handling generations ago in the original case, which is solid but not a heavy duty piece. At any rate none of this relatively minor repair work causes any playing or sonic issues.

The back of the neck is worn down to the wood over much of its length but has very little in the way of dings and dents into the mahogany, with none of the heavy capo wear often encountered. There is a feelable worn spot into the bass side edge adjacent to the third fret. The original bar frets are in surprisingly good condition, likely worked on at some point but with no noticeable signs and playing extremely well. The original ebony nut is still intact. The tuners are original and undisturbed, there is some wear to the screened gold "C.F.Martin" headstock logo.

The original bridge and bridgeplate are nicely preserved, internally the guitar is quite clean. Even the bone saddle appears original, or at least an excellent aged reproduction. The elegant scalloping on the bracework is simply beautiful to behold, and demonstrates once again the incredibly high standards Martin's craftsmen maintained in this era, a very difficult period for the company. At the time this OM was a distinctly modern guitar design, but still built with the exemplary craftsmanship that Martin's 19th century traditions engendered.

The original hardshell case is included; it is fairly well worn and all the hinges have been repaired in a solid but not period style. Inside are some mementos of the guitar's past life; old yellow Martin string packets, a green tassel cord strap, an ancient cork capo and two old Xeroxed pictures showing the original owner posed in a cowboy group, one appearing to be with this guitar. This instrument is both a fabulous piece of history and an exceptionally fine player's instrument nearly 90 years on. Overall Very Good + Condition.
×