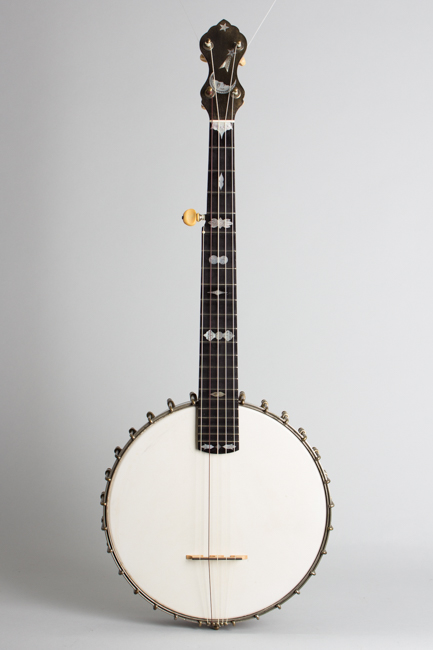 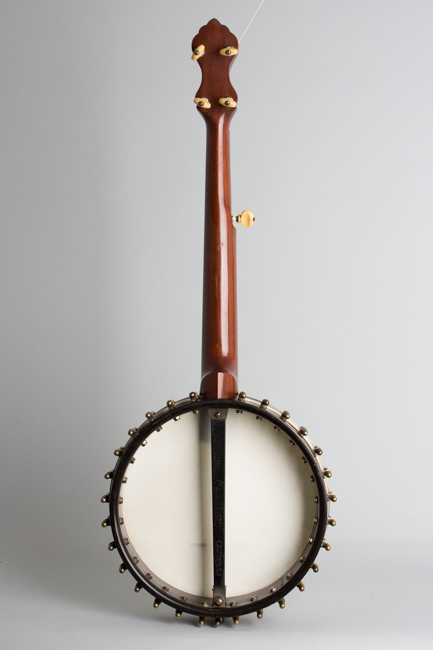 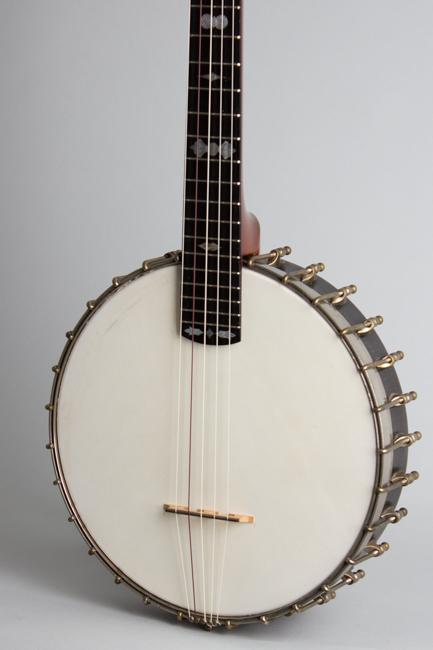 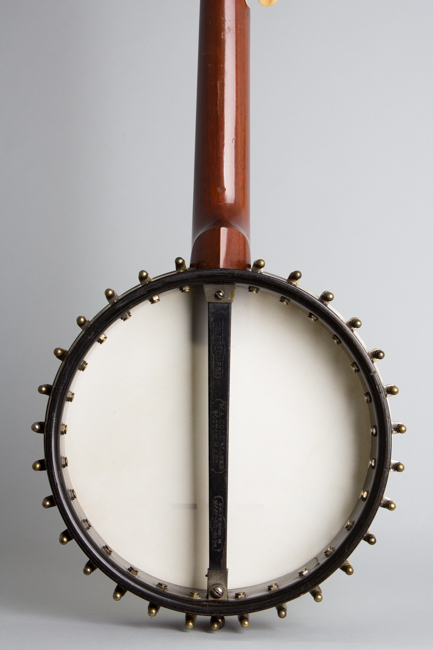 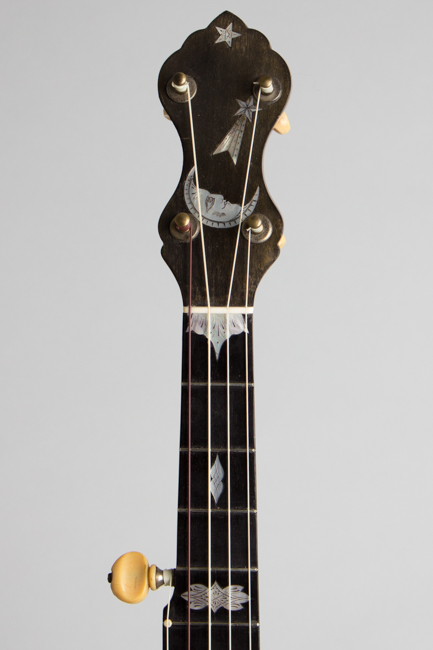 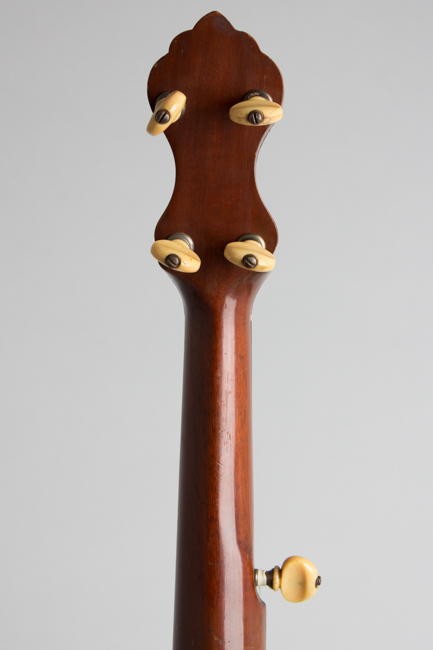 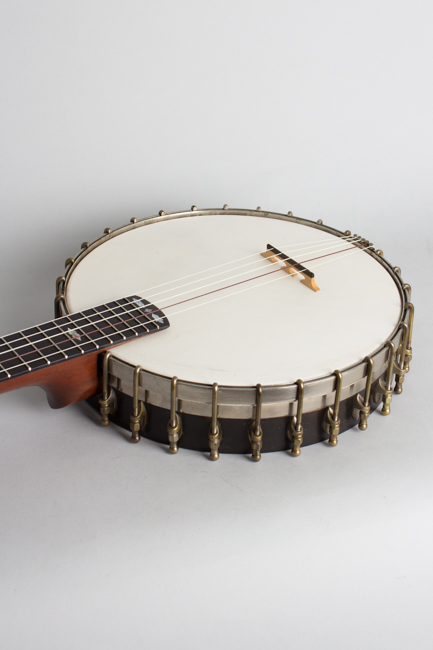 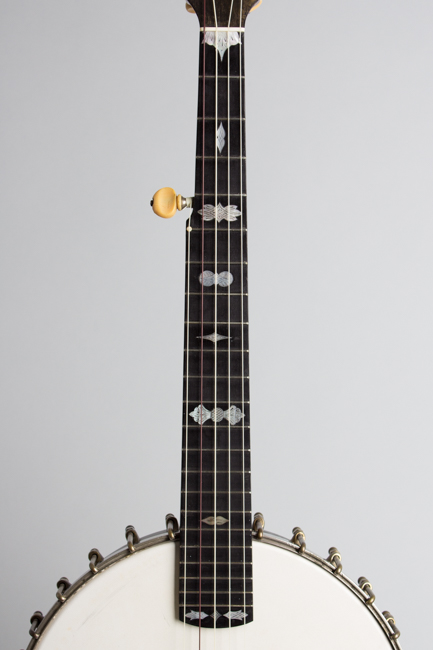 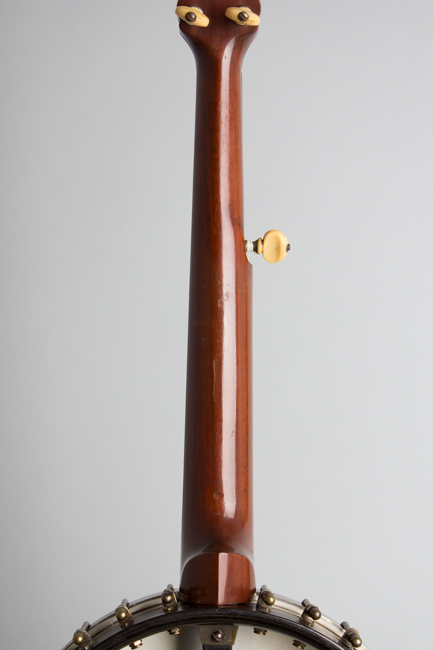 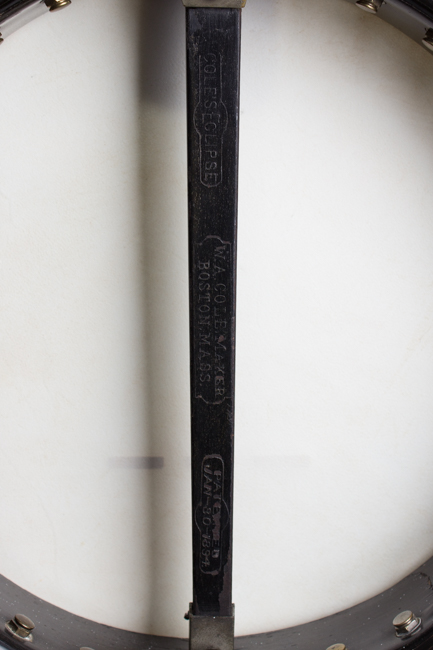 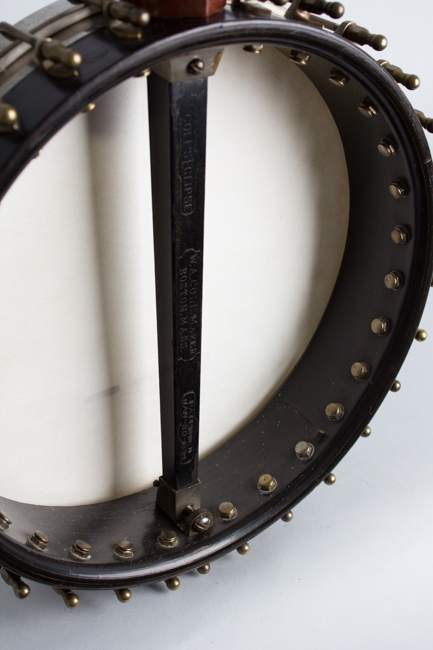 This elegant little banjo is a lovely original example of a fairly rare 5-string oddity -- a Cole's Eclipse Banjeurine with the ever-popular Man-in-the-Moon inlay. This is one of the absolute classic banjos of the late 19th Century, and short-neck Banjeurine versions of this model are especially scarce.

Not often played or even seen today, Banjeurines in general are considerably rarer than their full-scale banjo siblings especially in the higher grades. They were meant to be tuned to a higher pitch to play melody parts in the large banjo ensembles of the 1890s, while retaining the mellower tone of a more-or-less full-size head. This one has a 10 1/2" rim, so is on the smaller size of the standard Eclipse pots. By the early 1900s these instruments were already considered rather anachronistic and rarely made compared to their full-scale cousins.

The dowel on this instrument is marked Cole's Eclipse, W.A. Cole, maker, Boston Mass with the January 1894 patent date. It shows no discernable serial number stamp on the dowel (and yes we've looked on the top of the stick as well as the sides!) but the features would seem to indicate a fairly early Eclipse model with a build date between 1895 and 1900.

Cole's Eclipse banjos are beautifully made and have many distinctive design and construction features. The elegantly shaped "Boat Heel" neck is a trademark, as are the screw-threaded dowel stick adjustor, uniquely stylish "teardrop" shoes, and the simple but effective Eclipse tone ring. The unique delicately engraved shaped pearl fingerboard and headstock inlays are a particularly lovely feature, with the "Man-in-the-Moon" on the headstock regarded as an iconic banjo trademark. Aside from its considerable historic interest, the instrument has a beautiful sound with Nylgut strings and is one of the loveliest 5-strings we have had in a while.

This instrument is in fine cosmetic and playing condition, especially considering it is likely at least 120 years old. The thin black varnish finish on the rim and natural varnish on the neck show light general wear with some dings, dents and scrapes overall. The beautifully hand engraved pearl inlay on the face of the headstock and the fingerboard is still solidly intact and very crisp. The hardware is original and complete including the original 1895 patent style Elite tailpiece without the lower posts. The tone ring sheath and hoop retain most of their plating, while much of the very thin nickel plate on the hooks, nuts and tailpiece is worn down to a lovely muted brass patina.

The instrument appears to have been refretted with appropriate narrow wire some time ago, with the bone nut replaced as well. Other than this it remains original, recently set up with a Clifford Essex white calfskin head, a newer bridge and Aquila Nylgut strings. It is very playable and the sound in this mode is lovely; sweet and surprisingly rich for the combination of the 10 1/2" rim and short scale. It could be strung with steel strings as well; the shorter neck would be less problematic in this mode than many other 19th century banjos.

Banjeurine tuning is rather fluid in the 21st century, where the instrument is practically extinct. Originally they were generally tuned one fourth higher than standard banjos, but those banjos were tuned 1 2/2 steps lower than is current at the time. We have this one currently set up in classical A tuning, one step up from Bluegrass G but the Nylgut strings are pretty flexible (literally!) so there are other options! The original case (which would have been canvas or leather) is long gone; this banjo can be supplied in a 3/4 size guitar chipboard case or gig bag as preferred. Overall Excellent - Condition.
×