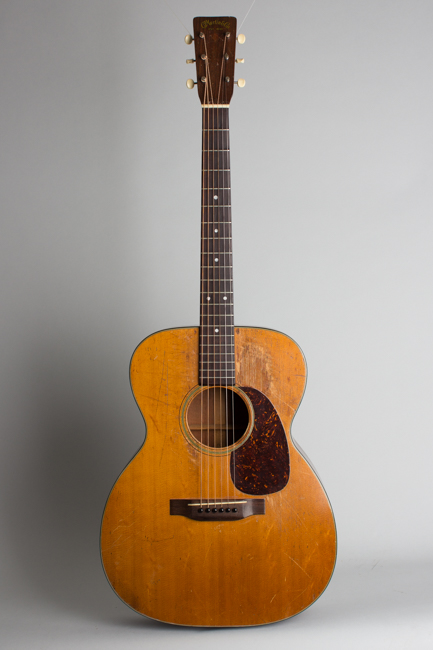 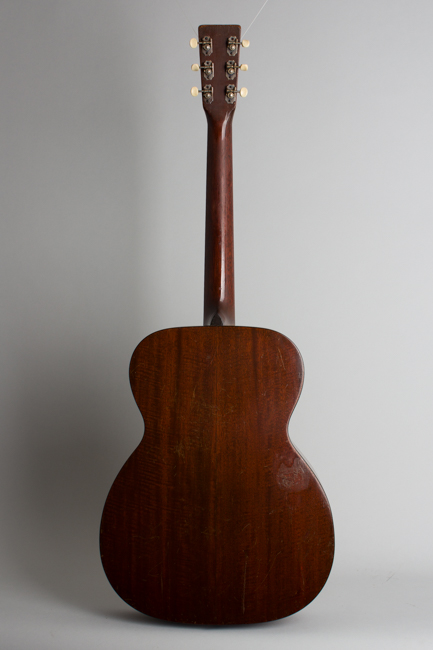 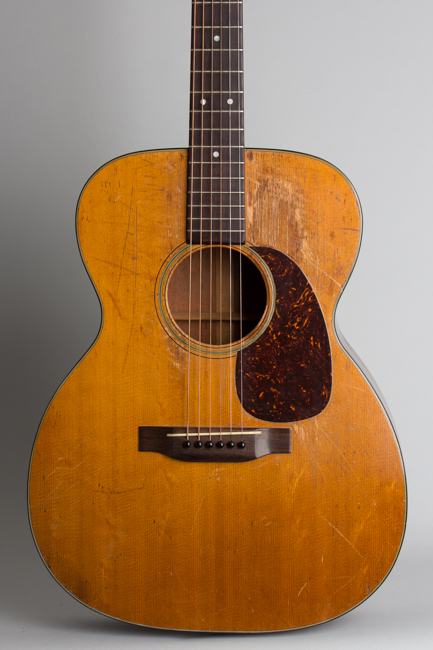 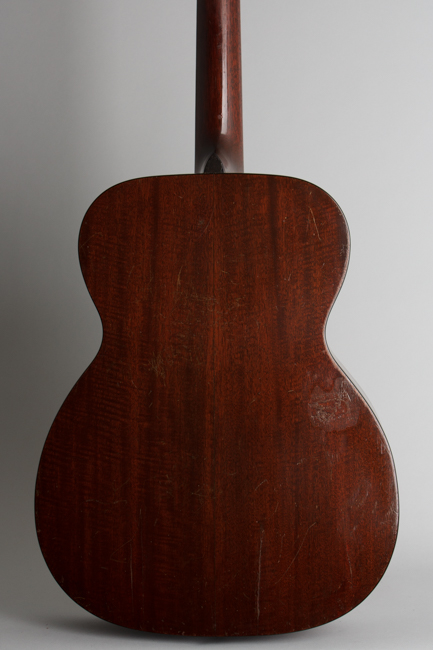 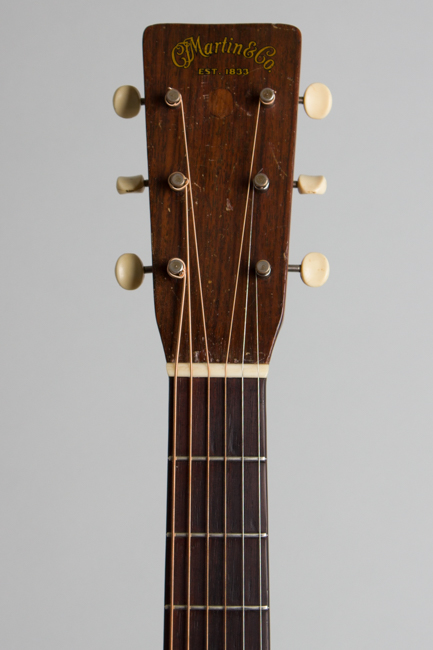 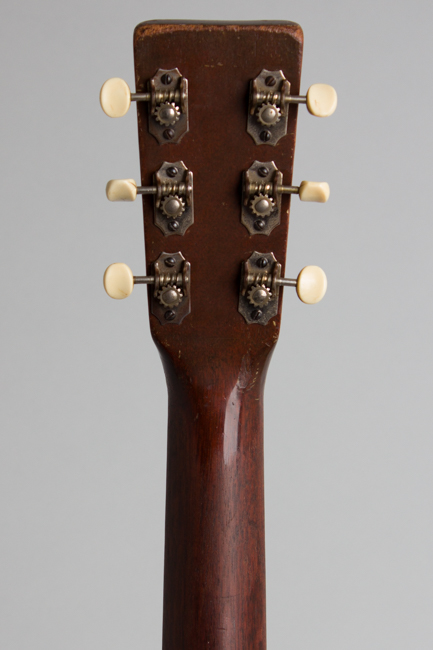 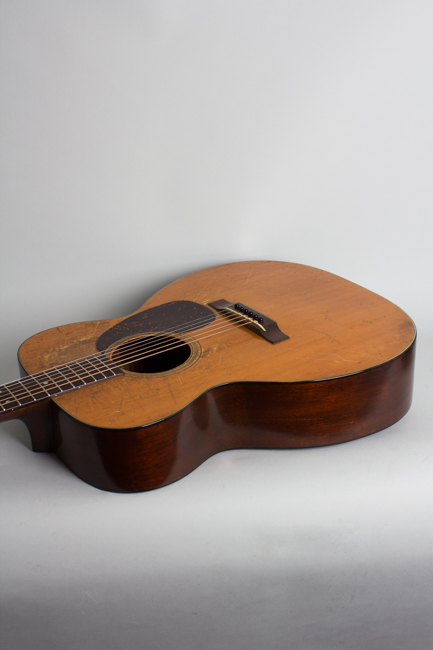 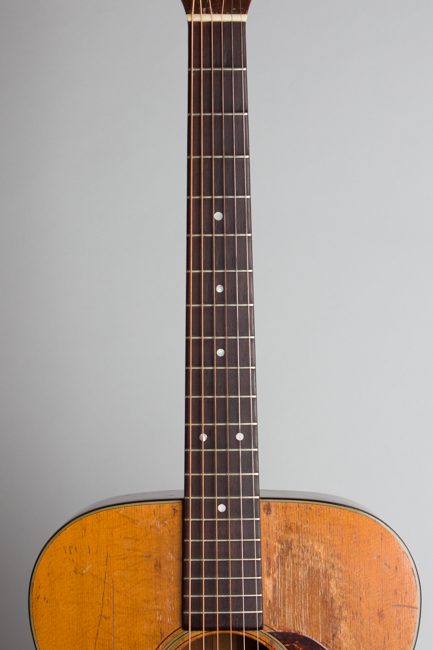 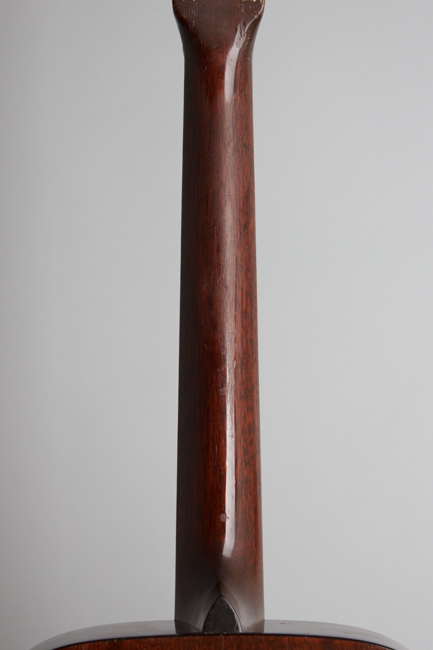 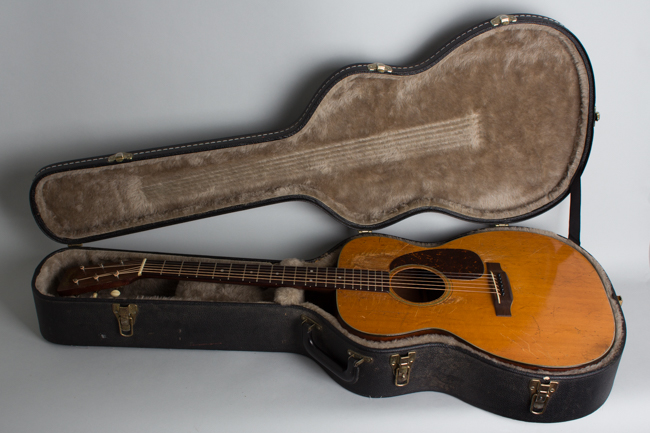 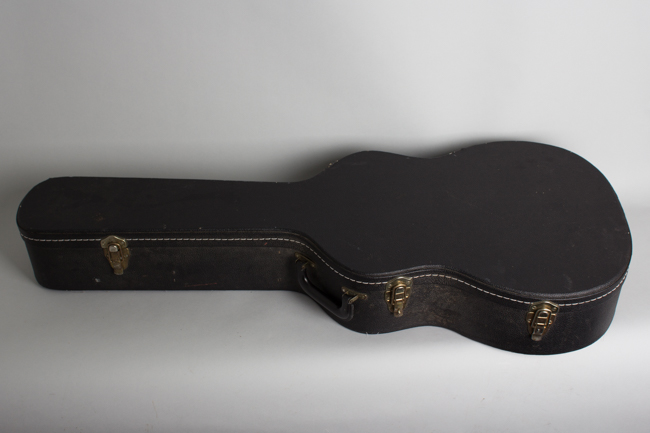 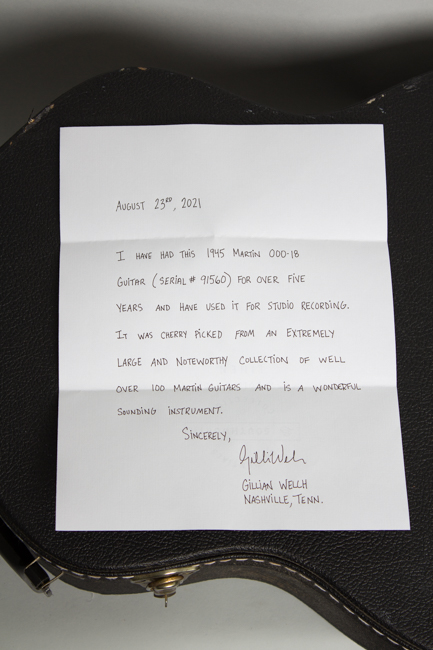 To many players and Martin fans, the 000-18 constitutes one of the company's most propitious combinations of wood, wire, and inspiration. This is a special example, well worn, well traveled and with a very cool pedigree. It has spent some years of late in the hands of Gillian Welch & David Rawlings, and been used on a number of their recordings. This guitar has also seen a lot of use in the decades before, looking to have had a long and likely fruitful existence since first leaving Nazareth in 1945. The very light mahogany body and Adirondack spruce top make for a superbly responsive guitar; the 15" wide narrow-waisted 000-size body contributes both depth and clarity to the sound.

This guitar was built in early-mid 1945, one of exactly 400 000-18s shipped in that last year of WWII. It has a features specific to this exact period, when much was in transition. The superb straight-grained Adirondack spruce top is a left-over from pre-war spec; within a year or so supplies of this wood were no longer available in quantity and Martin began using Sitka spruce instead. The traditional scalloped top bracing had been discontinued in 1944 but this guitar had the braces gently scalloped to that pattern some time after completion, resulting in a unique sonic signature.

The other woods used are mahogany for the neck, back, and sides with a rosewood fingerboard and bridge -- a change from the prewar ebony. The top has a tortoise celluloid pickguard and outside edge of the 5-ply binding, with a single layer for the back. The neck has a fairly slim profile with soft "V" along the spine, typical of wartime models. There is no metal rod but an ebony reinforcement that has stayed straight and true, making this guitar among the lightest 000s out there. The fingerboard inlay is mixed size dots and the original tuners are openback wartime Klusons with no bushings and plastic buttons.

While not a particularly expensive guitar by 1945 standards, listing at $67.00 (plus case) the 000-18 still represented a substantial investment to most era players. By that point of the war professional grade guitars were in short supply, and Martin likely had their hands full building them. The 000-18 is not a flashy guitar; in classic Martin style, the elegant understatement speaks for itself.

This 000 is very versatile; it excels as a fingerpicker's instrument but also has a lot of punch and depth as a rhythm machine as well. Whatever the style of music one might prefer, mahogany flat-top guitars simply don't get a whole lot better than this. It is simply one of the loveliest sounding mahogany 000's we have heard regardless of era, obviously very well-used even before landing in the Welch & Rawlings camp but wearing its lifetime's history with grace.

Overall length is 39 3/4 in. (101 cm.), 15 3/16 in. (38.6 cm.) wide at lower bout, and 4 1/8 in. (10.5 cm.) in depth at side, taken at the end block. Scale length is 24 3/4 in. (629 mm.). Width of nut is 1 11/16 in. (43 mm.).
This guitar remains in fine playable condition in spite of extensive wear, previous repair. Structurally there has been one notable modification: the braces, originally the tapered style of the early post-war era, have been retroactively scalloped in the pre-war manner. The work has been done not too long in the past and to a very professional standard. Structurally the guitar remain fully intact and completely solid. While we don't generally recommend this procedure, in this case it has resulted in a spectacular sounding guitar.

Externally the guitar shows signs of decades of extensive use. The finish has extensive play wear throughout with a large selection of dings, dents, and scrapes. The top shows the heaviest wear including scratches, case lid bites, dings and small dents. There is pickwear on the bass side of the soundhole, around the edges of the soundhole and notably a large area down into the wood on the treble side next to the fingerboard. This has been touched up and then further worn into in the past. The rest of the original finish is still largely intact on the top; there is some topical touch up around the soundhole edge but no wholesale overspray.

The pickguard is a tortoise celluloid replacement in similar pattern to the original, covering a slightly larger footprint. The bridge has been reglued (probably more than once) but it and the thin maple bridgeplate appear original. The nut and the saddle are carefully crafted replacements. The bridge plate has a small ebony cap, covering only the area just around the bridge pin holes, to repair worn out string holes in the bridge plate. There appears to have been a nicely done neck re-set some time back.

The top has only one small tightly sealed grain crack, at the edge of the treble side lower bout. The sides are crack free; there are five grain cracks on the back, all extending from the bottom of the lower bout, all sealed solidly but in some cases not particularly neatly. The back has been touched up in those spots with overspray; around the cracks and in a spot near the bass side waist some overspray has been worn through again.

The headstock has some general wear, particularly at the top back edge. There is an area of worn-away finish on the front face between the D and G string tuner posts where it looks like perhaps some small talisman was glued long ago. The finish is worn through to the wood over much of the neck, but there are no heavy capo marks or deep dings along the surface, only some small dinks. There is a bit of divoting to the fingerboard in the lower positions but the frets have only light wear and the guitar is a very fine player.

This guitar feels superb; light, handy and perfectly played in, simply a wonderful sounding instrument. It is accompanied by a beautifully hand-printed letter from Gillian Welch attesting to her ownership and use of the guitar, and saying it was hand picked for sound from a large collection of vintage Martins. While obviously far from the cleanest of old Martins, this is an absolutely special guitar in other ways. Very Good + Condition.
×