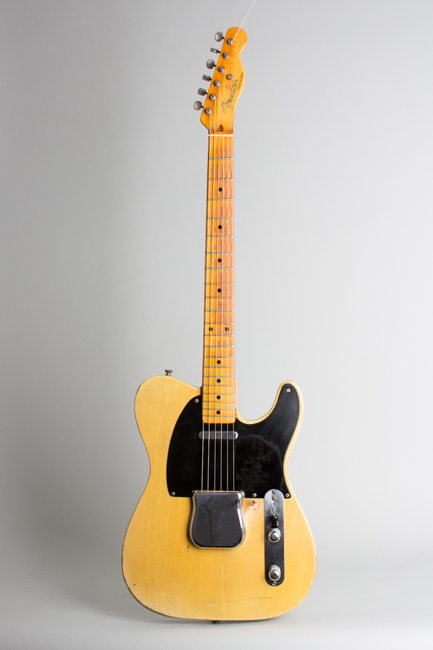 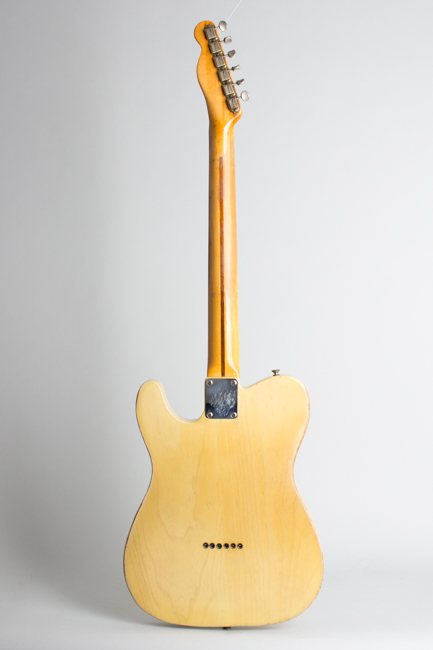 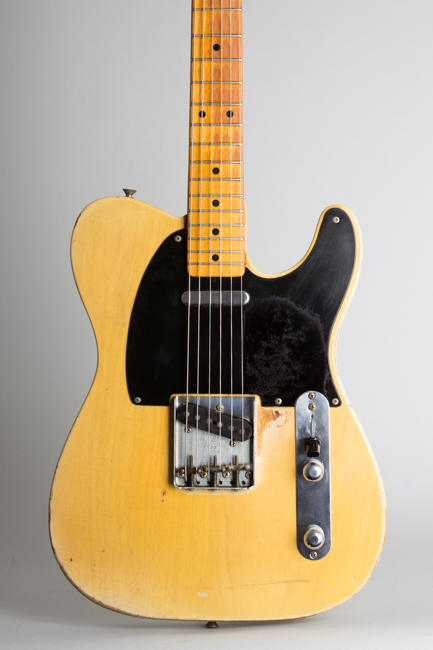 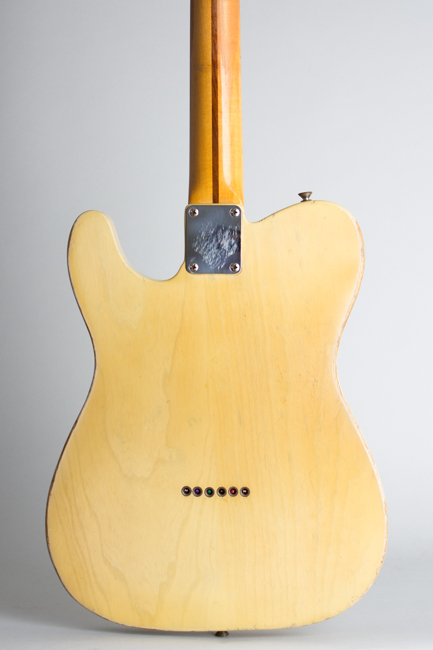 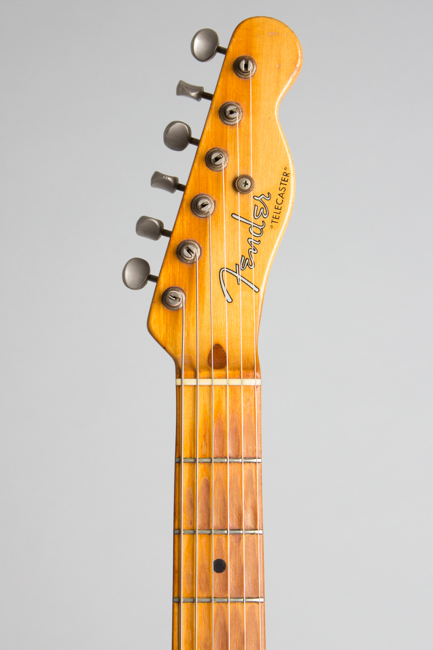 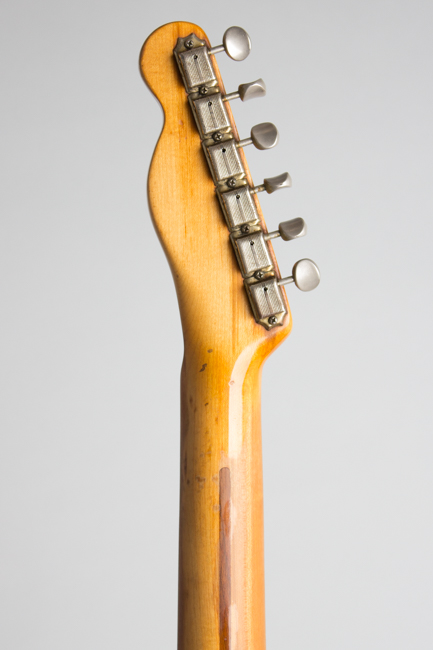 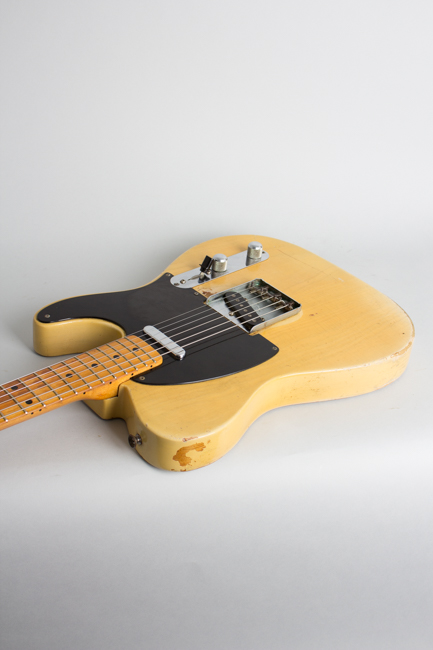 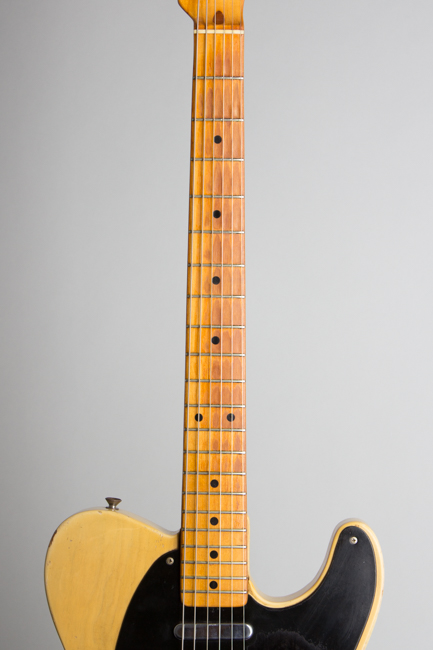 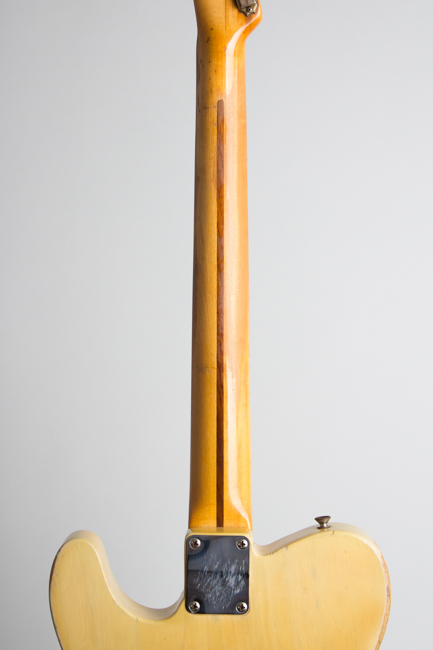 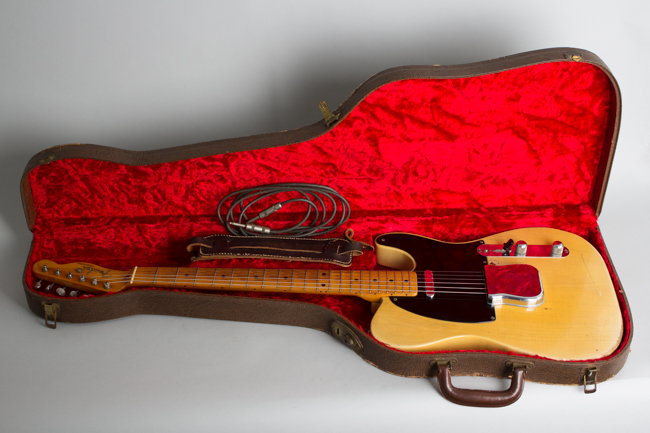 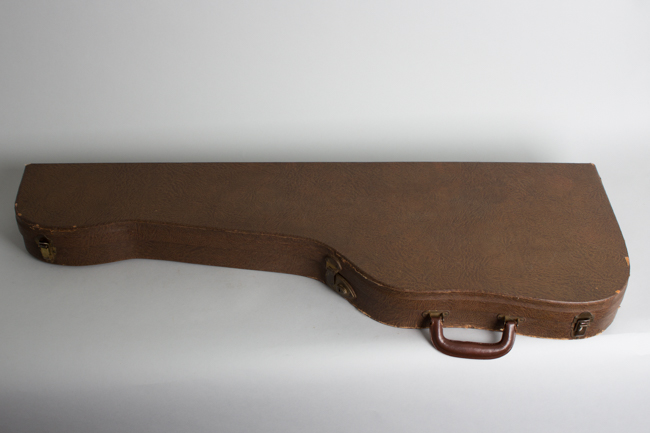 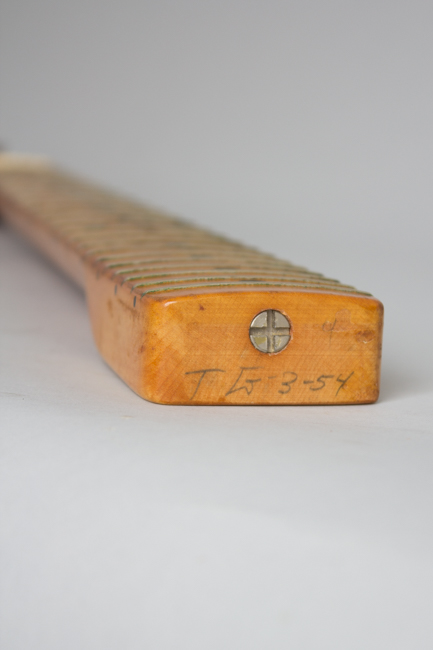 This is a lovely (and well-loved) original example of a "Blackguard" Telecaster -- the guitar that put Leo Fender on the map -- built at the company's original factory in Fullerton, California late in March 1954. That was the final year of the classic "Blackguard" and this guitar retains the epochal '50-54 Tele features: a one-piece maple neck, aged "butterscotch" blonde-finished ash body, lacquered black fiber pickguard and of course the original black-bobbin hand wound pickups with a sound for the ages. The only notable difference from earlier models is the three steel (instead of brass) bridge saddles, one of many changes the Telecaster would go through over the coming years.

This guitar's serial number 2497 is stamped into the bridgeplate, the unit at the heart of the Blackguard Tele. Fender serial numbers in this period are not in cumulative order; many Telecasters and Esquires from this year have numbers in this 2XXX series, which are also common in 1952. The neck heel is marked TG 3-54 in pencil, the initials are the mark of Tadeo Gomez who signed most Fender necks in this period. The body is marked 3-54 in red pencil in the neck cavity, with a circled #1 above. The parts are more closely dated than many early Fenders, showing perhaps a tighter production schedule early in the year. The visible pot date code indicates the 33rd week of 1953; assembler Mary's masking tape signature reading 3-26-54 is still intact, showing exactly when the body was wired up.

This guitar has been played but not abused since it first shipped out of Fullerton probably in mid-1954. The very comfortable neck has a nice "C" profile, slimmer with less of a rounded "throat" in the lower positions than many earlier Telecasters. The screws are nearly all Phillips-head types as is customary for 1954. All parts remain original including the early pattern wiring rig; unlike many, it has never been re-wired to the "modern" Telecaster switching scheme. As originally set up there is a "deep bass" capacitor on the neck pickup in switch position #1; position #2 is the neck pickup in normal mode, and #3 is the bridge pickup with a master tone control. The neck and bridge pickups can be combined by carefully lodging the selector between positions #2 and #3, which works better on this guitar than some we have had.

Before the introduction of the second Fender solid-body (the Stratocaster) in mid/late 1954, the Tele and Precision Bass were the company's most sensational products. This guitar was made shortly before the Strat launch, after which production of the earlier solidbodies seems to have waned as the factory tooled up for the new model. By 1954 Fender products had already begun causing a revolution in playing styles, shaking up the guitar world in a big way. The Telecaster had a totally unique look, feel, and sound, becoming quickly popular with country and blues musicians. In the decades since, many players and collectors have come to consider the "Blackguard" Telecaster the finest electric guitar ever made -- and perhaps the most historically important as well. Early Telecasters are universally considered one of the most desired of all electric guitars, and this is a very nice original example.

The only alteration this guitar has ever seen is some very old light overspray in spots, likely intended to spruce up the long-serving instrument a bit. This was most notable on the fingerboard which is fairly heavily worn to the wood in in the typical fashion. Decades ago someone added some shellac over the wear, much of which has subsequently worn away again. We removed most of what residue remained, but the effect can still be seen in and around the divots with the wood appearing a bit darker than usual.

The original tuners were repeatedly oiled long ago, which leeched into the finish a bit over time. The area around them on the back and upper side of the headstock appears to have some very light overfinish, likely intended to help preserve the lacquer beneath which might otherwise have begun to flake. This is very subtle and not apparent under blacklight but it seems to be the case nonetheless. The back of the neck is rather well-worn with some original finish remaining and large areas down to natural wood, again darkened a bit in spots. The neck has some small dings and dents but feels great and is very comfortable to play.

The frets are still the original small wire, as might be expected they are fairly well worn particularly in the lower positions. If the instrument is to be gigged or played heavily a refret would probably be in order before too long, this can be arranged before delivery if desired. As it is the guitar plays well enough for casual use with no notable buzzes or dead spots.

The thin lacquer finish on the body has ambered with some finely checked areas and shows typical dings, dents, and worn spots -- especially to the edges as usual. There are a couple of larger areas of loss; the most obvious is on the face where the players fingers rubbed finish away below the bridge. This spot has what appears to be a very light topical overfinish as well, again probably intended to protect the finish as it wore and subsequently played through again. The bottom edge of the body has what looks like a similar overfinish, though here we're hard-pressed to say why. There is an area of finish flaked off on the side on the upper bass bout; the rest of the sides do not show any added finish, also true of the bulk of the face. The back may have been polished out somewhat in the center but has escaped the usual heavier belt buckle wear.

All hardware on the instrument remains original, showing some light wear but no modifications. The pickguard has been worn through the lacquer in the typical area below the strings. The bridge saddles and screws have some corrosion and discoloration but nothing is rusted hard and all adjustment screws remain fully functional. Internally the pickups and wiring are all original as Mary assembled them with untouched solder joints and the original switching scheme still intact.

Everything on this instrument other than the minor finish touch-ups is as it left Fullerton in mid-1954, with wear from years of gigging but far less accumulated abuse than many of these now show and none of the modifications that befell way too many of them. These were unique instruments when new, often "played to death," and the majority of survivors have not only been heavily used but commonly modified and now often subject to extensive restoration. Staying with its original owner through the decades, this one may have been lightly "spruced up" a bit long ago but escaped serious modification and remains a truly fantastic feeling and sounding guitar. It is fairly light for a '54 at under 7 LBS and a joy to handle, with a powerful bridge pickup that can roar or twang sweetly as required and a nicely blended "middle" position.

The "ashtray" bridge cover is intact with the correct solder spot underneath, and an original strap and period cord remain in the case pocket. The guitar is still housed in the original shaped hard case with the flat bottom edge, a rarity in itself only used in 1954. This case is about the best preserved of these we have seen, with only some minor wear and fraying. These first generation Fender shaped cases (made by Bulwin) were fairly cheaply constructed (mostly of Masonite) compared to the 1955 and later rectangular ones and many have not survived. Over the last couple of years these early Telecasters have become among the most desired of all vintage guitars, and increasingly hard to find in anything like original condition. This one is not perfect, but remains cleaner and more original than many, a wonderful instrument with a great story. Overall Excellent - Condition.
×