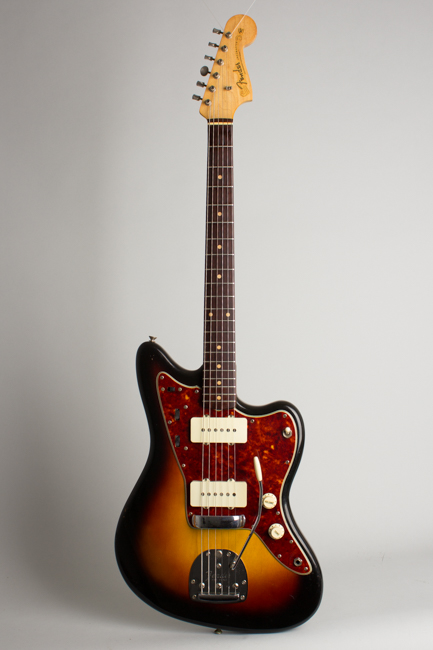 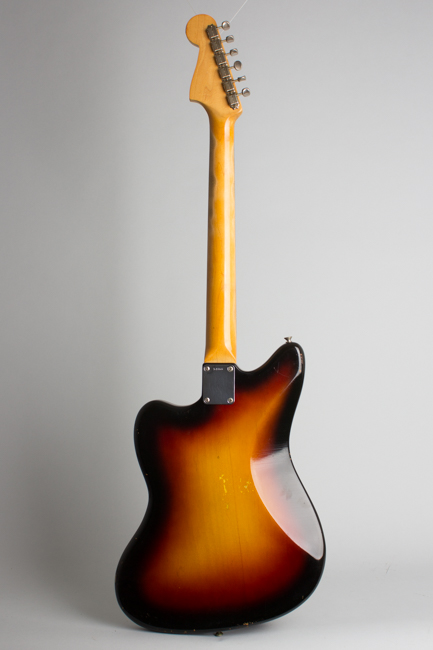 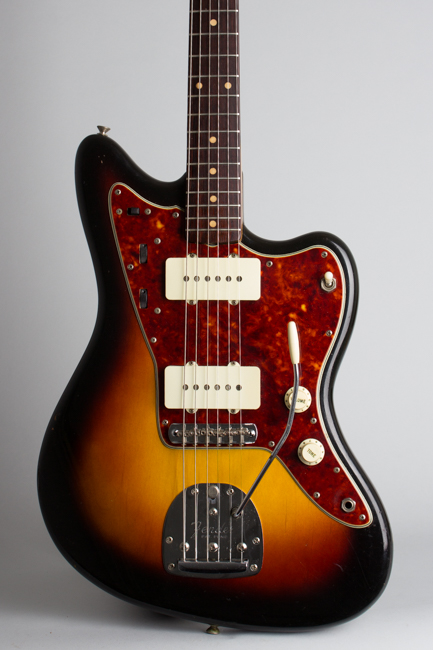 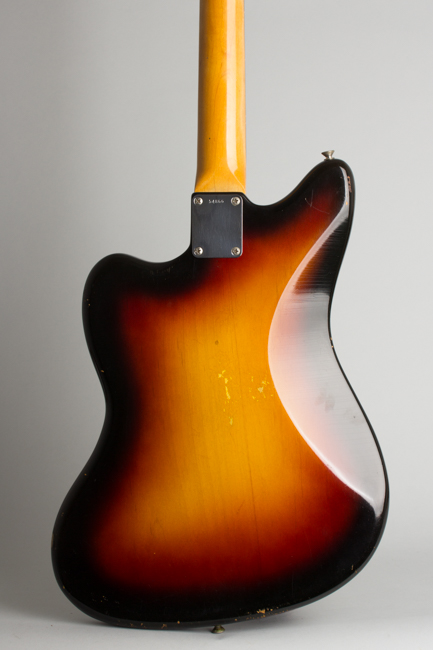 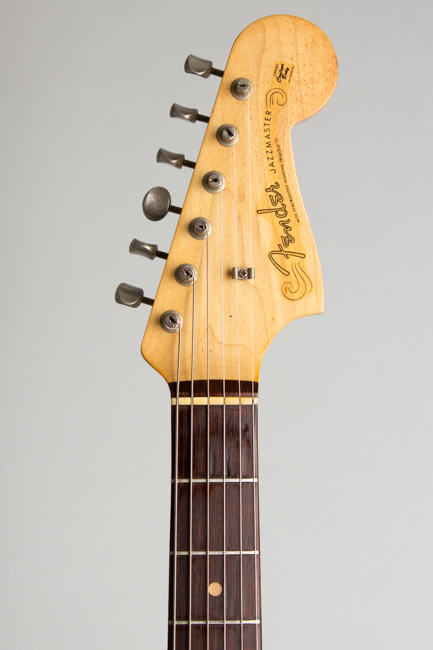 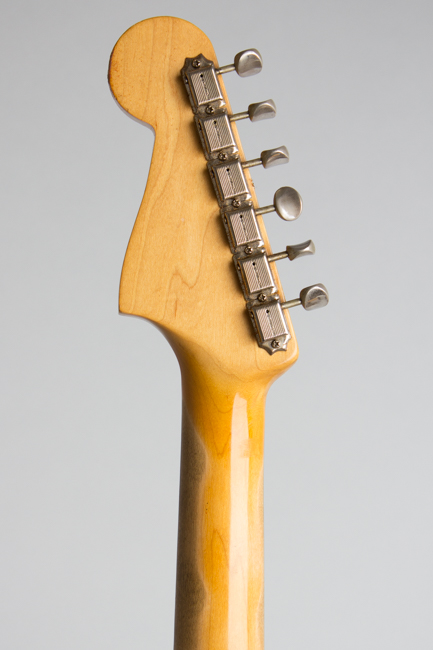 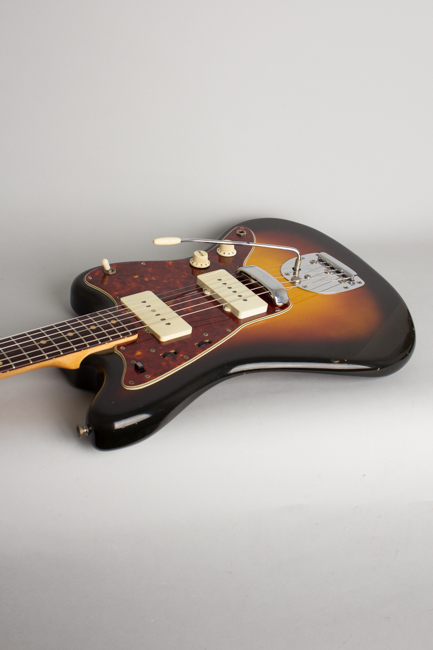 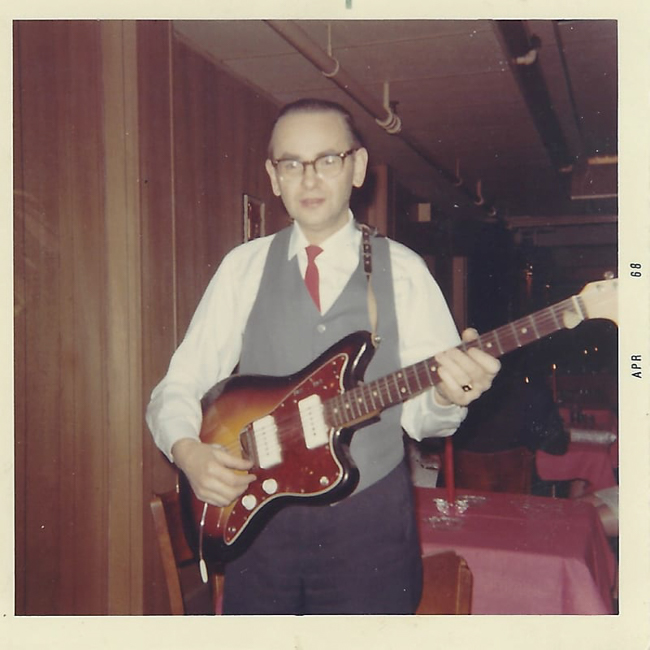 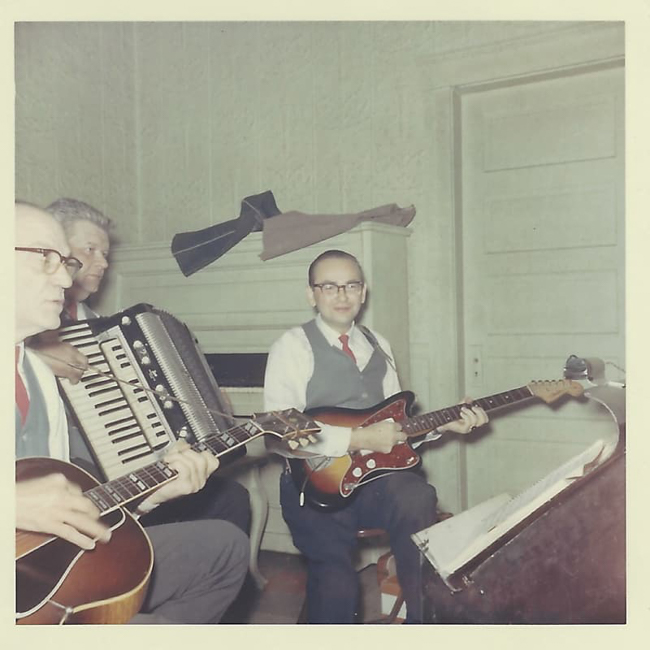 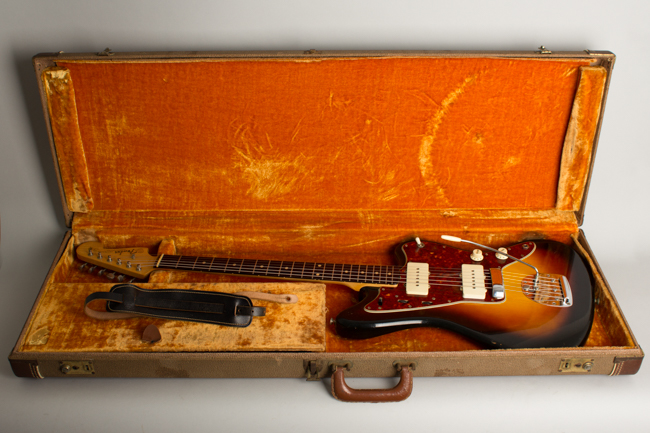 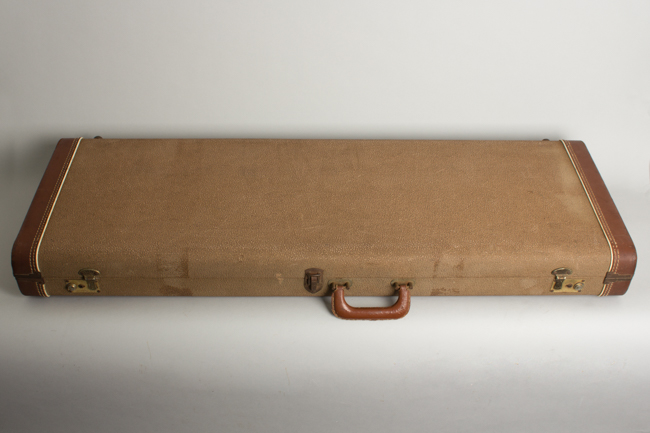 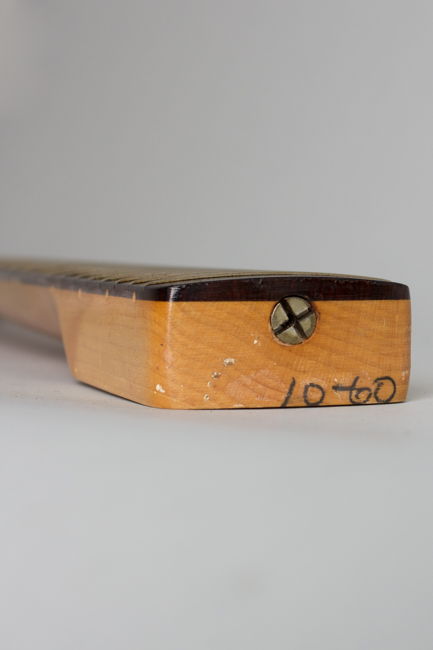 This superbly well preserved Jazzmaster is from late 1960, a wonderful example loaded with a bevy of classic pre-CBS Fender features. These include the thick slab unbound rosewood fingerboard with "clay" dot inlay, beautifully blended deep 3-color sunburst lacquer finish on the body and gold "Spaghetti" logo headstock decal. The pickguard is the lighter tortoiseshell nitrocellulose nicknamed the "pepperoni" style which was a Fender trademark at the time. The date 10-60 is penciled on the neck heel so the guitar was likely assembled and sold at the end of that year or early in 1961.

These early '60s Jazzmasters are usually exceptionally fine instruments, then sitting at the top of the Fender line with a unique feel and sound. While they never did catch on much with the jazz artists Leo intended them for this was a radically new and quite successful guitar at the time, seen with many period players across a variety of musical genres. The surf'n'twang players of the day took to them in droves, as did many R&B and Country musicians.

After a long period in the shadows the Jazzmaster has been increasingly popular over the last couple of decades with new generations of performers re-discovering its particular charms. This guitar remains original and complete and sounds exactly as it should, with the bright but slightly deeper tone character specific to the Jazzmaster. This prime Pre-CBS example has survived in exceptionally fine condition, having spent time in what looks like a small polka/lounge combo in the 1960s and then apparently being put away until recently. It still rests in its original brown Tolex hardshell case, looking more like a few of years old than 60!

Overall length is 41 in. (104.1 cm.), 14 in. (35.6 cm.) wide at lower bout, and 1 5/8 in. (4.1 cm.) in depth, measured at side of rim. Scale length is 25 1/2 in. (648 mm.). Width of nut is 1 5/8 in. (41 mm.).
Overall this is a nice clean and thoroughly original guitar, showing only some typical light wear overall. The lacquer is delicately checked like many from this period, with some minor fading to the face. There are small dings and dents in the body finish, mostly on the edges and back which has some noticeable buckle wear in the center. The red color in the sunburst is stronger on the back but overall there is not a lot of fade. Long ago something left a small burn mark on the lower edge of the ball of the headstock, and caused some spatter on the headstock face. As the somewhat fragile original over-the-lacquer Fender decal is fully intact, we have left this as it is.

The lovely tortoise celluloid pickguard shows some light scuffing but comparatively little shrinkage, which is a common issue on early Jazzmaster guards. All hardware is 100% original and complete, including the trem arm and bridge cover. The metal parts are still mostly shiny with some light wear and minor corrosion. It appears the guitar was mostly played with the bridge cover on so there is very little corrosion to the saddles and screws. The original small frets show some wear, and the neck finish is worn gently down to the wood on the edges as is common with old Fenders. The original factory shims are still in the neck pocket, with an extra cardboard piece added later.

It simply looks like this guitar has seen some play time long ago but little use since the 1960s. The frets and fingerboard show some wear in the lower positions and a bit of recrowning but are still quite functional, the guitar plays very well and sounds great. The original brown Tolex case is also quite clean, with the original black leather strap in the pocket along with some old flatwound strings. This is not exactly a time capsule guitar, but far nicer than most turn up now 60+ years on. Overall Excellent Condition.
×