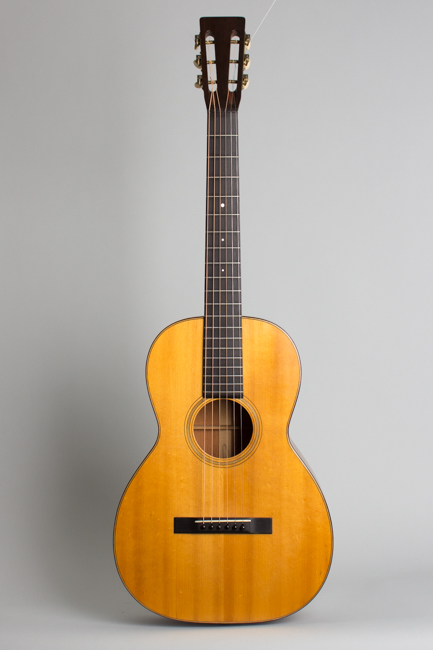 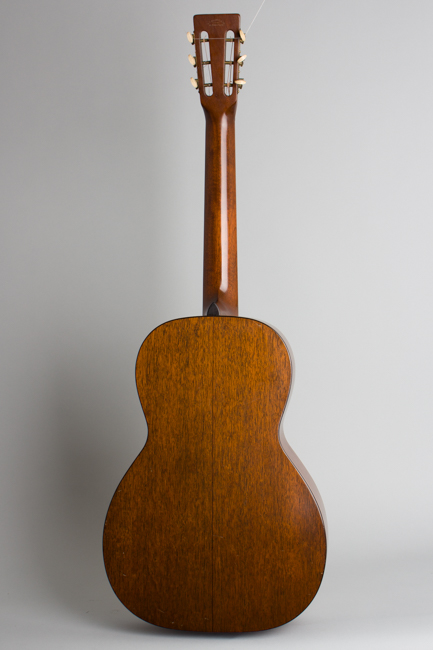 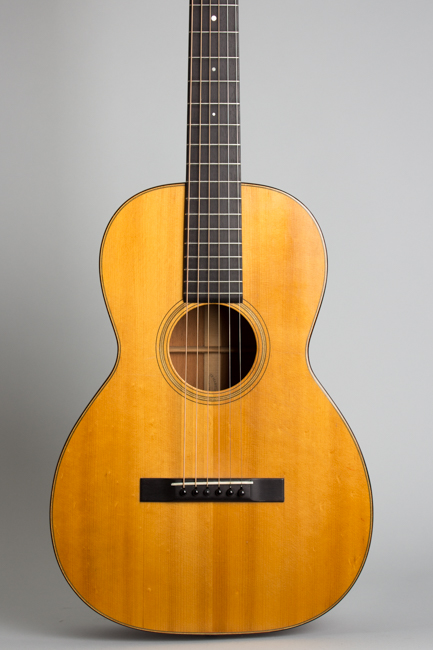 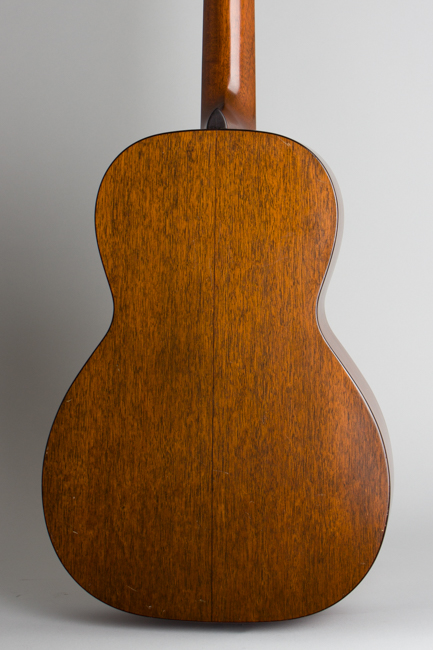 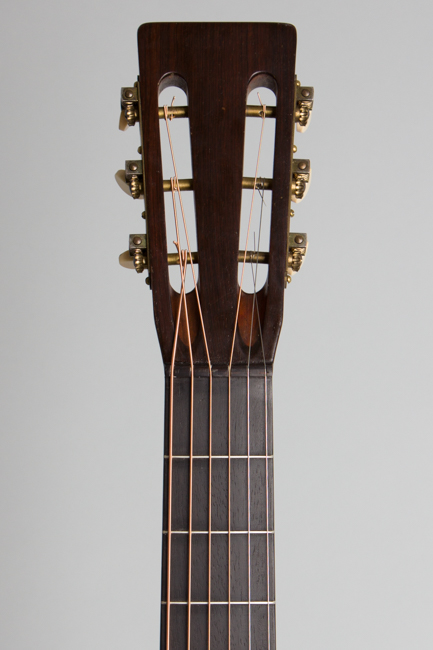 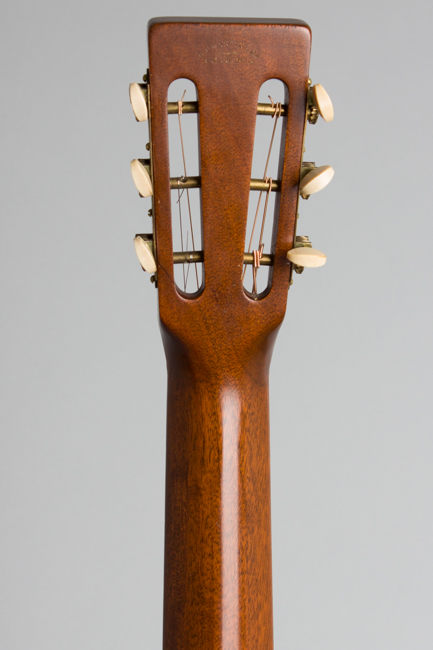 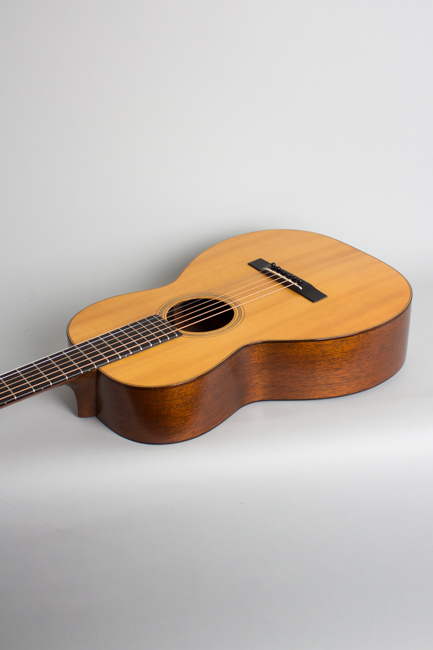 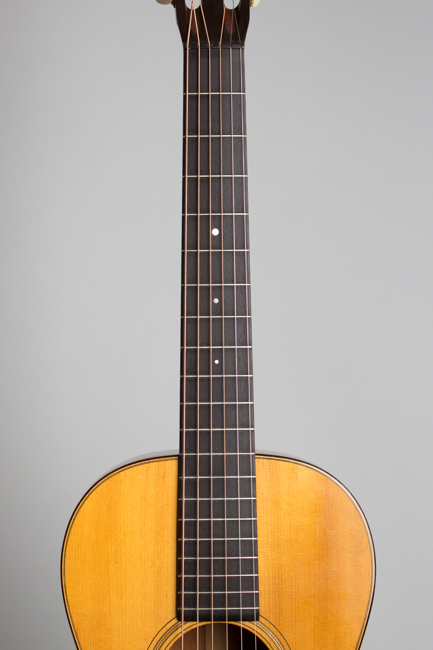 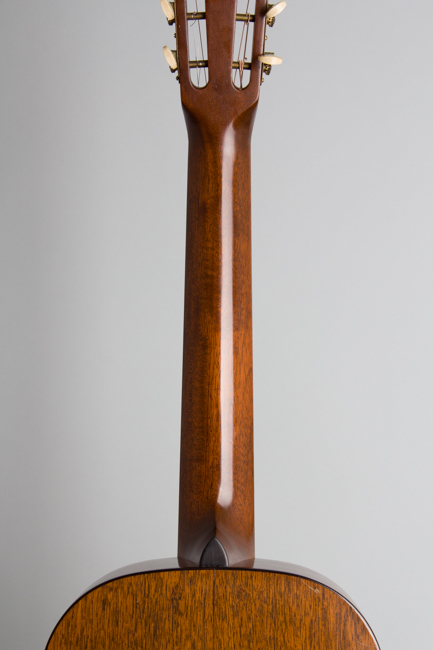 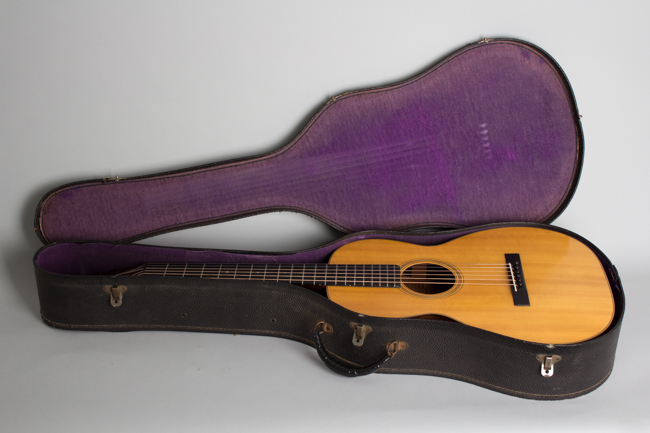 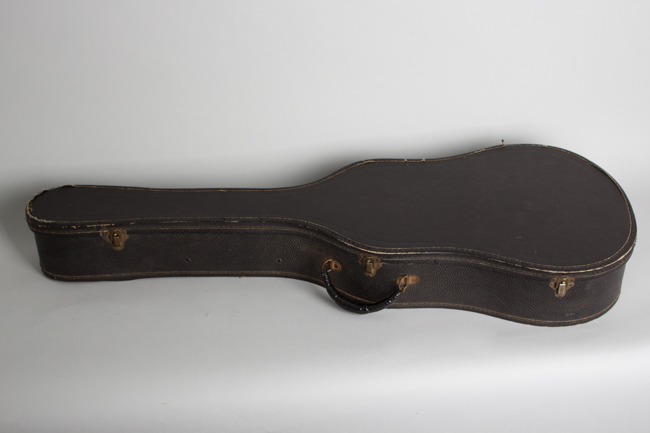 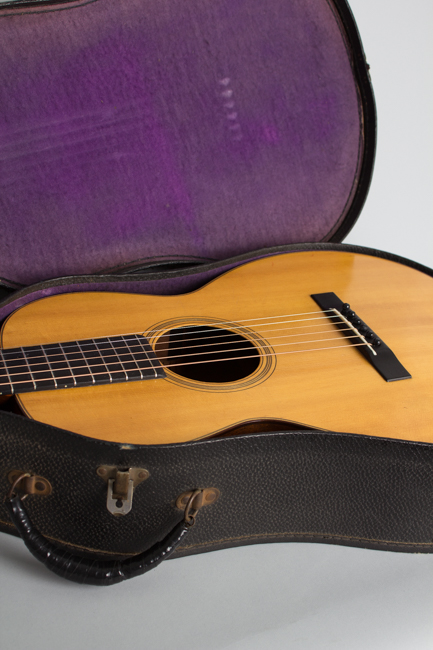 This is a beautiful and superbly well-preserved Martin 0-18 from late 1929, considered by many to be the best year from the golden era of these original 12-fret "old style" standard Martins. In 1929 the $40.00 0-18 had only recently settled into its specifications as a steel-string guitar, which was still a fairly new idea at Martin. This model has slightly beefed-up bracing compared to its early 1920s ancestors, but by modern standards the scalloped X pattern remains extremely delicate. The Style 18 had begun to be offered with steel strings only in 1923; this model was Martin's first spruce top guitar so equipped from the factory and soon became a popular instrument as a result.

The 0-18 is a 13 1/2" wide mahogany-bodied guitar with relatively plain trim. It would only be continue to be built in this 12-fret form for another couple of years after the end of this decade before the advent of pickguards and 14-fret neck joints changed its character as the 1930s rolled on. This 1929 guitar has its tight-grained Adirondack spruce top braced to handle steel string tension but remains identical cosmetically to its gut strung ancestors. Other features remain as before; the top and back are bound with rosewood and the narrow flat-ended bridge and 1 7/8" wide fingerboard made of very high-grade dark ebony. The position marks are three simple descending-sized pearl dots, the nut is ebony, and the tuners on the slotted headstock are unplated Waverly strips with grained ivoroid buttons.

This small-bodied mahogany guitar may have been near the bottom of the Martin line, but this was still a more expensive instrument than many competing 1929-era flat-tops. It is built throughout to the lofty standards that only C.F. Martin & Co. ever sustained, and would have been the finest instrument of its type in the world at the time. This is one of only 306 0-18s sold in 1929, the year of the stock market crash that caused the Great Depression to set in. This guitar would have been built within weeks of that epochal event.

This is a very fine playing instrument, considered a classic old-time stringband or solo guitar but suitable for any style of play. The sound is more powerful than one might expect from an instrument this size, full-bodied with surprising depth for the small body. It makes a great fingerstyle instrument but also works well with a flatpick, appropriate for solo playing, old-time fiddle band music on to early jazz and beyond. This is simply a wonderful 12-fret guitar, and in this amazingly unaltered condition something we just don't see much anymore.

This is a wonderfully original and well-preserved 90+ year old Martin, showing some general light wear but no abuse. The finish over the entire instrument is consistent showing no additional overspray or alteration. The very thin lacquer shows minor dings, dents, and scrapes with some pickwear scratches mostly below the soundhole. These are into but not fully through the finish, shallower and less obtrusive than the heavy strumming wear often found on older flat tops. Amazingly enough there are NO cracks anywhere on the instrument, which is extremely rare today on Martins from this era.

The original small ebony bridge is intact and unaltered; it may have been reglued but if so was an incredibly neat job. Only the bone saddle has been replaced. The neck has been very neatly reset and the original bar frets are still intact and very playable, neither they or the fingerboard showing much wear at all. The tiny 1920s maple bridgeplate looks to have had a second thin piece of maple added over it as a re-inforcement, exactly the same size fitted directly on top of the original. We have seen this before on other Martins from this early steel string period, but cannot absolutely verify it is factory work. On the whole the interior including the beautifully scalloped braces appears otherwise completely original and unaltered.

While not absolutely pristine, this guitar is a wonderful survivor in way above average condition for a steel-string Martin from this era. The great majority of these lightly built early steel-string Martins show far more use and repair --often poorly done -- than this one. Simply a superb playing and sounding instrument, this 0-18 includes the original heavy chipboard case it came in, still in amazingly functional condition with a period neck cord and 9oddly enough) a felt pick. Ninety+ year old Martins really don't turn up like this much any more, and when they do are always a treat to see, play, and especially hear. Excellent Condition.
×