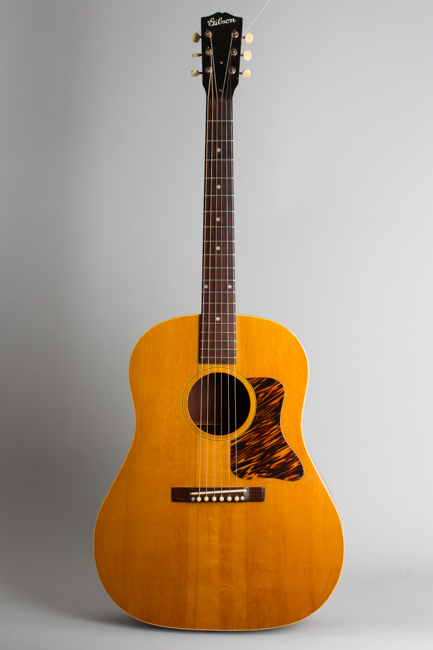 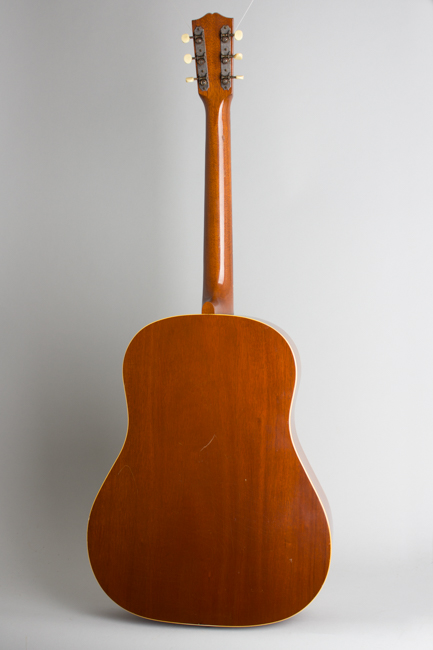 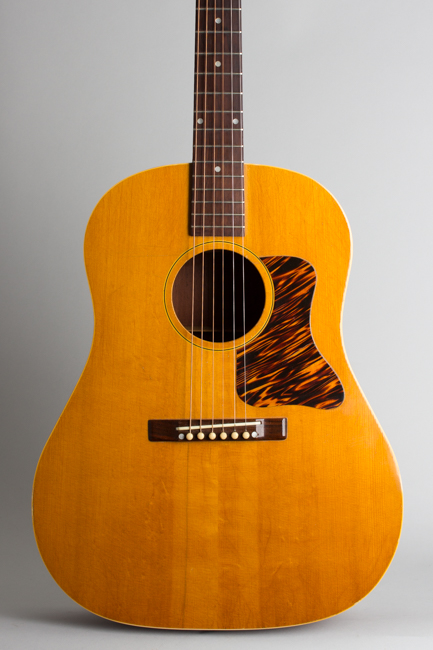 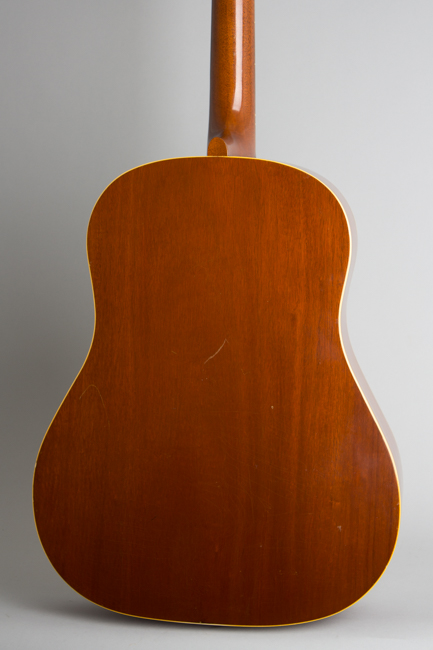 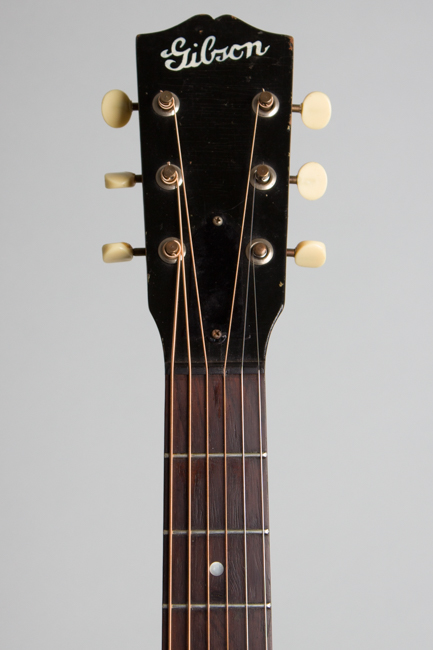 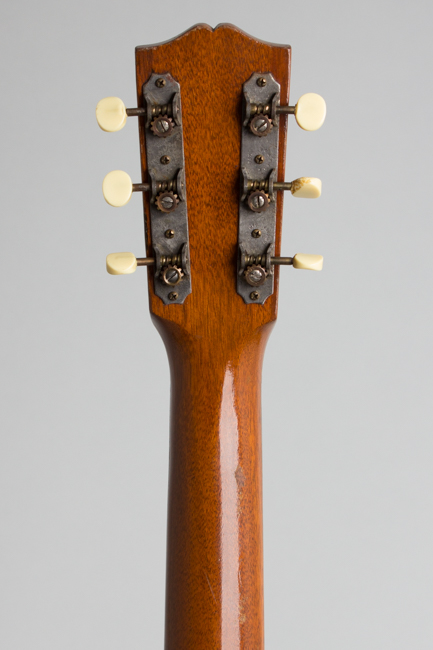 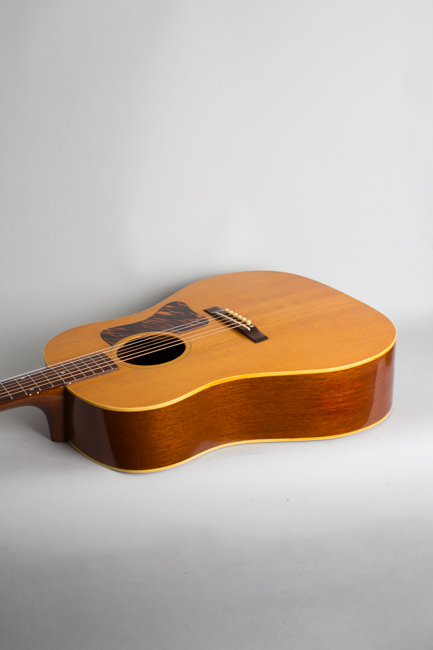 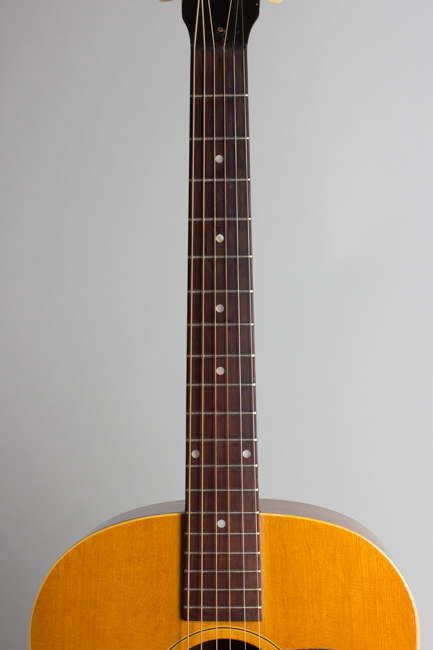 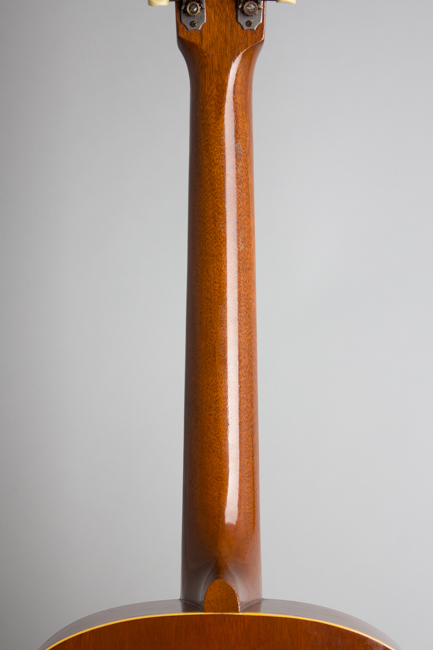 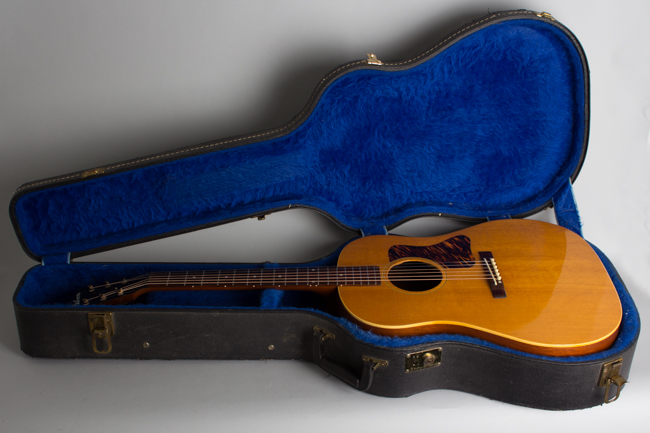 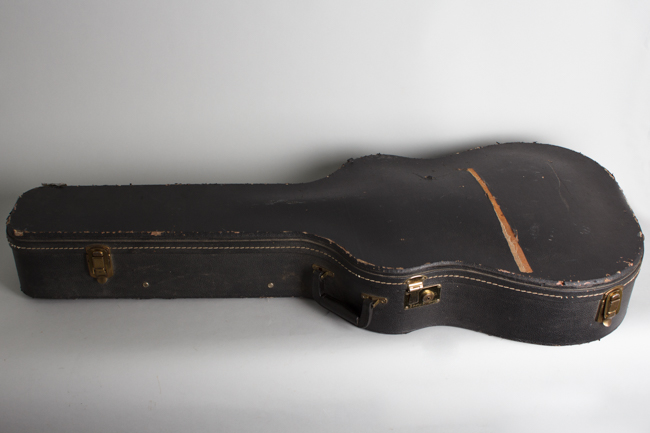 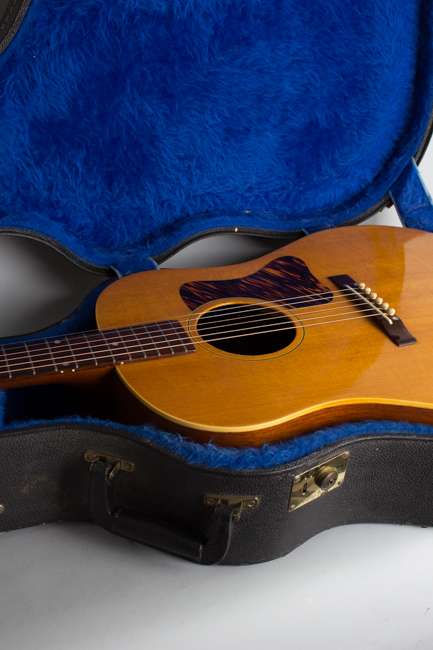 The J-35 was Gibson's "working man's" Jumbo flat-top in the late 1930s and early '40s. Selling on introduction in 1936-7 for under 40 dollars, it was a direct competitor to Martin's D-18. In the decades since the J-35 been similarly recognized as one of the all time classic flat-top designs. After a number of small changes over the next 5 years the J-35 evolved into the somewhat different J-45 during the war, so compared to that long-lived model its production history was fairly brief.

This mid-1941 guitar is a lovely example of the late model J-35, showing the natural finish option first cataloged in 1939. This largely replaced Gibson's traditional sunburst on this model for a couple of years. Natural finishes were a new look for Gibson that they promoted at the time, but it also makes the guitar visually more akin to the very successful Martin dreadnoughts of the period.

The neck on this guitar has a very comfortable (and surprisingly modern) C profile, which replaced the 1930s heavy V shape used on earlier J-35's that some players find awkward. Other original features include the branded openback Kluson strip tuners, a thin "French" heel, "firestripe" tortoise celluloid pickguard and silkscreen white script Gibson logo on the headstock.

The light tapered X-pattern combined with two-tone-bar bracing is quite light, making for a very responsive guitar. These 1941 models tend to be sweeter sounding than Gibson's 1930's Jumbos and J-35s, with a smoother tone if a bit less raw power. This is a great-playing and sounding guitar, fully original and a lovely example of one of Gibson's best 16" flat-top guitars

Overall length is 41 in. (104.1 cm.), 16 in. (40.6 cm.) wide at lower bout, and 4 7/8 in. (12.4 cm.) in depth at side, taken at the end block. Scale length is 24 3/4 in. (629 mm.). Width of nut is 1 11/16 in. (43 mm.).
This guitar remains in overall very nicely preserved original condition with some light general wear and a couple of typical if fairly minor repairs. The top has one spruce grain split running back from the bass side of the bridge that looks to have been repaired some time ago. This is fully sealed and cleated but was not oversprayed or touched up so is still plainly visible. The spruce just at the top edge of the pickguard shows a typical shrinkage crack, and there is a small repaired split in the guard itself just above the waist. All are solidly sealed. There are tiny grain splits running from the sides of the fingerboard towards the soundhole edge that for the most part do not even go through the spruce.

There is one other notable repair, a patch to the mahogany on the upper side around the turn of the bass bout. The piece has been neatly faired in but is still visible and a somewhat larger area of the side has been oversprayed. This is not overly conspicuous and has no impact on the guitar's integrity or sound. Other than the one area on the upper side the ambered natural lacquer finish remains nicely original with a moderately checked patina showing some scratches, dings and dents but no major picking wear.

The rosewood bridge and small maple bridgeplate remain original, the lacquering over the bridge is intact and it has never been cut down. The bone saddle is either later or has been re-shaped somewhat. Amazingly the celluloid bridge pins and end pin appear original. The oldest-style Kluson tuner plates have some light corrosion; the buttons and one of the gears have been replaced. There has never even been a strap button added.

This is an excellent sounding guitar, smooth and responsive but with more power in reserve than some of these. It does not appear to have had or ever needed a neck reset, and playability is excellent with just some minor wear to the original frets. We love all vintage J-35's and are always delighted to have another nice one to offer. Overall Excellent - Condition.
×