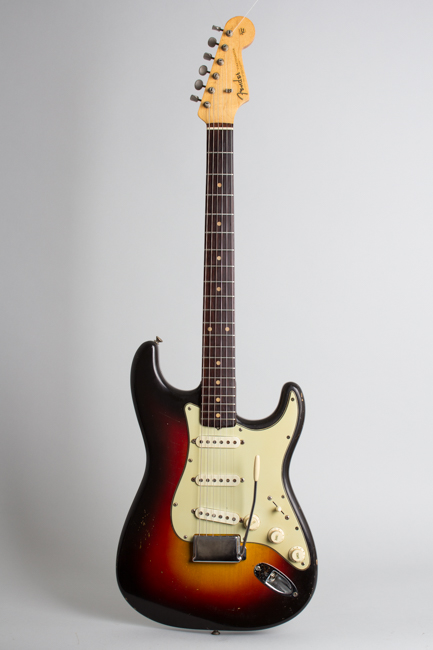 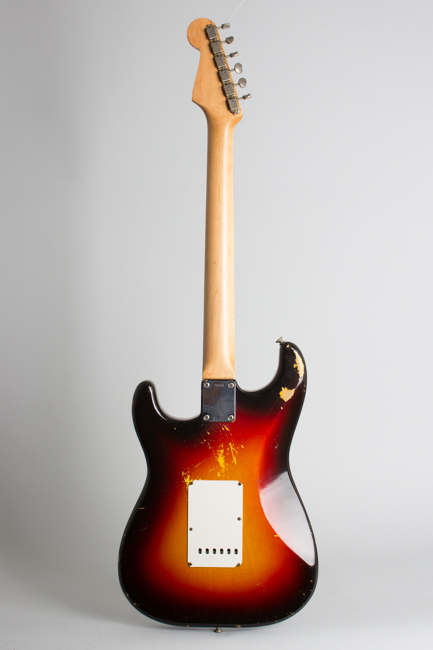 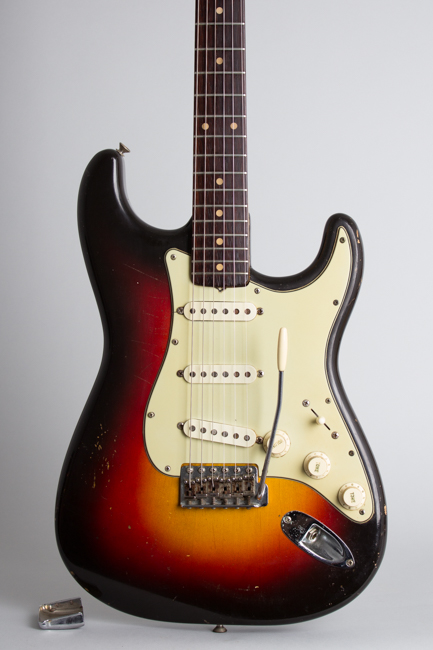 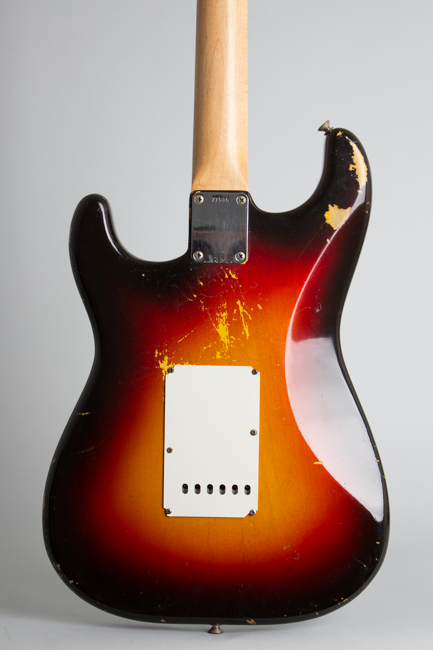 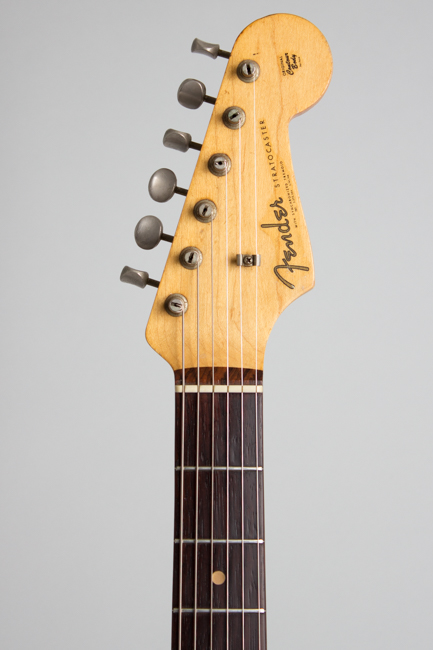 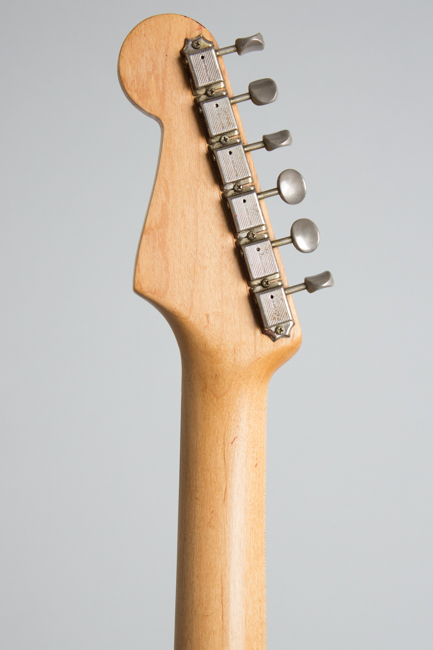 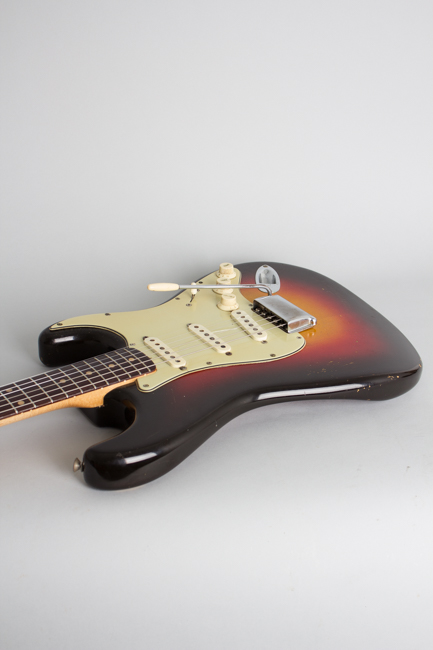 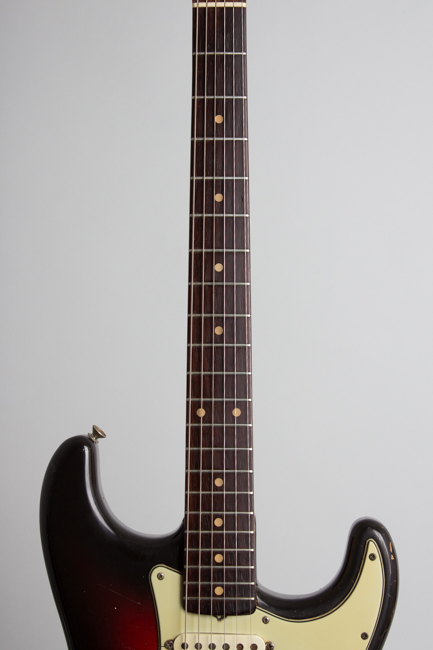 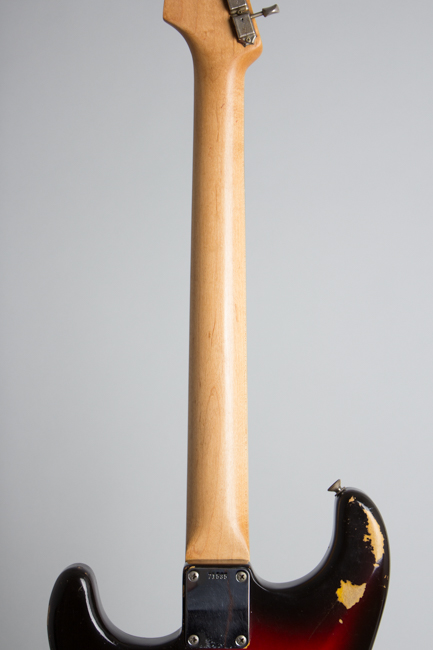 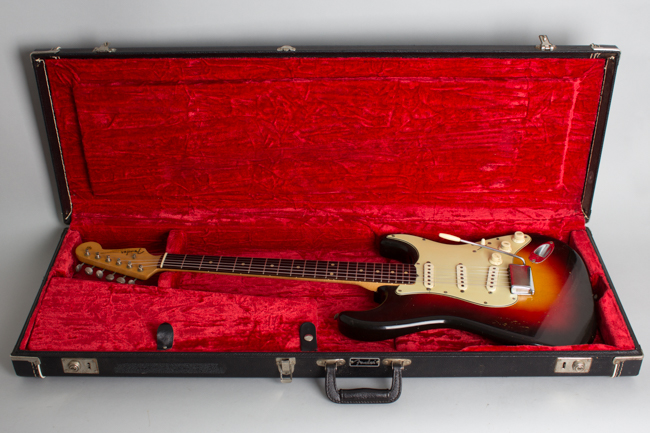 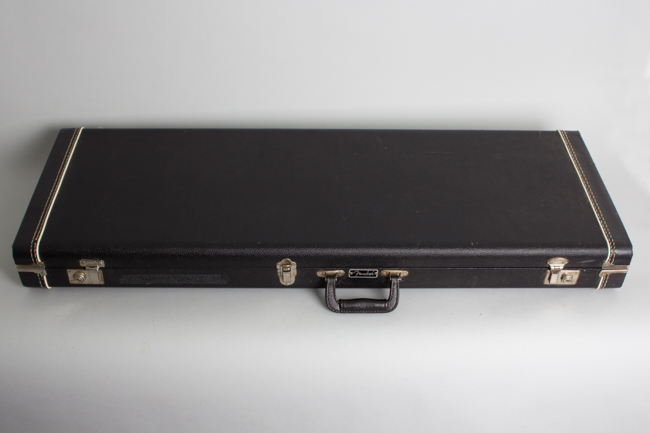 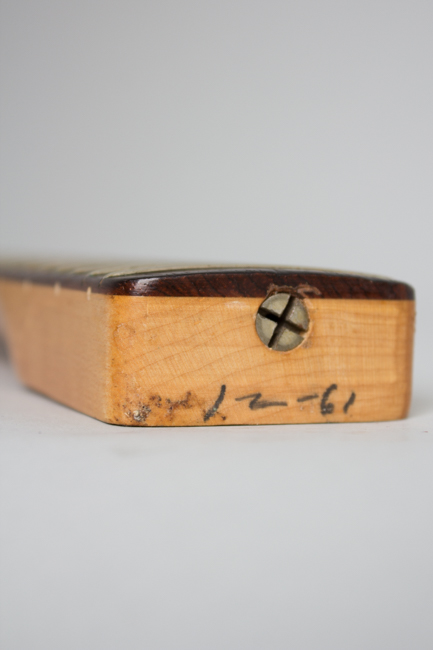 This is a beautiful and nicely original slab-board Pre-CBS Fender Stratocaster, played but nicely cared for with a beautiful patina with vibe to spare. When this guitar was assembled in late 1961 the Stratocaster was still a popular model but had been supplanted by the Jazzmaster as Fender's top of the line offering, with the even higher-priced Jaguar on the way. While many Surf'n'Twang players over the next few years would favor the Jazzmaster and its flashier sister, the Stratocaster remained distinctive with its 3-pickup layout and unique trem system. Surf Master/Originator Dick Dale always exclusively favored the Stratocaster, proclaiming he could not see why others would use anything else!

This guitar dates to late 1961, probably sold in early 1962 just around the dawn of the surf rock era. It shows typical period features, quite different in some ways from its 1950's ancestors. The rosewood fingerboard is the original thick version used from mid-1959, now referred to as the "slab board" to distinguish it from the thinner laminates Fender began using after mid-1962. It is inlaid with the "clay" dots that would also be phased out at the end of 1964. The neck carries the original smaller Pre-CBS style headstock with the older gold "Spaghetti" logo decal that was also phased out in 1964. While these are subtle changes, they make a difference to Strat afficionados, giving each period's instruments their own distinctive character.

The finish on the body is a beautifully blended 3-color sunburst that has faded very little over the decades, retaining a strong red hue. The pickguard is a nice example of the lovely thick greenish-hued nitrocellulose that would also disappear in 1965, replaced by plainer white plastic. The neck is hand dated in pencil 12-61, the body does not bear any discernable date marks. Two pots carry date codes of the 4th week of 1961, with the middle pot the 34th week of 1960. The wiring and solder joints are original and undisturbed.

All three single coil pickups have a strong well-defined tone, and the "in between" settings offer up the familiar "Stratty" quack without sounding as glassy as many. These early 1960s slab board Stratocasters have become a player's favorite over the last few decades, often offering up a somewhat meatier tone than either the earlier maple fingerboard guitars or the later CBS period examples.

This fine example of prime Fender mojo has been played but not abused. It has lost the original case but retains the original trem arm, bridge cover, and trem cavity cover. This is a great-sounding slab-board Strat, an example of what Fender's reputation and success were built on well before "things started a-changin" in Fullerton with the January 1965 sell-out to CBS.

Overall length is 38 15/16 in. (98.9 cm.), 12 3/4 in. (32.4 cm.) wide at lower bout, and 1 1/2 in. (3.8 cm.) in depth, measured at side of rim. Scale length is 25 1/2 in. (648 mm.). Width of nut is 1 5/8 in. (41 mm.).
Overall this is a nicely original guitar, showing some typical wear but still in excellent playing condition. The only area that has seen notable work is the back of the neck. The finish there had an old overspray that was subsequently buffed off, resulting in a smoother more satiny feel than the traditional Fender lacquer. The original lacquer was not stripped, it has simply been buffed down a bit. No other finish work has been done to the guitar, which remains otherwise fully original.

The body finish retains very strong color with minimal fade. Overall the lacquer is better preserved than many with the standard assortment of dings, dents, scrapes and chips with the heaviest being belt buckle wear to the back. There is very little of the typical armwear on the upper body, it has some scuffing on the face but no serious loss. The body has a couple of tiny touched-in spots here and there but no overspray or other finish tampering. The beautiful "green guard" has not shrunken up as much as many have; all the tips are intact but it does have some notching from truss rod adjustment and the typical crack just above the neck pickup.

Internally the guitar is unaltered internally with untouched solder joints and all original components. The black-bobbin pickups are all very strong and sound great in any combination. The bridge base, saddles and screws have some typical corrosion but everything is fully functional; the height adjustment screws are correct style but may have been replaced along the way as they are less corroded then we might expect. The trem arm and bridge cover both have some plating loss but are still in good shape. The original trem plate on the back has the ends cracked off all four corners but is still functional.

The original frets have been crowned down a bit (probably recently) and show no subsequent wear; The nut is newer. The guitar is an excellent playing instrument as it stands although players who prefer a larger wire would likely want a refret before too long. While not completely untouched this Strat is a better and cleaner survivor than many, a delightful piece of the slab-board Fender era grail. Overall Excellent - Condition.
×