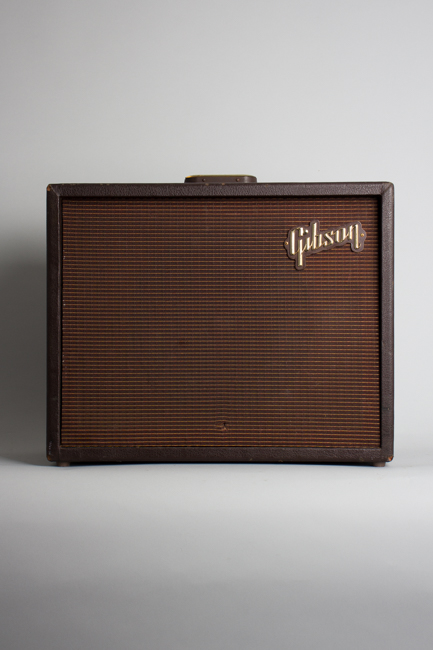 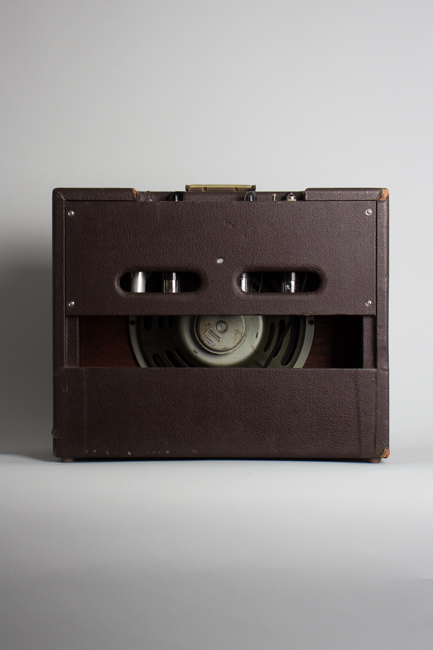 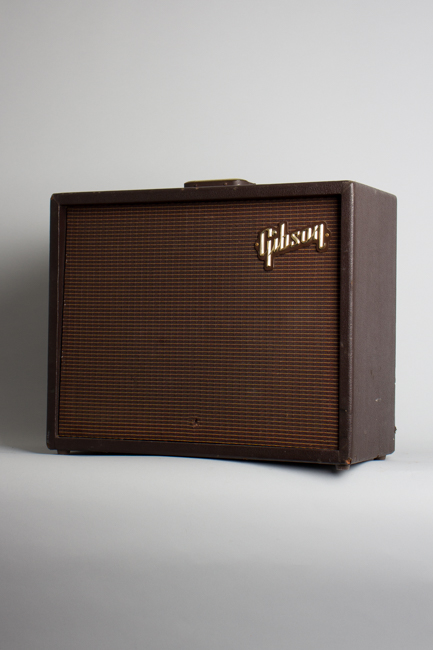 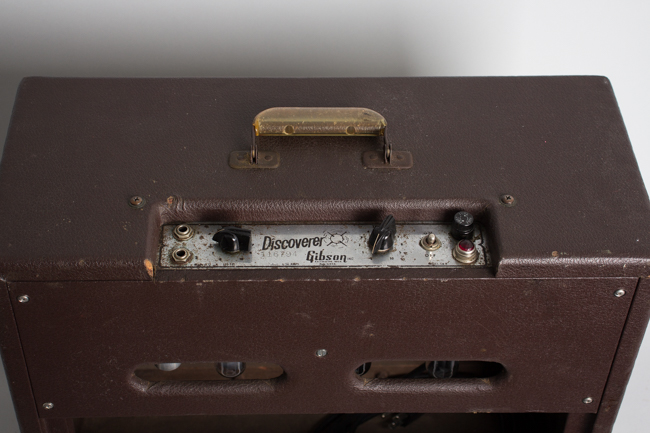 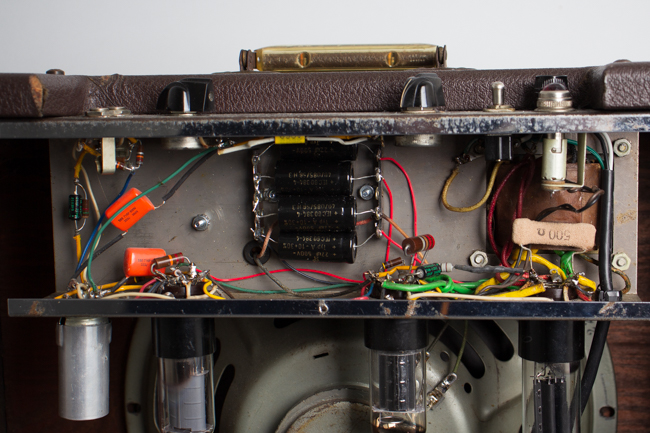 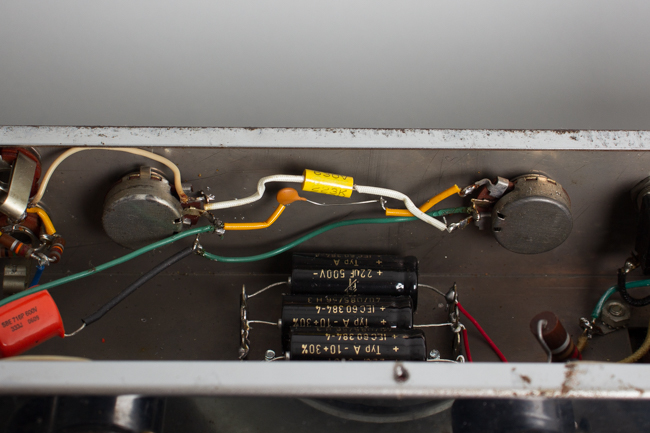 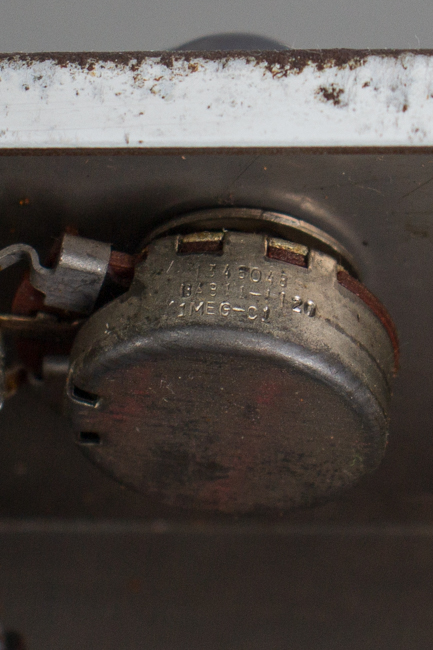 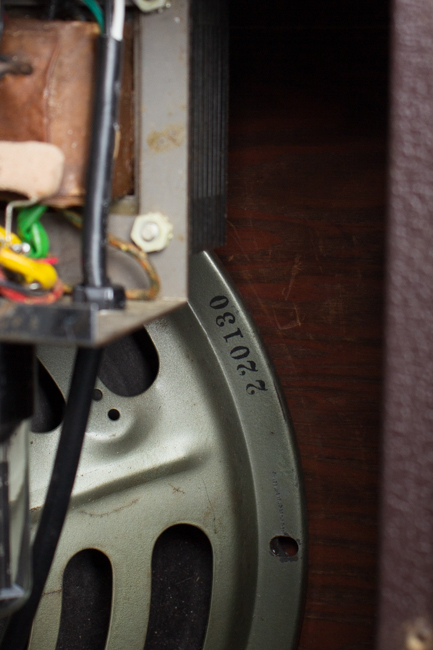 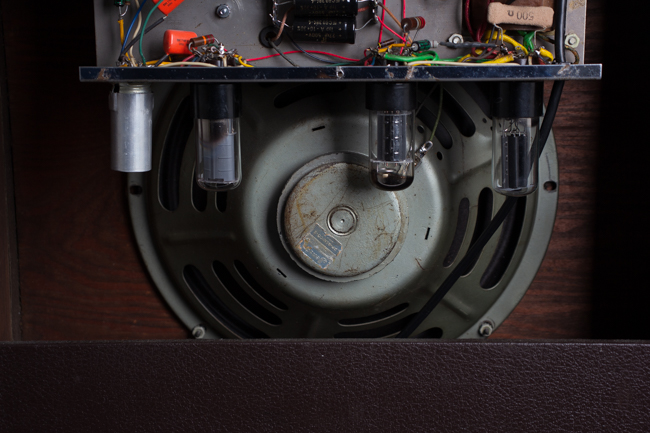 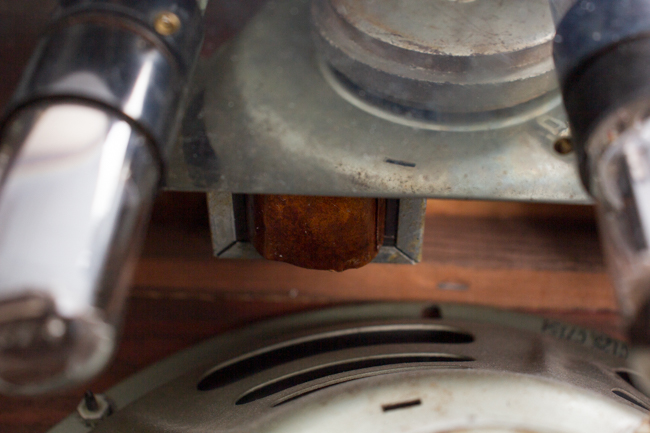 This funky little Gibson amp from the dawn of the 1960s is a fairly simple design but still one of the company's best, most interesting and truly toneful period offerings. It is labeled "Discoverer", a name introduced in 1960; it was the space age after all! There is even a little rendering of the Discoverer satellite on the faceplate. While still using the older 1950s GA-8 model designation, it is actually a new design for the new decade. It is a fairly compact 10 watt combo with more kick than many similar small amps.

This example was likely made in mid-1961. The cabinet is covered in lightly textured burgundy/brown Tolex, an unusual feature for this model. The faceplate has two inputs and controls for volume and tone. The tube compliment consists of two 6V6 output tubes running in parallel single ended configuration putting out around 10 watts into a 12" speaker -- a rare output tube configuration, unique to these early non-tremolo GA-8s. Electrically, this is not unlike having two single ended Fender Champ power sections in parallel. The result is a rich and thick overdrive unlike any other low-wattage amp we've heard! Even the handle is extra cool, with a clear plastic center featuring an embedded "Gibson" logo. This was fairly successful for Gibson with 967 shipped in 1961; they seem fairly rare now however, as the model was not in production for that long.

Height is 16 in. (40.6 cm.), 20 in. (50.8 cm.) width, and 8 5/8 in. (21.9 cm.) deep.
Overall this amp shows general wear and tear but no heavy abuse or alterations. The dark-colored Tolex shows some minor wear and scuffing around the edges. There is also quite a bit of surface corrosion on the faceplate, but nearly all the stenciled graphics remain intact. The fragile raised plastic Gibson nameplate on the grille is also intact as well as the cool plastic-center handle.

Electrically, the amp is mostly original: it mounts an original 12" Jensen C12R speaker coded 220-130, dating to the 30th week of 1961. It still has the original cone and sounds great. The amp retains the original power transformer, marked [GA-23P] and the original output transformer has been professionally rewound by Mercury Magnetics and works perfectly. Visible pot codes are from the 48th week of 1960. The amp has received our typical servicing; including replacement of all electrolytic caps, cleaning of all pots, sockets and jacks, biasing to spec and three-prong power cord installed.

This is a really cool sounding little amp and still something of an unsung classic, with a lot of tone in its 10 watts! This amp may have seen some interesting places in its day as it came from a pawnshop in Chicago! Excellent - Condition.
×