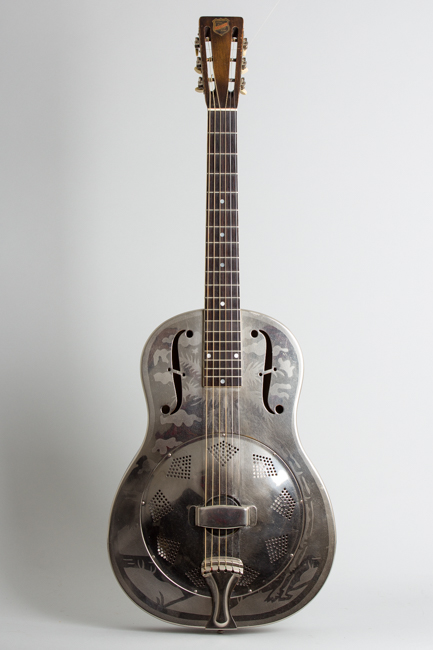 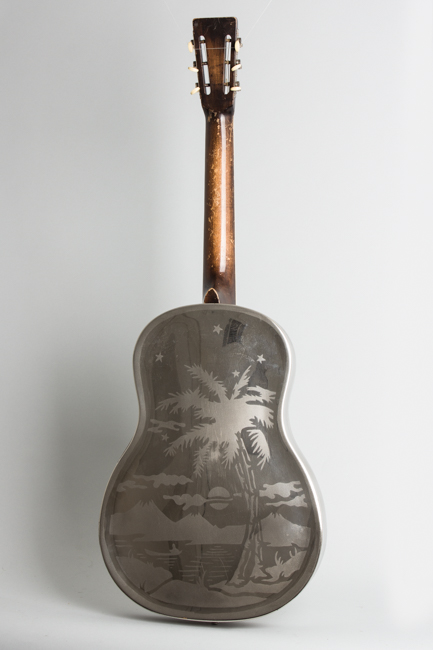 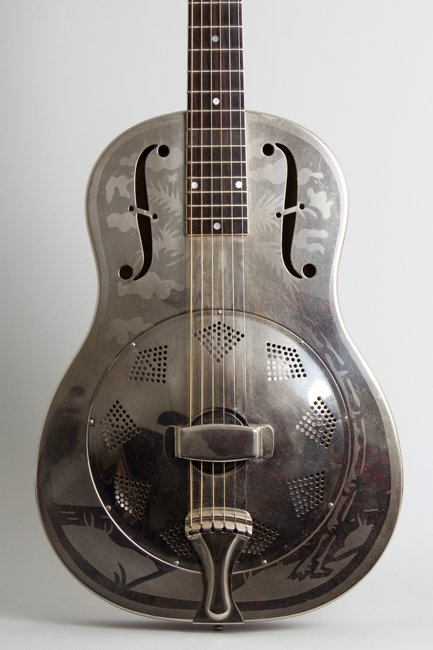 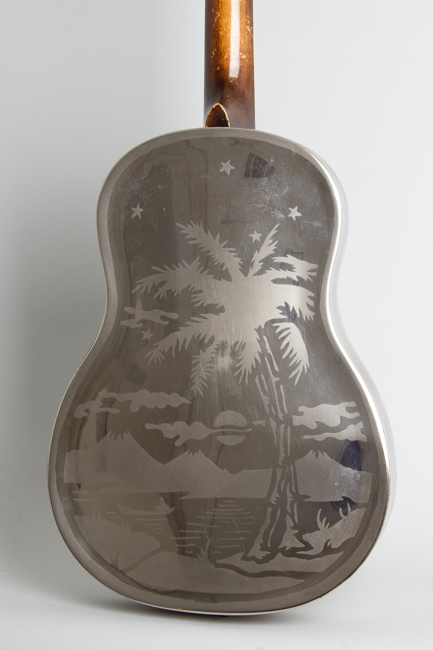 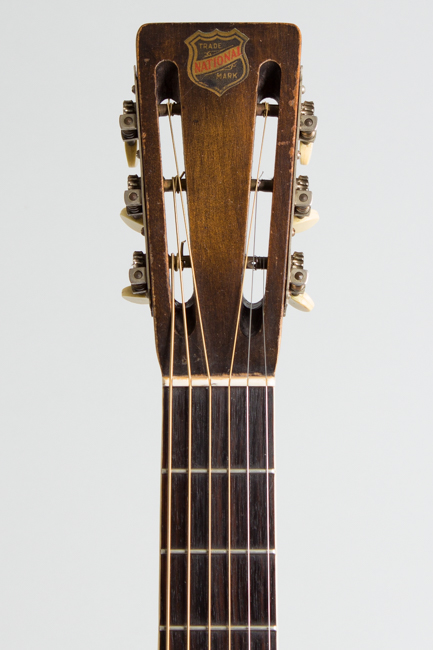 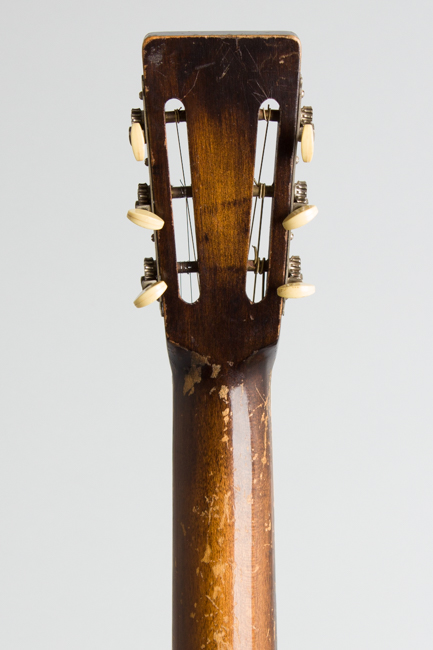 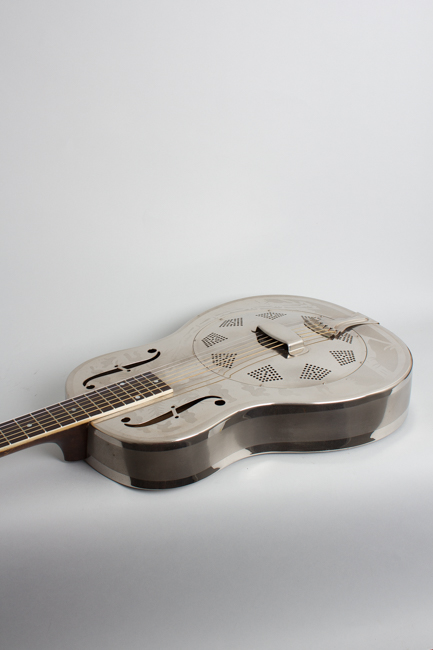 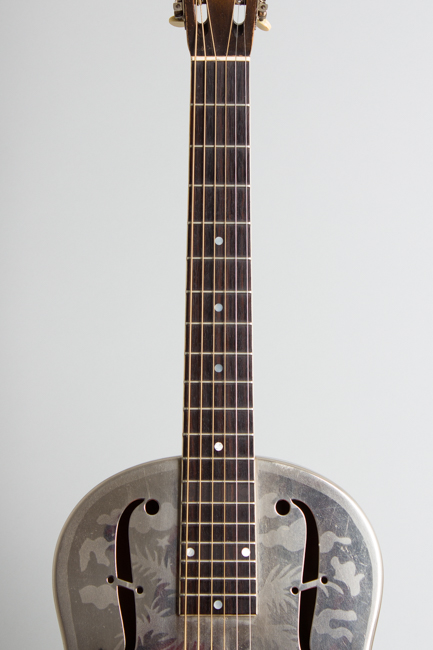 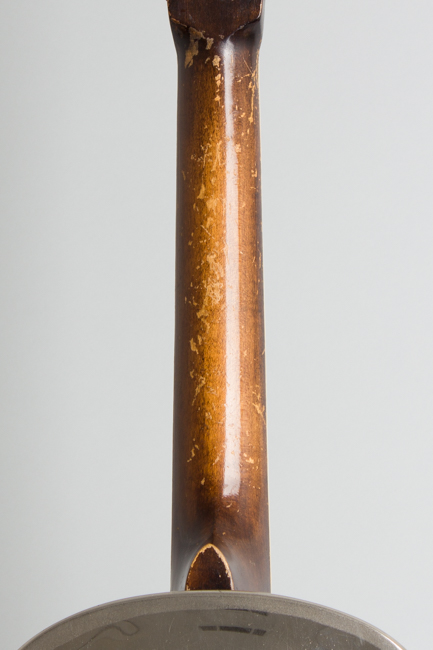 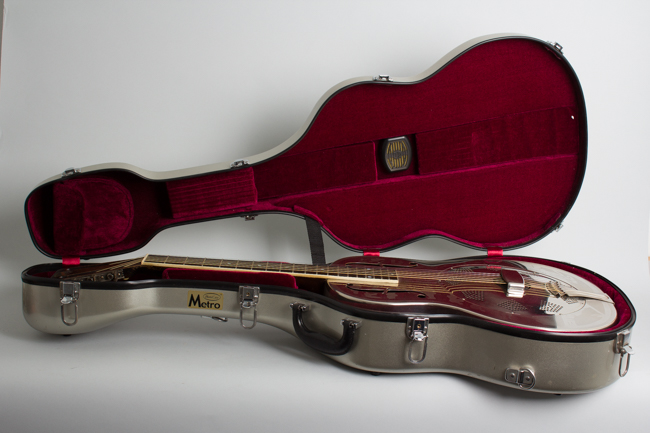 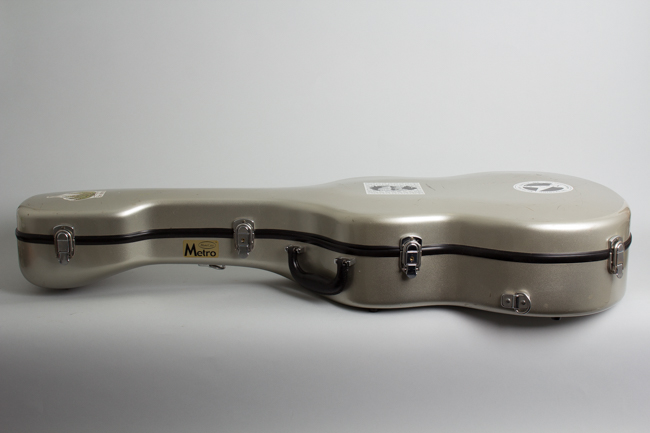 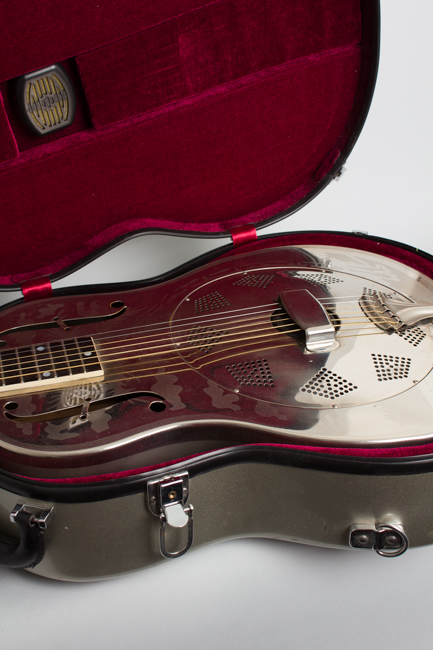 This is a lovely and fairly early first-year National Style 0 single-cone resonator guitar, one of the company's classic pre-war instruments. This Style 0 has a 12-fret brass body with flat-cut F holes and typical sandblasted Hawaiian scenes; it was one of the company's earlier single-cone designs. The elaborate Tricone resonator guitars (priced from $125 up) had done well enough in the 1920s, but in 1929-30 with the Great Depression kicking in the National firm heeded less expensive instruments fast. The Style 0 was the most striking of the pro-grade single cone guitars, much flashier than the cheaper painted Triolian and Duolian models with its gleaming nickel plated and decorated surface.

The body is adorned with whimsical sandblasted Hawaiian scenes in variation #2 as per the Brozman book. The maple neck has a bound fingerboard and pearl dot inlay. The coverplate is the earliest style with no raised ribs, and the f-holes are the original "flat-cut" style. In 1930 this guitar was sold at $62.50, half the price of as Tricone Style 1. Although that for many Americans a considerable sum at the time, the Style 0 was hard to beat for its combination of volume, tone, and beauty even in those economically tough times. 90+ years on the Style 0 remains an enduring classic; a favorite of many players then and now, especially for period musical styles with the spotlight on early blues.

This early Style 0 has seen some reconditioning but remains relatively clean overall and an excellent player. The nickel plated finish is still quite bright, with some scratching and scuffing but no large areas of wear. The coverplate has escaped the usual finger wear spots, in fact all the plating is cleaner than many of these 90+ years on. There is a decent amount of wear to the finish on the back of the neck, dings and scrapes mostly but no deep capo wear spots. The headstock is much cleaner and the National logo decal is fully intact.

The fingerboard may be later than the rest of the instrument, though not by much; there are two filled position dot holes at the 14th fret that are otherwise inexplicable. This is not the first Style 0 from this period we have seen that appears to have possibly had the original "ebonized" maple fingerboard replaced early on. At any rate the frets are later and the neck has been neatly reset; The cone and biscuit are original, the saddle is newer. The original tuners still work well. This is a fine playing and sounding Style 0, set up to be compatible for either standard or Delta style with the action fairly low at 4/32" at the 12th fret. This is one of the nicer Style 0's we have seen in a while, a fine early depression era survivor. Overall Excellent Condition.
×