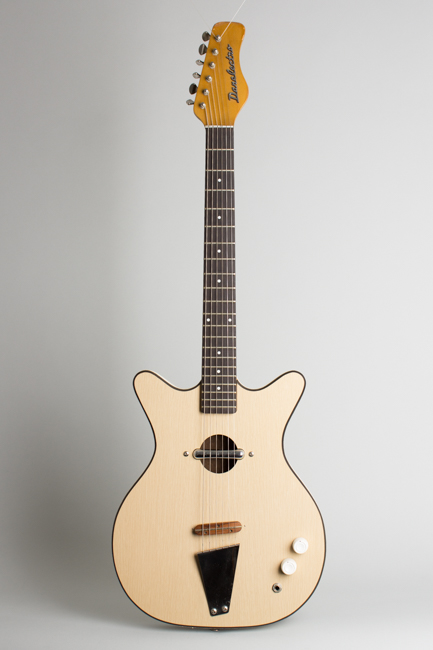 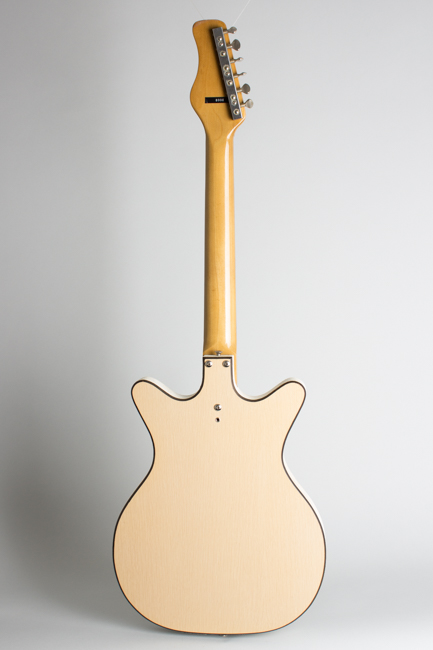 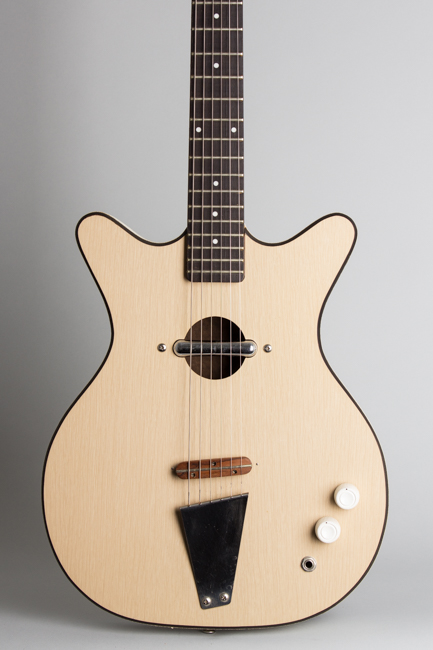 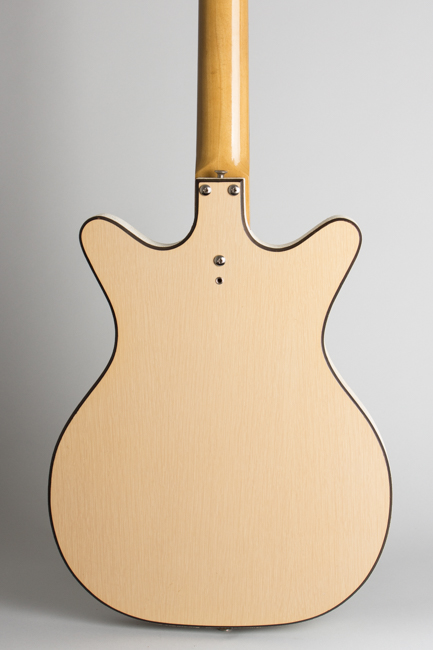 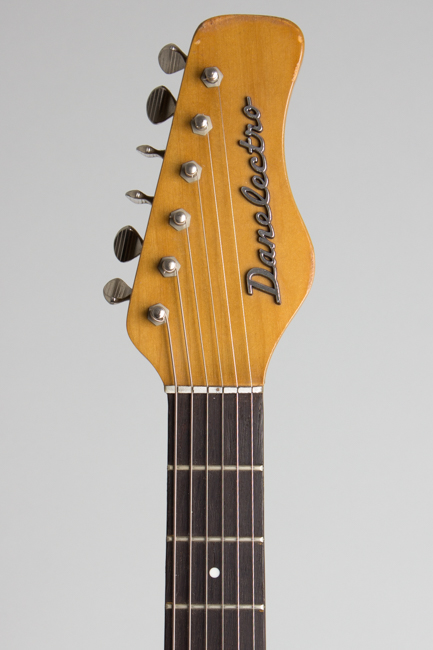 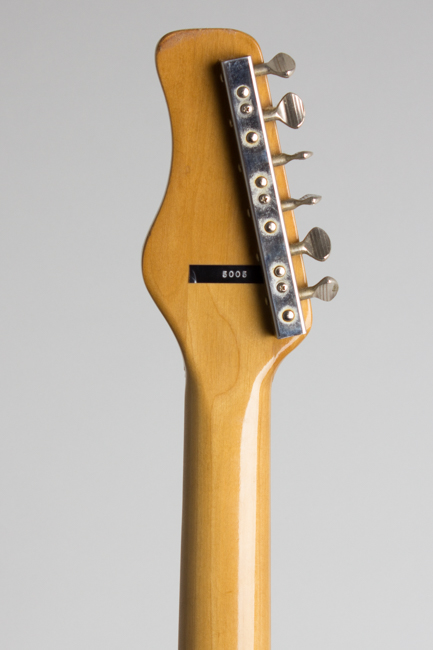 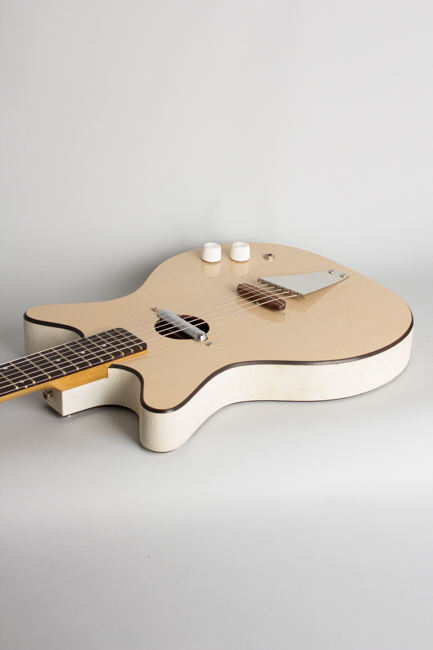 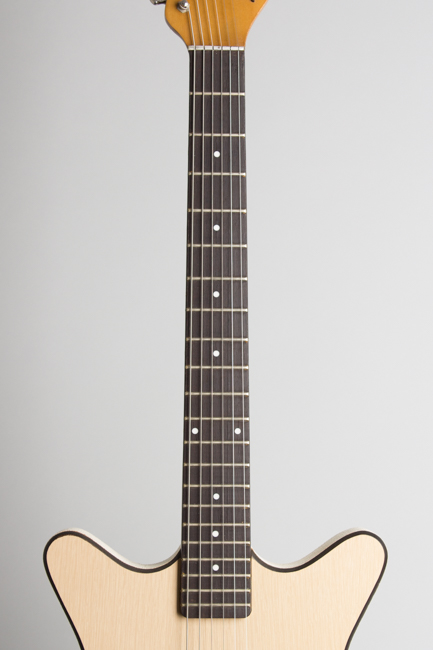 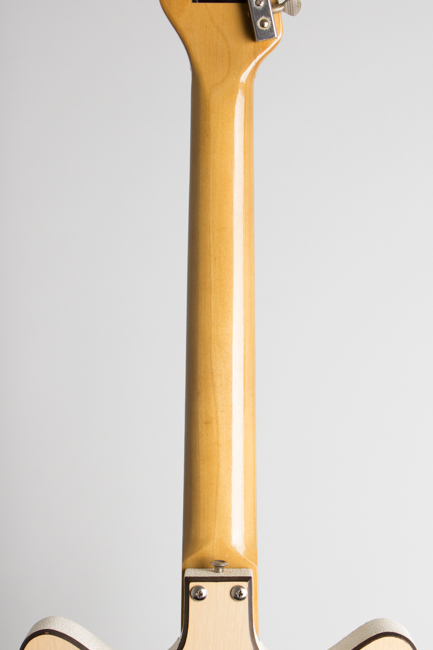 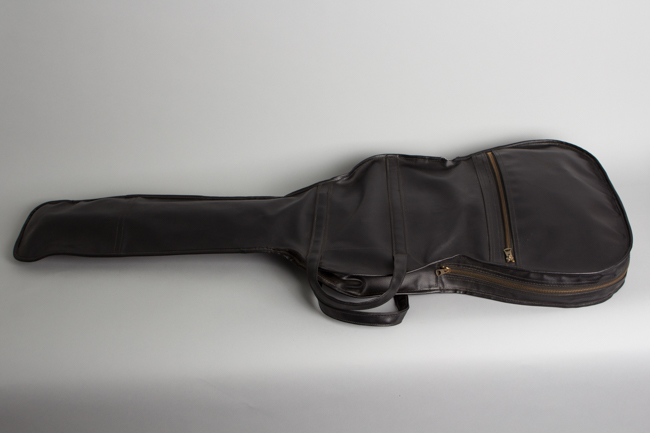 The "Convertible" model acoustic/electric guitar was one of Danelectro founder Nathan Daniels' more whimsical creations. This is a very late example of the model 5015, offered up through the end in 1968 as the company's least expensive model. It was also the only primarily acoustic instrument the electric-minded firm offered, although hardly competition for most conventional flat tops.

The Convertible is a thinline hollow-body electric guitar with a single lipstick tube pickup in the round sound hole with the single tone and volume knobs and a jack mounted to the top. This model was also offered for sale without a pickup (hence the name) and the electronics package was available as a separate kit, so you could "Convert" it for an upgrade to amplification at any time after purchase.

The hollow Masonite-and-pine body is finished rather like a 1950s kitchen table with a Formica-covered top and back and textured vinyl siding. The neck is the standard Danelectro style, poplar with a rosewood fingerboard. In 1967 this Coral-style single sided headstock replaced the earlier "Coke Bottle" shape but the rest of the instrument was unchanged. The headstock face is adorned with a snazzy chrome DANELECTRO plastic logo and it mounts the inline "skate key" strip tuners used from 1964. The original list price of this guitar with a pickup was all of $65.

Convertible guitars do not have a solid center block like the Danelectro standard models and thus have more body response than any other Nathan Daniel design, making for a fairly functional acoustic guitar -- considering they are made of the finest Masonite! While never replacing anyone's Martin they have proved enduringly popular with a unique tone all their own, both plugged and unplugged. This particular guitar has not seen much use, ever and has not strayed far from its birthplace of New Jersey since the beginning.

This is a super original guitar with no repairs or alterations and only the slightest wear, appearing little used over the last 50+ years. The top is very solid, compared to many that have sagged noticeably by now. The only real wear is to the top of the headstock, from 50+ years of rubbing on the inside of the gig bag. It is still accompanied by the original black Naugahyde gig bag, stamped "9-67" internally. There are some Ernie Ball string packets and a receipt from the early 80's in the case pocket, apparently from the last time somebody actually strung and played the guitar. It plays and sounds exactly as it should, a super cool and well preserved package of original Jersey Danno goodness. Excellent + Condition.
×