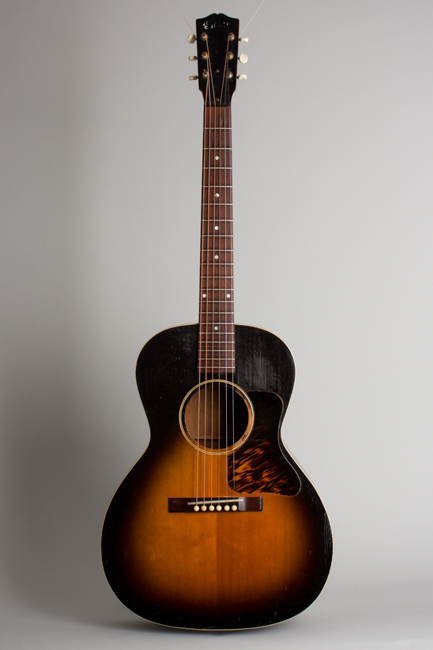 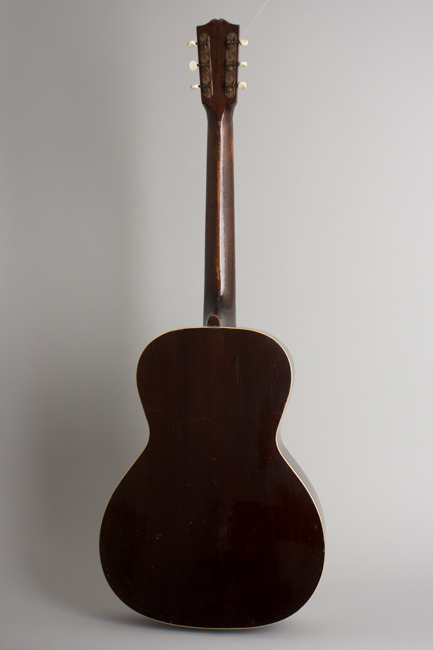 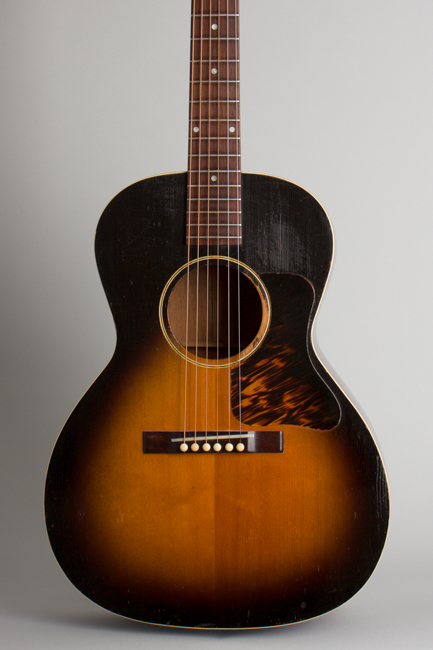 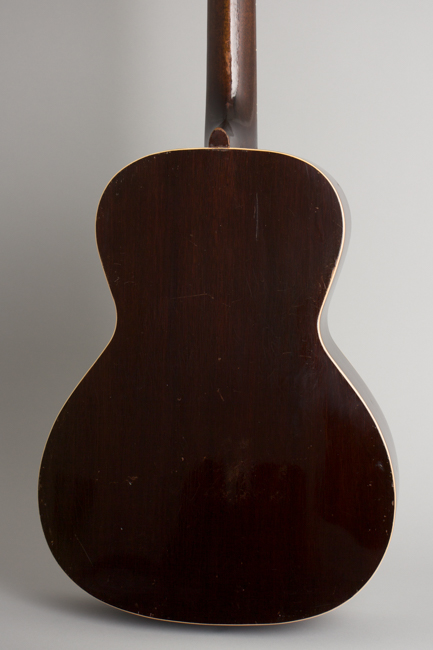 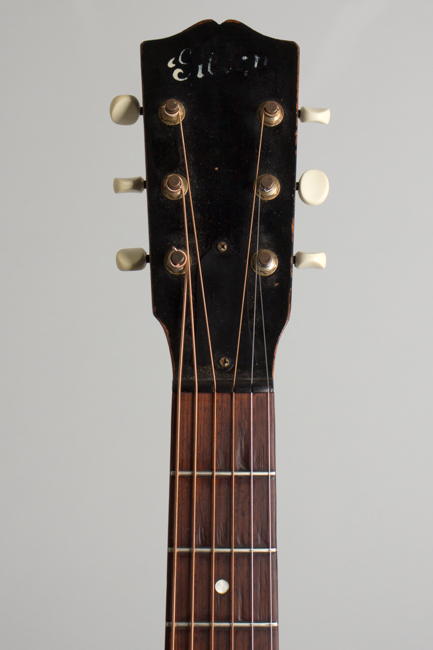 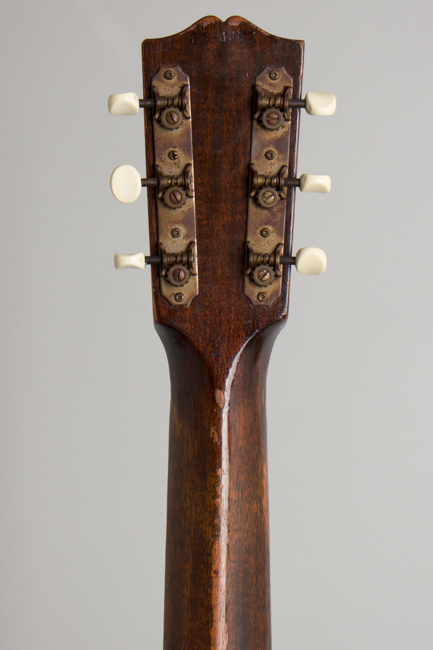 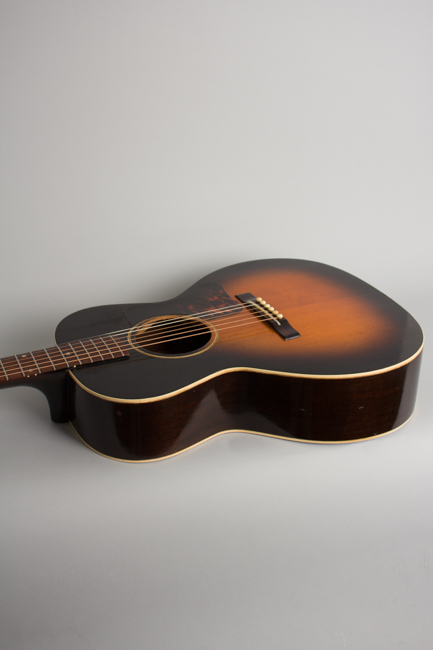 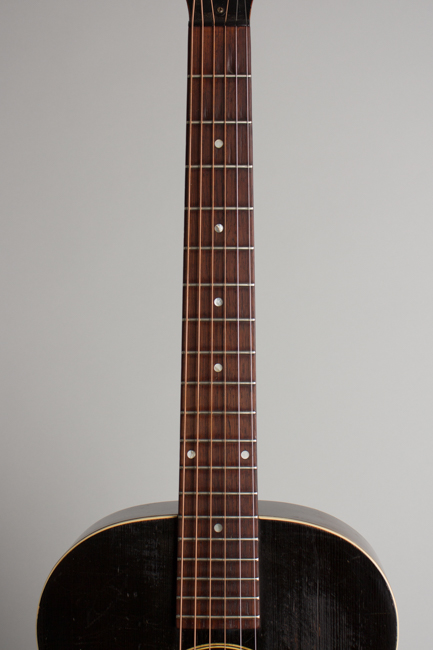 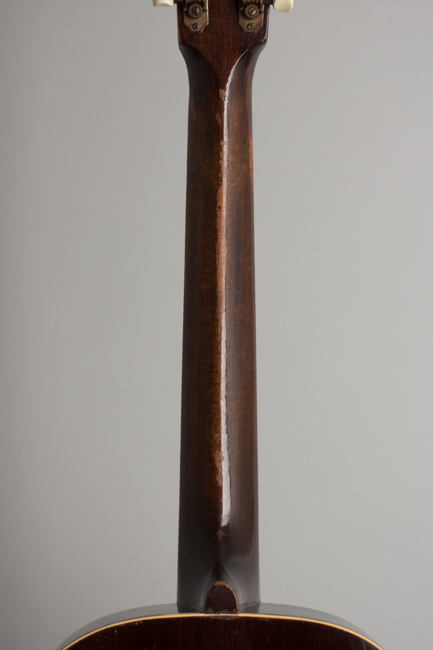 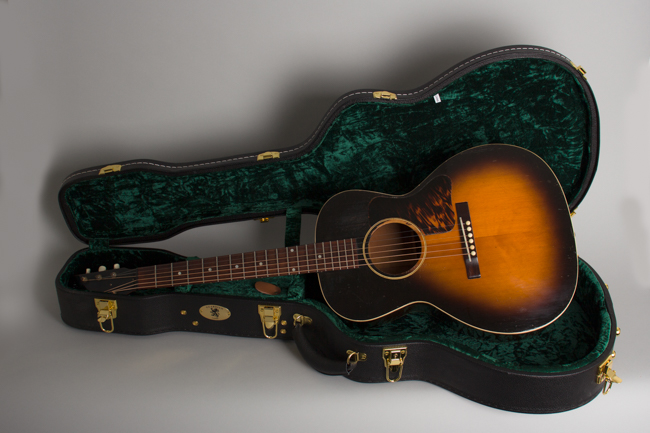 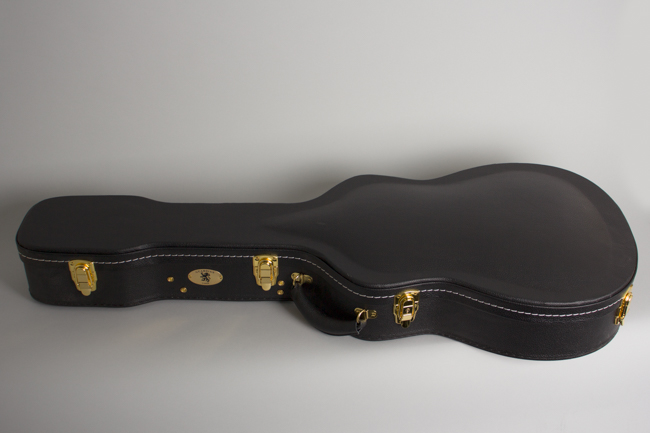 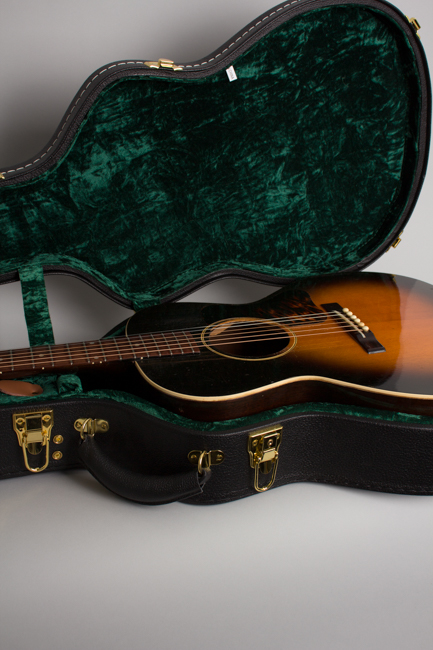 The L-00 has remained one of Gibson's most popular Depression era guitars, from the 1930s right up through today. While this model was close to the bottom of the company's flat-top line in the late 1930s, it offered a great value in sound. When this example was built in 1939 the list price was $30.00, without a case. At the time the L-0 model had just be re-introduced at $25, with a black finish which moved the sunburst L-00 up a step in the line. While this L-00 shows signs of long use it has less play wear and repair than many, surviving in nicely original condition.

The top finish is a blended sunburst with a deeper orangey center, larger than in the years before as is typical of later 1930s guitars. There is single-ply white celluloid binding around the top and back edges, the top is ornamented with a "firestripe" tortoise celluloid pickguard and a three-ply sound hole ring. The back and sides are finished in dark mahogany, as is the fairly sharp "V" profile neck with an unbound, dot inlaid rosewood fingerboard. The headstock carries a white stenciled "Gibson" logo on the face (which is somewhat worn away on this example) and simple openback unplated Kluson strip tuners.

The L-00 was a working-class standard of the day, a truly professional grade guitar made of high-grade materials sold at a price affordable to blues players, Hillbilly string bands, and many other itinerant musicians as well as the student customers Gibson's originally intended it for. Each one of these guitars has its own character and this one is great-sounding both finger- and flat-picked, with a powerful ringing tone that never gets harsh. This is generally well preserved, very good playing example; many of these pre-war Gibson flat-tops have been heavily used and often amateurishly repaired. This one has seen some action but still survived better than many!

This L-00 shows some general wear and careful repair to keep it ticking in the 21st century, but remains an excellent playing and sounding instrument. The original finish shows general wear, though far less than many, with dings, dents and scrapes overall. There is pickwear on the top concentrated in the areas below the fingerboard and on the lower lip of the soundhole, where it slightly is into the wood. The bottom edge of the lower treble bout on the top has some fairly deep scratches that have been touched up a bit. The back and sides have typical but not too heavy wear and the back of the neck is worn down a bit along the spine. The white stencil "Gibson" script has been partially polished off the headstock face

Amazingly enough there are no cracks on the guitar except a tiny spot on the center seam behind the bridge, a state of preservation somewhat unusual for the lightly guilt Gibsons. The original rosewood bridge appears to have been cut down a bit but still retains good height; it does not appear to have ever been reglued. The original small maple bridgeplate has had a thin maple patch added over the pinholes and has a small hole drilled in it as if for an undersaddle pickup. Oddly enough there are no signs of an endpin jack added so this remains a mystery!

The neck has been reset and the original frets polished out. There is some wear to the fingerboard in the lower positions but nothing that affects playability. The original early Kluson strip tuners are intact with later correct-style buttons, and still work fine. This is a fairly bright and punchy sounding example of this modest Gibson classic, an excellent blues fingerpicker and fine all around small body guitar. It lives happily in a more modern HSC. Overall Very Good + Condition.
×