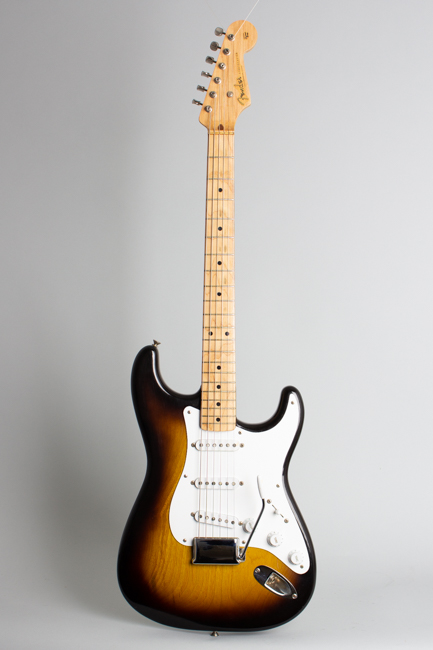 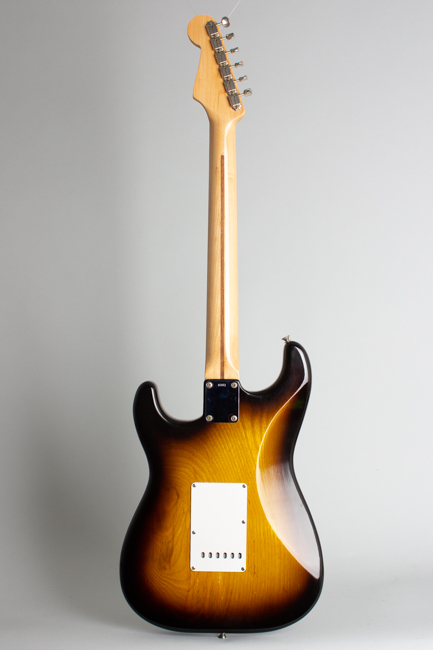 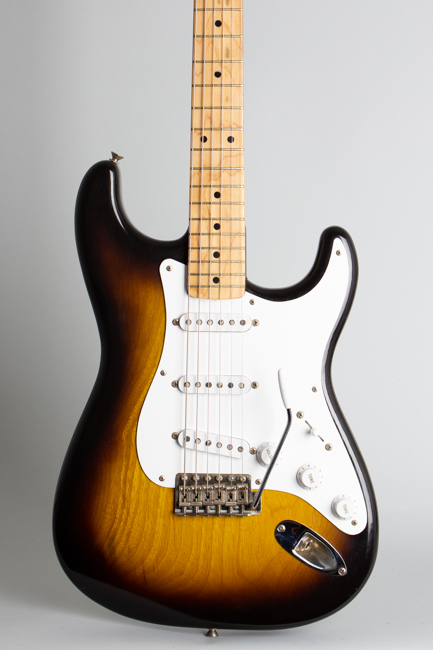 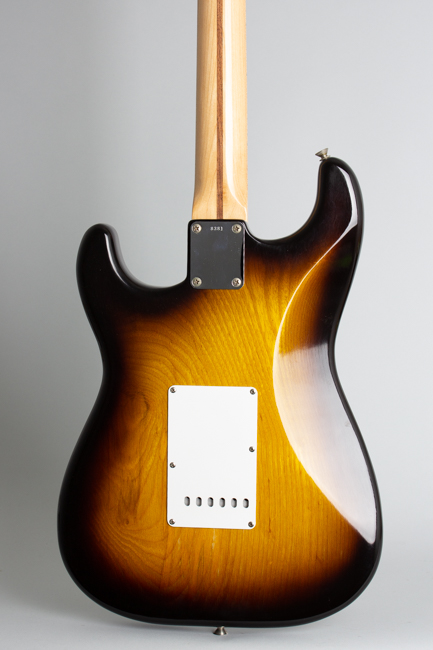 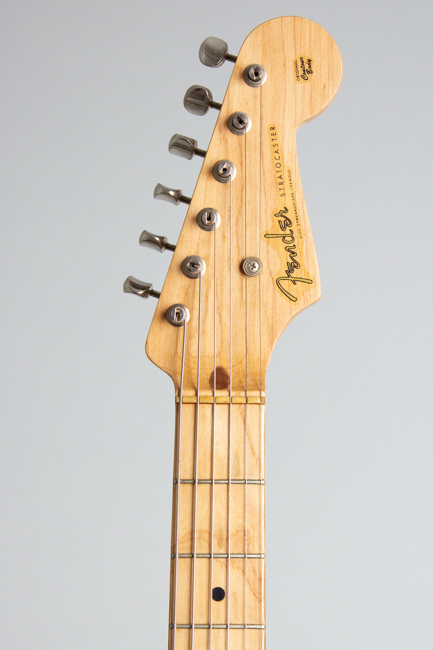 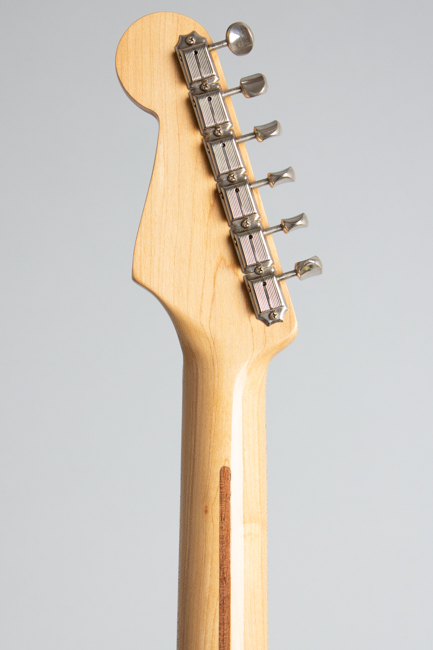 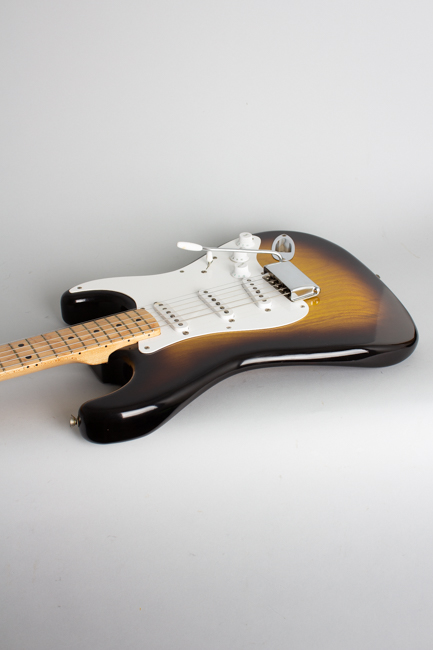 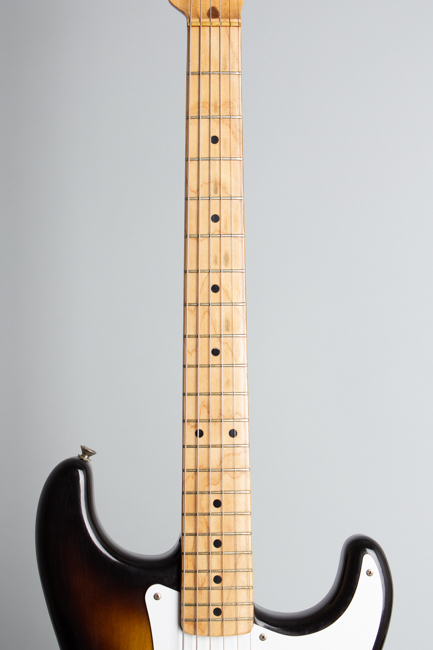 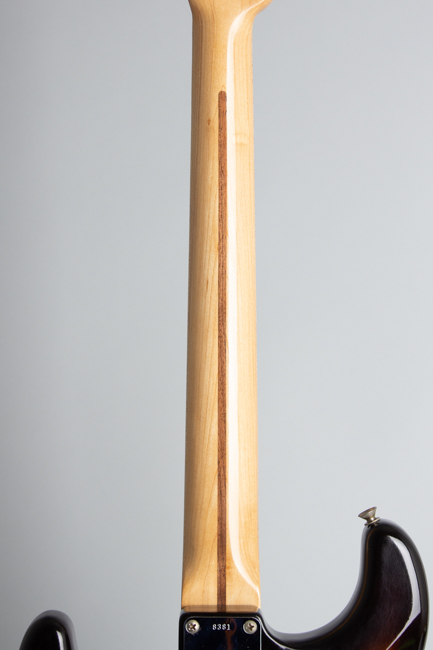 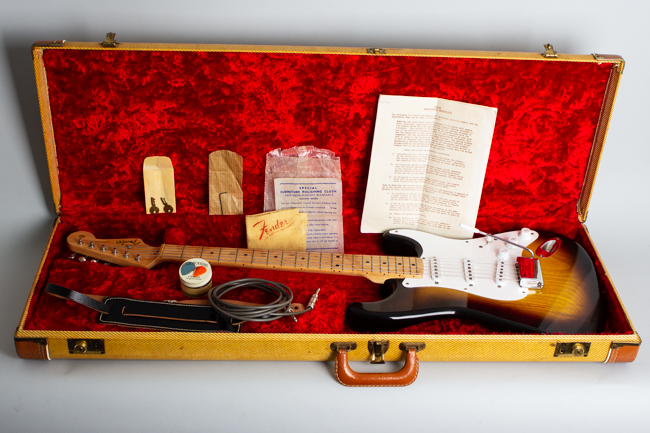 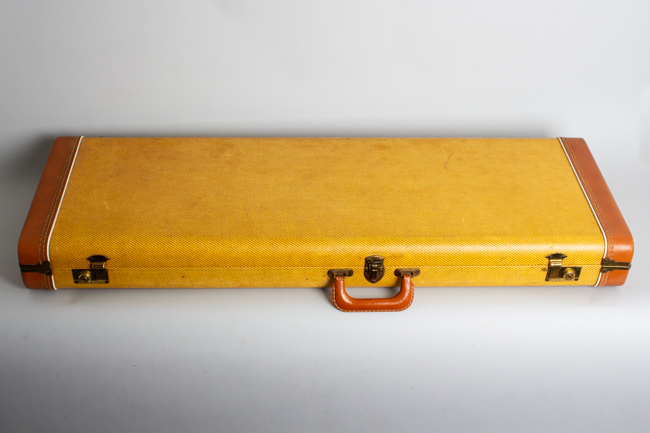 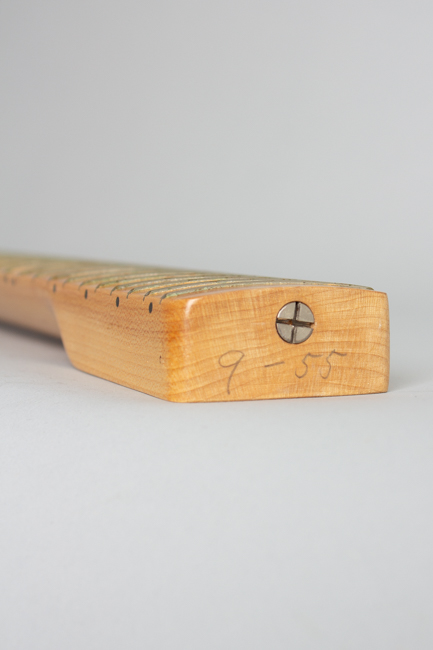 This is a truly stunningly well preserved example of a very early Fender Stratocaster, absolutely the cleanest from this period we have ever had the pleasure of offering. The number of original Pre-CBS Stratocasters that have survived in this kind of condition is miniscule, and as the years go on becoming ever smaller. This guitar is dated in pencil on the neck heel 9-55 and on the body in the trem cavity 8-55. It was wired up and the pickguard installed by Mary on 9-21-55 (her masking tape tag is in the electronics cavity) and the visible pot dates are to the 23rd week of that year.

When this guitar was assembled just about a year had passed since quantity production of the Stratocaster commenced in the second half of 1954. Some early examples were released in the previous spring, but the model was still being tweaked at the factory until the fall. While full production data has never been widely published, according to Fender guru Richard Smith only 357 tremolo-equipped Stratocasters were officially registered as shipped in 1955, following up on 268 in 1954. Even allowing for samples and artist instruments that may have slipped "out the back door' at the factory, this is an astoundingly small quantity by any later standard.

This Stratocaster carries most first-generation features of the model. This includes the single layer white plastic pickguard, earlier style plastic pickup covers and knobs, round string tree on headstock, Kluson Deluxe tuners with no name on the casings and the old style "Spaghetti" logo decal. The beautifully grained and contoured one-piece ash body has a lovely deep 2-tone sunburst finish. The one-piece maple neck has a round backed "C" profile with the hint of a dressed-away shoulders from the first to fifth frets, a harbinger of the V-necks to come. It is finished in very thin clear lacquer which has virtually no yellowing. The original frets are very small, thin wire by later standards.

This is simply a superb and very early example of probably the single most influential electric guitar ever designed. At a time when guitars were fairly conservative-looking, this instrument must have looked like it just arrived from the Stratosphere indeed! The Stratocaster is such a futuristic design that it hardly seems possible this guitar has just passed its 66th birthday, looking like it was just shipped months, not so many decades ago.

While not absolutely a mint-condition instrument, this early Stratocaster is in far cleaner and less played condition than the vast majority of vintage Fender guitars. The very thin lacquer finish on both body and neck shows hardly any fade or discoloration, for the most part the only wear is some small handling marks visible. The back shows a couple of small moisture spots off the bottom of the trem cavity but no flaking or chipping anywhere. The lacquer on the fingerboard has some playwear marks down to the wood along the center, really the only evidence the instrument was played at all. The very small original frets show only the most minimal wear and some light corrosion. The fragile over-the-finish decals on the headstock are close to perfect.

The only repair to the instrument is one that is becoming ever more typical on vintage Fenders as the components age. The middle pickup has been recently expertly rewound by NY Fender zen master Norio Imai. This was accomplished by disconnecting the coil at the grommets on its base (don't try this at home, kids) so none of the other wiring was disturbed. Norio is a master at this particular operation and now all three pickups are nicely balanced and sound great, even the rubber grommets under the screws remain original and not ossified. The original three-way switch has a very solid feel, easily selecting the "in-between" tones easily for some truly righteous Strat sounds.

Overall the hardware is as clean as the finish; the neck pickup cover has a small spot of discoloration and tiny check lines on the treble side tip but other than that the fittings appear hardly disturbed. The numbers on the knobs have acquired the greenish tinge usually seen, but the much of the color in the tone and volume markings on the top still shines gold. The early single layer pickguard is practically perfect with no shrinking or distortion. Internally the components are so new-looking it is hard to believe they have been sealed up in there for 67 years; well the masking tape wrapped around the pickup leads has yellowed somewhat. The trem springs show a few spots of corrosion, the bridge components and tuners are also very clean if not absolutely mint. The original bridge cover, trem arm and back trem cover are all original and close to perfectly preserved as well.

This guitar is still set up with period (possibly original) nickel-wound strings that are quite heavy by modern standards. The bone nut was cut a hair too low on the D and G strings and this has been neatly patched in inconspicuously. A small wooden shim has been added at some point to the neck pocket, which could be removed or replaced if desired. As it stands the guitar plays very well as Leo and his crew intended, with the heavy twang of the era and is perfect for Buddy Holly strumming or Eldon Shamblin licks. It could of course be easily set up in a more modern mode to the next owner's specs. which we are happy to do as requested.

The guitar is sonically and visually a trip back to 1955-6, unaltered except for the perfect pickup restoration and complete in its first generation "knuckle buster" side pocket tweed case. This has some light external wear but nothing major, and is also far better preserved than most from this era. A bevy of case candy is present including the black leather strap, cord, bridge wrench in waxed paper envelope, case keys in their envelope, Fender polish cloth with instructions in its waxed paper envelope, a couple of old picks in a shoe cream jar and most amazingly the original, quite detailed multi-page instruction sheet from Fender for stringing and adjusting the then-novel and unfamiliar trem system. We have seen many old Stratocasters over the years, but handling this stunning survivor is the closest thing to taking the Way-Back machine we have encountered in a very long time. Near Mint Condition.
×