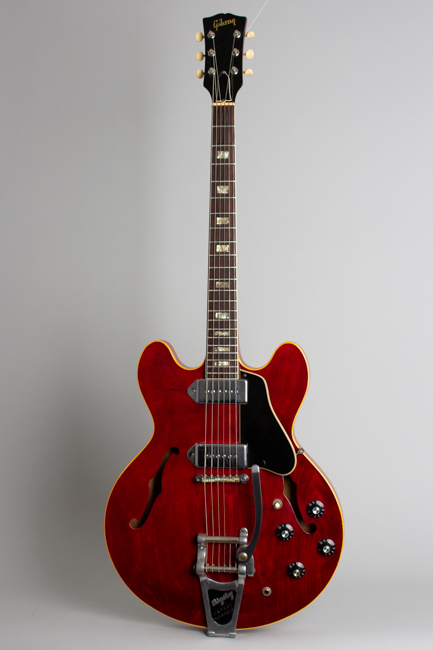 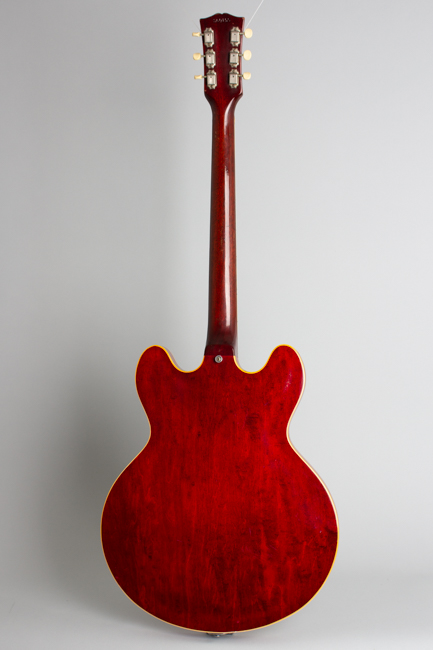 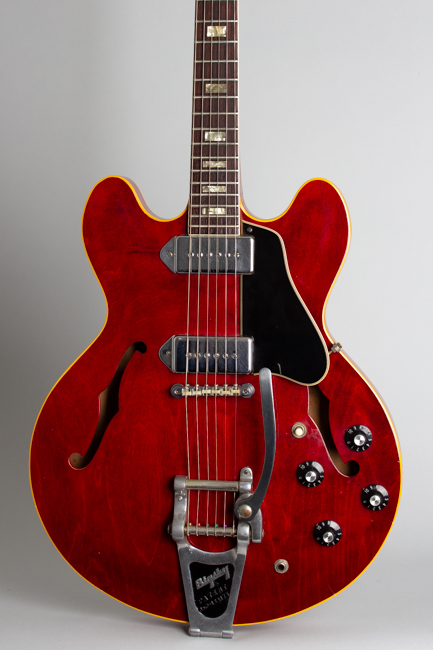 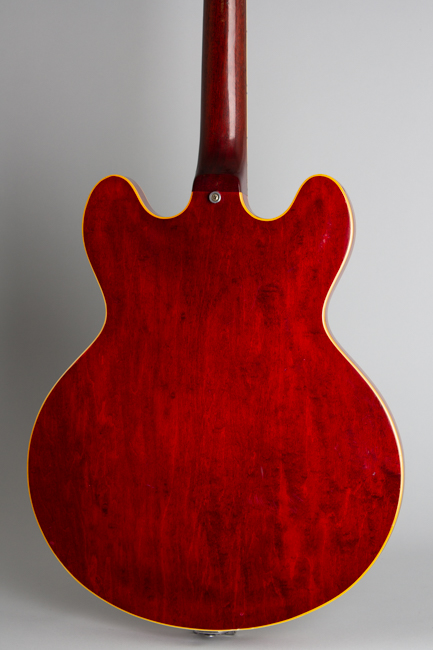 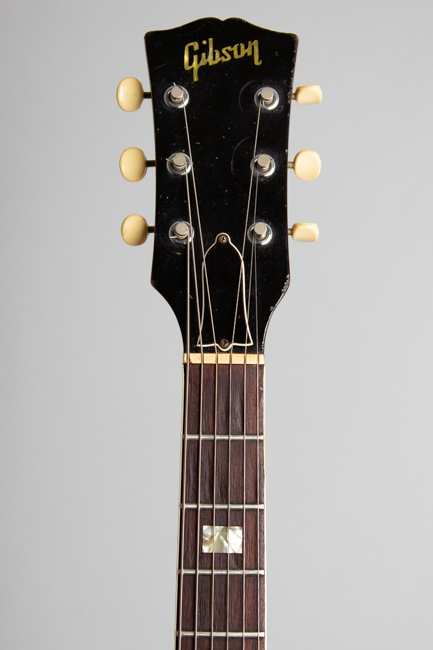 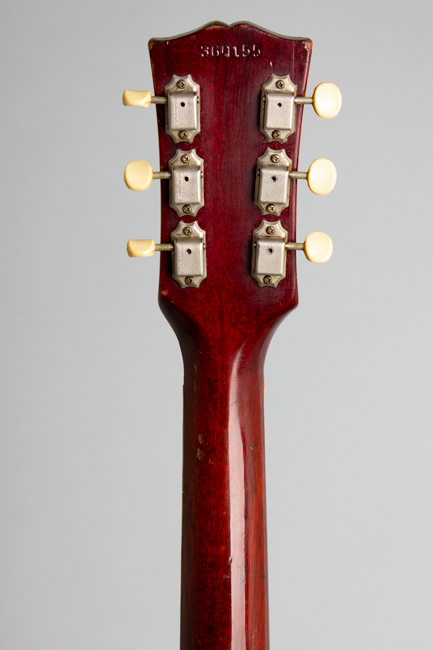 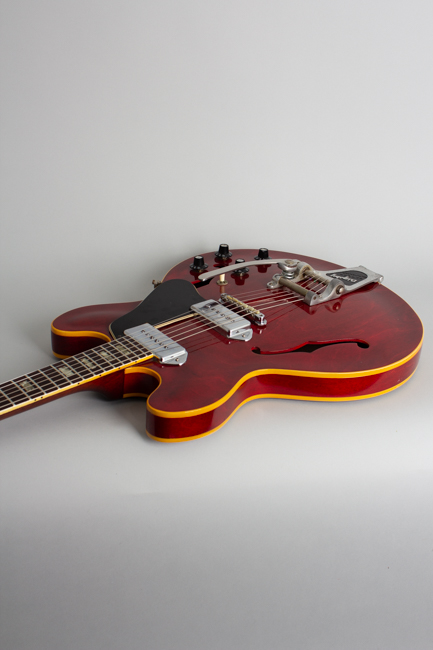 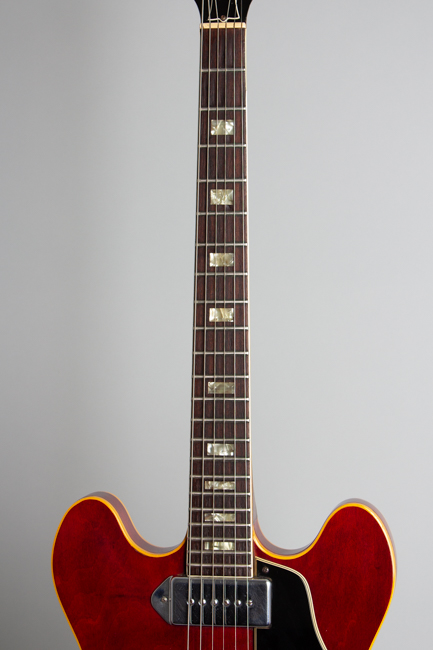 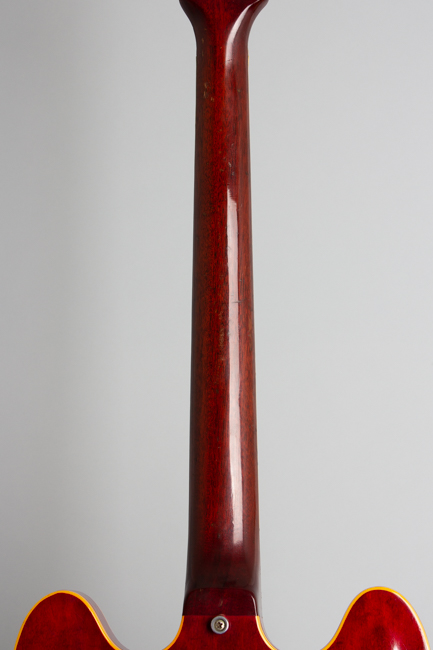 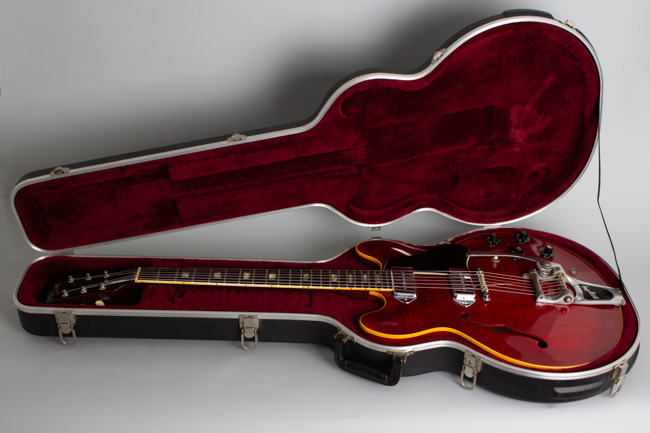 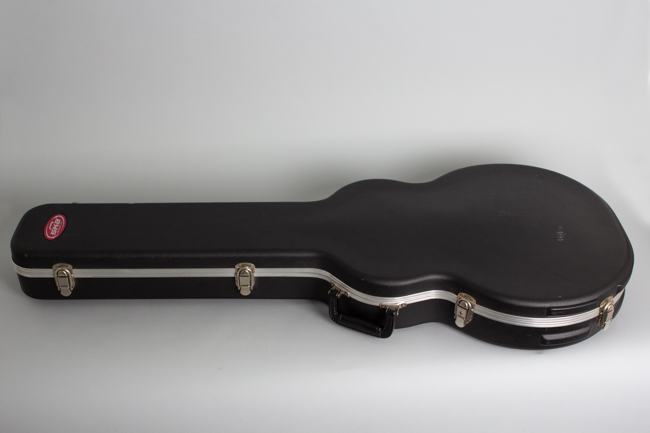 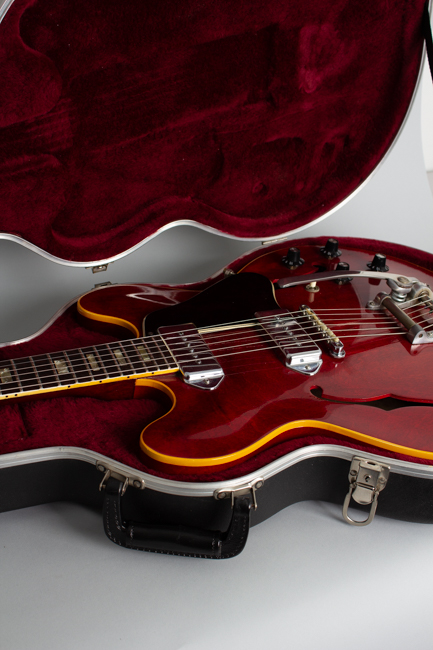 This is a nice example of the final original version of Gibson's classic double cutaway thinline hollowbody, the ES-330TD. This one has the added bonus of a correct period Bigsby tailpiece, adding another dimension to the instrument. This guitar has a notable oddity beyond the Bigsby; while it is definitely a 1968-70 instrument, the serial number is correct for either 1965 or 1974-5. This is most likely an example of Gibson's warranty repair policies; if an instrument was too severely damaged to easily repair, the factory would stamp the customer's registered serial number on a new instrument and return it. Imagine the surprise getting a this guitar back if you sent out an earlier 330 with a 16th fret neck joint! We have seen stranger --- or -- possibly this is just another Gibson serial number anomaly!

At any rate whatever the backstory with this guitar, it exhibits the major design modification the ES-330 underwent in 1968: the neck joint was shifted from the 16th to the 19th fret, making it feel and play more like the semi-solid ES-335. This of course greatly improved fretboard access, and thus is one of the few examples of some players preferring the later 1960's version of a Gibson instrument to its earlier incarnation! The combination of the fully hollow thinline body with the extended fret access is quite rare in a Gibson.

Other features on this ES-330 are standard for the late 1960's including chrome plated metal parts, "Witch hat" style knobs and the very thin (just a hair over) 1 1/1/2" nut width used in the late '60's. This guitar has a lovely deep transparent cherry finish overall, with single binding on the body and a bound, block inlaid rosewood fingerboard. The two P-90 pickups are controlled by the standard Gibson one switch, four knob wiring.

These "long neck" 330's were only in production for a few years and are rare compared to earlier 1960s examples. The ES-330TD in general is a great sounding very versatile guitar, one of Gibson's most adaptable designs. This model been heard in many styles of music since the instrument was introduced in 1959: Jazz great Grant Green used ES-330's extensively on his most well-regarded early-1960's recordings, as did many other jazz, blues and R&B artists. The 330 and its nearly identical sister guitar the Epiphone Casino were featured in countless '60's British invasion bands, including the Beatles, Rolling Stones, Kinks, Manfred Mann and many more.

This guitar is in generally nicely preserved condition overall, looking played but well cared for over the past 50+ years. The original finish shows very nice color with hardly any fade, it does have some minor dings, dents and scuffs overall but no large areas of wear. The back of the neck has a couple of small but noticeable deeper dings behind the first fret area, and the treble side binding has been replaced there from the nut to between the first and second frets.

All hardware is original and complete. The chrome plating shows just some minor wear. The Bigsby may not be a factory installation but is of the period and appears to have been in place since new. The Bigsby tailpiece baseplate is cracked on the bass side, but as this version also screws directly to the top this does not cause any functional issues.

The original frets have been crowned down a bit and there is some light divoting to the fingerboard in the first position, but nothing that affects play. Overall this is a great sounding example and a super player, a bit of a mystery perhaps but a lovely instrument no matter what its exact history. A modern molded HSC is included. Overall Excellent - Condition.
×