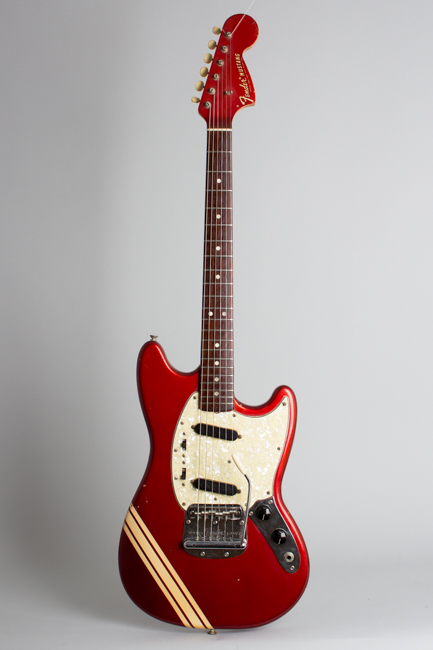 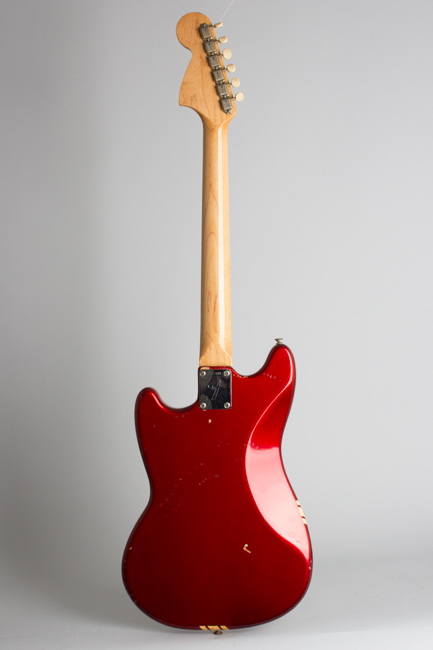 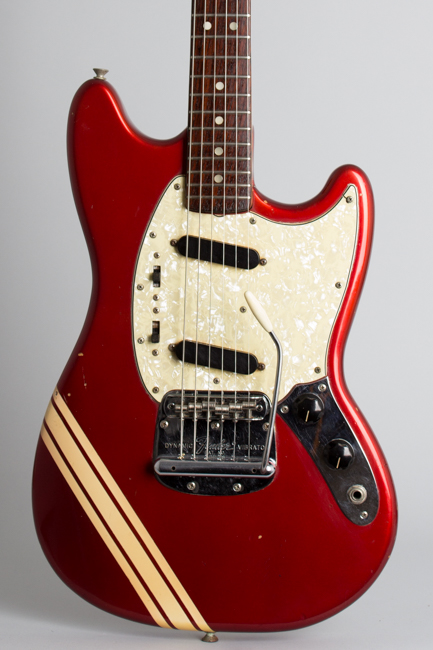 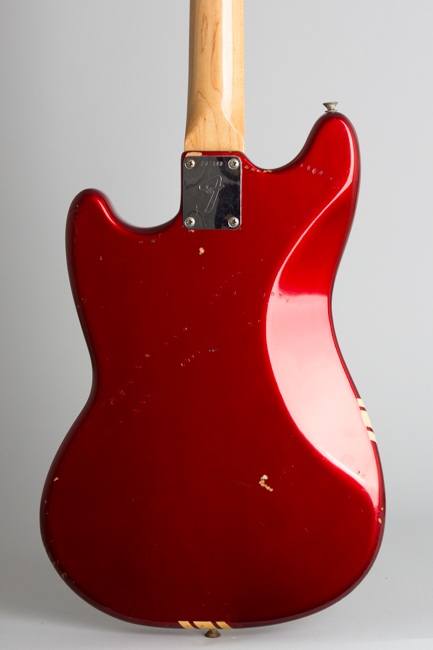 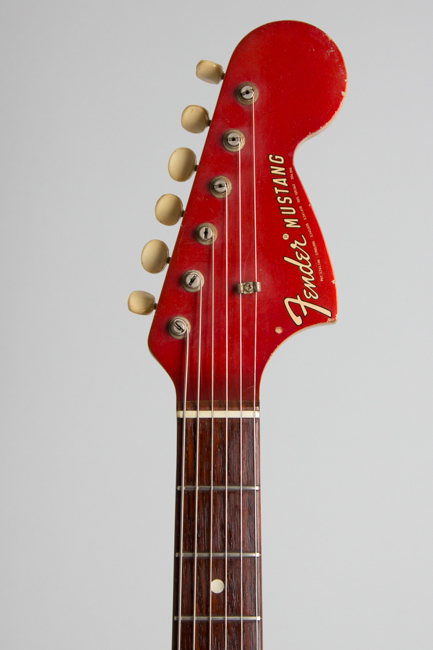 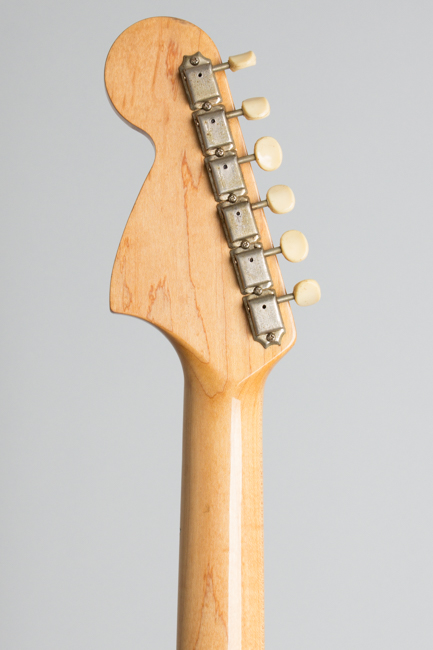 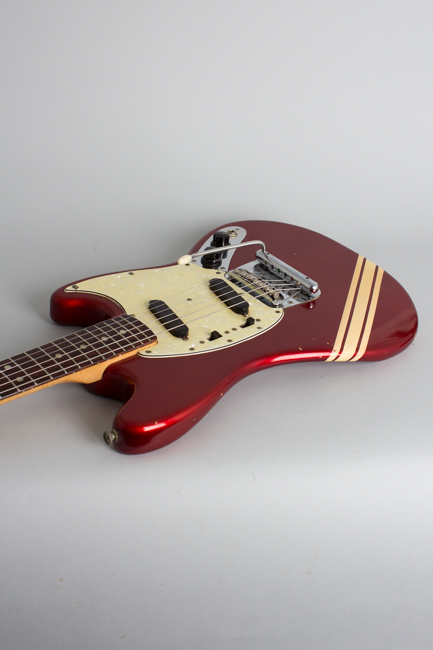 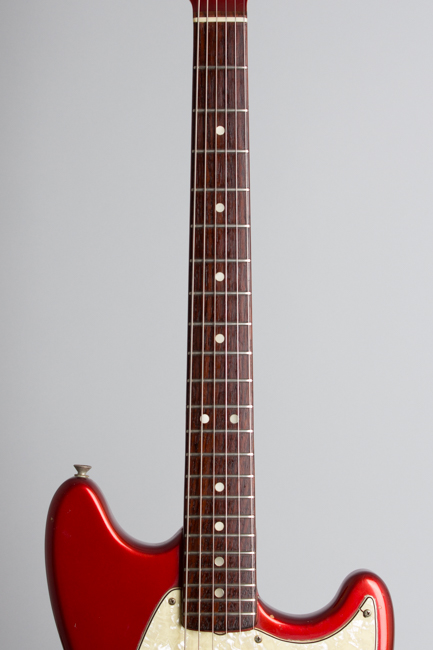 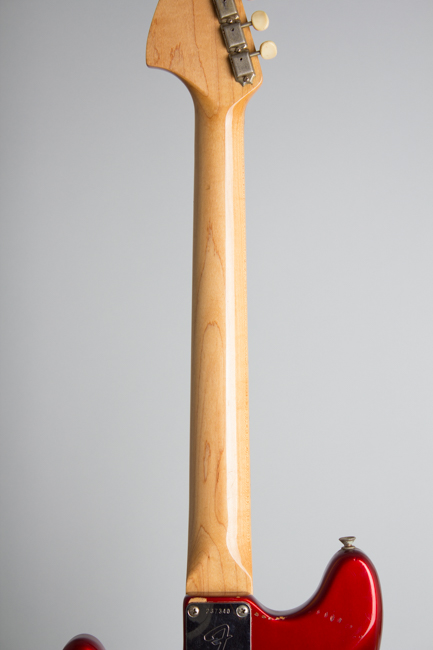 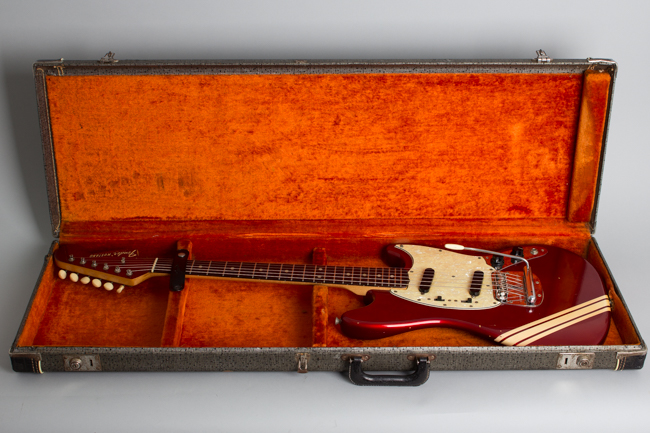 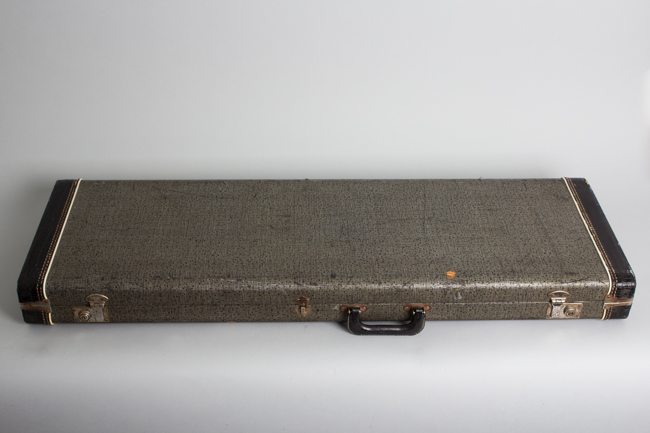 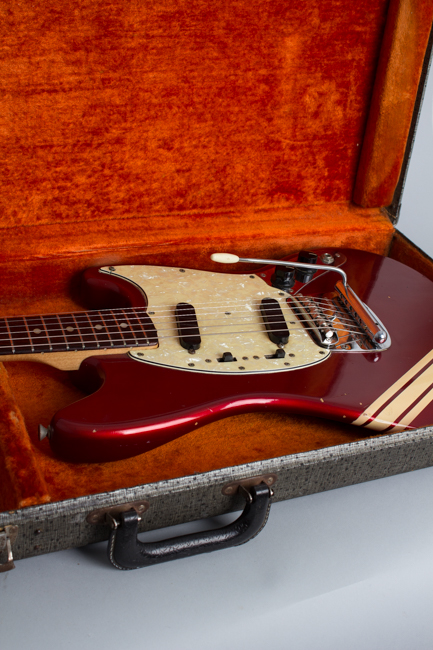 This is a nicely original and generally well-preserved Competition Red Fender Mustang, completely unaltered appearing played but not abused. This guitar was built near the beginning of the run for the rather whimsical "Competition" version of the model Fender introduced in 1969 to freshen up the model's appeal. The Candy Apple Red metallic "car" finish and "racing" stripe on the body (and a snazzy matching headstock) were meant to evoke the car culture "The kids" were thought to be digging at the time.

This one has a neck stamped MAR 69B and pots dated to the 42nd week of 1966, marking it as part of the first wave of the new style and one of the last of the cool original 1960s models. The Competition Mustangs were only available for a few years from 1969 into the early '70s and while not overly rare instruments are not nearly as plentiful as earlier mid-60's versions. Only the first year or so examples were finished out with the matching headstock, making this one an even snazzier find!

Originally introduced in mid-1964, the Mustang series was Leo Fender's last major original design for the company that bore his name. Although intended as a student model, the easy handling short scale guitar with vibrato has been used by many professionals over the decades since and endured as a classic in its own right. The Mustang has proved a timeless favorite of countless garage and pro bands from the 1960s and '70s until today, easily exceeding Leo's original intentions as a simple but effective student instrument.

This guitar is original and unaltered, showing some general wear to the finish but complete except the snap-on bridge cover is long gone. The finish has a nice patina but does show a number of dings, chips and dents overall. The deep red Candy Apple Metallic lacquer on the body and headstock has retained a very good deep color muted a bit but without too much fade.

The pickguard has one tip partially cracked, but overall shows less shrinkage than most of these. For some reason the lower strap button is very corroded, but the rest of the hardware is fairly clean. There is some very minor fingerboard and fret wear in the lower positions, but not enough to affect playability. The original case is solid showing some general wear. Overall this is a nice example of one of CBS/Fender's cooler late 1960's ideas. Overall Excellent - Condition.
×