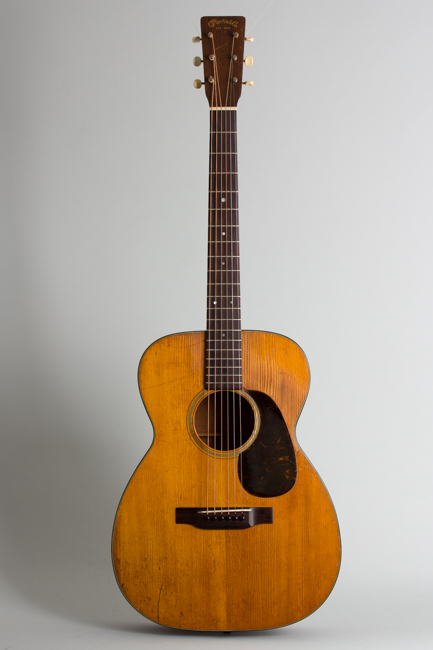 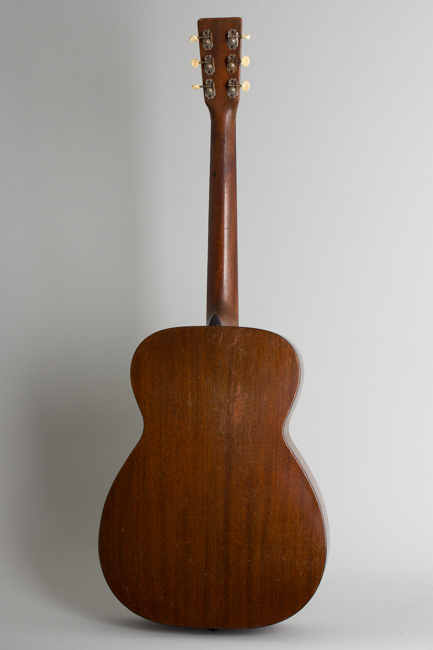 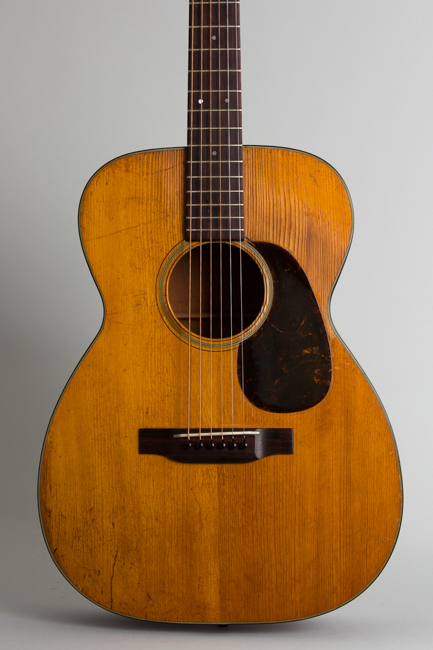 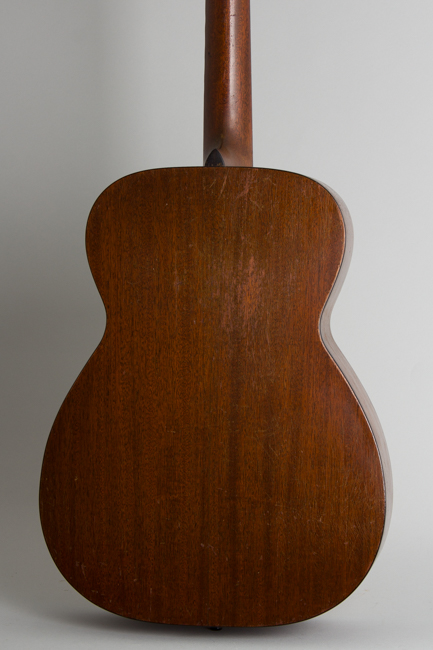 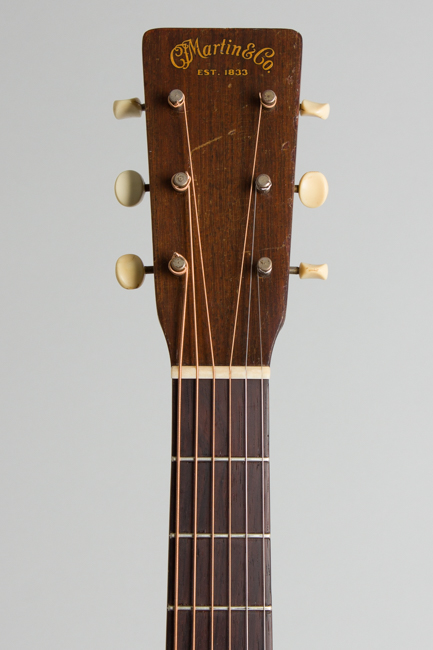 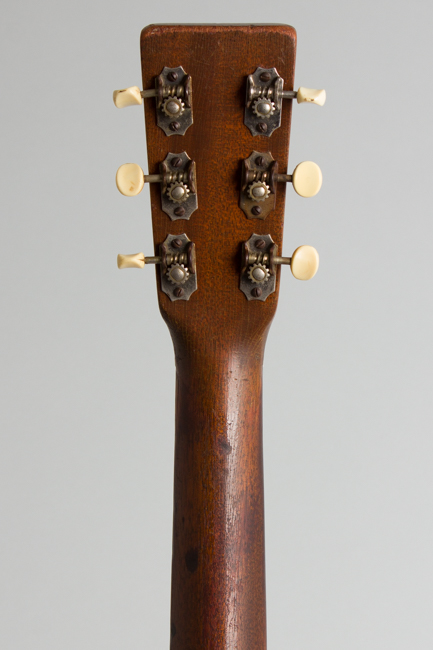 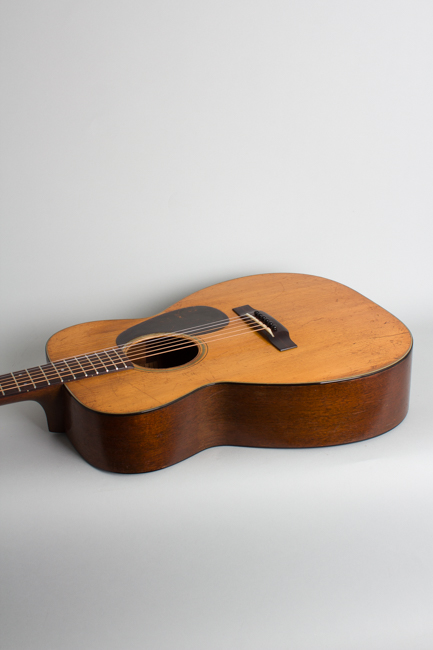 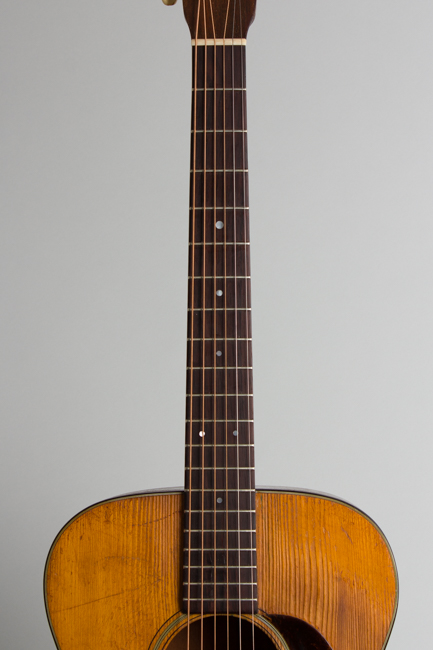 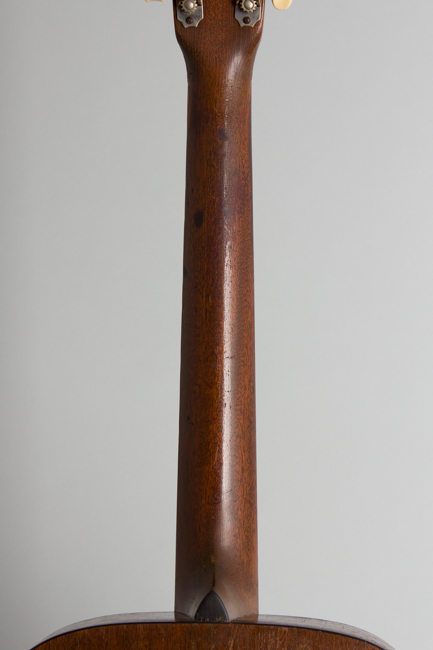 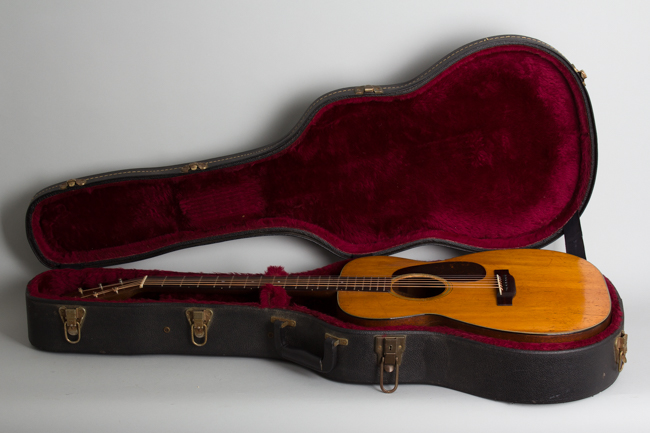 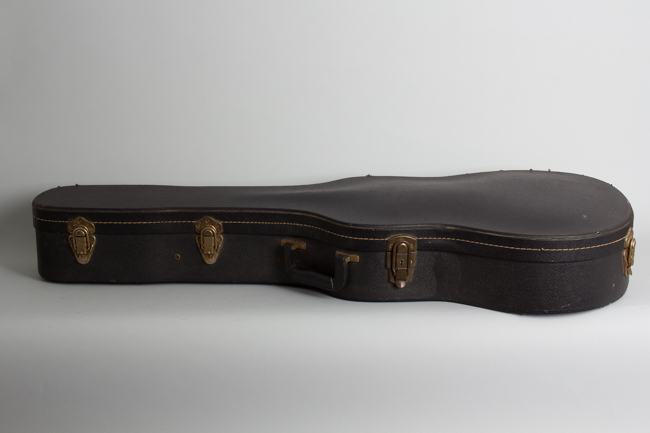 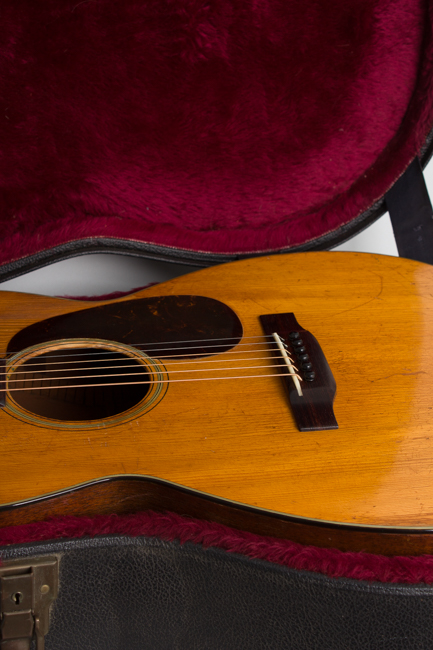 While the 00-18 is generally not one of Martin's rarer creations, to many players and flat top fans the model constitutes one of the company's most propitious combinations of wood, wire and inspiration. This well-worn 1944 guitar's mahogany body and scallop-braced Adirondack spruce top makes for very light and superbly responsive instrument. Interestingly enough this one JUST slipped in under the wire on that feature; According to the latest research Martin stopped scalloping the main X brace on most guitars just around the time it was built! A peek inside confirms this top retains the beautifully arched braced and tone bars with the graceful scalloping that was about to disappear for decades.

This 00-18 was made in the second half of 1944, one of a total of 425 shipped that pivotal year of the Second World War. Compared to Gibson, Martin managed their materials very well during the war years and maintained a surprisingly full production schedule. This 00 incorporates typical wartime features, most notably the ebony neck re-inforcement that replaced the metal rod due to restrictions on civilian use of critical metals. The individual tuners are austere wartime Klusons with plastic buttons, thin baseplates, riveted gears and no bushings. Standard 00-18 features include the 14 3/8" wide mahogany body with dark celluloid binding, dot inlaid rosewood fingerboard and gold C.F. Martin decal on the rosewood-faced headstock.

While not a particularly expensive guitar by 1940's standards, listing at $55.00 (plus case) this 00-18 still represented a fairly substantial investment to most players. This is not a flashy guitar; the trim is discreet with tortoise celluloid on the body edges and a simple multiply soundhole ring. In classic Martin style, the elegant understatement speaks for itself. Despite its smaller size body and lack of flash this was a fully professional-quality instrument fully suitable "for broadcasting or stage work".

n the years since, Martins of this era have become the benchmark for all subsequent acoustic guitar designs. By modern standards the 00-18 is on the smaller side but even so this is an extremely versatile instrument. The scalloped bracing really makes a major sound difference on smaller bodied guitars, and this instrument has a wealth of sound not evident even on most 00's from later in the decade. At just a hair over 3 Lbs. this is one of the lightest 00's we have had. Both as a creative tool and as an object of beauty and grace, this is just a well-played but wonderful example of Martin's best.

This is a distinctly well-played but still nicely original "genuine relic" guitar with some repair work but in fine structural shape and an excellent player. The finish shows some fairly heavy checking overall and a large helping of strum wear to the top, with areas worn into the wood on the upper bout, as well as on the rosette around the pickguard. The bulk of the pickwear is up near the fingerboard, from the old "cowboy strum" area. The top/side edge shows wear and some minor flaking to the lacquer from contact with the player's arm. There are a couple of deep scratches but no top cracks.

The back has heavier checking and quite a bit of wear through the finish. There is an area of repair along the back/side edge on the lower treble bout where it looks like an old impact caused a number of short cracks; all have been sealed up with a minimum of finish disturbance. Another tight grain split along the center of the back has been properly sealed. The sides also show heavy checking to the lacquer and some dings and scrapes, with another impact spot resulting in several cracks along the lower bout on the treble side.

The back of the neck is worn down to the wood in some spots and has a number of shallow dings and dents, but less capo wear spots than some with no deep marks. A very small strip of rosewood and mahogany looks to have been long ago spliced in to treble side of the neck by the nut to fill out a spot worn down from years of steady wear. This is fairly inconspicuous. The finish on the entire instrument remains original with no overspray or even notable touch up, which considering the wear and repair history is kind of amazing.

This guitar has had a thorough maintenance re-conditioning for optimum playability with a neck reset, period correct refret, new aged bone nut and saddle. The original small bridgeplate is intact and undisturbed, and the original bridge had previously been reglued. Internally, all of the original delicate braces remain perfectly intact. The original wartime tuners still do their job.

We don't know where this guitar has been and who played it over the last 75+ years but it has survived with its feel and sound fully intact, a pure featherweight tone machine set right and ready for another 75 years or more. It is housed in an older but not period hardshell case. Overall Very Good + Condition.
×