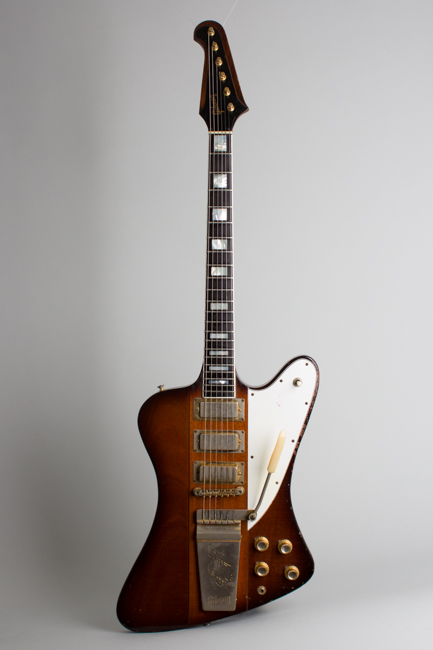 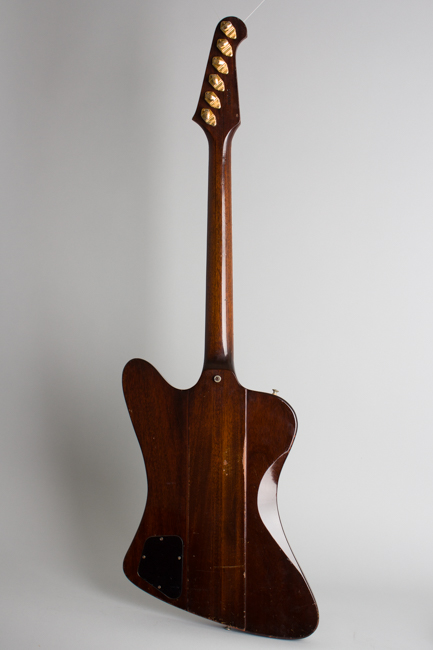 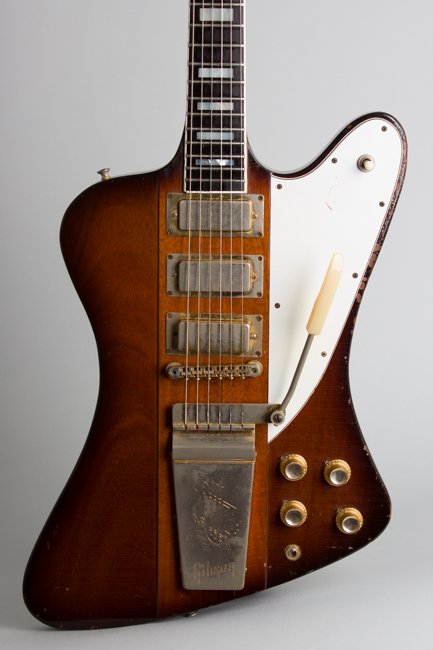 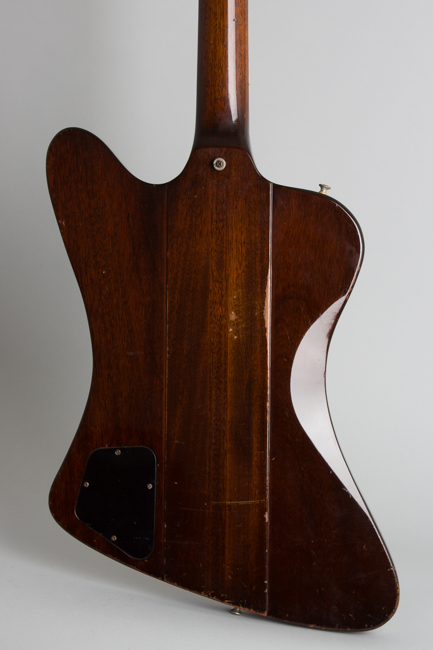 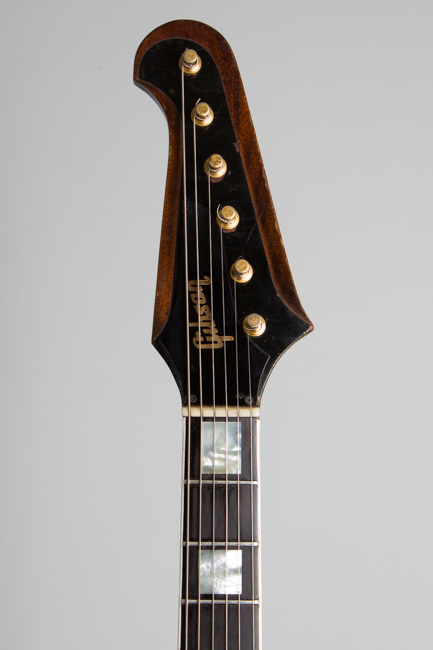 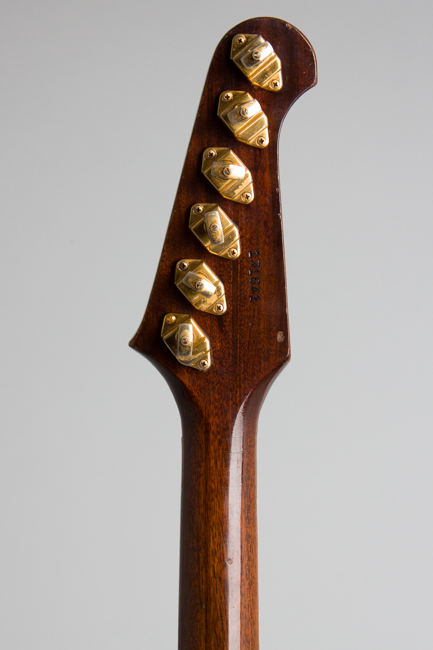 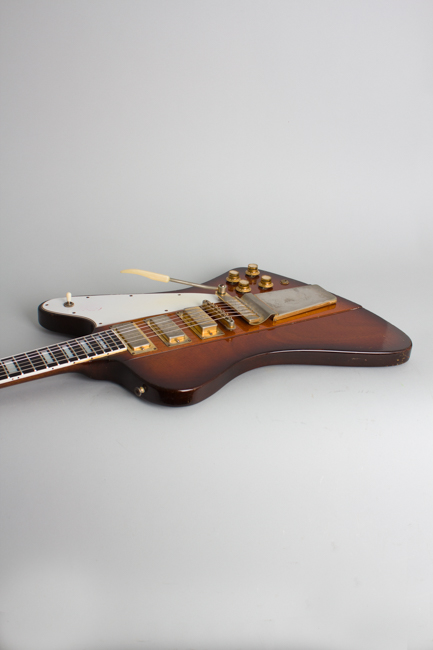 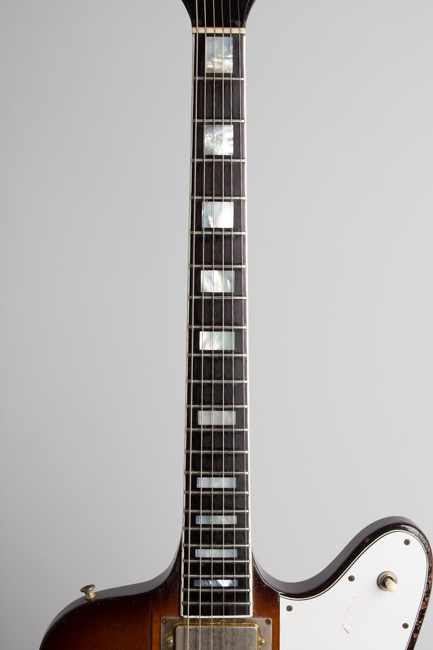 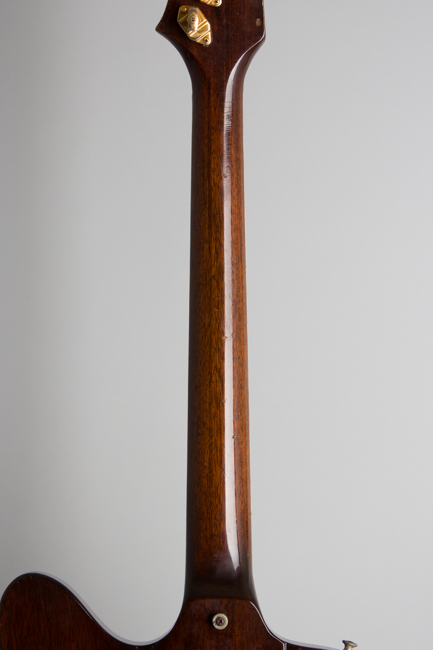 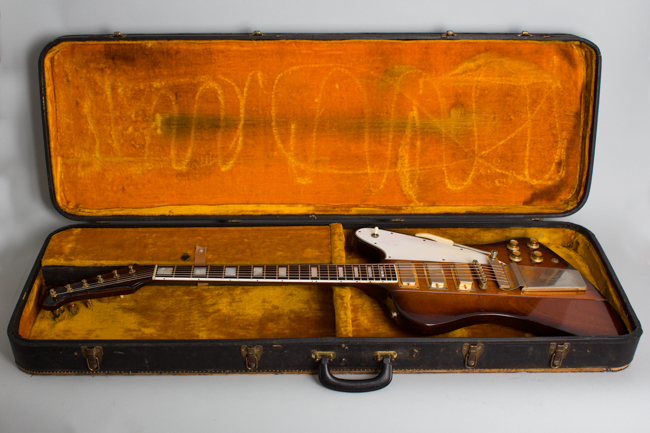 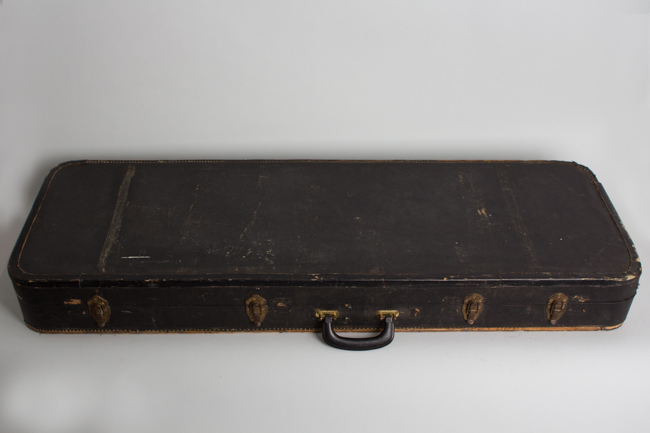 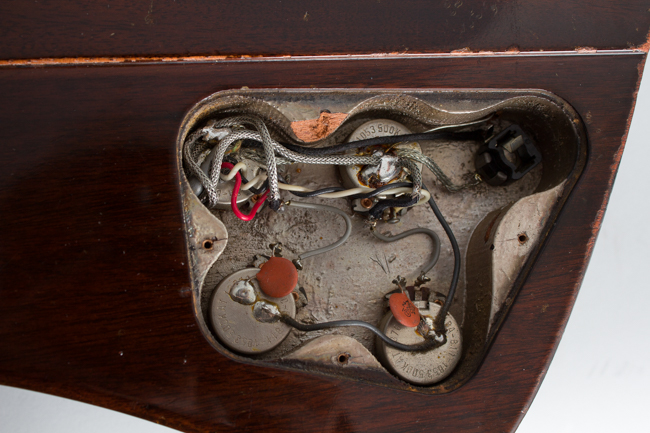 The ghost of Brian Jones may be hovering in the room when this guitar is present! This is a somewhat worn but super vibey example of one of his signature instruments, the rare 1964 "reverse" Firebird VII. This instrument was the top of the short-lived new Gibson solidbody line introduced in late 1963 and discontinued just after the July 1965 NAMM show. The very expensive VII model was produced in the smallest quantity, with 173 shipped in 1964 and an estimated only 200 or so of this original version ever made.

The first pattern "reverse" Firebird is considered a 1960s classic with its futuristic sweeping lines and innovative through-body neck construction topped off by the unique "backwards" sculpted headstock with individual Kluson banjo tuners. The limited production time meant these models barely had a chance to get established in the market before being replaced by the more conventional "non-reverse" version, which was greatly simplified for ease of production. The originals have been a sought-after guitar since, re-issued, revamped but never really equaled in the Gibson pantheon. The bottom of the line Firebird I (associated with Cream-era Eric Clapton) and top-line VII (most seen with the Rolling Stones and Jones in particular) are the rarest and most sought-after versions.

The Firebird VII is the highest grade model of the original 'birds, with a similar set of features to the Les Paul/SG Custom. The bound, block inlaid ebony fingerboard is the defining element, along with three mini-humbucking Firebird pickups and gold-plating everywhere. Much of the hardware and layout is otherwise shared with the next model down, the Firebird V, but the VII is a much more deluxe looking and feeling instrument. Other fittings include a long Gibson Vibrola tailpiece with the lyre-engraved cover and plastic-tipped handle paired with a Tune-O-Matic bridge.

The pickguard covers just the lower horn and carries the 3-way selector switch; it is also decorated with a nifty Firebird emblem. The wiring on this VII model is typical of three-pickup Gibsons, with the center pickup only used in the middle switch position to create an out-of-phase combination with the bridge unit; the other available selections are neck or bridge alone.

Practically everything about the original Firebirds is unique; the long laminated neck-through-body centerpiece with "wings" glued to the sides, the fluid body shape with the longer lower cutaway horn and that headstock with the tuner buttons hidden from the front and the low E farthest from the nut. The neck is generally bigger than the contemporary SG series with a relatively chunky feeling but comfortable round-backed profile.

The original Firebirds hardly had a chance to establish themselves in the market before the model was drastically revamped. A threatened lawsuit from Fender is often cited as the reason, but it is more likely the complex design simply proved uneconomical to produce. The elaborate sculpting of the body and headstock and the eccentric neck-through construction make for a beautiful instrument, but one that was difficult for Gibson to build on a cost-effective basis.

Despite use with a number of major bands of the day these beautiful birds flew off into oblivion way too quickly. A set of Firebird VII's was given to the Rolling Stones in 1965 and featured both live and on many of their period recordings including the infamous fuzz line in "Satisfaction". It was subsequently mostly seen with Brian Jones, who continued to use the model for much of the rest of his career. Sets of VII's were also seen with the Lovin' Spoonful and the 4 Seasons at the time, but less frequently. In the 1970's Ron Wood sometimes featured a VII with the Faces, and it became the signature instrument of Roxy Music's Phil Manzanera, in a super striking Cardinal Red finish.

It's estimated that about 200 of the original "Reverse" Firebird VII were produced between late '63 and mid '65; many have suffered cracks in the headstock area and/or been played heavily or modified. This all-original 'bird has been played and loved but is a splendid survivor as well as a great all-around guitar with a unique and powerful sound.

This guitar shows a decent amount general wear and tear but no major damage or alterations. Most importantly the headstock has no breaks or cracks, which Firebirds are unfortunately prone to. The finish has checking overall, most heavily on the face, and numerous small chips, scratches and dings over the instrument. The treble edge of the body has a pattern of circular marks that occur when lacquer is exposed to heat; this is fairly heavy but is confined to the side of the lower forward 'wing' of the body. The back has some typical buckle wear and the body edges show some worn away spots. The back of the neck has some small dings and dents but the finish is not much worn through.

The ebony fingerboard has been refretted with period-appropriate wire. The nut is old but likely not original, the fretboard binding has been reglued in spots but does not appear replaced. The pickguard is the correct period piece but we believe it is an old replacement, as the heat pattern on the lower body makes it unlikely the original was left unscathed by whatever affected the finish there. It shows just a bit of the typical pickguard shrinkage, with the engraved and painted bird emblem mostly rubbed away but the engraving still visible. The gold plating shows a lot of wear as would be expected, being mostly worn off the tailpiece and pickup covers. .

The wiring appears all original with pots dated to the 43rd week of 1963. This guitar has a very good neck angle (critical on a neck-through design) and playability is excellent. The original case is included; it is VERY worn but has been re built and is fully functional. All the latches are replacements ad most of the vinyl edging is gone, but it still holds this magnificent 'bird safely. Overall Very Good + Condition.
×