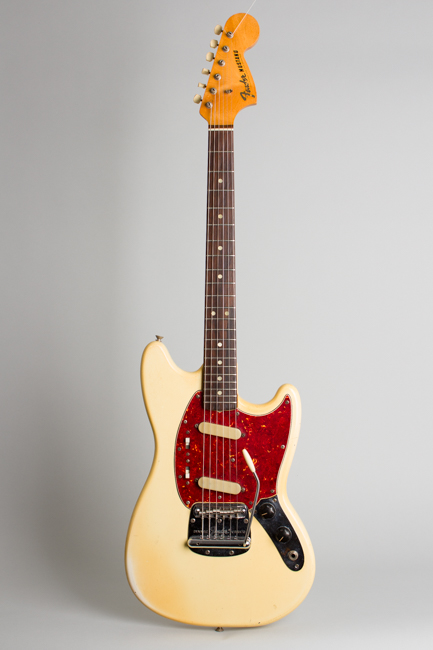 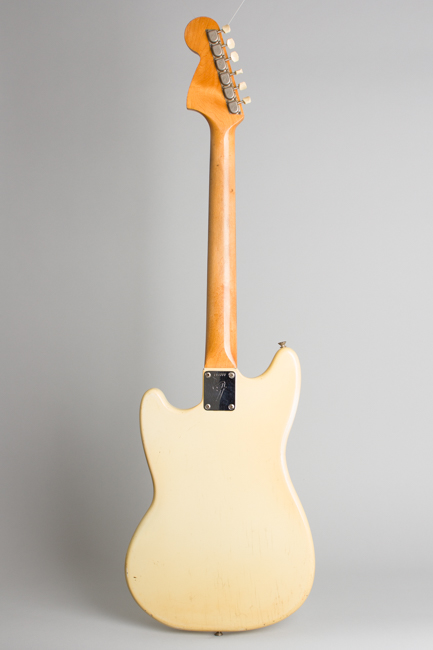 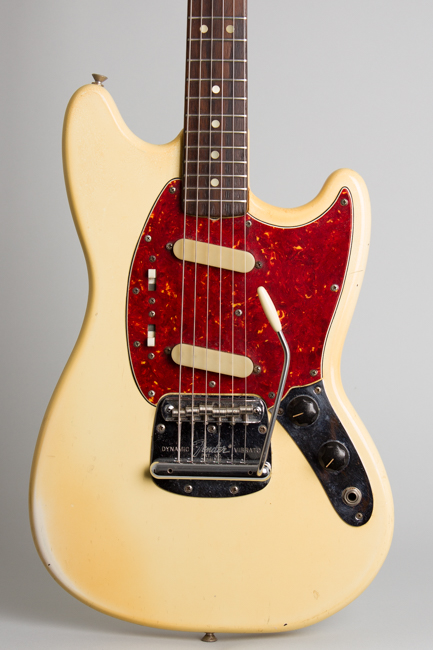 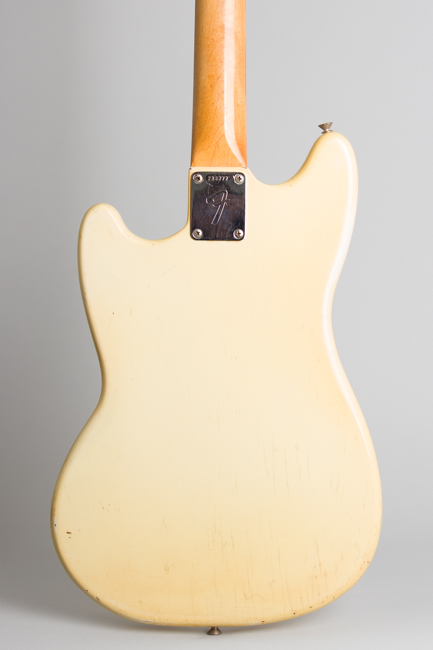 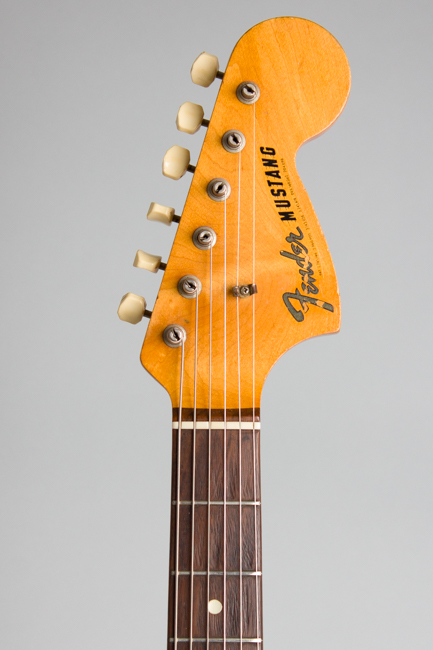 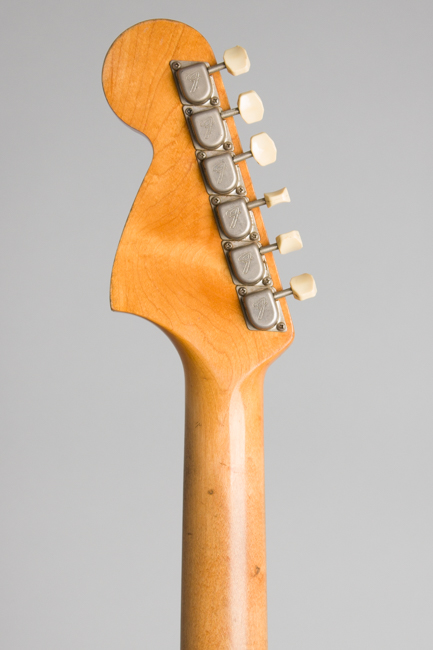 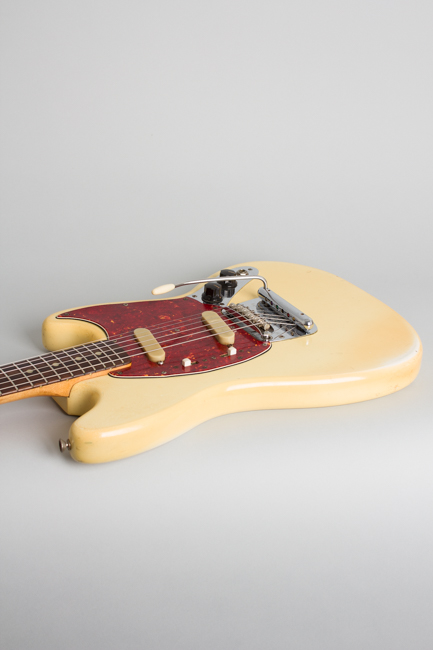 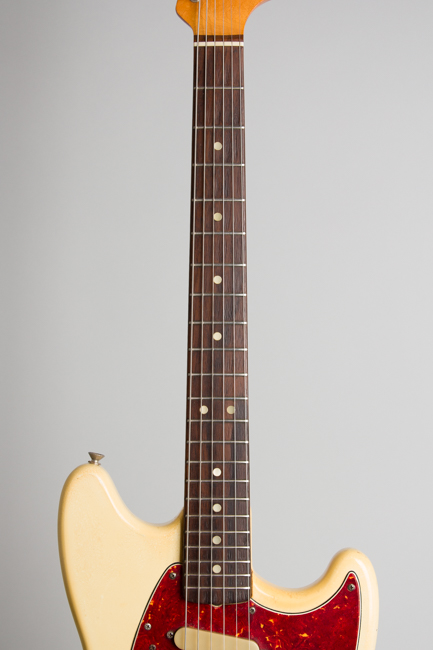 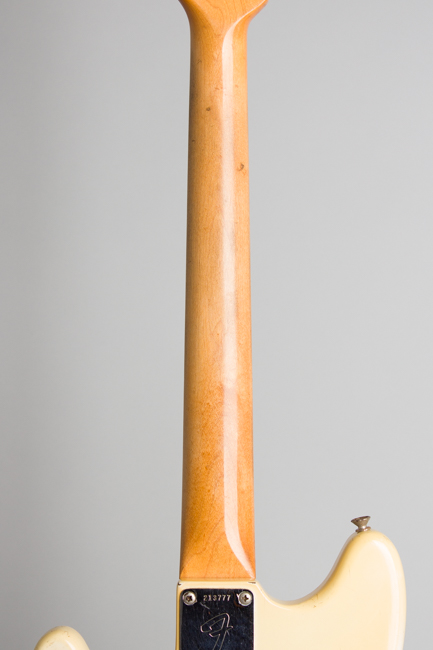 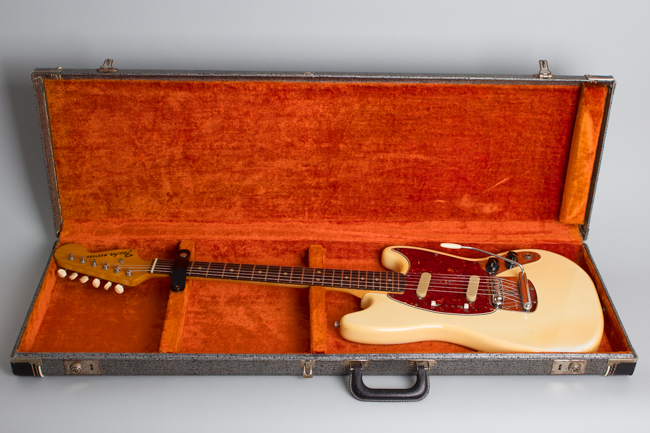 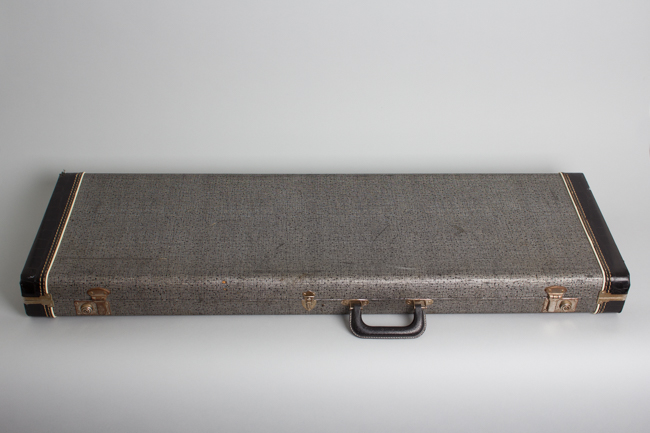 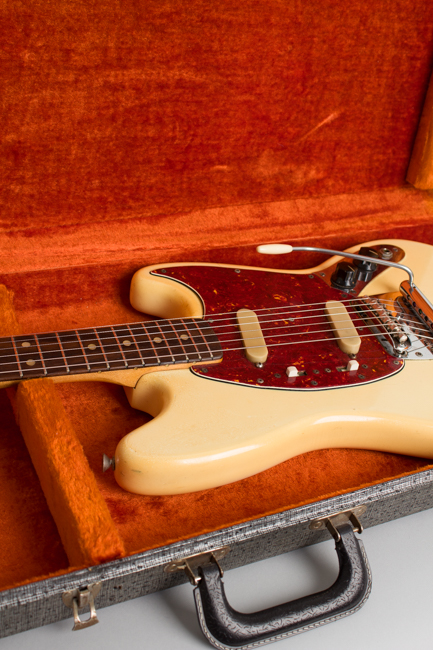 This white-finish 1968 Fender Mustang shows some general wear but remains all original, and an excellent player. The Mustang was Fender's classiest 1960s student guitar, basically the same as the Duo-Sonic II with the addition of the new "Dynamic vibrato" tailpiece and a floating bridge. The two single-coil pickups are controlled by individual switches allowing in and out of phase combination, with a master tone and volume control.

This example is from early 1968, a year that Mustangs are far less common in than their incredible peak in 1966 when over 16,000 were sold. The neck is stamped MAR 68 so the guitar was likely assembled and sold later that spring. The pots are dated to late 1966, common as CBS bought a huge lot that year that lasted into the early 70s. This guitar's body sports a white lacquer finish, with light yellowing turning it a more off-white shade. The pickguard is 3-layer laminated plastic with a tortoise shell pattern top layer.

Unlike some other Fender instruments the Mustang shows no really notable changes over this period; The finish is still the plain lacquer without a sealer coat used since 1964, with the neck and decal also unchanged since the beginning. The pearl dots appeared in early '65 and the plastic button "F" tuners in '66, but really the Mustang changes very little from its introduction until 1969, when the upgraded (cosmetically at least) Competition model appears, complete with racing stripe!

The Fender Mustang was instantly successful on introduction and by 1966 arguably the most popular electric guitar in the world, at least in terms of units produced. It has proved a timeless favorite of countless garage bands and even pro players since, through the 1960s and '70s until today. This is a played-in but nicely unmodified 1960s example. Like its contemporary automotive namesake from the same time period the early Mustang remains an American classic and still represents a great value in an original vintage Fender guitar!

This guitar remains all original, showing some finish wear but no repairs or modifications. The body has some checking and crazing to the lacquer, with an area on the top mostly from the upper body horn that appears to have been cleaner or sprayed with some slightly caustic substance leaving a subtly mottled pattern on the surface. This extends over the pickguard a bit; the effect is pretty subtle but noticeable on close inspection. Other than this the finish is pretty clean, with some small dings and dents but no notable worn-through spots. The neck finish is worn down somewhat on the on the back, with small dings and dents and one deeper ding behind the third fret area. There is a bit of flaking to "Fender" part of the headstock decal.

All hardware is original and complete including the trem arm, and the grey HSC; the oft-missing bridge cover is indeed missing. Some of the chrome has minor wear but generally is pretty clean. There is some fingerboard wear mostly in the lower positions; the frets have been crowned down just a bit and the guitar plays very well, with a particularly loosey-goosey whammy bar. Overall not pristine but a nice playing, cool sounding example of this classic over-achieving little Fender, a super friendly guitar with just enough wear to make it a guilt-free gigger. Overall Excellent - Condition.
×