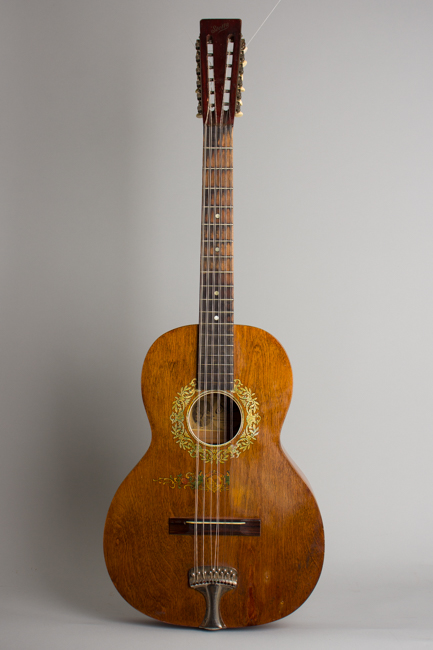 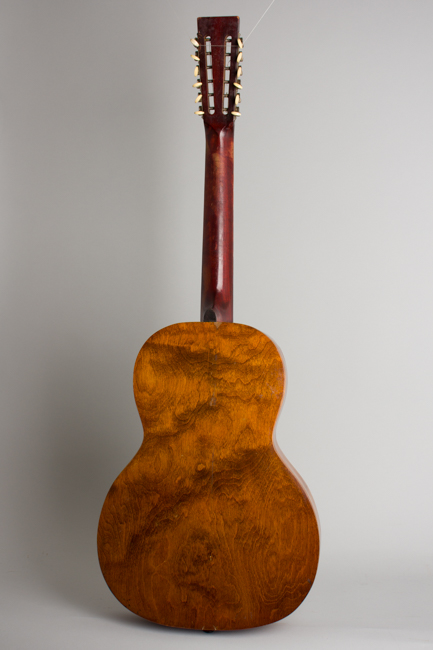 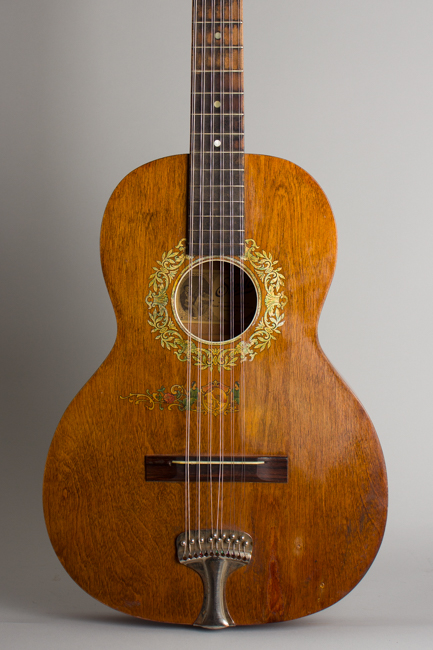 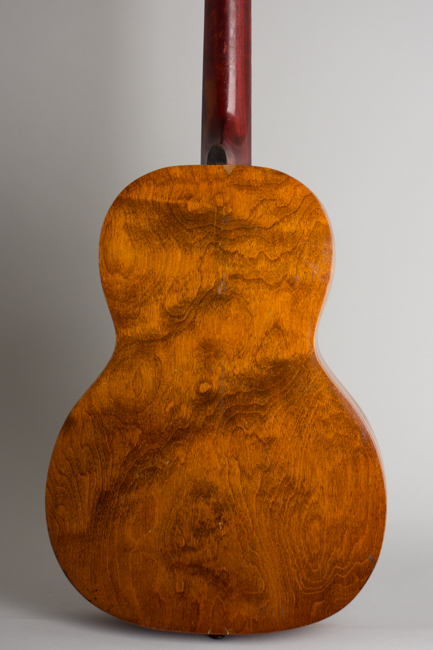 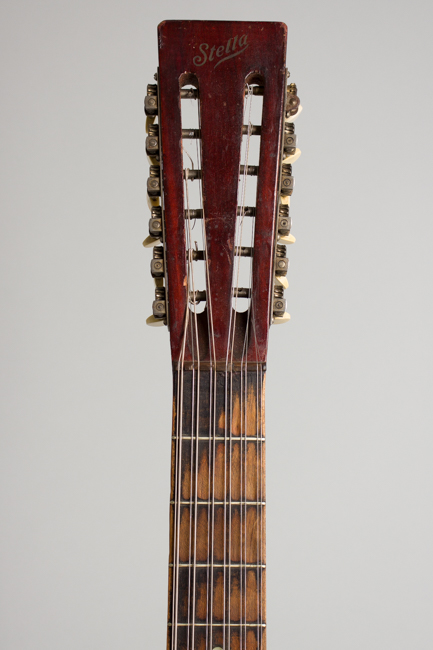 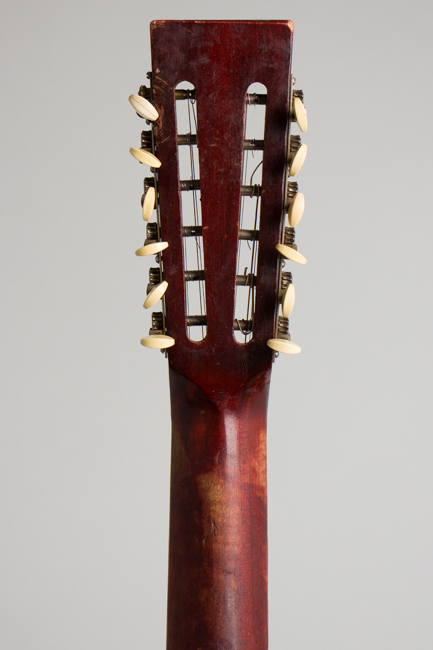 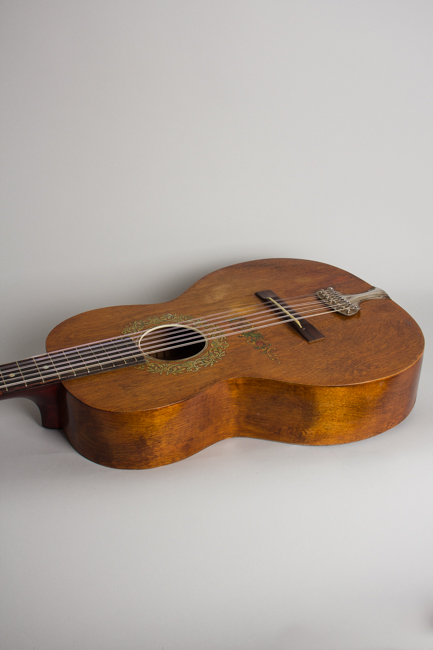 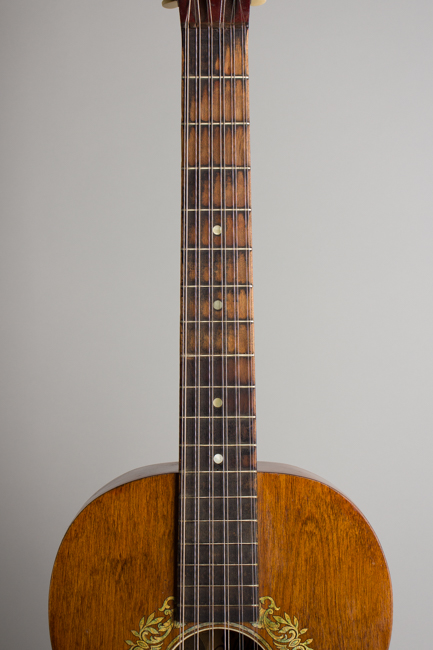 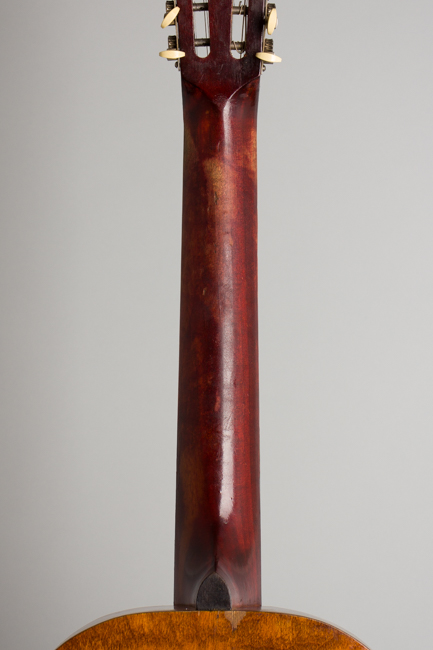 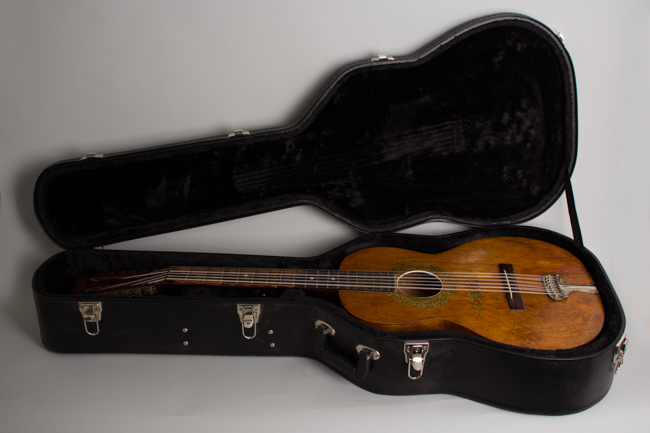 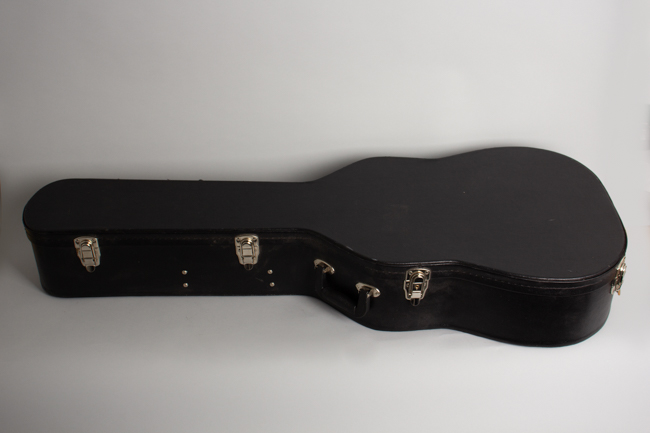 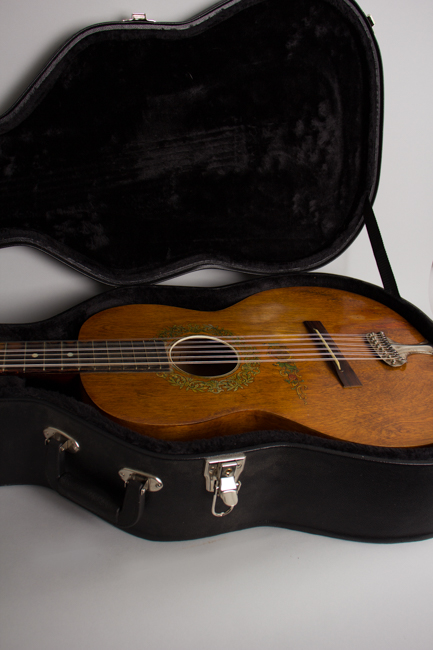 This is a rare and unusually playable example of a smaller body, pre-war Stella 12-string, the instrument of choice for some of the best regarded early blues masters. This guitar was made between the late 1920s and 1935 when the Oscar Schmidt company would be reorganized as "Fretted instrument Manufacturers". The guitar is branded with a gold-filled "Stella" script on the headstock. Internally there is a well-preserved classic paper label with the traditional STELLA graphics stating "manufactured since 1879 Oscar Schmidt-International Corp. Jersey City USA".

This instrument is not a higher-grade Schmidt guitar, but an imposing piece nonetheless. The solid birch top and back are not bound, and the floral soundhole and top decoration are decals. The inner rim of the soundhole is the only bound surface. The internal bracing is typical Schmidt, with a large flat bridgeplate and several substantial ladder braces. These have not been altered as some were in the past. The tailpiece is the original older Stella style with posts to guide the strings, as seen on the 1910's and '20's 12-string guitars.

The poplar neck is substantial but less deep than some earlier examples, with a very soft "V" profile. The thick fingerboard is dyed maple, much of the color having rubbed away over many decades of play. This guitar has a cool midrangey sound, and while well-worn and far from top-of-the-line is certainly an authentic instrument for pre-war blues styles-in fact it looks to have seen quite a history already!

This old Stella has had an eventful life, it shows some scars picked up along the way but has been well restored and is an excellent playing example. There is a lot of wear overall, but with these older Stellas the worn-in look is really part of their charm; "Blues approved" as it were. The top has a large spot worn through the finish below the strings, with a chunk of the decal missing. Below this there are two small patched screwholes (the telltale mark from an old DeArmond Model 56 control box) filled in but visible. Just above this is a spot worn through the finish with evidence of a somewhat awkward touch up long ago. The back is relatively clean with one curious long mark that appears to have been caused by lying on a roundwound string for some time.

The curve of the lower side has a fairly major repair, appearing to involve some sort of bash through the wood re-constructed with a considerable amount of touch up. This is solidly done but quite noticeable. The good news is the rest of the guitar is in batter than average structural condition for one of these, with no other cracks which is at this late date somewhat unusual for an original Schmidt-made 12-string. The top is also in better shape than many, with only some very minor bulging at the center. The original Stella ladder bracing is intact, and the interior of the guitar is actually quite clean.

The neck has been reset, with twin carbon fiber rods installed below the fingerboard to help keep the neck straight. As many afficionados know, finding one of these original 12-strings in good playable condition without major alterations is difficult. This is not an upper grade model but is an excellent player with a powerful sound, barkier and less sophisticated than its spruce top brethren but equally blues-approved. The instrument is tuned to a C#, down 1 1/2 steps from concert pitch and seems happiest there. This is the real deal for pre-war blues fans. Excellent - Condition.
×