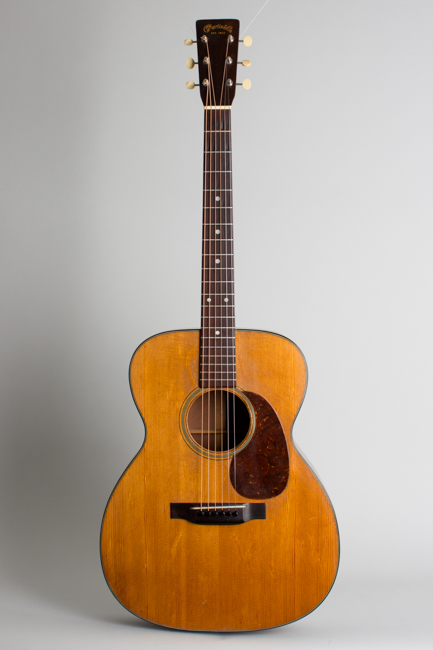 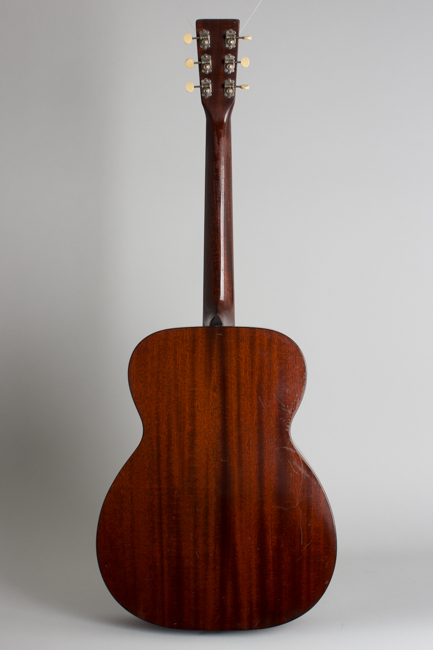 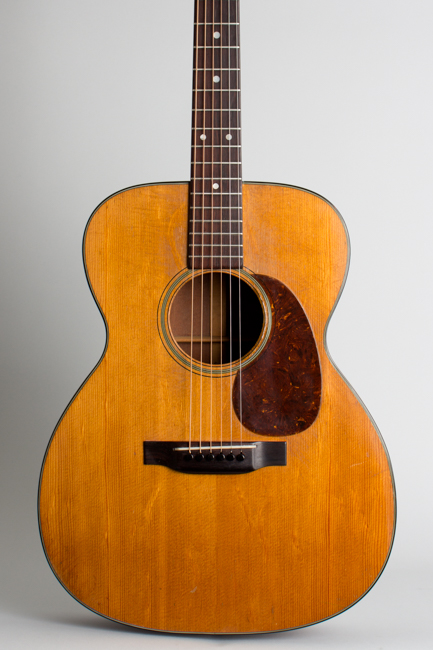 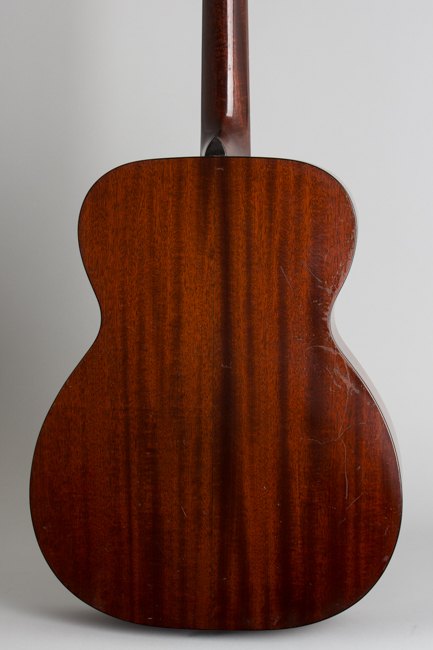 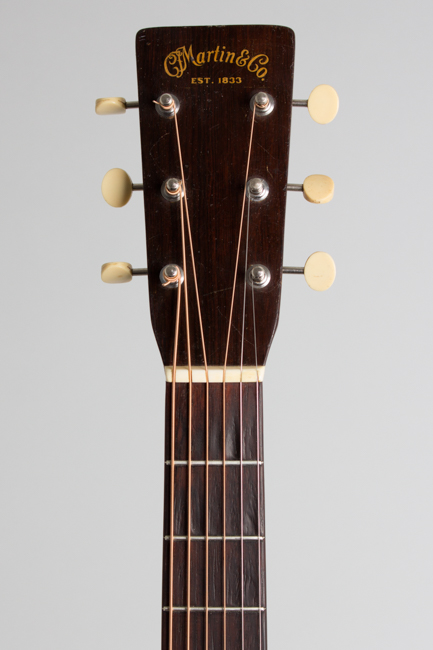 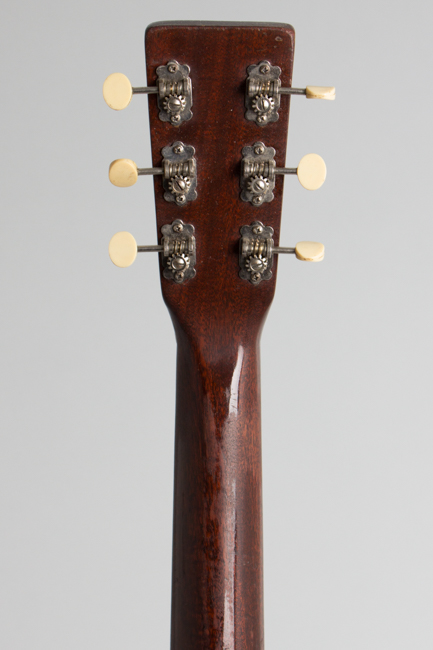 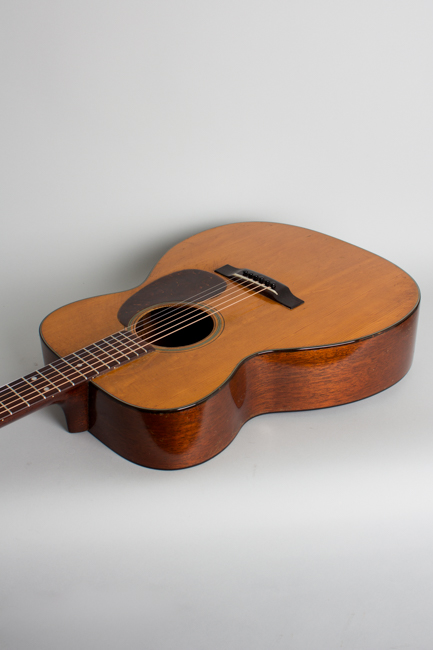 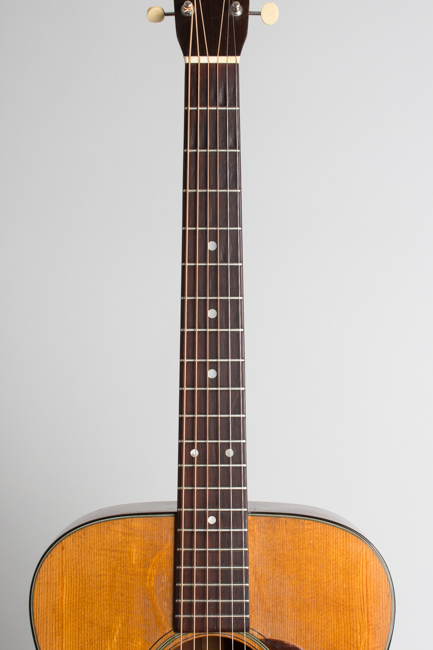 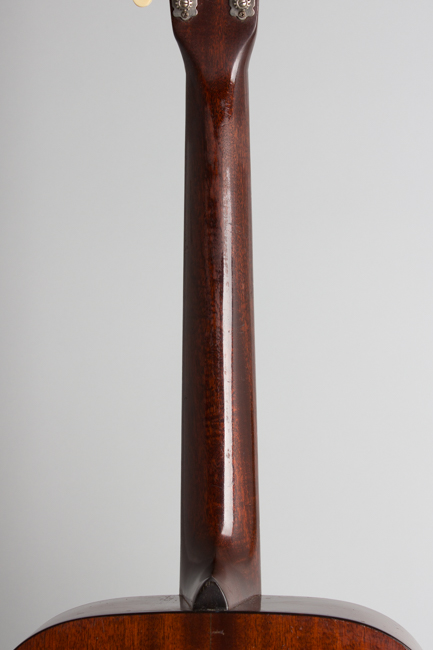 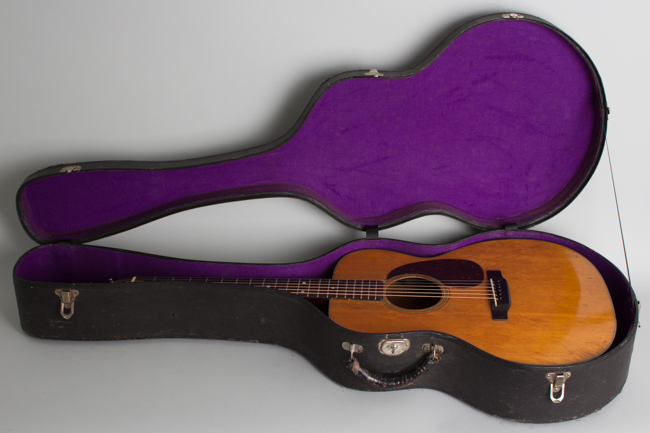 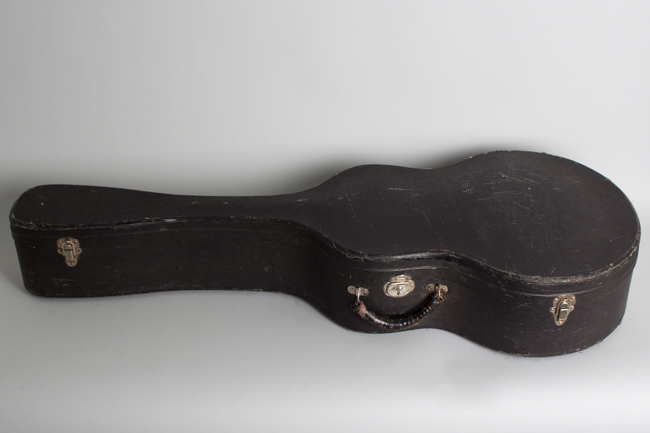 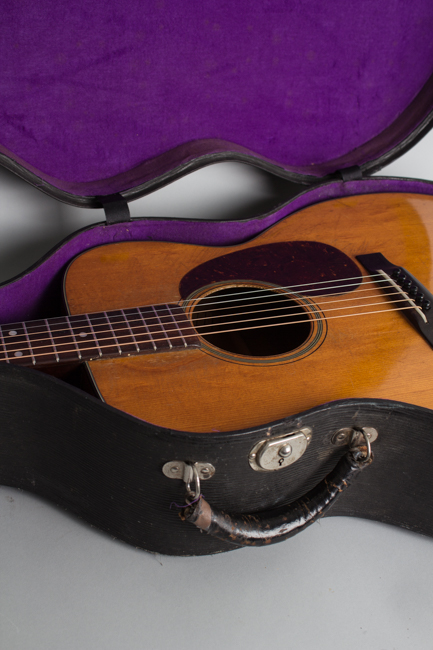 To many players and Martin fans, the vintage 000-18 constitutes one of the company's most propitious and beloved combinations of wood, wire, and inspiration. The light mahogany body coupled and spruce top make for a superbly responsive guitar; the 15" wide narrow-waisted 000 shape contributes both depth and clarity to the sound.

The 14-fret 000-sized body was introduced with the OM-18 in 1930; after 1933 nearly all Martin guitars were being built in this new "Orchestra Model" format so the OM designation was dropped, and this model simply designated the 000-18. The original OM-18 used a long 25.5" scale length, but Martin changed this to a slightly shorter scale in 1934. The 000-18 has remained one of the company's mainstays ever since.

This example was built in 1946, one of exactly 500 000-18s shipped just after the end of WWII. Unlike most other instrument builders Martin managed to keep up substantial guitar production during the war and the instruments of that era have their own character. This 000 has a features specific to this just postwar period, when much was in transition. The top is constructed in a transitional "tapered brace" mode; the traditional scallop-bracing had been discontinued in 1944 but the braces themselves are shaved thinner on the ends than later practice and are lighter than the typical 1950s and '60s models.

The superb and somewhat dramatic bear-claw figure Sitka spruce top seen on this guitar was a new feature for 1946, previously Adirondack spruce had been Martin's standard ingredient. After the war supplies of this wood were no longer available in quantity, as much of the existing supply had been clear-cut for aircraft use. Martin began using Sitka spruce from Alaska instead, which at the time was a more expensive expedient due to the greater shipping distances involved.

Other woods used are mahogany for the neck, back, and sides, with a rosewood fingerboard and bridge -- a change from the prewar ebony. The top uses tortoise celluloid for the pickguard and outside edge of the 5-ply binding, with a single layer for the back binding. The neck has a fairly slim profile with a soft but noticeable "V" along the spine, a style also typical of wartime models. There is no metal rod but an ebony reinforcement that has stayed straight and true, making this guitar among the lightest 000s out there. The fingerboard inlay is mixed size dots and the original tuners are unusual for Martin; openback Waverley machines with fluted bases, round bushings and long shafts topped by plastic buttons. These are more often seen on other makers' pre-war guitars and were likely a "floor sweep" purchase for Martin of anything that was available!

While not a particularly expensive guitar by 1946 standards, listing at $77.00 (plus case) the 000-18 still represented a substantial investment to most era players. In this just-postwar era professional grade guitars were in short supply, and Martin likely had their hands full building them; the even 500 listed as sold that year likely represents a self-rationed total.

The 000-18 is not a flashy guitar; the trim is discreet with tortoise celluloid on the body edges and a simple multiply sound hole ring. In classic Martin style, the elegant understatement speaks for itself. Despite its lack of glitz, this was a fully professional instrument and very popular with radio entertainers, most obviously the country acts common in the Southeast.

This 000 has seen use over the decades and shows some wear but is in excellent-playing condition and sounds truly wonderful. It excels as a fingerpicker's instrument but also has plenty of punch and clarity as a ringing rhythm machine as well. The combination of the light, non-scalloped Sitka top with the ebony-reinforced neck without the metal core creates a unique sonic character only found in the instruments from this early post-war period. Whatever the style of music one might prefer, mahogany flat-top guitars simply don't get a whole lot better than this.

This guitar remains in very fine original condition with some typical wear and minor repair. The finish overall shows typical dings, dents, and scrapes but nothing major. The top lacquer shows areas of wear, mostly strumming marks up near the fingerboard and around the pickguard. There is a worn-away area on the lower sound hole rim that has been lightly touched up. The bridge appears original; it has been shaved down slightly. The thin maple bridgeplate is original and unaltered. There appears to have been a nicely done neck re-set some time back.

The top and back have no cracks; there are several short grain cracks on both the bass and treble sides, two near the bass side of the end block, one near the bass side neck block, one near the bass side waist, one near the treble side waist and two more on the treble side lower bout, all sealed up. The headstock has some general wear. The finish is worn on the spine and sides of the neck but there are no heavy capo marks or deep dings along the surface, only a few small dinks. There is a bit of divoting to the fingerboard in the lower positions but the frets have only light wear and the guitar is a very fine player. This guitar feels superbly played in and is just a wonderful-feeling and sounding instrument. It is housed in a period hard case, of more archtop dimensions but likely original to the guitar which is somewhat worn but fully functional. Excellent Condition.
×