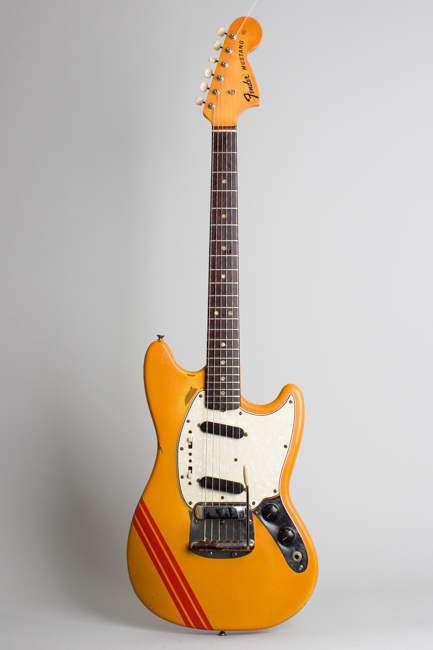 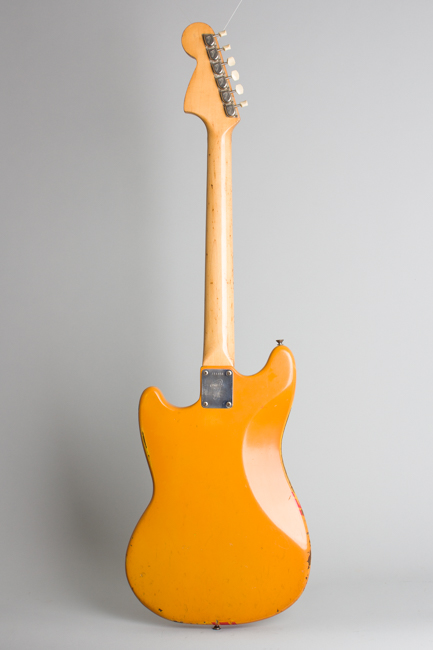 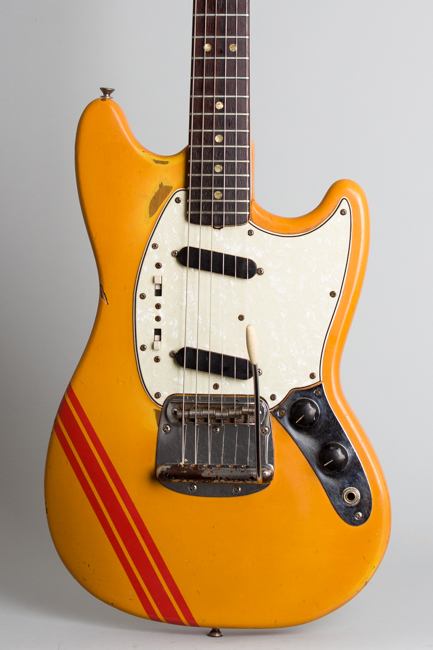 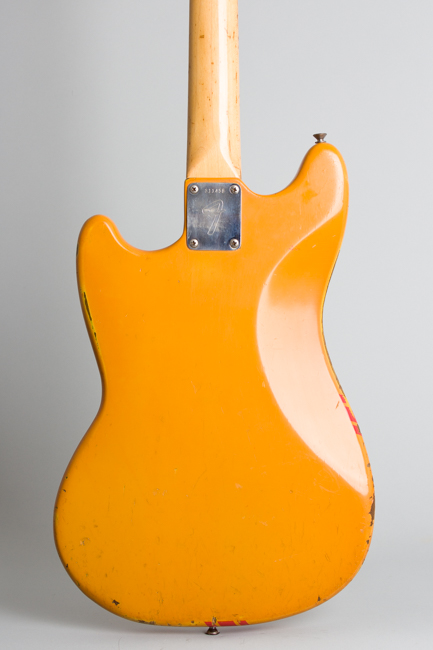 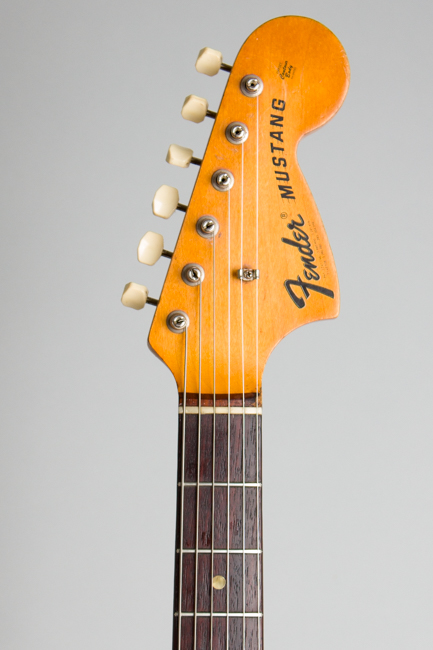 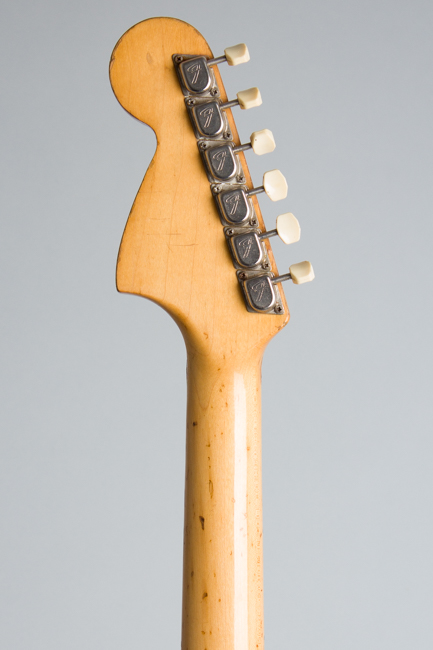 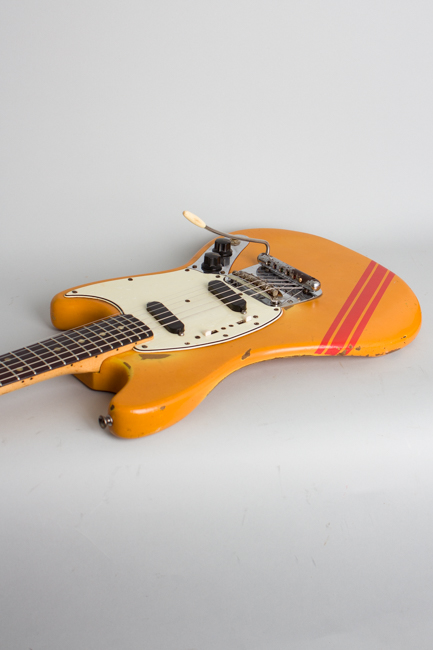 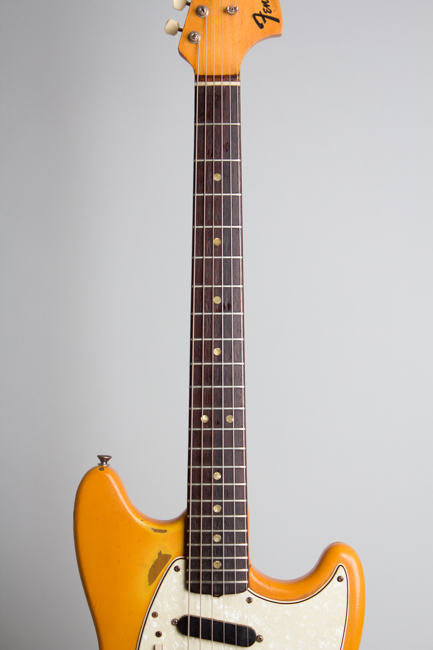 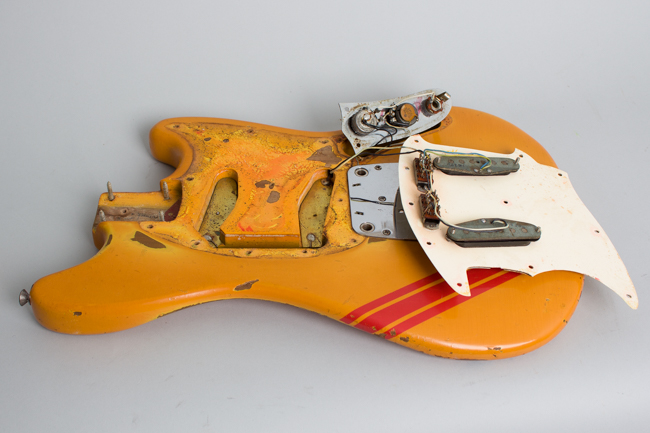 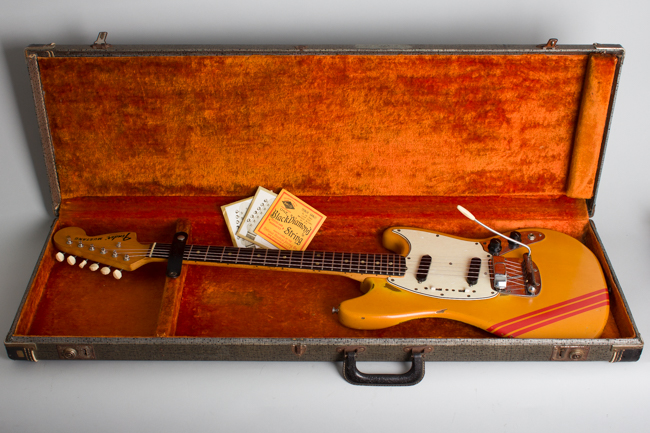 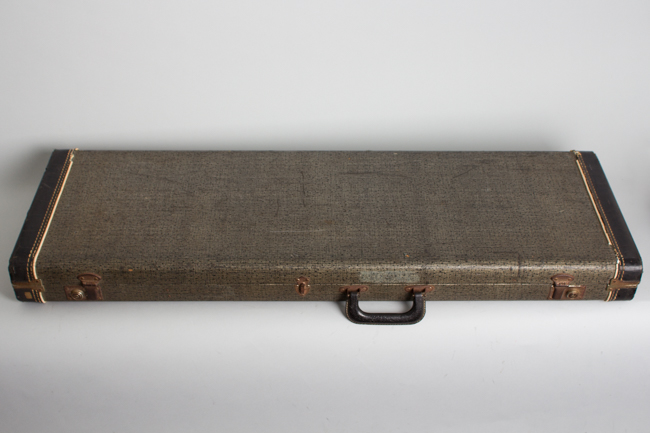 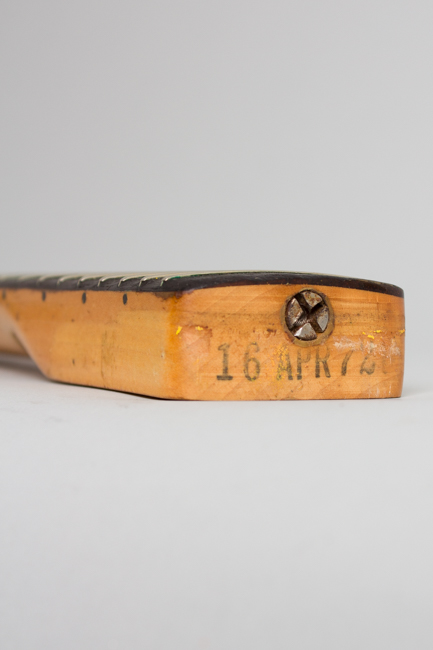 This 1972 Fender Mustang was built near the end of the run for the rather whimsical 'competition' version of the model, with the orange body finish and red 'racing' stripe on the body but a natural headstock. This orange variant is by far the rarest and most sought after of the Competition models, heavily outsold by the blue and red metallic versions. This one appears to have had an interesting life, but has been neatly restored to nearly-all-original condition.

The oddity on this guitar is the finish under the pickguard appears to have been, as far as we can tell, for lack of a better description burnt at some point. It's possible that the original celluloid pickguard simply aged and decomposed more rapidly than most, or that some accident caused it to actually combust. A few areas of the upper top near the pickguard edges have been sanded down somewhat, but overall the exposed finish is not too much affected. The pickups and electronics are all era correct for the guitar, we would have to assume the pickups, covers and switches are exact correct period replacements while the 5th week of 1972 pots appear original to the guitar. The pickguard mounted is also exactly correct, the switches are white instead of the expected black and are likely from an older tortoise pickguard Mustang.

Whatever happened long ago this guitar is now lovingly restored and an excellent player. The Mustang series in general was Leo Fender's last original design for the company that bore his name, and has endured as a classic in the student priced arena. The light, handy and great sounding Mustang has proven popular with many pro-level players from the 70s to today and endures as a garage band (and beyond) classic. Mustangs in general were made in large numbers but this orange Competition model is a particularly rare one, and despite its past mishaps a lovely and super vibey guitar still!

This guitar is in fine playing condition but shows signs of some sort of past pickguard mishap as noted above. There is wear to the finish overall including edge rubs, dings, dents and scrapes but this CBS-era orange livery is quite sturdy and has survived looking quite attractive nonetheless. A strap button hole was patched in the lower horn, so it may have been played upside down at some point! (note: we can't blame Jimi Hendrix for the possible torching as this guitar was not built until after his untimely death!)

As noted the electronics have most likely been reworked due to whatever damaged the top finish under the guard; if the pickups are not technically original to the guitar they are the exact correct era parts and sound great. The pots are original while the switches have almost certainly been replaced. The hardware is original including the hard-to-find bridge cover; the plating shows some wear and corrosion, which is quite heavy on the trem unit. The arm appears original or at least period but is bent up at a slightly odd angle.

There is a small patch to the wood just by the treble side of the nut, where it looks like a small piece was chipped out. The back of the neck has numerous small dings and dents but no heavy wear. The original frets are in good shape and the guitar plays very well and sounds as it should, despite whatever it has previously endured. This is a good player's example of this rare Mustang variant, complete in the original case. Very Good + Condition.
×